With Govt Yet to Decide on COVID Vaccines for Children, Doctors' Group Comes Out in Favour

The Indian Association of Paediatrics has issued a demand to vaccinate children in the face of new, more transmissible variants of the virus. 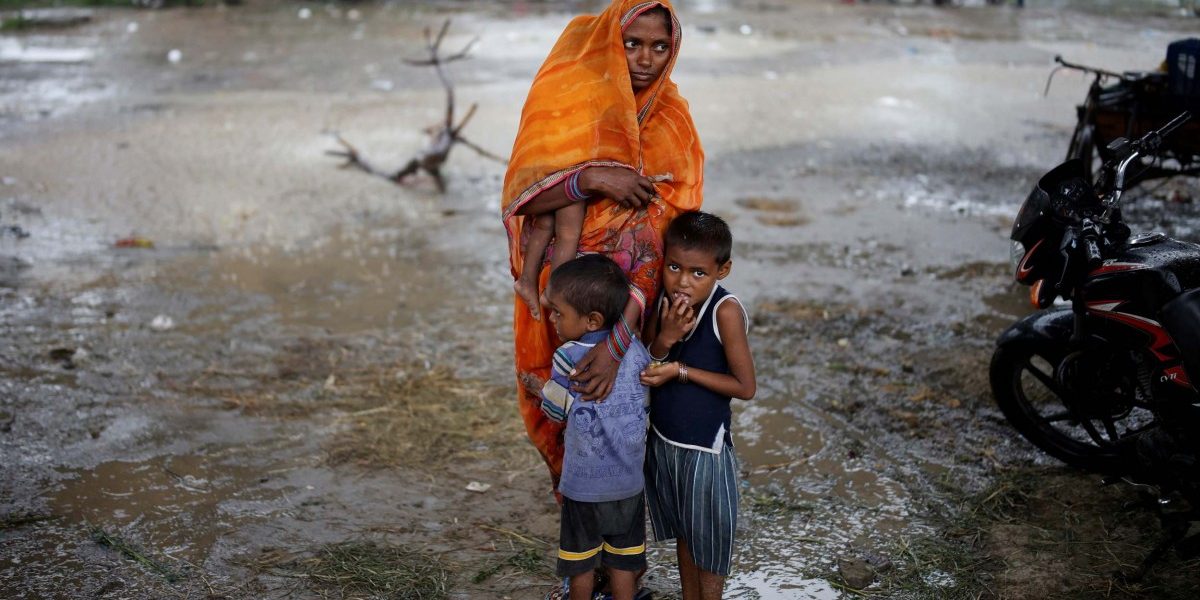 A woman stands with her children as she waits to receive a dose of COVAXIN coronavirus disease (COVID-19) vaccine manufactured by Bharat Biotech, during a vaccination drive organised by SEEDS, an NGO which normally specialise in providing relief after floods and other natural disasters, at an under-construction flyover in New Delhi, India, August 31, 2021. Photo: Reuters/Adnan Abidi

New Delhi: Even as the Union government is yet to begin COVID-19 vaccination for children in India, reports have surfaced from Gujarat that parents are taking their children abroad to have them vaccinated against infections of the novel coronavirus.

Times of India reported that in Gujarat, parents are making trips to the US, Israel and the UAE to have their children vaccinated, and to this end also spending large sums of money, instead of waiting for the Indian government to take a call on vaccinating people younger than 18 years. The parents quoted in the report said that they are resorting to such measures so they feel comfortable sending their children to school again.

“India is a free country and anybody can take such a step,” Piyush Gupta, the president of the Indian Academy of Paediatrics (IAP), told The Wire Science, adding that it wasn’t his place to comment on the ethics of these parents’ actions.

India’s drug regulator, the Drug Controller General of India (DCGI), approved the Zydus Cadila vaccine for children aged 12-18 years in August for emergency use. However, the paediatric vaccination drive never took off as the country’s vaccine advisory body, the National Technical Advisory Group on Immunisation, is yet to approve vaccination for children and adolescents.

There haven’t been any indications from the Union health ministry or the National Expert Group on Vaccine Administration for COVID-19 to start childhood immunisation either.

Meanwhile, the WHO has advised that vaccination of people of this age group shouldn’t be prioritised over that of adults. “Although benefit-risk assessments clearly underpin the benefit of vaccinating all age groups, including children and adolescents, the direct health benefit of vaccinating children and adolescents is lower compared with vaccinating older adults due to the lower incidence of severe COVID-19 and deaths in younger persons,” it said in an interim statement on November 24.

The rationale here is that children and adolescents have tended to get milder infections of the novel coronavirus than adults.

This said, many countries have already reportedly rolled out vaccination for this age group. Venezuela among them has approved vaccination for children as young as 2 years. In the US, children aged 5 years and above are eligible.

Most of these countries are using mRNA vaccines manufactured by Pfizer and Moderna, but some are also using Sinopharm, Sinovac and the Johnson & Johnson shots.

The WHO has also said that children can potentially carry the virus in their bodies, even if they’re less likely to develop COVID-19, so vaccinating children could help lower the virus’s transmission.

However, the WHO as well as other major organisations and experts have said that children should be last on the list of priority groups in need of vaccines, and that children should be administered vaccines only after members of all the other groups have been vaccinated. The latter includes the elderly, those who are immuno-compromised, those with comorbidities and healthcare workers.

Independent experts like Gagandeep Kang have also maintained that children should be vaccinated against COVID-19 only if there are doses leftover from vaccinating the adult population.

The IAP, however, has taken a different stand: that vaccinating children has become more important with the emergence of new variants of the virus. Its recommendations are to be published in the next issue of Indian Paediatrics, a journal of the IAP.

The Wire Science was able to access a preprint version, which says data gathered by the National Centre for Disease Control in February 2021 suggests that only 3.9% cases of COVID-19 occurred in people aged 0-10 years and 7.99% in those aged 11-20 years.

But, it continues, as “more transmissible variants” surfaced, the number of cases in children went up. “Although the proportion remained almost similar in both waves, the second wave involved almost twice the number [of cases among children] as in the first wave, with a consequent increase in the absolute numbers of children needing hospitalisation and ICU care.”

It also states that not all children can be viewed through the same lens. “Severe COVID-19 was present in 5.1% of children with comorbidities as compared to 0.2% in children without comorbidities,” it said, quoting this study.

Other than morbidity and mortality, infections of the novel coronavirus have also caused long-COVID among children in the form of multisystem inflammatory syndrome in children (MIS-C), cases of which have been reported from India as well. Children with MIS-C have been known to require hospitalisation and at times even ICU care.

According to the IAP, there has been no scientific work from India to estimate the fraction of paediatric COVID-19 cases that led to MIS-C but that the global data suggests it ranges from 0% to 27%.

Against this backdrop, plus the associated risk of children becoming carriers of the virus and spreading it to others, the IAP is demanding paediatric COVID-19 vaccination, in the following order of priority:

In India, Covaxin has also submitted clinical trial data pertaining to children to the DCGI, and the latter’s decision is awaited. Covovax, a subunit vaccine developed by Novavax, is currently undergoing phase 3 trials for use among those younger than 18 years. And then there is the Zydus Cadila vaccine that has been approved for use among those aged 12-18 years.