There is no sizeable increase for any of the schemes when it comes to allocations, while the continual wrecking of FCI's finances don't augur well for the future of PDS. Notwithstanding its positioning, budget 2020 in effect fails on many counts to respond to the nutrition challenge in India. Photo: IFPRI -IMAGES/Flickr (CC BY-NC-ND 2.0)

Despite the annual embarrassment of India scoring a poor rank on the Global Hunger Index, nutrition and hunger hardly merit a mention in the budget speeches of our finance ministers.

The last time there was anything related to tackling malnutrition among women and children was in 2014-15 – the first budget of the Narendra Modi government – where Arun Jaitley announced that a national nutrition mission would be launched.

Almost six years later, in Saturday’s speech, Nirmala Sitharaman highlighted the government’s efforts for mother and child nutrition and stated that she proposes to “provide Rs 35,600 crore for nutrition-related programmes for the financial year 2020-21”.

While this gave an impression that there has been some significant increase in the budgetary allocations for nutrition, as seen in media reports since Saturday, the question to be asked is whether there indeed has been any enhancement. Even more important, what does this budget hold as a vision for improving nutrition and food security for all?

The National Food Security Act (NFSA) provides a basket of entitlements throughout the life-cycle and the government runs a number of schemes whose specific aim is make a dent on hunger and malnutrition. The most important of these is seen to be the ICDS (Integrated Child Development Scheme) which among other pre-school, health and nutrition services also provides supplementary nutrition to young children, pregnant and lactating women and adolescent girls. The POSHAN abhiyan, a flagship initiative of the present government and mentioned in the budget speech, is also focussed on the anganwadi services while it aims to achieve convergence with various other efforts that influence nutrition outcomes.

While the ICDS comes under the Ministry of Women and Child Development, mid-day meals in schools for children up to class 8 implemented by the HRD ministry is also included in the NFSA.

Also read: The Good, the Bad and the Impossible of the 2020 Union Health Budget

The combined allocation for these schemes in the present budget adds up to Rs 35,600 crore and we can safely assume that this is what the minister was talking about as there is also no new scheme or budgetary line related to nutrition, in the budget documents that have been put out. There are some existing schemes such as the scheme for maternity benefits, Pradhan Mantri Matru Vandana Yojana (PMMVY), which provides a cash benefit of Rs 5,000 to pregnant women for the first live birth which doesn’t seem to have been added. 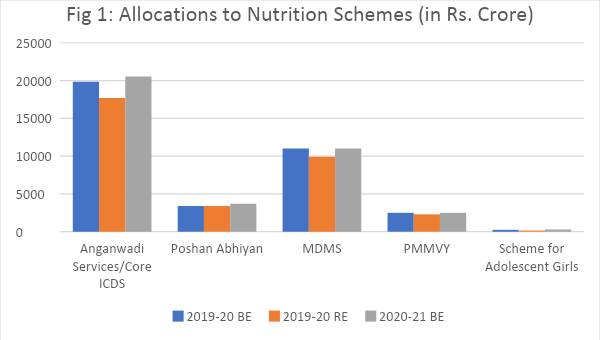 Looking at the budget allocations for these schemes in comparison to last year, it is seen that there is no sizeable increase for any of these schemes. In fact, compared to the BE figures of 2019-20 assuming an average inflation of 4.5%, in real terms there is a slight decline in the budget allocated for anganwadi services, mid-day meals and PMMVY. However, compared to the revised estimates for last year, an increase is seen, the highest being 28% increase for anganwadi services.

Here, it must be noted that even the allocated amount for anganwadi services last year was understood to be inadequate by most experts. It has been argued for many years that if the anganwadi services are to adequately provide all the services that they are supposed to, there needs to be a huge boost in the investment into the scheme. In many parts of the country anganwadi centres continue to operate from dilapidated buildings or have no buildings, the teaching-learning material is not regularly replenished and most importantly, the anganwadi workers and helpers are paid meagre honorariums (central government contributes Rs 4,500 per month and in many states that is the amount that the workers receive, viz. not even minimum wages). For instance, the budget briefs by Accountability Initiatives finds that about 30% of the supervisory positions in anganwadi services are vacant, a quarter of the centres do not have toilet facilities.

Reduced revised estimates for these crucial nutrition schemes are also worrying because this means that these already under-resourced programmes have been suffering from lack of funds resulting in irregular and poor delivery. The PMMVY is another case in point, which by design excludes more than half the pregnant women by restricting benefits to the first child. Even the small set of women who are eligible have not been receiving their cash entitlements in time, as shown recently by the ‘Jacha-Bachcha’ survey.

The finance minister in her speech made a special mention of the Poshan Abhiyan launched in 2017-18 and repeated twice the achievement of equipping six lakh anganwadi centres with smart phones to upload the nutritional status of more than 10 crore households. While introducing smart phones to aid better monitoring as well reducing the burden of record keeping on anganwadi workers is a desirable objective, it also has to be seen in the larger perspective.

Also read: Budget 2020: Does the Govt Intend to Reduce Coverage Under the Food Security Act?

An analysis by the Accountability Initiative, shows that, “Information and Communication Technology enabled Real Time Monitoring (ICT-RTM) for the development and setting up of Common Application Software (CAS) and expenditure on components under behavioural change such as advocacy and Community-Based Events (CBE) together comprised 72% of total expenditure”. While these are also important components given the poor state of nutrition in the countries, it also shows that funds have not been forthcoming for the actual running of programmes on the ground.

The PDS which provides subsidised foodgrains to 67% of the population (as mandated by NFSA) should also been seen as one of the schemes contributing to food security and therefore nutrition. In the current context, where unemployment is high, wages are low and food inflation has been increasing, many media reports show that the foodgrain that people are getting from the PDS is, for many poor households, the only source of assured food. The PDS provides only 5-kg of cereals per individual, which is not sufficient but often is what is keeping families from starvation. On the other hand, the foodgrain stocks at the FCI godowns have once again been burgeoning with the stocks of rice and wheat as of January 2020 being over 75 million tonnes whereas the buffer stock norm is 21.4 million tonnes.

In such a situation one would have expected an expanded PDS covering a larger number of beneficiaries and/or increasing the entitlement per individual. Further, given the data on poor diets in Indian households, in these times of rural distress, it would have made sense to also expand the PDS basket to include pulses and cooking oil as well as exploring ways of making fruits and vegetables available at stable and affordable prices.

However, the budget speech makes no mention of the PDS and the budget itself shows signals that this government is not interested in strengthening the PDS, rather all efforts seem to be towards undermining and dismantling it. The food subsidy which reflects the amount paid by the government to FCI for procuring foodgrains and issuing them at subsidised prices to the PDS has been reduced from Rs 1.8 lakh crore in 2019-20 BE to Rs. 1.15 lakh crore in the current budget. The revised estimate for 2019-20 was also a much reduced 1.08 lakh crore.

This indicates two things – first, the government is planning to continue to bleed the FCI by not paying up the entire subsidy amount. As it has been doing over the past few years where it is transferring a part of the food subsidy in the form of loans from the National Small Savings Fund (NSSF) (see figure 3 below). This only increases the interest burden in the long run while in the short term allows the government to get away with showing a lower expenditure burden and therefore a smaller fiscal deficit. 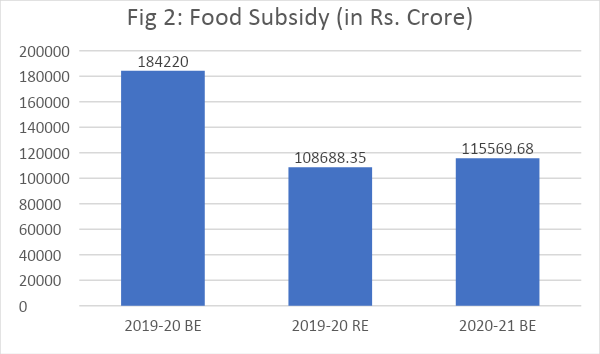 *This part does not get reflected in the budget documents.
Source: Economic Survey 2019-20.

Second, this underhand manner in which is the FCI is being pushed into losses raises concerns that the government wants to move towards dismantling the FCI and the PDS, in line with the kind of privatisation efforts that have been announced in this budget, of the LIC for example.

An indication that this is the direction in which it seems to be thinking comes from the recommendation that Economic Survey makes: “The coverage of NFSA needs to be restricted to the bottom 20% and the issue prices for others could be linked to the procurement prices. A better alternative would be giving income transfers to consumers through Direct Benefit Transfers (DBT)” (p.86, Vol. 1, Economic Survey 2019-20).

The debate of replacing the PDS with cash transfers is an old one, that keeps coming up regularly – there are a number of reasons including the importance of PDS in ensuring basic household food security, problems of access, preference and inflation-indexing, the threat to the MSP system in the absence of PDS and so on which need to be considered. What would be more productive would be to discuss further reforms in PDS and procurement such as decentralised procurement, inclusion of millets, pulses and cooking oil, de-privatisation of fair price shops and strengthening mechanisms of transparency and accountability which would not only contribute to making the PDS a more efficient system but also increase its contribution to improving household food and nutrition security.

Notwithstanding its positioning, budget 2020 in effect fails on many counts to respond to the nutrition challenge in India. The direct programmes which address the multidimensional nature of malnutrition including the ICDS, mid-day meals, PMMVY and Poshan Abhiyan are underfunded and at the same time PDS which contributes to basic food security is sought to be undermined.

The government seems to be oblivious to the situation of hunger in the country. It further seeks to create an illusion of plenty by arguing in the Economic Survey in its chapter on ‘Thalinomics’ that food affordability has increased in the last few years. This chapter is based on a flawed methodology where it compares food prices as a proportion of incomes of workers in organised manufacturing who comprise less than 5% workers in India and does not take into account that wages for the majority have been stagnating and unemployment is at its peak.