The state has a shortage of facilities and doctors, while its testing strategy has also been called into question. Patna: In the last week of March, when the first COVID-19 case was reported in Bihar, the Nitish government had declared the state’s Nalanda Medical College and Hospital (NMCH) as a dedicated hospital to treat people with the disease. Later, two more medical colleges were allowed to treat COVID-19 patients.

But after the Centre asked all the state governments to select a medical college and hospital as Centres of Excellence (CoE) in COVID-19 management, the Bihar government ignored its own medical colleges. Instead, it chose the All India Institute of Medical Sciences (AIIMS), Patna, which is under the Union Ministry of Health and Family Welfare.

This decision bears testimony to the severe lack of infrastructure in the state government-run hospitals.

According to a Times of India report on August 10, Bihar State Health Society director Manoj Kumar wrote a letter stating, “The centre of excellence will form an interactive ecosystem enabling for two way communication to understand and resolve clinical concern on patient management and enhance the capacity development by disseminating resources to all dedicated facilities.”

A majority of government officials and politicians who have contracted COVID-19 chose AIIMS-P for treatment instead of any state government funded hospitals, which also indicates that the institute has better facilities. So, questions are being asked about why the government has not strengthened the infrastructure of the state hospitals in the past.

Doctors upset with the decision

Doctors in the state are upset with AIIMS Patna being selected as the CoE. They term the government’s decision “shameful”, asking why it “ignored” the 95-year-old PMCH, 50-year-old NMCH and Anugrah Narayan Magadh Medical College and Hospital.

Dr Sunil Kumar, secretary of the Indian Medical Association (Bihar Chapter) told The Wire, “It is shameful that Bihar government could not find its own decades-old medical colleges fit for CoE and it had to designate AIIMS Patna, which came into existence just eight years ago.”

“It is only because the state could not strengthen the infrastructures of these hospitals. The state’s medical colleges have a huge infrastructure gap. There has been minimal improvement in all these years,” he said.

Kumar added that the lockdown was imposed to help states prepare for the pandemic. “But the Bihar government did not do enough. Many states prepared COVID-19 centres with 50-bed capacities  in every district, but Bihar could not.”

The shortage of basic amenities in the health sector in Bihar is reflected on the ground.

NMCH, Bihar’s first COVID-19 dedicated hospital, has about two dozen vacancies for doctors. NMCH superintendent Dr Vinod Kumar Singh told The Wire, “Yes, we lack infrastructure. We do not have the same facilities as AIIMS Patna,” he said.

“The decision to select a CoE was by the state government, so I can’t comment on that. But it is a fact that we have a weak infrastructure.”

Vinod Kumar Singh was appointed as the superintendent on July 21. Earlier, Dr Nirmal Kumar Sinha was the superintendent. The Central team which came to review the status of COVID-19 management in Bihar in July also visited NMCH. It is believed that the team was unhappy over the preparations at the hospital. The rumour was that Sinha told the Central team that the state government was not providing facilities, which irked the Nitish Kumar government. He was removed as soon as the Central team left Bihar. Apart from that, videos from the hospital showing dead bodies next to COVID-19 patients went viral.

A relative of a COVID-19 patient admitted to NMCH told The Wire that his uncle died due to the hospital’s negligence and lack of facilities.

He said, “Proper arrangement for COVID-19 patients were not made at the hospital. The food for patients was kept near dead bodies. Doctors and nurses were not available to check up on the patients. We only had to take care of my uncle.”

The patient was a resident of Motihari and was admitted to NMCH in the second week of July.

His relative claimed that on July 14, the oxygen cylinder started leaking. “He was wearing an oxygen mask. We somehow tried to fix the leakage of the cylinder. He died a day after this. NMCH is a COVID-19 dedicated hospital, but the system in place is very poor.” 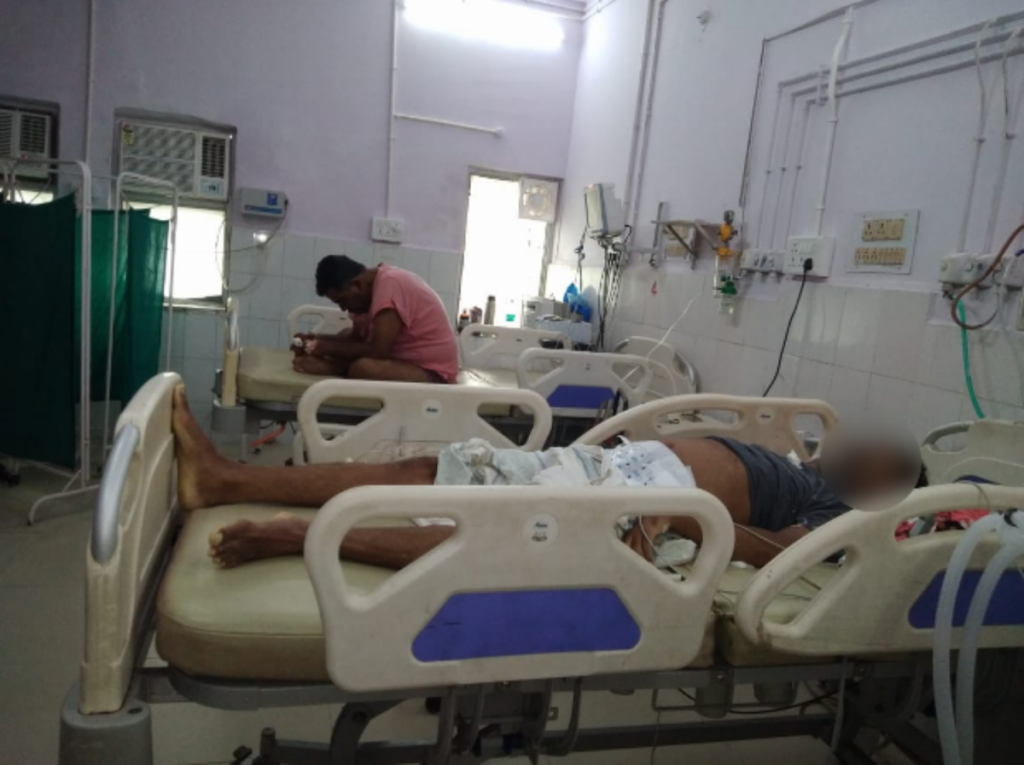 Speaking on condition of anonymity, a doctor from PMCH told The Wire that there is a shortage of doctors. “But even the doctors who are working do not have proper equipment. The quality of personal protective equipment (PPE) kits which we received was poor. We can’t spend much time in the chamber wearing the PPE because the chambers do not have air conditioning.”

The shortage of basic facilities is not limited to medical colleges. Dedicated COVID-19 centres set up at the primary level also do not have facilities.

An additional primary health centre (PHC) at Samastipur was made a COVID-19 Centre in July itself. The PHC has a capacity of 15 beds, but it does not have any facitlies apart from oxygen cylinders, pulse oscillators and nebulisers. A doctor posted at PHC told The Wire, “The centre does not have facilities to treat patients in the case of an emergency.”

Higher percentage of doctors dying due to COVID-19

Recently, the IMA (Bihar Chapter) shared data on the deaths of doctors due to COVID-19, which indicated that Bihar had the highest death percentage among all the states.

Taking to The Wire, IMA’s (Bihar Chapter) vice president Dr Ajay Kumar said, “We have analysed the data till August 7. By then, Bihar recorded 388 deaths due to COVID-19. 18 among them were doctors who were on duty. This means doctors account for 4.3% of the deaths.”

“The national average for deaths of doctors is just 0.5%. Tamil Nadu, Maharashtra, Gujarat, Karnataka and Delhi are among the many states which have a very low percentage of deaths,” he said.

Sunil Kumar said that out of 12,000 designated posts of doctors, only 4,500 doctors are working. Many among them are above 60 years of age, he said.

Dr Ajay Kumar said that more than 400 doctors in Bihar had contracted COVID-19 and a large number of them are elderly and therefore have a higher mortality risk.

Sunil Kumar says, “Most of the doctors who died are above 60 years. We have demanded the government to ensure that elderly doctors are not given charge of coronavirus wards.”

According to the report, 59.7% of specialised doctors in district hospitals are vacant while 50.7% of ANM (auxiliary nurse midwife) posts are lying vacant in community and primary health centres.

A block-level government doctor in Rohtas told The Wire that around 200 COVID-19 patients are in home isolation, but physical verification of their status is not being done daily due to a lack of doctors.

Principal health secretary Pratyay Amrit did not answer The Wire‘s calls, while the State Health Society’s director Manoj Kumar said he was busy. The Wire has emailed them a questionnaire about Bihar’s preparedness to handle the pandemic. The story will be updated as and when their response is received. A woman gets tested for the coronavirus at a camp in Patna. Photo: PTI

On March 6, testing for COVID-19 started in Bihar with just 500 kits. Later, testing facilities were established in other hospitals. But even after this, the rate of testing did not pick up, as a result of which many cases were not identified.

In the third week of July, the Central team which came to Bihar had warned the state government that due to less testing, there is a possibility that the situation may become uncontrollable.

If calculated in percentage, then only 8.13% of the samples were RT-PCR tests. The rapid antigen tests have a higher probability of returning a false negative, and therefore, the ICMR has advised that RT-PCR tests should be preferred.

Apprehanding a false negative result, ICMR said that if a rapid antigen test report is positive, the report is considered to be true. If the report comes negative, then the person should be tested again through the RT-PCR technique.

Highlighting the drawbacks of the rapid antigen tests, a district doctor said that doctors are finding it difficult to convince people to get tested twice. “If a person’s rapid antigen test is negative, when we ask them to come again for an RT-PCR test, most people do not appear. They think because their first test (through antigen kits) report is negative, there is no ned to get tested again.”