Underpaid and Without Protection, 15 ASHA Workers Died During COVID Second Wave in Bihar

The state’s apathy in dealing with these frontline workers has not abated even during a high-risk pandemic. 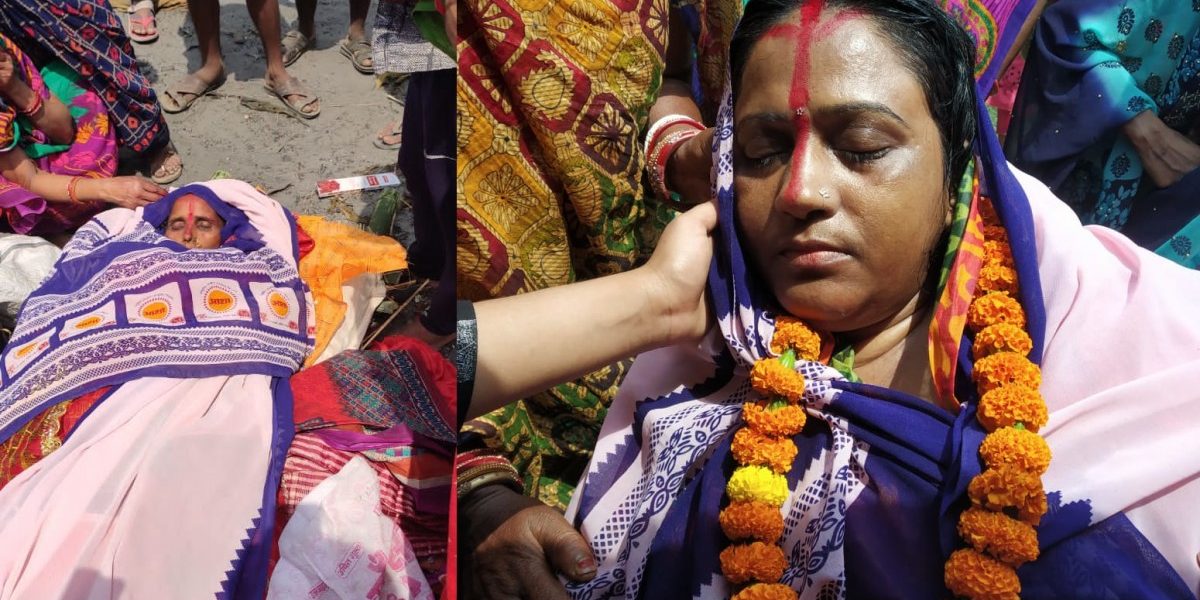 This is the first article in a two-part series on how ASHA workers in Bihar were affected by the COVID-19 pandemic.

Patna (Bihar): On April 14, 45-year-old Poonam Marandi, an Accredited Social Health Activist (ASHA) in Bihar’s Banka district, complained of a headache and later fainted. Her relatives rushed her to the nearby Katoria Hospital for treatment and asked the staff to test her for COVID-19 – but the hospital refused to do so until she had been admitted. A few hours later, Poonam, who is a member of the region’s Adivasi community, was declared dead, while the hospital admission procedure was still ongoing. 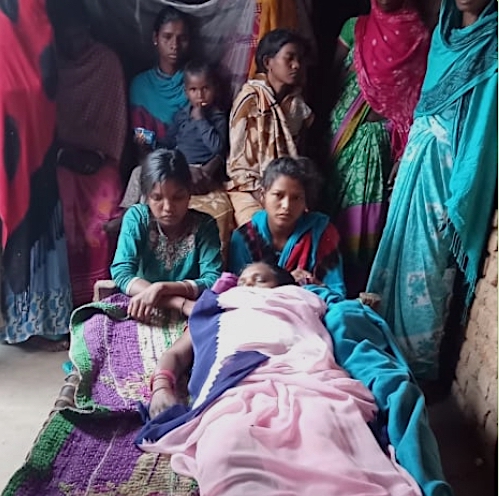 The family of deceased ASHA worker Poonam Marandi from PHC Chandan in Banka mourn her death. Source: Family of the deceased

Almost three months since her death, none of Poonam’s now-orphaned children have received any support. Poonam was the only earning member of her family of six, the youngest of whom is 14, but her family says they haven’t been granted any compensation despite filling the requisite forms. Sonelal Murmu, a relative and neighbour, told The Wire, “Her husband passed away long ago. She has four daughters and one son – they are now orphans. Only one of her daughters is married.”

Poonam died while on duty, and she isn’t the only one. The Bihar ASHA Workers’ Union estimates that over 15 ASHA workers have died during the second wave of the pandemic in the state.

Not only are the families of affected frontline workers being denied due compensation, there is also a lack of reliable public data on the actual number of deaths due to the virus. While last year Prime Minister Narendra Modi promised Rs 50 lakh insurance cover for the nation’s frontline workers (under the Pradhan Mantri Garib Kalyan Package), a report suggests that only 0.013% of healthcare workers have received these benefits till now.

As of July 2021, the Indian Medical Association reported that over 776 doctors had died in India’s second wave. Bihar, with 115 doctors’ deaths, had the highest share among all states. At the same time, there is no such reliable count of the deaths of scheme-based healthcare workers (like ASHAs) who died across India. Unlike doctors, ASHA workers’ jobs are irregular and of a semi-voluntary nature, though they have been asking for government regularisation for years now. The last official figure was in a response to a question in the Rajya Sabha, where the health ministry’s minister of state Ashwini Choubey (also an MP from Bihar) said that 162 doctors, 107 nurses and 44 ASHA workers had died of COVID-19 as of January 22, 2021. After the devastating second wave, however, there has been no update on this number.

*Out of 16 deaths in the list, 15 occurred between April and May 2021, the second wave of COVID-19 in India. Source: Bihar ASHA Workers Union and newspaper reports.

** Happened prior to the second wave, but circulated as part of the current list of deaths.

No masks or gloves, ASHA workers treated as disposable

In the last week of April, 42-year-old Madhu Devi went to assist with a childbirth in West Champaran district’s Majhaulia public health centre. It was after this that she began developing symptoms of COVID-19.

Her husband, Surender Shahi, told The Wire, “After she came back, she began to develop breathing problems. We tried to cure it at home with steam inhalation and local medication. Then we took her to the Manjhaulia PHC.” Shahi says that the very PHC that Devi had worked in for years did not even test her properly for COVID-19. “They just swabbed her nose; within 30 seconds they wrote ‘negative’ and told us there is no COVID-19. What kind of a test is that?”

There have been enough reports to suggest that RAT (Rapid Antigen Tests) for COVID-19, especially in the second wave, were ineffective and often gave false negatives. The overdependence on this kind of testing (rather than the more reliable RT-PCR testing) created a further hurdle in identifying infected people. There have been enough questions raised about the testing mechanism in Bihar, in which tests reports were delayed and mismanaged, or false testing on paper conducted.

Devi’s nephew Ravikant Shahi added that they soon put her on oxygen support in the same PHC, as her oxygen saturation levels dipped to 65. The family claims that the oxygen supply lasted for “only four-five hours”, following which they were told to take Devi to Bettiah town. Even before they could move her, she passed away on May 7. “Even the local ambulance driver outside this PHC at Majhaulia had died of COVID-19. We had just managed to arrange some transport when she breathed her last,” Ravikant said.

Devi was the sole breadwinner for her family. Her husband is a manual labourer, but has been getting barely any work since the start of the pandemic. As an ASHA worker, she reportedly earned around Rs 2,000 each month. Today, the Shahi family has nothing left. “Nothing has been arranged for us, and no one here is guiding us or even telling us what to do, what to fill, how to seek aid!” said Surender. Surender Shahi, husband of late ASHA worker Madhu Devi, mourns the death of his wife. On being asked to share a photo of the ASHA worker, he specifically shared this.

A 2020 Oxfam survey conducted across the states of Uttar Pradesh, Odisha, Bihar and Chhattisgarh revealed that at least 25% of ASHA workers in these states did not receive any masks, and only 62% received gloves. In Bihar too, according to the local union, ASHA workers weren’t provided with even basic protective equipment despite the high-risk situations they were working in.

For Bihar ASHA Workers’ Union president Shashi Yadav, the number of ASHA workers’ deaths (despite most being vaccinated with at least one dose) comes as no surprise. Though a vaccination drive for ASHA workers started as early as January, Yadav said, “Some women couldn’t take both doses in time and some faced hassles even in getting to the teeka centres [because no transport was organised].” The lack of facilities, she believes, playing a big role in the number of deaths. “The State Health Department says that ASHAs will not work without masks, gloves and sanitisers, but the ASHAs who go to conduct field surveys of coronavirus-positive patients are not given any of this!”

In a May meeting held online for ASHA workers from 16-17 districts of the state, Yadav said that all of the women said they hadn’t received any protective gear. This was around the peak of the second wave, when the media was reporting around 75,000 unaccounted deaths in Bihar and the state government confirmed over 9,429 people died during the same period.

Meanwhile Kaimur district’s Shamsha Bibi from the Bhabua PHC said the ASHA workers had “no choice”. She noted the complete absence of hospital-provided masks, sanitisers and gloves. “We just bought our own gloves and sanitiser for our two-week-long survey [of COVID-19 patients],” she said, adding that her co-worker in the district, Geeta Devi, also died during the second wave.

Geeta, an ASHA worker in the Chainpur PHC of Kaimur, had gone to deliver a child before she began developing symptoms of COVID-19. Her brother then took her to Bhabua town, where no hospital was ready to admit her or even test her for COVID-19. Her husband, Rajvansh Singh, a factory worker in Solan, Himachal Pradesh, reached home and tried contacting the PHC she worked at. He pleaded for help, but her colleagues at the PHC, Chainpur expressed helplessness due to the lack of available beds, oxygen and staff to take in more patients. Later, he was able to get her admitted in a private hospital, where the doctors put her on oxygen support and started her treatment for COVID-19. On April 24, she passed away.

Sangeeta Sangam, an ASHA facilitator in the Samastipur PHC, tested positive for COVID-19 in April after coming in contact with an infected patient during a vaccination drive. She later required an oxygen cylinder but failed to get it in the PHC she worked in, and was forced to get admitted to a private clinic. Not only was she burdened with the medical bill of her treatment in the private clinic, she was also denied payments as an ASHA worker after she was infected. She is still trying to access guidelines about the payments owed to her.

She said, “The authorities treat us like bonded labour. Officially we work only 20 days a month but unofficially we have to work all 30 days to get our payment. Since I’m also vocal about our problems, I get systematically targeted and this is also reflected in the lack of any support provided to me when I tested positive. Now they have also denied me any payment, saying I was ill and was unable to work.”

“My bank account is now empty, I spent all my savings on my COVID-19 treatment. Since I’m also not getting last month’s payment, it is difficult to survive.”

The irregular and poor wages are offset by other exploitation, such as the lack of amenities. “We had demanded transportation facilities. But no transport was given. They [ASHA workers] were all expected to go by themselves to paste awareness posters in people’s homes,” union leader Yadav said. Highlighting a case where an ASHA worker struggled to arrange for transport, Yadav added, “Recently in Rohtas district, Munni Khatoon came just five minutes late for a survey and was given a show-cause notice! We protested that she had no transport to go from one place to another.”

For Dinkar Prasad, whose colleague Sunita Kumari died, the poor wages and exploitation seem to play an obvious role in the number of deaths. Hailing from Lakhisarai district’s Suryagarha PHC, Kumari died on May 1, after showing COVID-19 symptoms. “Sunita was told to go for a survey, and after a while, she fell sick. She was taken to the hospital by her husband. Much later I found out that she had died,” said Prasad, who works as a doctor.

Adding how Kumari was paid no more than Rs 3,000-4,000 monthly, Prasad noted that even the increment worth Rs 1,000 which was promised by the government to ASHA workers remains unpaid. Yadav agreed, adding that they even submitted a memorandum to IAS officer Manoj Kumar, executive director of the Bihar Health Society and health minister, but to no avail. “ASHAs are piece-rate workers, but the Bihar government hasn’t paid the increment of Rs 1,000 extra per month as promised. We do not earn any fixed or minimum wage. Many earn less than Rs 3,000 per month. If in some places there are a few deliveries or vaccinations, then it can be a maximum of Rs 5,000-6,000 at best.”

The Wire wrote to Kumar asking why the incremental payments had been held up. This article will be updated when he responds.

For a long time now, many ASHAs across the country have been protesting and demanding a Rs 18,000 monthly wage. Instead of the government listening to the demands of these essential workers and making their lives easier, they have been left to fend for themselves even in the riskiest of situations.

Though some people raised objections of photos of corpses being shared during the second wave, families of the deceased ASHA workers we spoke to all wanted to share these very photos. Whether this is an act of memorialising these women, or of holding on to injustice of their precarious lives, we do not know.