Bihar: Who is Responsible for the Death of 100 Children?

Most ASHA workers complain that there isn't enough ORS to give affected children in villages.

Muzaffarpur's government-run Sri Krishna Medical College and Hospital (SKMCH) has been taking in the most number of AES patients. Photo: Umesh Kumar Ray

Muzaffarpur (Bihar): Promila Devi, a resident of Ganesh Sirsiya village in Bihar’s Motihari, had organised a puja at her home last Tuesday. At around 11 pm, she gave her four-year-old daughter Priyanshu a meal of roti and bhujiya before putting her to sleep.

The day had been hectic, so Promila woke up late the next morning. But when she tried to wake Priyanshu up, Promila realised that her daughter was not opening her eyes and her body was stiff.

With her mother-in-law, Promila rushed Priyanshu to one hospital after another, but no doctor was available in any of them. Finally, at a hospital where doctors were present, Priyanshu was only given temporary medication and Promila was asked to take her to Muzaffarpur’s government-run Sri Krishna Medical College and Hospital (SKMCH) as quickly as possible.

Promila booked an ambulance for Rs 4,000 and brought her daughter to Muzaffarpur, where doctors put an oxygen mask on Priyanshu and admitted her to the paediatric intensive care unit (ICU).

Promila’s wait outside the ICU has naturally been an anxious one. Her husband and the only man in her family, Mohan Ram, is a labourer in Punjab, so the sole burden of responsibility of her daughter’s treatment is on her.

“She ate litchi the previous morning but only ate roti-bhujiya at night,” she says, adding, “When I tried to wake her up in the morning, she did not respond and behaved strangely. We were terrified.”

Promila’s fears have grown after she came to know of the ‘deadly fever’ that had, by June 17, claimed the lives of 100 children in Muzaffarpur alone.

Medically known as Acute Encephalitis Syndrome (AES), summer sees outbreaks of what locals call ‘chamki‘ fever in the region. Areas which come under Bihar’s Tirhut division, including Muzaffarpur, Vaishali, Shivhar, Poorvi and Western Champaran are notorious for annual AES outbreaks in May and June.

As the likes of Promila fear, the fatal disease has once again struck the region this year. But owing primarily to government negligence, more children have died of the fever this year than in any of the previous four years. The toll continues to rise even now. 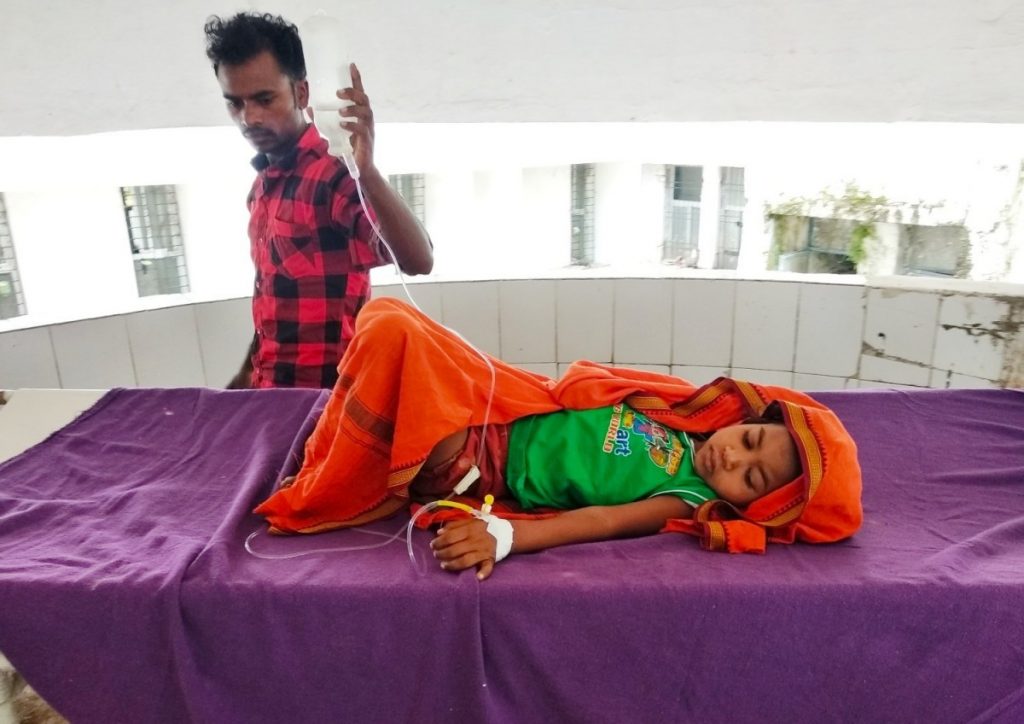 As the numbers increased exponentially, what was initial reluctance by health officials to link the deaths to AES gave way to chief minister Nitish Kumar expressing grief and announcing ex gratia compensation of Rs 4 lakh to the families of each of the deceased children.

According to a press release issued by Bihar’s health department last Sunday, most of the deaths have occurred due to hypoglycaemia this year. But government officials have avoided acknowledging that hypoglycaemia is one of the dozen diseases that fall under the umbrella term of AES. When affected by hypoglycaemia, blood sugar levels in children become excessively low.

Nitish later said during a Jan Samvad programme, “Every year before the onset of monsoon, this disease (AES) wreaks havoc. It is a matter of concern that every year children die because of it.”

Meanwhile, the SKMCH management has opened two more wards in addition to the existing paediatric wards to tackle the emergency situation. Fresh cases are now being admitted to these wards while those children who are recovering are sent to the paediatric ward on the ground floor.

The paediatric ward has the largest number of patients where due to space shortage, patients are forced to share beds. Some children are also being admitted to the Kejriwal Matri Sadan.

Superintendent of Muzaffarpur’s SKMCH, Dr S.K. Sahi, had on June 13 said that the total number of children who had been admitted to the hospital with AES was 143. Out of them, 43 had died while 33 were discharged.

AES was identified for the first time in Muzaffarpur in 1995. Since then, the disease has been striking like clockwork every year but its root cause has not yet been ascertained. However, according to a paper published in the journal Science Direct, researchers who studied 135 cases drew some conclusions on the basis of eating habits, lifestyle, economic status, caste background and so on. But the actual cause behind the disease is yet to be found.

Of the cases studied in the research paper titled ‘Determinants of Acute Encephalitis Syndrome (AES) in Muzaffarpur District of Bihar, India: A Case-Control Study’, the affected children in 123 cases belonged to Scheduled Castes, Scheduled Tribes or Other Backward Classes. The families of children in 100 cases were found to be illiterate. Farming was found to be the source of livelihood for the families of 114 children. Besides, most of the children had no awareness regarding cleanliness. Doctors consider malnutrition, absence of clean water, lack of adequate nutrition, lack of cleanliness, as well as lack of awareness as a catalyst for the disease.

Dr Ajay Kumar, a member of the Indian Medical Association, says the cause behind this disease is still unknown. “But it is clear that its virus has not been isolated,” he adds.

Kumar claims that requests have been made several times for a dedicated lab for research into AES but none have been set up yet.

Some experts also link AES to litchi consumption in the rising temperature. Muzaffarpur, famous for its litchi production and now for the outbreak of this deadly disease, offers researchers an opportunity to link the two. Some international research suggests that litchi triggers the disease.

This reporter spoke to the parents of about half a dozen children admitted to SKMCH, some of whom admitted that they had consumed litchis immediately before falling sick while many others claimed that their children had eaten the fruit a few days earlier.

The mother of four-year-old Sandhya, admitted to SKMCH, recalled that her daughter had eaten a good quantity of the fruit a day before falling sick. Four-year-old Anshu Kumar’s father also said his son had consumed litchi three or four days before showing symptoms of the fever.

Were steps taken to prevent the outbreak?

Since the root cause of this disease is yet unknown, precaution is the only way to go. The Bihar government had, until now, found an effective method in the Standard Operating Procedure (SOP) it had prepared with UNICEF.

The SOP included many important steps. For instance, Accredited Social Health Activists (ASHA) workers are directed to undertake a survey of villages in order to identify such patients. They would provide ORS to the affected families and ensure that no child in the village slept on an empty stomach. Apart from this, there was also provision for a number of basic amenities in primary health centres.

According to experts, the SOP was followed in the last three or four years — which brought about a decline in children’s deaths, a fact supported by data. 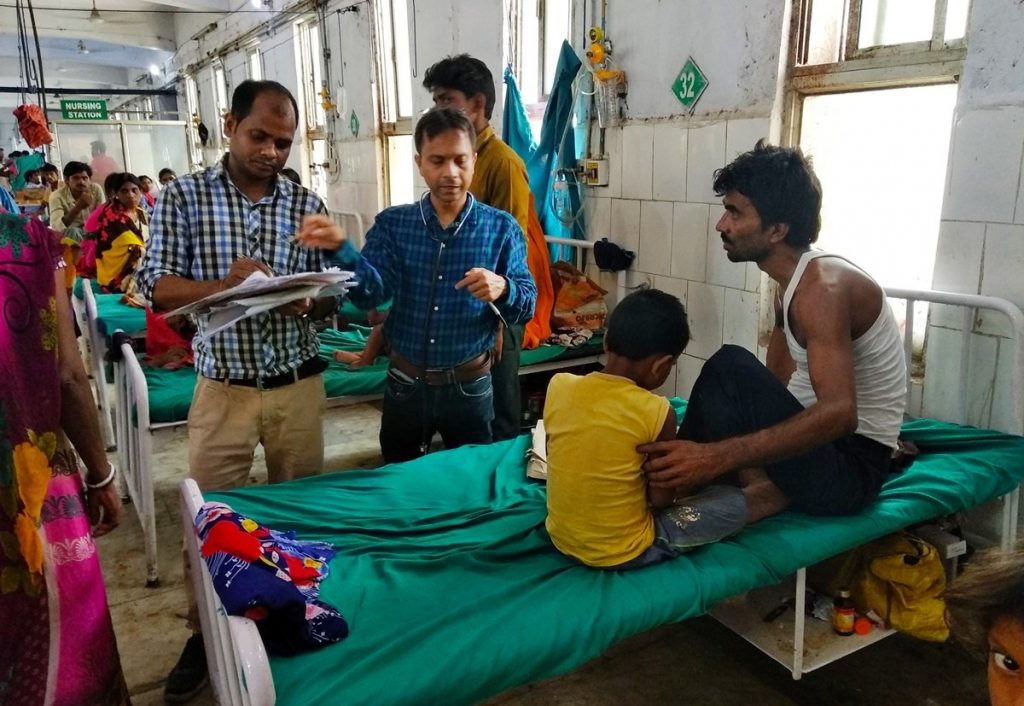 Families of the affected children say that they have had little exposure to awareness drives allegedly taken up by the government. Photo: Umesh Kumar Ray

However, what is believed to be negligence in following the SOP has led to significantly more deaths this year. District health director of Muzaffarpur, Dr Shivchandra Bhagat, however dismisses allegations of any such negligence.

He says, “ASHA workers and auxiliary nurse midwifes were instructed to spread awareness in villages. Announcements were made through loudspeakers. ASHA workers were directed to identify sick children and give them ORS. We have also made adequate arrangements in primary health centres. Instructions have also been issued to compensate anyone who brings a sick child from remote areas on rented vehicles.”

There are around 93,600 ASHA workers. The reporter talked to some of them to verify the claims of government officials but most said it was a yearly occurrence and seemed to want to brush off the importance of awareness and prevention drives.

On condition of anonymity, an ASHA worker said, “I tried to spread awareness in the village under my charge. But we receive very little ORS and I am unable to offer it to all the children in danger.” A similar problem was faced by other ASHA workers too.

The AES outbreak only began in the beginning of June. As affected children began pouring into hospitals, one-and-a-half year old Rani and seven-year-old Durga Kumari died of the fever on June 2. But the government did not take any action.

An ASHA worker in Muzaffarpur said, “Like each year, we spread awareness in villages this year too. But we received instructions to accelerate awareness only a couple of days earlier.”

The families of the affected children, on the other hand, say that they have had little exposure to awareness drives.

Four-year-old Anshu Kumar’s father, Sanjay Ram, who admitted his son to the hospital on Monday said he had not encountered any ASHA worker informing any one in his village about the fever. “There were no announcements regarding precautionary measures to take to prevent the disease,” says the Sahebganj resident.

Ram owns a small tract of land and works as a labourer to bolster his paltry income. For the last few days, as he paces in the paediatric ward, he has not earned anything. “There is still no improvement to my son’s condition. I am worried for him,” he says.

A bout of hiccups in his son, sends the worried father looking for a nurse. “The primary health centre where we could have admitted my son does not even have adequate facilities for treatment. As a result, I had to pay Rs 700 to bring my son to SKMCH, which is nearly 10 km from my house,” he adds.

Like most parents in the hospital, Sanjay is not aware that the government will reimburse his conveyance charges.

With heightened alertness and more intervention at the rural level, a chance may still remain of bringing the situation under control. Nitish has asked the health department of his government for immediate diagnoses and the Union health ministry too is on its toes. All of which, however, does not take away from the government’s initial culpability leading to the death of a hundred children.