The Notion That Doctors Are Infallible Needs to Be Broken

In what was an opportunity to have a meaningful conversation about healthcare services in West Bengal is being driven into a pitfall of political stagnancy and party vendettas.

An oft-encountered phrase in medical school is the principle foundation of what it means to be a doctor: Primum non nocere (first, do no harm).

This tenet has been the unstated motto of the ‘Save the Saviours’ movement in medical college campuses around Kolkata.

The only caveat is that it now urges non-maleficence to be maintained by the patients. Given the recent surge of violence against doctors, it is the need of the hour for practicing doctors.

The brutal attack on Paribaha Mukherjee, an intern in Nil Ratan Sarkar Medical College, Kolkata, on the night of June 10, followed by the pelting of stones at students and doctors in Burdwan Medical College, reiterates the issue of safety in the workplace for doctors.

This was hardly the first incident of the kind.

Violence against doctors has been on the rise since the turn of the century. In India, however, matters have taken a turn for the worse.

Incidents are particularly prevalent in West Bengal, Maharashtra and the northern states of India. There were reports of a patient’s relatives attacking a postgraduate doctor, Subhadip in RG Kar Medical College in 2017. In another incident in Debra, West Bengal, a local nursing home was smeared with human excreta by local goons.

Also read: As BJP and Trinamool Fight It Out, Who Will Save Bengal from Political Violence?

The issue that has been at the centre of the discourse within the medical fraternity is whether they are at fault. The fact that the fraternity takes the onus upon themselves is even more understandable considering the numerous modules and courses introduced into the medical curriculum on ethics, communication, grievance redressal and empathy.

Incidents like what took place at NRS Medical College and Hospital provide another confounding element to this particular conclusion of the medical community. According to reports and accounts of various students, Paribaha and the other victim of the attack, Yash Tekwani, were not the doctors handling the patient directly. It was simply a matter of a mob trying its best to scavenge any doctor in the vicinity to transfer their grief.

This was merely an exercise of mob violence, one amongst many such incidents in the country.

The notion that doctors are infallible needs to be broken. More importantly, the fact that doctors can only do so much and don’t have the ability to breathe life into a patient who has passed the point of no return needs to be reinstated in bold letters.

The lack of political will and the media’s silence, stemming perhaps from not being able to understand the gravitas of the situation, doesn’t help doctors. Instead, it gives further ammunition to unruly mobs to further express their disgruntlement in the form of violence.

There are certain deeper issues that also need to be addressed.

Firstly, the lack of adequate facilities and a deficiency of doctors is ebbing the flow of proper medical care. In Western nations, there are specialised emergency care physicians who are the first points-of-contact at any casualty/emergency ward.

In most hospitals in India, especially government ones, that responsibility falls on interns and junior doctors, who are in the first or second year of practice after completing their studies.

It’s important to understand that interns are not yet eligible for independent practice. They are still in the process of learning. These same people are championing ‘The Save the Savior’ movement, which is ongoing in NRSMC&H. Young doctors in their twenties present a soft target. 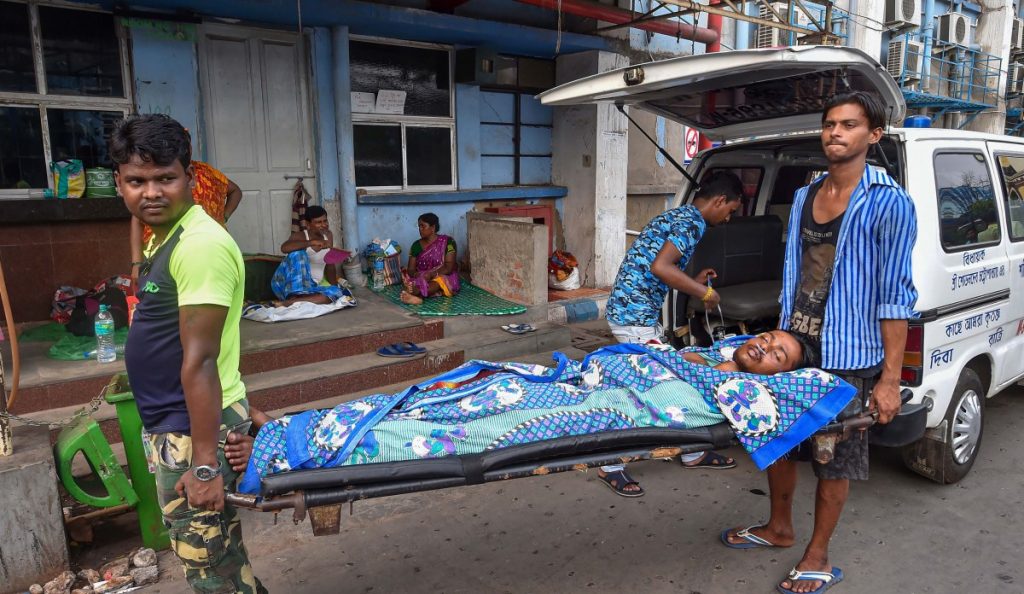 Secondly, the overburdening of health services. In Kolkata, and across India, it is common practice for doctors to work long hours. Compared to private hospitals, government hospitals are far more crowded by people who come from lower centres of healthcare. It is common for a junior doctor to attend to scores of patients in a matter of a few minutes.

The onus is on the health ministries of respective states to distribute the load of patients by instituting more tertiary care centres at district levels. The political reluctance to spend more on healthcare is stagnating patient care and forcing people to rush to just a handful of centres.

Third, there needs to be more outreach to patients and the civic population about the role of doctors. They are fallible. They are human. The gap between expectation and reality is too high at the present time. There needs to be strict hospital protocols about the number of patients entering the ICU, wards and other restricted areas. Security must be a priority.

At present, none of these issues are causing any major political change. Political parties of different hues have turned this into a communal issue, politicising the basic requirements of doctors and threatening doctors with dismissals to get them back to work is shortsighted and is not going to win them any favours from either doctors or civilians.

Their movement is being continued in the manner of primum non nocere so that no other patient has to go through any inconvenience in the future. An environment of trust between the patient and doctor is being fought for. The list of demands which students had issues has still not been addressed to this moment. 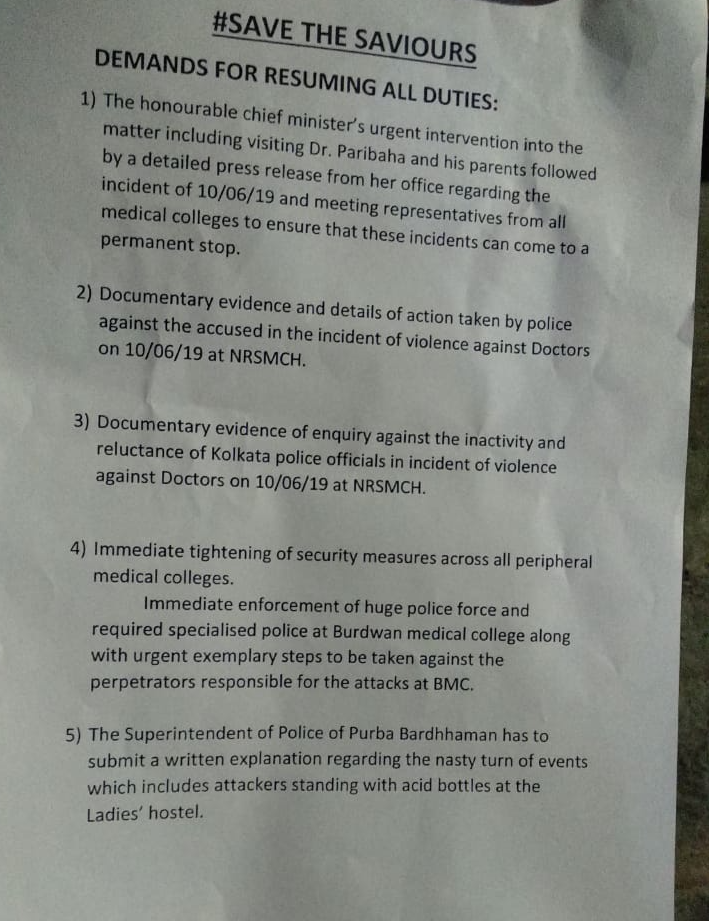 On June 14, 2019, doctors across India shut down their OPDs and clinics to support the movement. They sported black shirts, ribbons and bands to voice their protest. Some even wore bandages to convey the violence that they face on a daily basis. The movement has united the Indian medical fraternity in ways rarely seen earlier. Even Dr Abesh, the West Bengal CM’s nephew is on the road at KPC Medical College displaying his displeasure with the status quo of rampant violence.

In what was an opportunity to have a meaningful conversation about healthcare services in West Bengal is being driven into a pitfall of political stagnancy and party vendettas.

Only time will tell which of the two shall prevail.

Reetobaan Datta is in his final year of medical school at Kasturba Medical College, Manipal.