Even as cancer spreads, the Indian public-healthcare system is unprepared to meet the needs of the country’s most vulnerable patients. 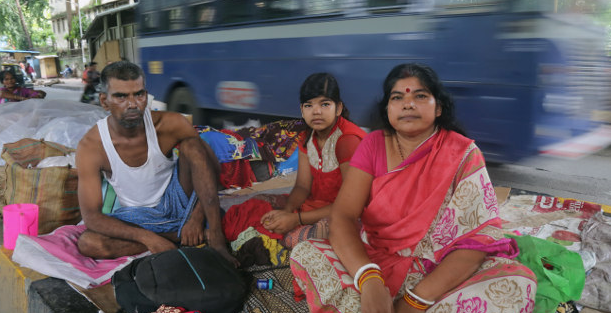 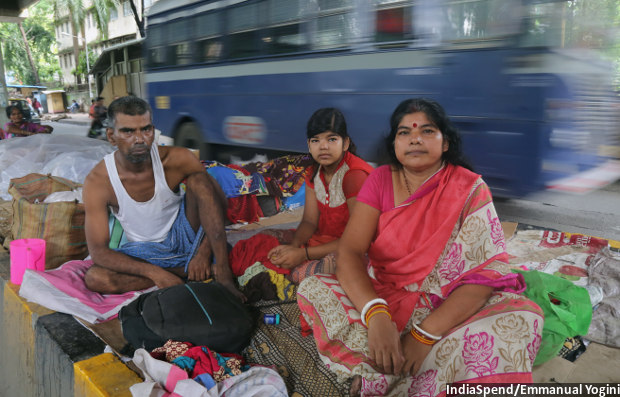 A cancer patient and his wife and daughter sit on the divider under the monorail station near Tata Memorial Hospital, Parel, Mumbai. Many cancer patients–unable to afford a hotel or a dharmshala (rest house) – stay on the pavements around the hospital till their treatment is complete. Credit: Emmanual Yogini

This is the second of a three-part series. You can read the first story here.

Mumbai: Cancer patients living on a street outside India’s main tertiary cancer hospital have not, on average, worked for a year; they lost Rs 55,000 as income; 92% have a class VII education or less; one in four has taken loans – from relatives and moneylenders – and spent Rs 76,000, before winding up on the pavement, according to an IndiaSpend survey of these patients. 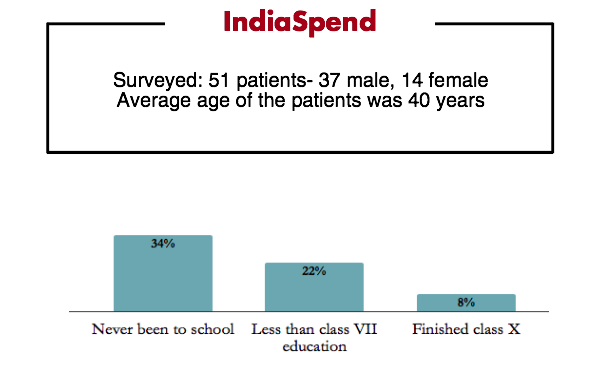 Although India’s incidence of cancer is half the world average – and a third of the western world’s – it suffers high morbidity, mortality and expenses because there aren’t enough oncologists and cancer-care facilities.

A cancer diagnosis can shatter households because the disease is one of the most expensive to treat. “Catastrophic hospitalisation expenditure” – an economic term for a family’s health expenses when they exceed by 40% the family’s ability to pay—caused by cancer is almost 170% more than communicable diseases.

A typical cancer patient in an Indian government facility spends Rs 36,812 ($593) for medical treatment alone, almost half the average Indian annual income per person of Rs 75,672 ($1,219), according to a 2014 study in Lancet Oncology, a global medical journal.

Since India does not have a well-organised and well-regulated cancer-care system, the cost of healthcare, travelling to seek care and disability due to cancer can push the most vulnerable below the poverty line, a situation made worse by India’s lack of social protection.

In the first part of our series on India’s cancer-care crisis, we narrated how the family of college student and aspiring soldier Arvind Kumar had travelled to six doctors and five cities and, in the course of a 2,200-km journey, spent more than Rs 100,000 in seeking medical treatment for his oral cancer, only to end up living on a pavement outside central Mumbai’s Tata Memorial Hospital, India’s largest tertiary care facility. In the second part today, we survey all the 51 patients living on that pavement, and in the third part, we explore how Tata Memorial copes with its flood of patients and how government programmes for the poorest cancer patients work. 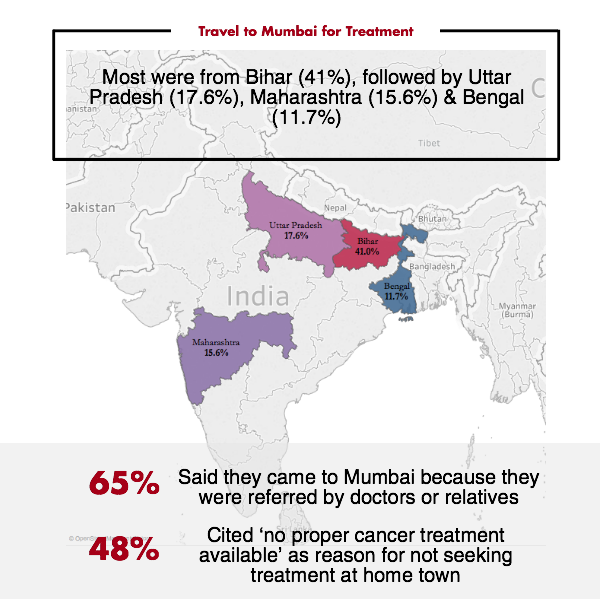 We statistically chronicled the uncertain, difficult and financially ruinous journey of 51 patients (37 male, 14 female) and their families, living on two 300-metre stretches of footpaths, along Jerbai Wadia Road, at the front and rear of Tata Memorial Hospital’s Homi Bhabha Wing in the central Mumbai neighbourhood of Parel. Our findings illustrate how – as cancer spreads – the Indian public-healthcare system is unprepared to meet the needs of the country’s most vulnerable patients.

We also spoke to 30 patients seeking treatment in three dharmshalas – non-religious rest houses – in Mumbai to compare the quality of life between the two groups. The dharmshalas were more hygienic, and weekly food expenses averaged less than half (about Rs 630) for those who lived there instead of the footpath, with 50% of cancer patients getting their food from the dharmshalas.

Free or subsidised care but still unaffordable to most patients

Run by the central government’s Department of Atomic Energy, the 76-year-old Tata Memorial Hospital offers subsidised treatment to 60% of its patients. Most consultation, diagnostic and bed charges are waived for those below the poverty line and highly subsidised to others.

We found most of the patients living on the footpath were from outside the state of Maharashtra, had been living in Mumbai for the previous three months and most were daily wage labourers who had exhausted their savings and borrowed Rs 75,000, on average, for their treatment.

The patients also lost Rs 55,000, on average, in wages due to cancer. Even though they were living on the footpath, they spent Rs 1,500 every week on food and other expenses.

More young patients than old; poorly educated or not at all

Savita Chaudhary, 40, cannot walk. Bone cancer has ravaged her knee. So, she sits on a thin mat on the pavement of Jerbai Wadia street. She has been living here for eight months, after being referred to the Tata Memorial Hospital by the state-run Sir JJ Hospital further downtown. Chaudhary journeyed 280 km to Mumbai from her village of Raver, Jalgaon, in northern Maharashtra. Chaudhary studied till class VII and is a daily wage labourer, as is her husband, who also lives on the street with his wife and their 13-year-old son, who – as a worried Chaudhary points out – has missed school since they moved to Mumbai. The Chaudharys have already spent Rs 185,000 on her treatment, and the doctors have advised surgery.

Our survey found most patients were, with an average age of 40, relatively young; three were younger than 18 and one was over 60. Of these, 34% had never been to school, while 22% had a class VII education or less, and no more than 8% had completed class X.

A large-scale cancer mortality study in India, published in 2012 by the journal Lancet, showed that 71% of all cancer deaths were of people between 30 and 69 years old. Age-standardised cancer mortality rates per 100,000 were two times higher among least-educated adults than among the most educated adults, according to the same study.

Four in 10 patients living on street from Bihar, 92% sought treatment before coming to Tata Memorial Hospital

Mohammed Ikram, 36, suffered a burn on his neck as a child. When he became an adult, the wound was infected and, despite surgeries in Begusarai and Patna in his home state of Bihar, the wound became cancerous. Despite spending Rs 200,000 in 10 private hospitals over two years near his home town of Morar in Bihar’s eastern district of Khagariya, the pain had not decreased. It has been two years since Ikram, a daily wage worker, last worked. When we met him in May 2017, he was living – with his wife and two of his six children – on the pavement outside Tata Memorial Hospital for the last 10 days, waiting for the results of medical tests. He said he was constantly in pain.

None of the patients on the footpath of Jerbai Wadia street were from Mumbai. As many as 96% had come from their hometowns to Mumbai for cancer treatment. Most respondents were from Bihar (41%), followed by Uttar Pradesh (18%), Maharashtra (16%) and Bengal (12%).

Nearly half (48%) cited “no proper cancer treatment available” as the reason for not seeking treatment in their home towns, and 65% said they came to Mumbai because they were advised to make the journey by doctor or relatives. Of the 51 patients we spoke to, 92% had sought medical care before coming to Tata Memorial Hospital: 60% from a private facility and 50% from a government hospital (many chose both). 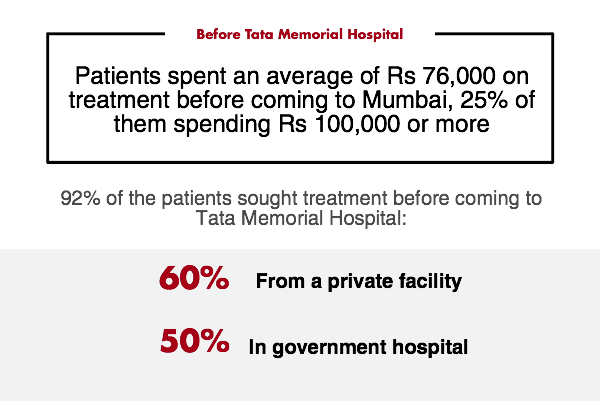 One of the reasons for going to multiple doctors before coming to Tata Memorial Hospital was the absence of allopathic medical practitioners in rural areas. In a 2008 study, 92% of patients from rural Indians households said they first went to private doctors, 79% of whom were not allopathic practitioners. Most patients seek private-sector healthcare, even though treatment is free or cheaper in government hospitals; 80% of outpatient and 40% of in-patient care for cancer was provided by the private sector, noted a 2014 Lancet study on delivery of affordable and equitable cancer care in India.

Ever since his cancer diagnosis one-and-a-half months ago, Baliram Shinde, 46, has come under great mental pressure. His wife left him, and he has filed a police complaint against his younger brother, who now lives with him on the pavement – unlike most other patients who are accompanied by a spouse or child – for bringing him to Mumbai. Shinde, an agricultural labourer, told us that he fought with his brother because the cancer treatment he is being forced to undergo was “too expensive”. He has two children, and the elder of the two wants to cut ties with him. When IndiaSpend met Shinde, he had completed his diagnostic tests and was waiting to see a consultant.

Of the 51 cancer patients living on the pavement of Jerbai Wadia street, 80% said this was their first time in the city and had been here for an average of three months seeking cancer care. Almost all patients had at least one attendant, usually a relative.

About a third (29%) had gastrointestinal cancer, 23% had oral cancer and 6% had bone cancer. 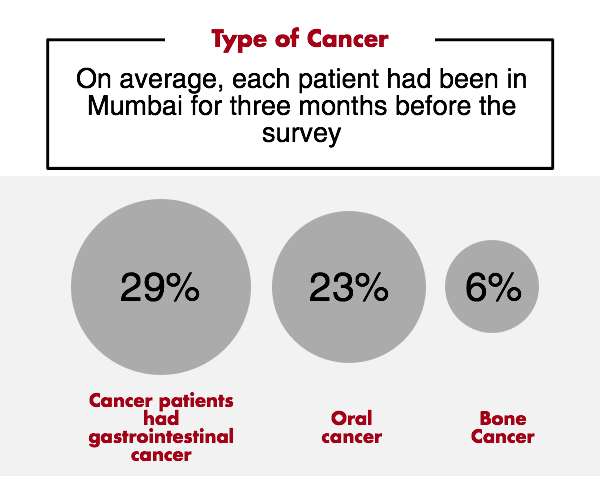 Ajay Yadav, 19, a student, has gastrointestinal cancer. His family first went to a private hospital close to their hometown of Karel in western Uttar Pradesh’s Mainpuri District. They spent Rs 200,000 at the Karel hospital. The family has borrowed Rs 40,000 from local moneylenders. His father, Netrapal Yadav, said he would sell the family’s eight bighas (two acre) of land to raise more money to treat his son.

About one in four (39%) patients we surveyed had borrowed money for cancer care, 55% from relatives, 30% from money-lenders and 15% from both. None of them had taken a loan from a bank. The others said they were using savings, but most had exhausted these savings.

There are government schemes to provide health assistance to those living below the official poverty line – Rs 27 in rural areas and Rs. 32 in cities. These programmes include the Rashtriya Arogya Nidhi or national health fund, which includes the Health Minister’s Cancer Fund, the State Illness Assistance Fund and the Health Minister’s Discretionary Grant. Apart from these, the Rashtriya Swasthya Bima Yojana (national health insurance scheme) provides Rs 30,000 per year as insurance to families living below poverty line; most states also have their own health insurance programmes.

Most patients we spoke to did not know of these programmes; 92% were not making use of any government scheme to support medical treatment or living costs.

“Roughly 71.7% of healthcare is financed through out-of-pocket payments, with some studies estimating this to be as high as 90% in areas where public health insurance coverage is low,” said the 2014 Lancet study quoted earlier. “These costs in India are among the highest in Asia.”

On average, patients and attendants living on the Jerbai Wadia pavement spent Rs 1,500 per week on food and living expenses: 92% got their food from a roadside eatery or restaurant and 39% from an NGO. As many as 82% got drinking water from the Tata Memorial Hospital.

More than half (56%) of the cancer patients we surveyed worked before cancer treatment began; 82% were daily wage labourers earning Rs 5,000 per month, on average. Most had not worked for a year because of the cancer.

Of the attendants, 41% worked before coming to Mumbai, usually as daily wage labourers.

Each patient, as we said, reported losing an average of Rs 55,000 because of cancer and the resultant displacement.

Other studies have found that households affected by cancer spend 36-44% of annual expenditure on in-patient expenses. Further, households with a family member diagnosed with cancer also had 2-3% lower workforce participation rates. These studies also found that cancer-hit families borrowed and sold assets about 50% and 16% more than control households.

The IndiaSpend Cancer Survey was designed and analysed in collaboration with independent researchers Putul Gupta and Santosh Harish.