The Ayodhya administration is yet to release any health guidelines for the event on August 5. 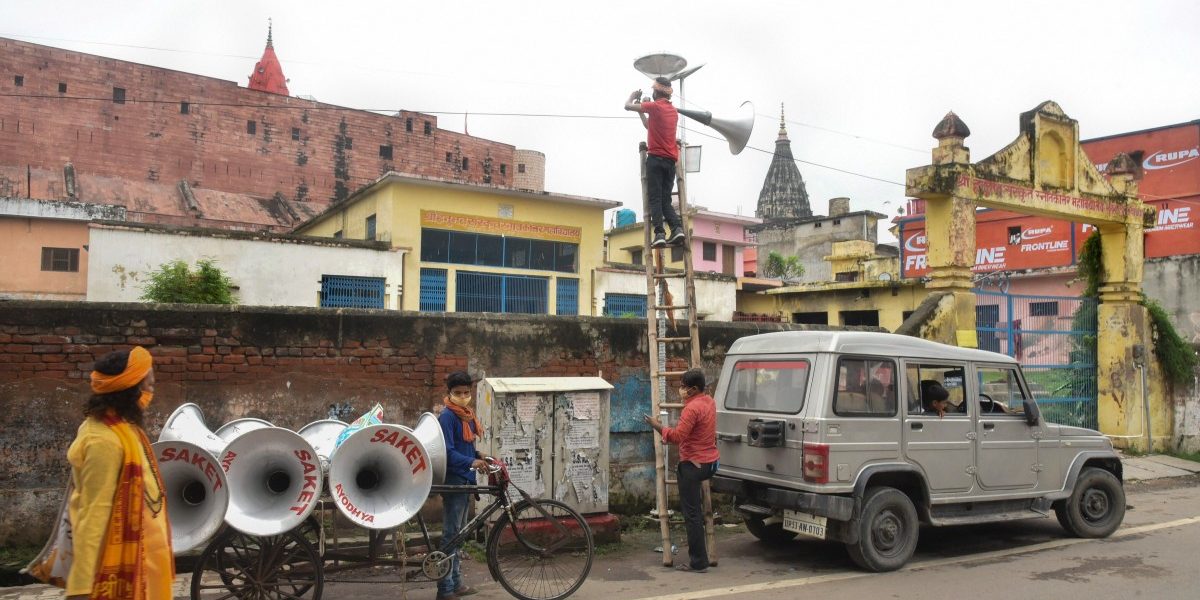 Loudspeakers being installed in Ayodhya ahead of the August 5 bhoomi pujan. Photo: PTI

New Delhi: Ahead of the planned ‘bhoomi pujan‘ ceremony on August 5 at the Ayodhya Ram Temple site, to be attended by Prime Minister Narendra Modi, a priest who was going to perform ceremony and 16 policemen monitoring the site have reportedly tested positive for COVID-19.

The ceremony is meant to kick-start construction of the temple, at the site where the Babri Masjid once stood.

The Ministry of Home Affairs’ guidelines on ‘Unlock 3.0’, which starts from August 1, have explicitly stated that social, political, sports, entertainment, academic, cultural, religious functions and other large congregations will not be allowed even outside of containment zones. How this event – which Modi himself is attending – is being allowed has not been mentioned.

While the Ayodhya administration has already laid out several conditions on television reporting and panel discussions on the event – including asking channels not to invite “controversial” figures, it has not, till date, drawn up a list of do’s and don’ts on ensuring social distancing at the event. It is unclear what measures, if any, the administration will take to prevent the spread of COVID-19 at the event.

The Ram Janambhoomi Teerth Kshetra Trust, set up to build the Ram temple, has urged “anxious” Ram devotees not to come to Ayodhya, and instead watch the live broadcast of the ceremony on Doordarshan and light diyas in their homes to welcome the “grand and divine” occasion.

An effort will definitely be made in future to provide an opportunity to all Shri Ram devotees to participate in the construction ceremony of Shri Ram Janmabhoomi Mandir.

While releasing health safety guidelines does not seem to have been high on the administration’s priority list, it has made sure that the route Modi’s convoy will take from the helipad at Saket College to the Ram Janmabhoomi site is decorated with sketches of figures from the Ramayana.