According to the Union health ministry, the number of active cases in India is now 1117 – up by 175 compared to the previous day – while the death toll stands at 32. A Tablighi gathering in Delhi has emerged as a hotspot. 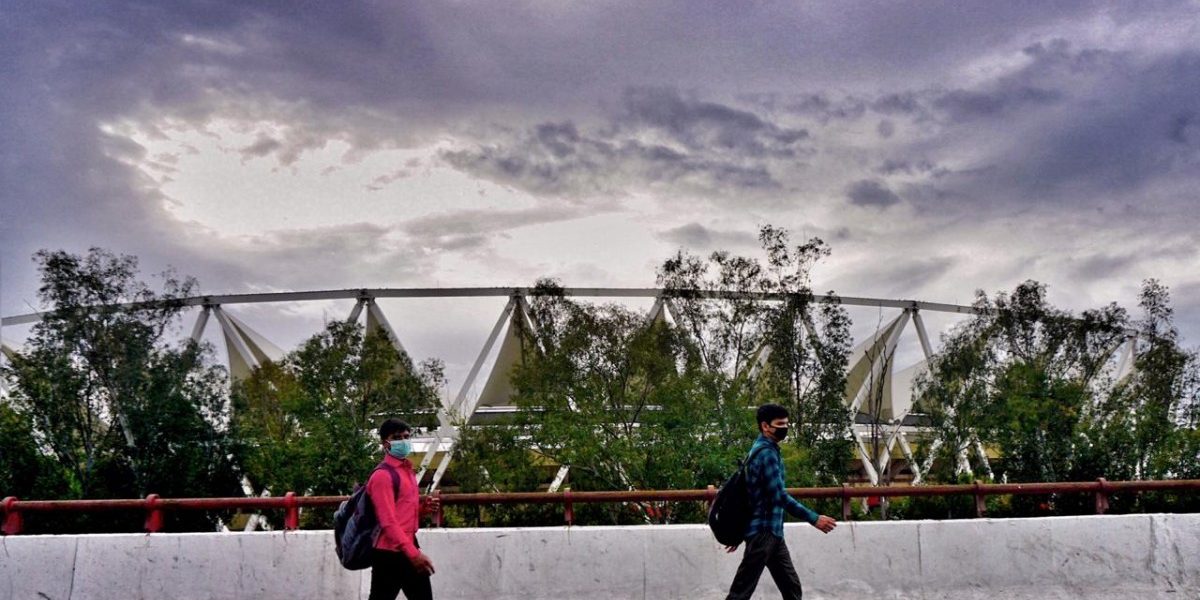 Workers laid off due to the lockdown walk past Jawaharlal Nehru Stadium in New Delhi on their long trek home. On Monday, the Sports Authority of India handed over charge of the stadium to the Delhi government so that it can be used as a quarantine centre for those exposed to the novel coronavirus. Photo: Shome Basu/The Wire

New Delhi: The Jawaharlal Nehru Stadium in Delhi is to be converted into a quarantine centre by the Sports Authority of India on the request of the Delhi government. The move comes close on the heels of fears that hundreds of people who attended religious gatherings in Nizamuddin from early March to March 18 might have been exposed to the novel coronavirus.

While one person who was present at the gathering at the headquarters, or markaz, of the Tablighi Jamat in Nizamuddin West, is suspected to have died in Delhi, six from the congregation are said to have died in Telangana while two others  in Tamil Nadu and one in Jammu and Kashmir are also now dead. Around 163 people have reportedly been admitted to hospital in Delhi with symptoms and are being tested while many more have tested positive after returning to their native states in other parts of the country, including Telangana and the Andaman and Nicobar Islands.

The gatherings ended nearly two weeks ago – one day before Prime Minister Narendra Modi’s first address to the nation when he first raised the importance of social distancing. What has Delhi government officials worried is that most of those who have taken ill were staying in the vicinity of the Nizamuddin dargah. Contact tracing of those they might have been in touch with will be a top priority now, in Delhi, of course, but also in different states as the Tablighis are essentially missionaries who travel widely to encourage Muslims to be true to their faith.

The police on Monday cordoned off parts of the Nizamuddin area near the Markaz after a large number of people from the area reported sick. A Delhi Police team led by joint commissioner D.C. Srivastava reached the area after reports emerged that some people who had attended the religious gathering on March 18 had tested positive for COVID-19.

It is estimated that some 2000-3000 people from various states attended the Markaz gathering in this period. Thereafter, a total of 174 people showing symptoms of coronavirus were admitted at Lok Nayak Hospital. Of these 163 patients were taken there from Nizamuddin.

Hospital authorities say that while 85 patients were admitted on Sunday, the remaining were brought in Monday.

Following these admissions, the Delhi government and Central health authorities rushed teams to Nizamuddin to sanitise the area. A large part of the colony was cordoned off. People were also advised to self quarantine and to engage in social distancing to avoid contracting the virus.

Deputy commissioner of police (South East) R.P. Meena said that notices have been served on the organisers of the religious gathering. “We are examining the matter. Action will be taken if required and then an FIR will be filed immediately,” he told the media.

On their part, the Tablighi authorities released copies of their letters to the Delhi Police noting that their premises were overcrowded due to the lockdown and requesting help in ‘de-congesting’ the area.

While religious gatherings around the world, including in Iran, Egypt and Europe, had been suspended from at least the second week of March because of COVID-19, and Indian universities and schools had cancelled classes well before any official diktat, Indian believers have been late adopters.

On the day the Tablighi Jamaat event was held, Yogi Adityanath insisted that a large fair planned for Ayodhya on the occasion of Ram Navami from March 25 to April 2 would proceed as usual while Acharya Paramhans said that ‘Lord Ram would protect devotees from the coronavirus”.

One day after Modi announced the “curfew like” national lockdown on March 24, Adityanath violated the official guidelines to take part in a religious ceremony in Ayodhya along with dozens of people.

Note: In an earlier version of the story, the quote about Ram saving devotees from the coronavirus was wrongly attributed to Yogi Adityanath. It was in fact said by Acharya Paramhans. This clarification initially described him as head of the Ayodhya temple trust; he is in fact an Ayodhya based sadhu active in the Ram temple movement. Another sadhu, Ramchandra Paramhans was earlier head of the Ramjanmabhoomi Nyas. The head of the official Ayodhya Temple Trust is Mahant Nritya Gopal Das, and he too had said the coronavirus would not affect those who would come to Ayodhya for Ram Navami with love and devotion, as quoted by Aajtak:

The story has also been edited to note the Tablighi Jamaat claim that the Markaz saw continuous religious programme from early March till around March 18.