Doctors and activists are using medical explanations and religious reasoning to curb the violent and still pervasive custom.

A girl looks on among Afghan women lining up to receive relief assistance in Jalalabad, Afghanistan, June 11, 2017. Photo: Reuters

In the winter of 2009, as a young teenager, Soraya says she was raped by a 22-year-old male teacher at her English language school in Eastern Afghanistan. A few months later, she was spotted by Afghan police walking with her rapist on the street. After being taken to the police station, she was forced to call her father, who was informed that she had likely engaged in adultery. Soraya’s father hit her when he arrived at the station and insisted that she be submitted to a virginity test.

The test was administered by a male doctor at a clinic the next day. “He put his fingers in my vagina, he looked at me, and said you are not [a] virgin,” Soraya, now 25, recently recalled to a friend, who submitted the details in a letter to Undark on the condition that Soraya’s real name and whereabouts be withheld for fear of retribution from members of her still-estranged family. “He seemed to enjoy that — not just my suffering, but also touching me.”

For reasons unclear to Soraya — perhaps it was her tears and begging, or a bribe from her younger brother — the doctor agreed not to tell her enraged father, who was waiting in the next room. Instead, he pronounced Soraya dokhtaret pak ast in her native Dari, or “the girl is pure.” But the experience left her devastated. She attempted suicide, and ultimately fled Afghanistan. “I was a good and a happy girl,” she said, “but the virginity test killed me.”

Soraya is far from alone. While many Taliban-era strictures have been dismantled, human relationships — and female sexuality in particular — remain matters of strict control in Afghanistan. Simply admitting publicly to sex with a man outside of wedlock remains an illegal and punishable offence in the country, and Afghan police routinely question men and women who fraternise in public. Failure to provide satisfactory answers or evidence of a legal, moral association can lead to an arrest and investigation — largely focused on the character of the woman involved.

One of the first actions taken in such cases is that the woman is subjected to an invasive and scientifically dubious “virginity test.” If it is determined that the woman has engaged in sexual intercourse, she can be sentenced to up to 15 years in prison.

In 2013, the non-governmental organisation Human Rights Watch (HRW) estimated that “half of all women in prison and about 95% of girls in juvenile detention in Afghanistan had been arrested on ‘moral crimes’ charges.” Virtually all of these women are believed to have been subjected to virginity testing. The practice has also been documented in nearly 20 countries, from the Middle East to parts of South and Southeast Asia, Africa, South America, and Europe, according to the World Health Organisation (WHO).

The organisation notes that amid increased globalisation and migration, “requests for and cases of virginity testing are emerging in countries that have no known previous history of the practice, including Belgium, Canada, the Netherlands, Spain, and Sweden.”

Also read: Afghan Working Women Targets of Violence for Working Outside the Home

In Afghanistan, efforts have been made to curb the practice. Afghanistan President Ashraf Ghani issued an order last year that essentially banned virginity testing without a woman’s consent— considered a human rights violation by the WHO — in the nation’s hospitals and clinics. And a coalition of public health advocates and local leaders are now working to spread the word at health care facilities across the land. Still, the practice remains widespread, and earlier orders from the country’s own Independent Human Rights Commission, according to HRW, failed to persuade many local judges, prosecutors, and law enforcement personnel to abandon virginity testing.

“The harmful practice of virginity testing is a social, cultural, and political issue,” the WHO and the UN declared in an interagency statement on the practice last fall, “and its elimination will require a comprehensive societal response supported by the public health community and health professionals.”

The test can take different forms. In some cases, “we pull from the [labia major] towards us so we can physically see the hymen,” said Dr N. Akbari, a female gynaecologist from the northern provinces of Afghanistan who requested that her full name not be used and her location be withheld in order to speak safely and openly.

Another method employed by doctors is the so-called “two-finger test,” in which two fingers are inserted into the woman’s or girl’s vagina to determine its laxity. Neither test has any scientific basis or clinical utility.

“Aside from being unreliable, this test is extremely uncomfortable,” Akbari said. “The hymen differs from person to person and may not even be formed. It is a mucous membrane that may or may not be there. Any doctor with a degree and medical staff knows this.” And yet, Akbari admitted that she had conducted more than 1,000 such tests herself, due to the powerful social forces at play. Some doctors also see the test as an opportunity to extort the victim for payment in return for a certification of virginity, Akbari said.

Asked for details and the prevalence of virginity testing, the doctor shared that as a young professional still undergoing her residency, she witnessed at least two such tests each day, and more during the nightshift. She conducted the test for the first time herself in 2012. “Women would be dragged to the hospitals on their wedding nights if they didn’t bleed while consummating the marriage,” she recalled. “It would be evident that they had been beaten or threatened and were forced to come to us. This was one of the most common types of cases we saw.”

In other instances, young girls would come to the clinic on their own. “Grade 12 or university students with access to the internet might read something online about the delicate nature of the hymen,” Akbari said, “and then come to us out of fear that they had lost their virginity cycling or doing sports.”

A final recollection brought the doctor to tears: In 2014, an 18-year-old woman was brought into Akbari’s clinic, beaten and shot by her family because they had seen her at a restaurant with a boy. “Since it was a criminal case involving accusations of adultery, we were asked to do a hymen exam to see if she had had intercourse,” Akbari said. “I found that her hymen was intact and wrote that in my report.”

The family did not believe the finding and demanded that she change the results. “They showed up with armed men threatening me,” Akbari said. “I had to escape the hospital hiding under a burqa and for the next month continued to go to hospital wearing full-face veil.”

The girl died from her injuries later that night, Akbari said.

“No girl should have to go through this examination; it’s unscientific and humiliating, and just because we are women, we are asked to prove,” the doctor said, adding that she has helped many desperate and fearful women to repair their hymen and avoid a dire fate. “As a woman, and as a human being with compassion, I have helped several girls who have been raped. If I hadn’t, their fathers, brothers and husbands might have killed them.” 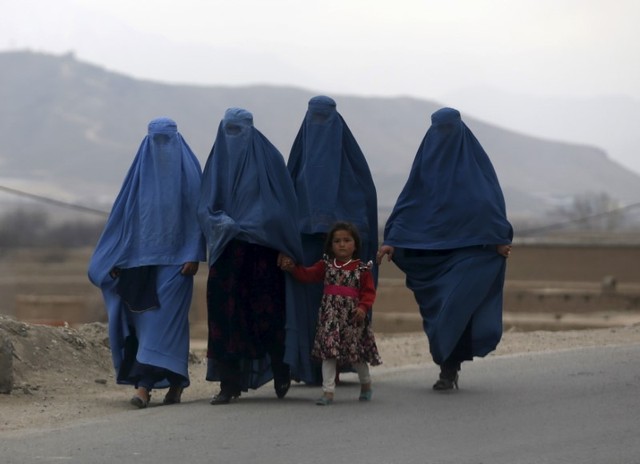 Afghan women walk along a street on the outskirts of Kabul, Afghanistan March 1, 2016. Credit: Reuters/Omar Sobhani/Files

The Afghan Ministry of Public Health issued a new policy on virginity testing last summer, but the section banning the test was not approved by the parliament, according to Dr Kubra Panahi, who works with the ministry to implement training workshops designed to educate medical services providers in hospitals and clinics about the realities of virginity testing, and to deter them from performing it.

Responding to the lack of parliamentary support, President Ghani introduced an executive order directing all government health workers to stop virginity testing. “[This] basically entails that virginity testing can only be ordered by a court, and it requires the permission of the woman being tested,” Panahi said.

A policy issued alongside the executive order now requires medical professionals to undergo anti-virginity training workshops like those conducted by Panahi, who was herself trained by Marie Stopes International, a nongovernmental organization focused on global family planning and reproductive health, which is now working with officials in Afghanistan to spread the word. Additional funding for the workshops has been provided by the Swedish government.

During one recent workshop conducted at the Isteqlal Hospital in west Kabul, some 25 female health care workers in the obstetrics and gynaecology ward gathered to hear details about the new policy changes regarding virginity testing, and to be reminded of its lack of scientific support. Despite their medical training, the subject is considered too sensitive for a mixed-gender session, though Panahi says she conducts sessions with male doctors as well. The men, she says, tend to be much more defensive on the topic.

As the women, ranging from junior to senior medical staff, began to occupy the seats at the back of the room, Panahi coaxed them closer to the front, where she gave a presentation explaining the ineffectiveness of the test and outlined the legal restrictions against it. She also made an emotional appeal rooted in religion.

“We present our argument through the legal lens, the Islamic lens, and of course the medical explanation which they already know. Just putting forth the legal reasoning is not enough in Afghanistan, and we have to connect it to the religion to convey our message,” Panahi explained. This includes the use of Quranic verses that highlight the equal rights of men and women. “We point to parts in the Quran,” she said, “that ask believers to not judge and interfere in someone else’s private affairs.”

Panahi said she often faces pushback during these sessions. “The medical community in the provinces tends to get very defensive about their work in virginity testing,” she said, recalling arguments with her colleagues who have even accused her of promoting an immoral culture. Like Akbari, Panahi said she’s keenly aware of the risks she faces in conducting this work, but as threats of a resurgence of the Taliban continue to percolate — particularly following faltering peace talks with the US — addressing this issue now, she says, is perhaps more important than ever. “There needs to be at least one person who should raise their voice against injustice,” Panahi said, “and I think it should be me.”

For all her efforts, Panahi acknowledges that change will be slow — and for women like Soraya, it is already too late.

After years of mental anguish and threats to her life, Soraya said she managed to escape Afghanistan with the help of her younger brother in 2013. She has since returned to work with an international organization, but she hasn’t informed her family that she is back. “I can’t forgive neither my family, nor myself, because of all shit that they have done with me,” she said. “I am the victim. I still suffer. The virginity testing was a bad part of it. He had put his finger in my vagina, and [was] playing and enjoying.”

“When I remember I can’t sleep [and] I knew I would never feel in love again,” she added. “I hate men. I hate my father too.”

Ruchi Kumar is an Indian journalist currently working in Kabul, Afghanistan, focusing on news stories from the Afghanistan-Pakistan region. Her work has been published in Foreign Policy, The Guardian, NPR, The National, Al Jazeera, and The Washington Post, among other outlets.