In any sane democracy, the death of over 60 children in a few days would have been a career-ending event. Not here. 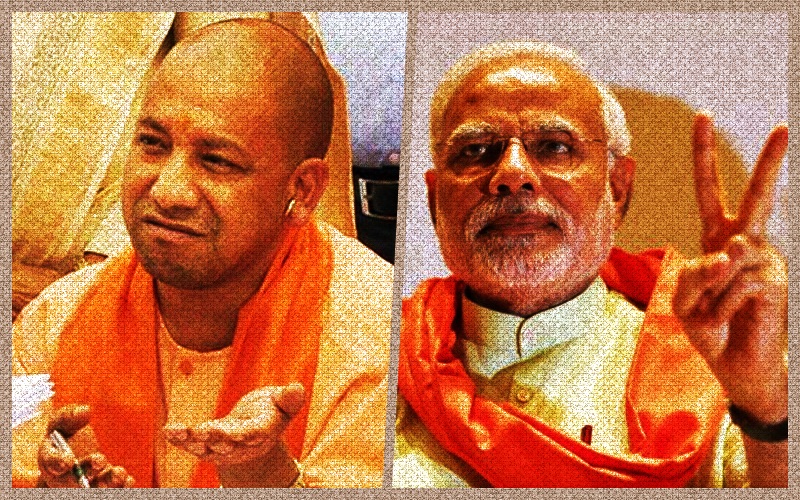 The BJP went to the polls in UP with Modi's face and did not declare a chief ministerial candidate. Credit: Reuters

Prime Minister Narendra Modi was the medium, message and ‘mukhota’ – mask – for the eventual anointment of the Gorakhnath mandir ‘mahant‘ Adityanath as chief minister of India’s most populous state, Uttar Pradesh.

Adityanath – a five term MP from Gorakhpur, where he is still the incumbent parliamentarian – has led a shambolic government for the past four months. The still unfolding tragedy at the Baba Raghav Das Medical College in Gorakhpur, where more than 60 children suffering from encephalitis and other ailments died over the past five days, is a pointer to his disastrous governance.

The BJP went to the polls in UP with Modi’s face and did not declare a chief ministerial candidate. Party president Amit Shah also signalled the party’s indifference towards Muslims – who form 19% of the state’s population – by not giving a single ticket to a Muslim candidate. In its election campaign, the BJP blatantly sought to consolidate Hindu votes by using ‘dog whistle’ issues to polarise views against the community.

Adityanath had zero administrative experience – except for running his math and his band of vigilantes, the Hindu Yuva Vahini (HYV). He had twice turned down an offer from Modi to serve as a minister of state in his cabinet, choosing instead to lobby for his dream job: UP chief minister. He was, accordingly, was anointed chief minister by the Modi-Shah duo.

Not only is UP one of India’s largest states, it is among the most backward with terribly low human development indices, a collapsing administration, minimal power supply (some villages have no power for days), a broken-down road system where pucca (tar) roads barely exist, a primitive health system and poor water supply, with even filthy water barely being supplied by the government. Add to this state abdication of “bijli, sadak, paani (electricity, roads, water)” a collapsing law and order situation – with crime rates spiralling – and it is apparent what a daunting administrative challenge UP is.

From the day he assumed office, Adityanath had some strange priorities. These included unleashing the bizarrely-titled “anti-Romeo squads” to ostensibly check sexual harassment (really a dog whistle nod to his favourite campaign theme “Love Jihad”), shutting down abattoirs to save the holy cow, which was criticised by the courts, and increasing funds for the Kailash yatra as a response to the Haj ‘subsidy’.

Predictably, his private vigilante army, the HYV, started running amok. Even before Adityanath’s anointment, the war cry in UP was “UP mein rehna hoga toh Yogi Yogi kehna hoga (If you want to live in UP, you have to chant Yogi Yogi)”. The HYV attacked consenting couples in the guise of helping the “Romeo squads” and all manner of extortion rackets came in to being. Finally, an embarrassed RSS had to ask Adityanath to rein them in. Adityanath has now frozen enrolment into his vigilante army, whose ostensible publicly-declared function is to fight for the rights of Hindus. Adityanath had created the Vahini as a parallel to the BJP cadre on the ground.

Just before the Gorakhpur tragedy erupted, the Adityanath government had declared that all madrassas in UP would be subject to video monitoring on Independence Day (August 15) for an unprecedented and rather ominous patriotism test.

So clearly, Adityanath’s priorities after he became chief minister remained what they were before. He has been accused on numerous occasions of inflammatory hate speech. In May this year, Adityanath’s government denied permission to try him in the 2007 Gorakhpur riots cases. Adityanath has several criminal cases against him, including rioting, attempt to murder, being armed with a deadly weapon, trespassing on burial places and criminal intimidation. He was arrested for inciting the Gorakhpur rioters in 2007. In his speeches in the run up to the UP elections, where he was provided a helicopter by the BJP and addressed a record number of meetings, Adityanath said that the “exodus of Hindus from Kairana” and “love jihad” were important issues. Adityanath’s HYV in 2015 embarked on a mission to declare the cow as “rashtra mata” (mother of the nation).

Given that Adityanath’s agenda remains today what it always was, why did the BJP – which clearly deems this agenda acceptable – refrain from declaring him as its chief ministerial face for UP during the election? Former RSS pracharak Govindacharya once memorably described former prime minister Atal Bihari Vajpayee as a “mukhota” – or mask – for the RSS. It is a testament to Modi’s skills as a politician that despite bearing the burden of the 2002 riots in Gujarat in which nearly a thousand Muslims were killed he not only became prime minister but even became a “governance mask” for Adityanath.

Despite the law and order situation deteriorating further after Adityanath took over, he is also in the process of getting a makeover from the usual suspects – the embedded ‘godi media’ which gushed over his “gaushalas (cowsheds)”, his “favourite cow” Nandini and dog Kalu on national television.

Make no mistake, the deaths caused by the government in Gorakhpur by not paying an oxygen tank bill worth Rs 68 lakh after half a dozen reminders is just a blip in the Adityanath story. While the dean of the hospital has been suspended, the doctor has been removed and an FIR has been registered against the private vendor – but the government and Adityanath have shirked all responsibility. Even Modi, who was the face of the election with his huge promises of “good governance” and is an MP from Varanasi, has not expressed any grief over the tragedy except a small mention in his Independence Day speech when he called it a “natural calamity”.

While close to 70 children, some just day-old infants, died because of a Rs 68 lakh bill, the BJP government at the centre has spent Rs 1, 100 crore on advertisements featuring Modi, an RTI petition had revealed. The expenditure was between June 1, 2014 and August 31, 2016. This expenditure by the Union government was just on television spots and the internet. Adityanath also has a huge advertisement budget and no amount of misgovernance will prevent the makeover of the 45-year-old young monk already talked of as Modi’s successor in Sangh circles. In any sane democracy, Gorakhpur and its tragedy would have been a career-ending event. Not here. And while Vajpayee was a benign “mask” keeping the RSS at arms length, not allowing it to interfere in the running of his alliance government, Modi, with his full majority and now control over all the constitutional posts, is not.

The way Adityanath was pulled out of the hat of hard Hindutva and foisted on UP was a sleight of hand. Adityanath is still the same fire-breathing fringe leader of the HYV; the restraints of his job have not fettered him one bit. His agenda continues to be communal and inflammatory – an agenda believed by Modi and Shah to be essential if the BJP is to ensure a repeat of 73 out of 80 seats that they got in 2014. So cows, mandirs, love jihad and Romeo squads will continue to be the only agenda for Adityanath’s administration. Minorities will be further pushed to the brink and the chronically awful administration of UP will continue.

Consider Adityanath’s track record and his four months in office, and it’s clear that we need to hold him and the BJP accountable. Dog whistles being passed off as “good governance” are a recipe for tragedy. As Arun Shourie once observed, “Modi thinks by managing headlines he’s managing events. Events have a terrible way of overtaking us”.

Swati Chaturvedi is a freelance journalist based in Delhi. She tweets at @bainjal.