Indian embassy official in Tehran shared the list with Indian pilgrims but declined to comment on authenticity. 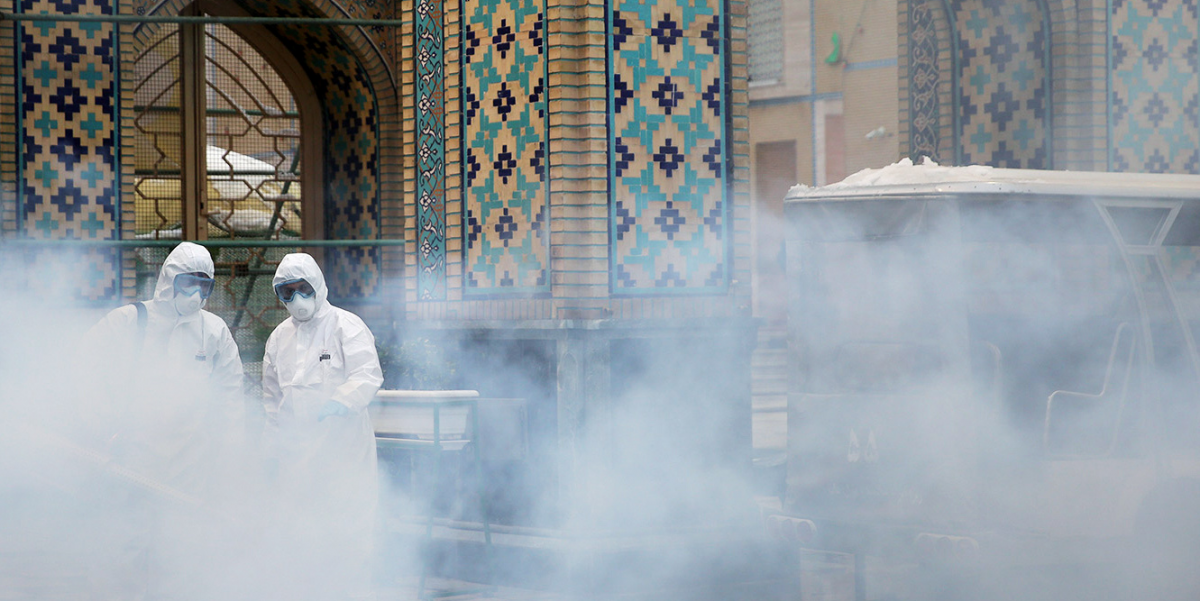 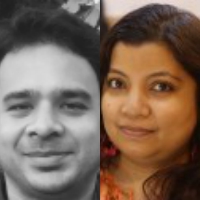 New Delhi: At least 254 Indians in Iran have tested positive for COVID-19, the disease caused by the novel coronavirus, according to a list of names shared with The Wire by pilgrims who are stuck in Qom.

The list, a copy of which is with The Wire, appears to have been compiled officially but bears no indication of its provenance. If authentic, this means the total number of Indian citizens infected by the virus would be three times the currently disclosed number of 130 (113 in India, 17 abroad).

“This list was sent to us on WhatsApp by an embassy official two days ago,” said Sheikh Ali, a pilgrim from Kargil. The same was confirmed to us by five other pilgrims who are in Qom and spoke to The Wire over the phone.

The document, which says ‘List Of Pilgrims/Students Tested Positive for Covid-19’, includes the names, passport numbers and PNR numbers (for the flights back to India the travellers were originally booked on) of 254 Indian pilgrims and students in Iran.

It was sent to the pilgrims and students via a WhatsApp group called ‘Qom Covid Pos’, of which The Wire has seen screenshots. 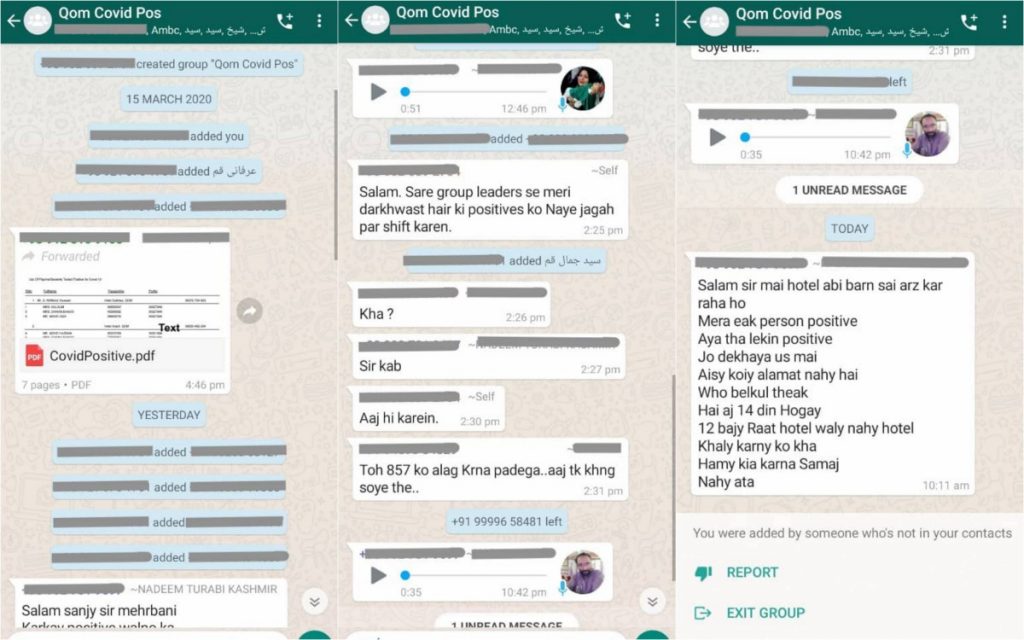 Screenshots from the WhatsApp group.

The Wire spoke to the embassy official who sent the list to the group. “I cannot comment on the authenticity of the document,” he said. When asked why he sent the document to the pilgrims and students, he said, “I was forwarded the document, so I forwarded it.” He did not disclose from whom he received the document.

Around 850 pilgrims from Kargil and Leh who are in Iran for Ziarat were tested between March 6 and March 10. “We were taken to the Indian embassy in Tehran and a nasal swab was taken,” said Ali.

On March 15, the list of those who tested positive for COVID-19 was shared with the pilgrims via WhatsApp. However, individual test results have not been shared.

“The only communication has been this list which the embassy official shared via Whatsapp. They did not tell us about any precautions that are needed to be taken or when we can go back,” said Asgar Ali, a tour operator from Leh who has also tested positive.

In two statements made to the Lok Sabha and Rajya Sabha last week, Indian external affairs minister S. Jaishankar had said that the initial focus of India’s evacuation effort in Iran was on picking up pilgrims. India had closed all flights with Iran from February 26. “Many of them are in Qom, where Coronavirus incidence has been strong. The nature of residency also increases the risks of exposure. Age is also a factor to be taken into account,” he said on March 13.

Iran was the first country that India sent a medical team to collect samples, which were then shipped back to India for testing at the National Virology Institute in Pune.

There were some raised eyebrows when the first and second batch of evacuated pilgrims last week numbered just 58 and 44, even after an Indian Air Force plane was sent to pick them up.

Officials had then stated that the numbers were small as many of the pilgrims who were listed in the flight did not board, as their family members were forced to stay back. However, none of the public statements by the Indian government has made reference to positive cases among Indian nationals in Iran.

Thereafter, there were mixed flights of pilgrims and students which bulked up the numbers.

In total, 389 Indians have returned from Iran by special flights until March 16, which include 205 pilgrims. Overall, there were 1,100 pilgrims among the 6,000 Indian nationals in Iran when the coronavirus outbreak hit the country. 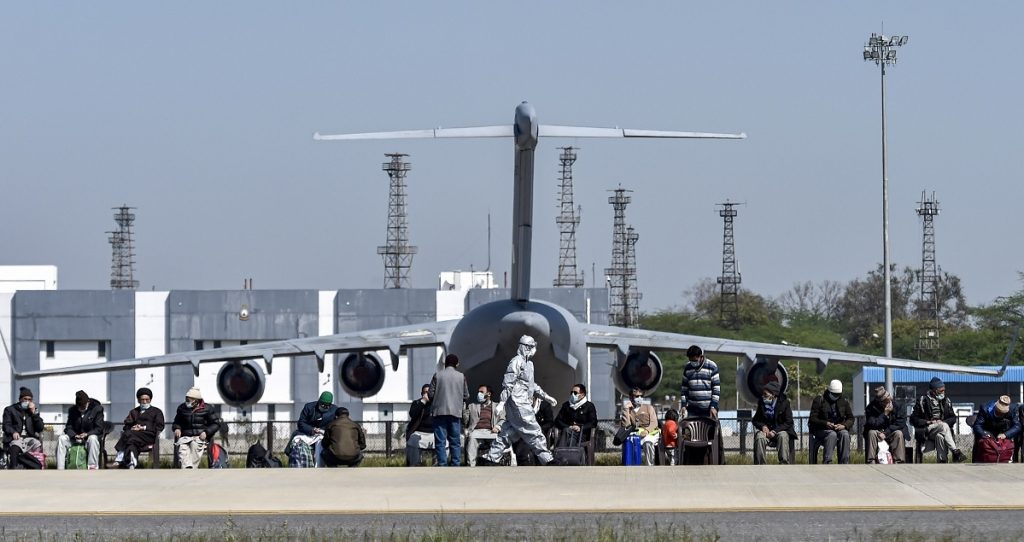 The IAF aircraft which brought back 58 Indians from Iran. Photo: PTI

So far, India has officially only said that there are 17 Indians who have tested positive in foreign countries. These include 16 among the crew on board the Diamond Princess cruise in Japan and one in the UAE. All of them remain abroad.

During the Diamond Princess quarantine, the Indian embassy in Tokyo had given regular updates on Indians who had tested positive.

There is now a clear policy that India will not bring back those who have tested positive for the infection, which is also reflected in the requirement for a negative certificate from several countries.

At the MEA briefing on March 12, the government said that they expected that the countries where Indian citizens had been diagnosed positive would provide good treatment to them. “The affected individuals are also a risk to their own countries… If Indians test positive elsewhere, we would expect the country they are in to take care of them like we are doing with the foreign nationals (here),” said MEA coordinator for COVID-19, additional secretary Dammu Ravi.

When The Wire contacted MEA officials about the ‘list’, they did not want to authenticate it, but were aware that such a document was being circulated outside. Officials also admitted that there were several positive cases among the Indian pilgrims as detected by the tests, but did not want to release any numbers as it could cause anxiety.

Also Read: Coronavirus: Why India Will Pay a Great Price Without a National Task-Force

They pointed out that it was not possible that all the tests of the Indian pilgrims would have come out negative, as they were located in Qom – the epicentre of the outbreak in Iran.

At the daily inter-ministerial press briefing on coronavirus on Tuesday evening, Dammu Ravi was asked several times about Indians in Iran testing positive. “Of course in a situation like that, you will find some positive cases given the extensive spread of virus in Iran. Rest assured that every care is being taken by mission in cooperating and coordinating with the government of Iran for safety of Indians there,” he said.

While he indicated that there were positive cases among Indians, he refused to give any numbers or to verify the list. “I can’t confirm whether the list it’s authentic or not,” he said.

According to the World Health Organisation, 14,991 people in Iran have been infected by the virus and 853 have died, as on March 16. The Islamic Republic has, therefore, reported the third-highest number of cases after China and Italy. 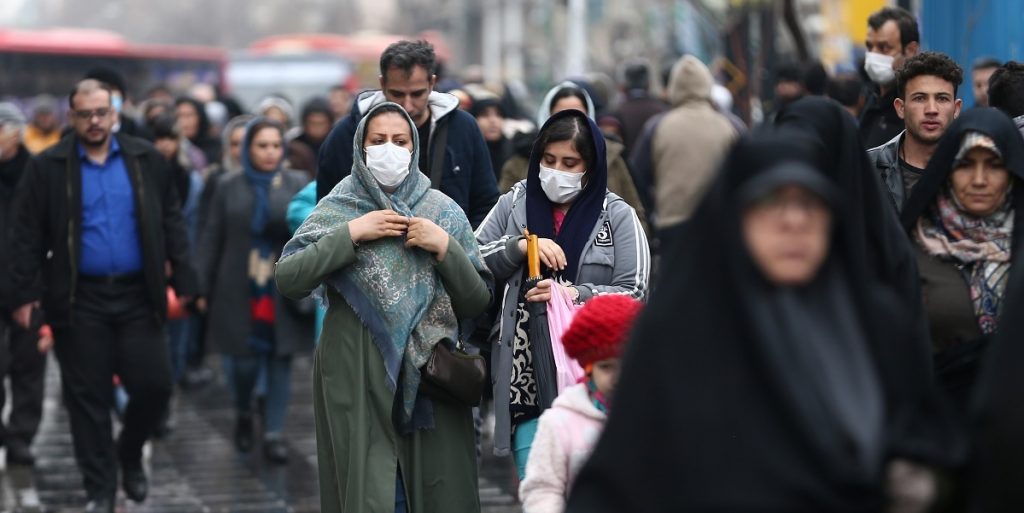 “We have ensured that those who have the infection are on one floor while those who have tested negative are on the other floor. The embassy did not tell us to do this, we are doing this on our own,” said Mohammed Hussain from Kargil who is part of the group and has also tested positive as per the list. MEA officials, however, told The Wire that the Indian government was bearing the costs.

But in some other hotels, those who have tested positive continue to live with those who are not infected according to the list.

Asgar Ali told The Wire that in the hotel that he was staying, around 60 pilgrims were residing together. “Around 24 are infected. But everyone is together here. So now we don’t know who is infected and who is not. No help has come from the embassy,” Ali said.

Given the proximity of the people in the group – between four and six people are staying in one room – there is a likelihood of those who were infected have passed on the infection to those who were not at the time the tests were done.

Some people who have pre-existing conditions have been admitted to hospitals, according to Sheikh Ali.

“There are four elderly people who have lung issues and are feeling sick. They have been admitted to local hospitals with the help of some locals. So far they are ok and are in the general ward,” said Ali. “But the embassy has not helped us at all. They are not even communicating,”  he alleged.

The pilgrims are a worried lot. “We don’t know what is going to happen. Local doctors don’t understand our language. We are running out of money. But we don’t know what the government is planning to do with us. We have heard that those have been tested negative will be taken on flights. But what happens to the rest of us?” asked Mohammed Hassan, who is also stuck in Qom and has tested positive, according to the list.

Note: The article was updated with MEA coordinator for COVID-19, additional secretary Dammu Ravi’s comments from the media briefing.