While the productivity of both Houses was fairly good in this monsoon session, they sat only for 16 days.

The monsoon session of parliament concluded last Friday. This was one of the most productive sessions of the 16th Lok Sabha, with 18 bills being passed. This session also witnessed discussion on the first no-confidence motion against this government, which was also the first one since 2003. The motion was discussed for nearly 12 hours by 51 members, at the end of which it was defeated. Rajya Sabha also conducted elections for its deputy chairman. In light of this, we discuss the functioning of parliament during the session.

In this session, Lok Sabha worked for 110% of its scheduled time, tying it with the monsoon sessions of 2000 and 2005 as the most productive monsoon session of Lok Sabha. On the other hand, Rajya Sabha’s productivity was 68%. It lost nearly 33 hours due to disruptions, including on account of protests against Assam’s draft National Register of Citizens.

Both houses spent nearly half their time on transacting legislative business. 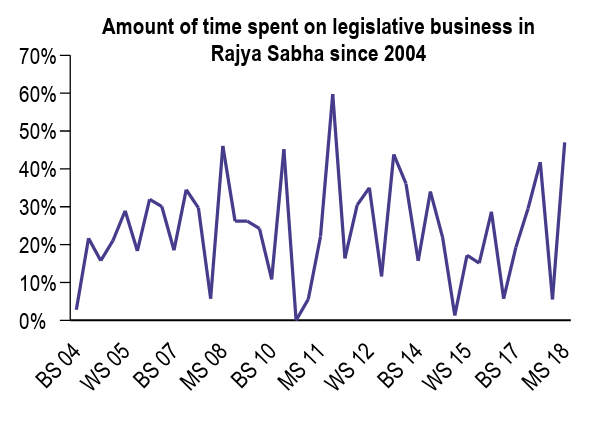 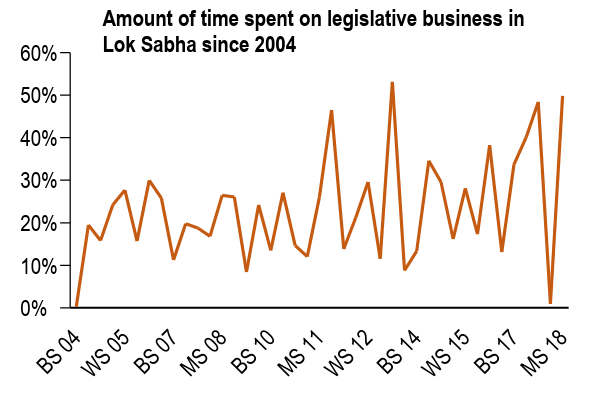 The government had a packed legislative agenda ahead of this session. Eighteen bills were listed for introduction and 43 bills for passage. Both Houses spent nearly half of their time discussing legislative business. This was the highest proportion of time spent by both Houses on legislative discussion in the 16th Lok Sabha, and the second highest since 2004. At the end of the session, 20 bills were introduced, and 18 bills were passed by parliament.

Note that the Bills replacing ordinances are required to be passed by the parliament within six weeks of the commencement of the next session, failing which the ordinances lapse. All six ordinances were passed in this session. So far in the 16th Lok Sabha, 39 ordinances have been issued, an average of nearly ten ordinances per year. While ordinances are issued by the executive to bring legislative changes in areas which require urgent attention, there is a need to create space for wider deliberation and expert inputs on such changes. Moreover, since ordinances have to be passed within a specific time frame, they are often passed by parliament without detailed scrutiny and rigour that is typically seen in case of other Bills.

Some other key Bills passed by both the Houses included the Constitution (One Hundred and Twenty-Third Amendment) Bill, 2017 (creating the National Commission for Backward Classes), the Prevention of Corruption (Amendment) Bill, 2013 and the Scheduled Castes and the Scheduled Tribes (Prevention of Atrocities) Amendment Bill, 2018. In addition, the Lok Sabha also passed four money bills which amend laws related to the Goods and Services Tax. All four money bills were passed within two days of introduction.

Among the Bills passed, 12 were introduced and passed in the same session by at least one House, without referring them to a Parliamentary Committee. Fewer Bills are being referred to Parliamentary Committees (26%) in this Lok Sabha, as compared to the 15th Lok Sabha (71%) and the 14th Lok Sabha (60%). In this session, the Ancient Monuments and Archaeological Sites and Remains (Amendment) Bill, 2017 and the Banning of Unregulated Deposit Schemes Bill, 2018 were referred to committees.

Passage of bills in such a short span of time gives the members lesser time to examine bills in detail, and leaves little scope for consultations with stakeholders. Parliamentary Committees provide a forum for the detailed examination of bills and for consultations with independent experts and stakeholders. This session witnessed the passage of many bills by both the Houses, which dealt with issues requiring detailed examination before passage. For example, the Criminal Law (Amendment) Bill, 2018, increases the punishment for rape of girls. However, the punishment for rape of boys remains unchanged, which further widens the difference in the quantum of punishment for rape of minor boys and girls. The Fugitive Economic Offenders Bill, 2018, which was also promulgated as an ordinance, allows any court or tribunal to bar an offender or an associated company from filing or defending civil claims before it, which may violate Article 21 of the constitution, i.e. the right to life.

Parliamentary Committees enable detailed scrutiny of bills, that may not be possible on the floor of the House due to the paucity of time. While examining a bill, committees engage with a diverse range of independent experts and stakeholders. These consultations help in strengthening the provisions of the bill and allow for detailed consideration of legislative issues.

For instance, during the session, the Financial Regulation and Deposit Insurance Bill, 2017 was withdrawn on the recommendation of a joint committee following apprehensions raised by stakeholders about several provisions of the Bill, including the use of a bail-in instrument to resolve a failing bank.

With two sessions left in the 16th Lok Sabha, parliament is tasked with the passage of 66 pending bills, of which 40 have been introduced by this government. These include the Muslim Women (Protection of Rights on Marriage) Bill, 2017, the Whistle Blowers Protection (Amendment) Bill, 2015 and the National Medical Commission Bill, 2017.

Though the productivity of both Houses was fairly good in this monsoon session, the Houses sat only for 16 days. This impacted their ability to discuss various issues of public importance. For example, in this session, both Houses were scheduled to discuss challenges in the agriculture sector, state of the economy and rising unemployment, which could not be taken up. The Leader of Opposition, Rajya Sabha, argued on the last day of the session that more proportion of time should be allocated to discuss the issues of public importance raised by the opposition. To provide the opposition parties an opportunity to raise their issues, legislatures in some democracies, such as the UK and Canada, allow the agenda of discussion for some days to be set by the opposition.

The leader of opposition also argued for an increase in the number of sittings to facilitate wider discussion. Over the years, there has been a decline in the sitting days of parliament. While Lok Sabha met for an average of 130 days in a year during the 1950s, these sittings have reduced to 70 days in the 2000s. A lesser number of sittings directly translates to lesser business being transacted in parliament. In fact, several members took up discussion on a private member bill which proposed to increase the minimum number of sittings in a year to 100 and discussed various ways in which productivity in parliament could be improved.

It remains to be seen if the suggestions of the members will be considered while planning the schedule for the upcoming winter session. Increasing the number of sittings is one of the ways which can help parliament in fulfilling its mandate more effectively.