Whatever Action Is Taken Against Dharma Sansads, BJP Gains Electorally

Narsinghanand has claimed that the Dharma Sansads were being organised once every six months. Why, then, were three such events planned in the space of a little over a month, with two of them in poll-bound UP? 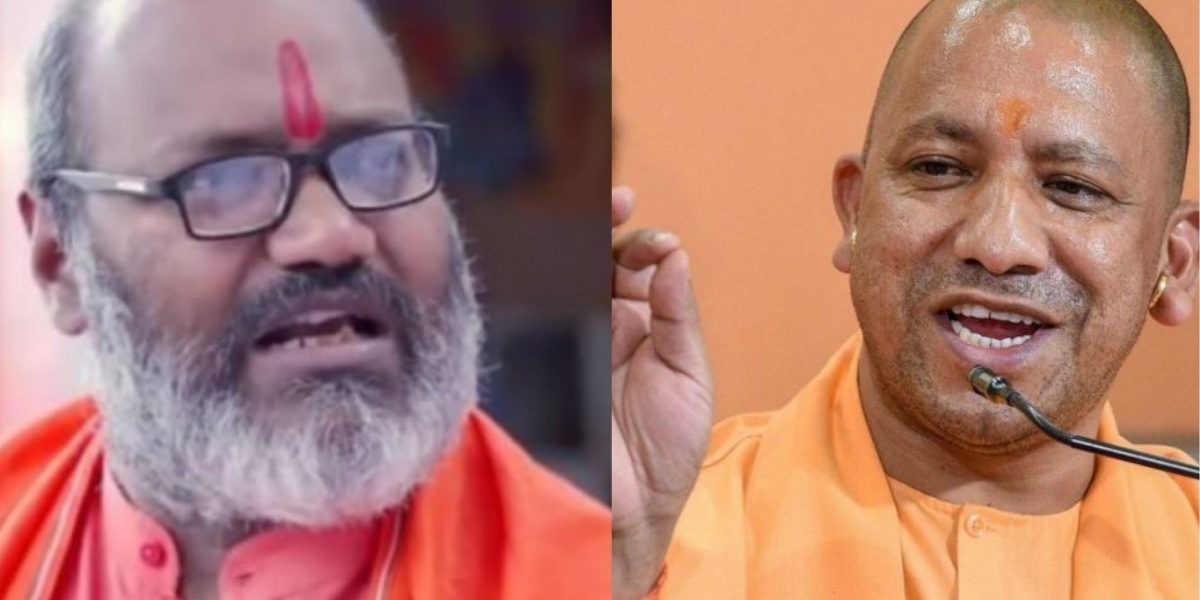 The speeches made at the so-called Dharma Sansad (literally, religious parliament) organised at Haridwar from December 17-19 warrant even sedition charges, among others.

However, the police obliged the organisers by registering a case under only Section 153A (promoting enmity between groups) of the Indian Penal Code. In an earlier article, I had pointed out that, given the innuendos and vagueness in many of the statements made therein, the case will be weak ab initio.

The case was registered first against a recent convert to Hinduism, namely, Jitendra Narayan Singh Tyagi, formerly known as Waseem Rizvi and un-named others. Now it has been reported that the police have added the names of Dharm Das and Annapurna to the FIR as well.

On December 26, journalist Alishan Jafri reported on Twitter that more such Dharma Sansads have been planned. On the same day, a video titled ‘Kyon Zaroori hai Dharma Sansad’ (why Dharma Sansad is necessary) was uploaded to YouTube by a channel called ‘Swami Amritanand’. In the nearly eight-minute long video, Yati Narsinghanand is being interviewed by someone whose microphone bears the logo of GNT-Aaj Tak.

Just In: At least 3 more Dharam Sansads on the same ge’nocidal topic announced by Narsinghanand and other Hindu religious leaders. Two in UP (Aligarh, Ghaziabad) and one in Haryana (Kurukshetra).

Cc @ghaziabadpolice in case you feel ashamed and choose to not emulate UK police. pic.twitter.com/sz6Al4xvin

In the video, recorded after the Haridwar Sansad, Narsinghanand says that the next Dharma Sansad is planned for January 1-2, 2022 at the Dasna Devi Temple, Ghaziabad, and will be followed by another such event on January 23, 2022 at Aligarh. Subsequent Dharma Sansads are being planned for Himachal Pradesh and Kurukshetra, however, their dates were not mentioned.

Narsinghanand claimed that the first Dharma Sansad was organised from September 6-7, 2012 at Deoband, which was attended by some 30,000 people. He also claimed that he was placed under arrest by the Akhilesh Yadav government and that since then, Dharma Sansads have been organised every six months. 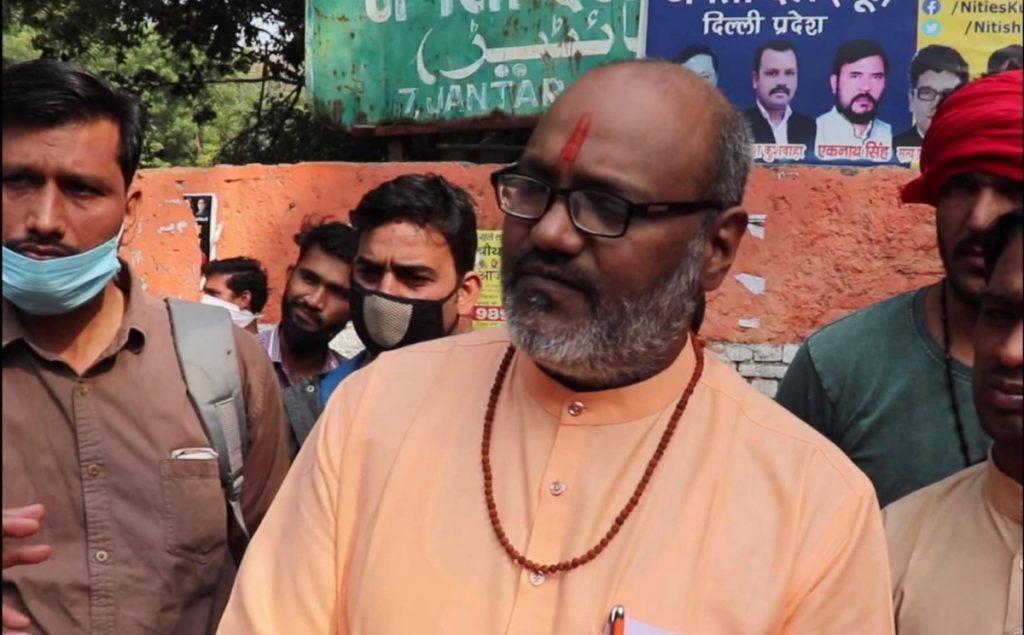 The purpose of the Dharma Sansads, in Narsinghanand’s own words

In this interview, Narsinghanand expounded upon his views and mission. He said that the main purpose of these events is to defend the Hindu Dharma; to tell the “truth” about Islamic Jihad to the Hindus; to prepare them for self-defence and to fight against Jihad. He went on to note that he does not think the government will be able to “save” the Hindus and that Jihad is a danger not only for India, but for the whole world.

When asked to explain his refrain of ‘Hindus in danger’, he said that there have been several attempts made to murder him; that recently, a man was stoned to death near Dehradun; that one B. S. Tomar was murdered and that in total, six Hindus were killed by Muslims in the past three years and lives of their daughters were being spoiled.

When it was pointed out that these were but a few incidents, he said that his belief was formed not only by these, but by 1,400 years of history. He said that Islamic Jihad was an organised crime, that Islam was a gang of organised criminals and that Muslims simply do what is written in their sacred books, which, according to him, is kill Hindus by deceit, loot their women and grab their kids.

He went on to say that the police does not take any action in these cases and that even when they do, Muslims prevent Hindus from appearing as witnesses. He further added that while the media could ignore such incidents, ‘we’ could not.

He then announced that now, Hindus will retaliate; that they would fight and defend themselves. He said it was the duty of the sadhus to fight for the defence of the Dharma and even sacrifice their lives, should the need arise. He noted that he has been waiting for the day when he would be killed by Jihadis and that while today he is a person, after his death he will become a vichar (idea). The Hindu Dharma demanded sacrifice, he said.

Why should they organise these events in such rapid succession?

As Narsinghanand said himself, the Dharma Sansads were earlier being organised once every six months. What then explains three such events being planned in the space of little over one month, two of them being in election-bound UP? Obviously, there is more to it than meets the eye.

By his own logic, the Hindu Dharma is being endangered by a design implicit in Islam. This means that, in his opinion, this has been a long-term plan of Islam. Moreover, since there has been no recent, out-of-the-ordinary development in the country, there cannot have been any precipitating cause for alarm or urgency.

It is true that no legal action can be taken against someone if they only proclaim that they are concerned about the future of their religion and that they want to defend it. As I had explained in my earlier article, speaking in terms of ‘ifs’ or expressing the desire to do something should ‘such-and-such’ thing happen, does not attract legal action.

However, since Hindus have supposedly been subjected to harm for the past 1,400 years and since the nature of the government and polity has not changed materially since independence, their concerns, by Narsinghanand’s own logic also, would need to be addressed over a long time. Why this new-found urgency then, implicit in the sudden burst of Dharma Sansads?

The ulterior motive can logically be only electoral advantage

In this light, the most probable objective of these numerous Dharma Sansads is to secure some electoral benefits for the BJP by polarising Hindu votes, cutting across caste lines, even if these Hindutva groups have no ostensible relationship with the party.

Also read: Narendra Modi and the Bloodthirsty Dharma Sansad Speakers Are Closer Than Most People Think

The splitting of the Hindu vote along caste lines is the major source of worry for the BJP in UP, going up against parties like the Samajwadi Party (SP) and the Bahujan Samaj Party (BSP) whose support is primarily caste-based. How this would work out is explained below. 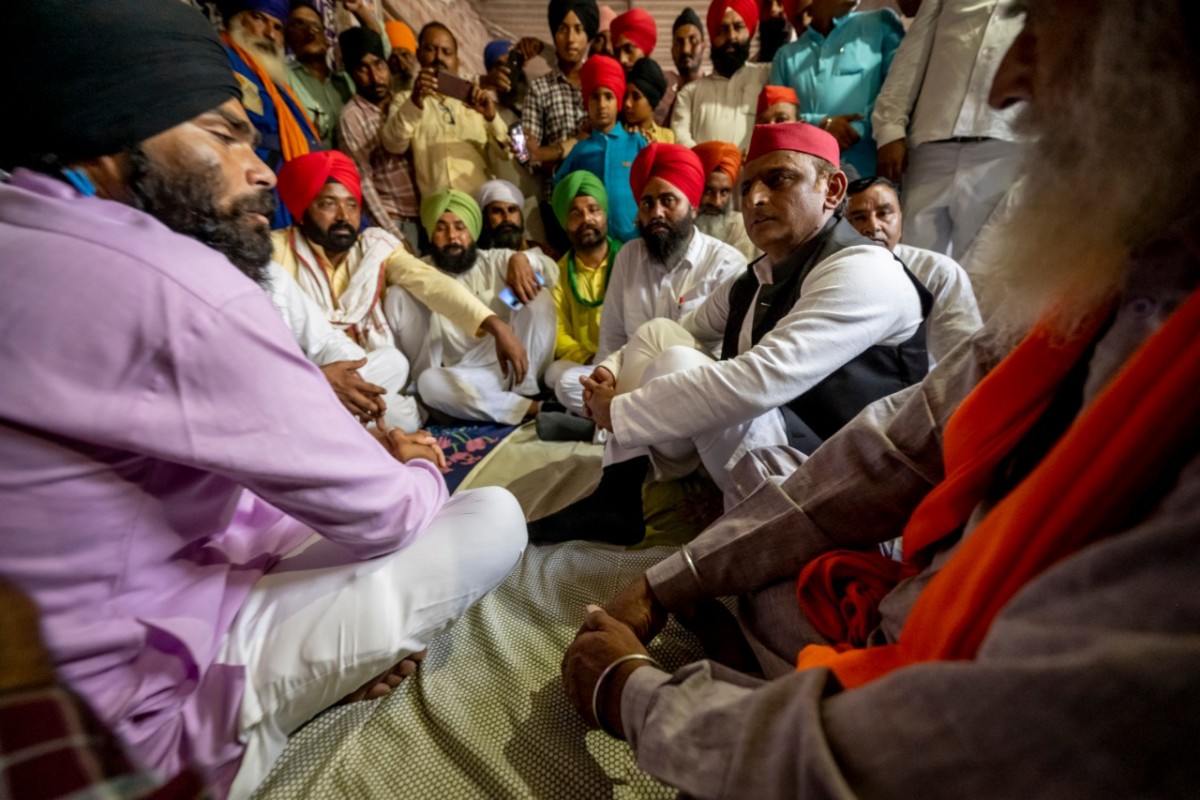 The Hindutva groups could have two designs in mind: The first could be to provoke some of the Muslims in the country to make some irresponsible statement in response to their fulminations. Social media is already abuzz with the statements some certain Muslim leaders, dredged up and made to look like they are threatening revenge on Hindus. Since those statements have obviously been distorted or quoted out of context, I am not citing them here.

Waris Pathan (@warispathan), spokesperson of AIMIM, hits out at the BJP for what happened in Dharma Sansad.
He also says that Asaduddin Owaisi’s speech had no hate; a section of his speech was being circulated without context.#Newstrack | @RahulKanwal pic.twitter.com/tBPqSD32HY

In a country of our size, it is reasonable to expect that some Muslim person would say some such inflammatory thing which could then be used to incite Hindus by saying, ‘Look, this is what the Muslims really are’. Their utterances can be used profitably to rally the Hindus for electoral advantage.

The second design could be to provoke the government into arresting them. Such arrests can easily be turned into ceremonial events by the visual media supportive of their cause. These Hindutva personalities might even manage to make a few statements before being bundled into the police bus; statements which would be repeated ad nauseam on these news channels, serving the same purpose as an actual Dharma Sansad.

These clips could then be circulated to the WhatsApp circuit and on other social media, framed as if these leaders had sacrificed their liberty for Dharma Raksha (to protect their religion); another clarion call for the Hindus to unite against the common danger of Islam. And what better way would there be for these diligent Hindus to give expression to their support except in the upcoming election?

In his interview, Narsinghanand said that he was apprehensive that the administration might not permit the second Dharma Sansad at Ghaziabad to take place. Such a refusal is possible, particularly with the elections around the corner. The Mathura district administration had already denied permission to the Sri Krishna Janmabhoomi Mukti Dal for organising a public meeting and ‘sankalp yatra’ on December 6.

The state government obviously does not want any development to take place that could adversely affect its major electoral plank of having maintained excellent law and order in the state. If they, by any chance, allow the the event to take place, it will once again help consolidate Hindu votes.

However, the organisers of these Dharma Sansads can take advantage of these denials of permission as well. While saving the government from embarrassment on one hand, these groups could still carry out their propaganda through other means such as YouTube, Facebook, WhatsApp and the like, if permission to host a physical event is denied.

They have thus placed the entire opposition (and the country) in a lose-lose situation. Whatever action is taken against them, it will only go on to bring electoral advantage to the BJP by rallying and consolidating Hindu votes, cutting across caste lines.

Dr. N.C. Asthana is a retired IPS officer and a former DGP of Kerala. Amongst his 49 books, the latest book ‘State Persecution of Minorities and Underprivileged in India’ has been reviewed by Justice J. Chelameswar (Retd) of the Supreme Court.)