Coercive tactics should find no place in achieving the aim of an open defecation free India. 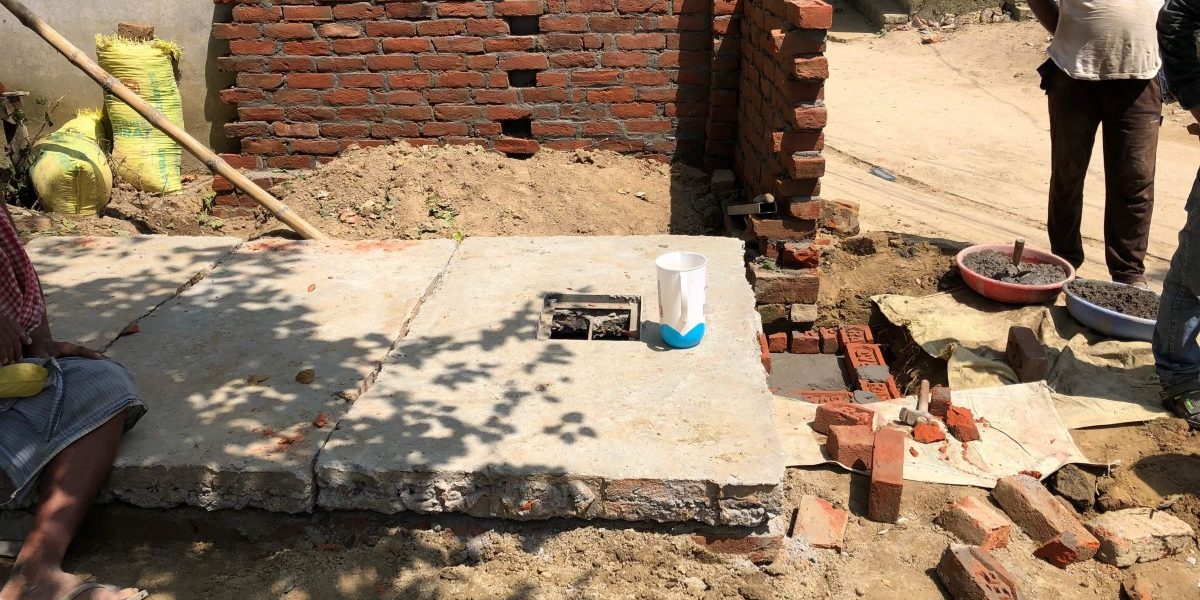 Under construction toilets in Bibipur, Lucknow. These are not the kind of toilets prescribed for rural India under the SBM. Photo: Kabir Agarwal

“Toilet is the number one priority these days. It has crowded out all other government programmes,” a rozgar sevak in Uttar Pradesh promptly replied when asked about different government schemes that were being run in the village. Minutes later, he enlightened everyone around with an explanation of how a twin-pit latrine works. “One pit is used at a time. And when it fills up, it is blocked to decompose, and the family can start using the second pit. A year later, faeces in the [first] pit is decomposed and can be used as fertiliser for crops,” he said.

The excitement in this rozgar sevak’s voice was a sign of his engagement with the programme. In another conversation, a district Swachh Bharat Mission (SBM) coordinator described the difference between SBM and its predecessors as, “[During SBM], we did not work as if it were a government programme, we worked as if we were managing our beti ki shaadi (daughter’s wedding). We would wake up early in the morning and call it a day only late at night.” The fact that this district coordinator used managing his daughter’s wedding as an example shows his dedication and hard work.

We are part of a team that – in late 2018 – revisited families whom we had visited in 2014 in Bihar, Madhya Pradesh, Rajasthan and Uttar Pradesh. We wanted to learn about changes in open defecation between 2014 and 2018, and to do so, we collected information on the defecation behaviour of close to 10,000 individuals. We also talked to 156 local government officials about the process of implementing the SBM.

We learnt certain facts from the study. Between the two surveys (2014 and 2018), the percentage of people defecating in the open reduced from about 70% to approximately 40%-50%. That is, open defecation continues to be a threat to child health in India. Between these two surveys, latrine coverage increased by 34 percentage points, which was a much faster rate than before, but it was nowhere close to 100% even in states that have already been declared ODF. Because open defecation continues to be a reality in rural India, it is important to pay a close attention the lessons that can be learnt from the way SBM was implemented.

“There is a flower, the periwinkle. We greet people and put that around their necks early in the morning…We don’t fight with them, we just insult them a bit. We make them feel a bit ashamed of themselves, we make them feel a bit disgusted with themselves,” a swachhagrahi in Uttar Pradesh explained when asked about the process of triggering behaviour change to build and use a latrine. Local officials often casually reported that they withheld public distribution system food grains and other government benefits to compel people to build latrines. And in many cases, they even threatened villagers with fines and sometimes even with jail terms.

A pradhan in Uttar Pradesh believed that to help SBM achieve its goal of an open defecation free (ODF) India, it would be essential to give severe punishments to people who do not use a latrine. It should be such a punishment that people remember it, it should hurt. It is like when you hit people lightly, then they will walk away laughing, but if you hit them hard, then it will sting for a while.”

Wherever we went, coercion in some form or the other was common. In our survey, we asked people if someone in their family was physically stopped from defecating in the open; whether anyone in the household was threatened with the loss of government benefits; and whether anyone in the family was threatened with fines. Of the families we talked to, 12% said that someone in their family or they themselves had faced one of these forms of coercion. Also, more than half the families were aware of at least one of these coercive tactics being used in their village; one in every four families told us that they have heard of government benefits being withdrawn for not having a latrine.

Local officials often talked about the pressure and threats that they received from their bosses. The husband of a sarpanch in Madhya Pradesh explained that the interest that district-level officials took in the SBM was a refreshing change: “The government officials have come out of their offices and have started to see what all is going on in the villages. Let me tell you, they’ve come very early in the morning. People like the collector and the deputy collector. Those poor guys have come in their [exercise clothes] at 6 am.”

A few were so frightened at the prospect of losing their jobs that they even got their family members to work. A block coordinator told us, “They tell us that if we don’t get 700 toilets built…then we will be fired…the threat is there, we have been given notices…there is so much work that do you know what I do? I get my wife to do the online data entry because I just can’t manage it all.”

‘Upper’-caste Hindus were often requested and even directed to be on the vigilance committees in villages meant to enforce SBM. A block-level official, while explaining the process of putting together a vigilance committee, told us, “Members usually include the sarpanch, the MLA, a ward member and other respected people who the villagers listen to or even fear, such as lambardars [powerful zamindars].” The official said that these were the people they rely on in persuading villagers to construct and use latrines.

The fact that village vigilance committees were often dominated by upper caste Hindus explains why we observed a pattern in coercion threats in our survey. We found that as compared to other social groups, Dalit families were twice as likely and Adivasi families thrice as likely to report facing coercion and threats. Several videos that are available on the internet show rich high-ranking officials flexing their muscles on poor villagers in the name of Swachh Bharat. Often these videos were shown as positive media coverage of SBM.

A sarpanch’s husband in Madhya Pradesh correctly pointed out the problem that people in his village do not want twin pit latrines that the government recommends: “What is going on is that people do not use kachha toilets. And so it was a problem that we had to build kachha toilets for people. By “kaccha,” I mean the soak pit one. Like the one that is in the Akshay Kumar ad that keeps playing on TV…people do not pay attention to this. They say that they only want a pakka toilet.”

By focusing on construction and not talking freely about beliefs around ‘purity’ and untouchability that discourage the use of simple latrines, the SBM missed a behaviour change opportunity. As a result, despite an increase in latrine coverage, almost one in every four rural Indians who has access to latrine continues to defecate in the open. This proportion is very similar to what we observed in 2014. Meaning, SBM did manage to build a lot more latrines, but it failed to change people’s preference for open defecation.

Five years after the start of SBM, everyone who worked hard for behaviour change and didn’t resort to coercing people in the name of toilet construction or use deserves our appreciation. Such efforts included a few government officials going down a latrine pit filled with decomposed faeces and demonstrating to villagers that it is socially acceptable and safe to do so. Another such effort was the initiative of the Akola zila parishad in Maharashtra, which decided to give participants of Mahatma Gandhi’s 150th birth anniversary celebration in Ahmedabad a 100 grams jar filled with organic manure. SBM should also be congratulated for an unprecedented increase in latrine coverage in rural India.

But this moment of celebration must not make us forget that for the sanitation requirements of all Indians are far from fulfilled. We shouldn’t loose sight of the fact that a large fraction of rural Indians still defecate in the open, and that India still needs a sanitation policy to address rural open defecation. The next rural sanitation policy must have adequate resources – both monetary and human – and it must pledge to not use coercive tactics.