Bengal School Recruitment Scam: How the Court Brought Employment Masters to Their Knees

Unearthing of the scam has left Trinamool Congress spokespersons speechless. 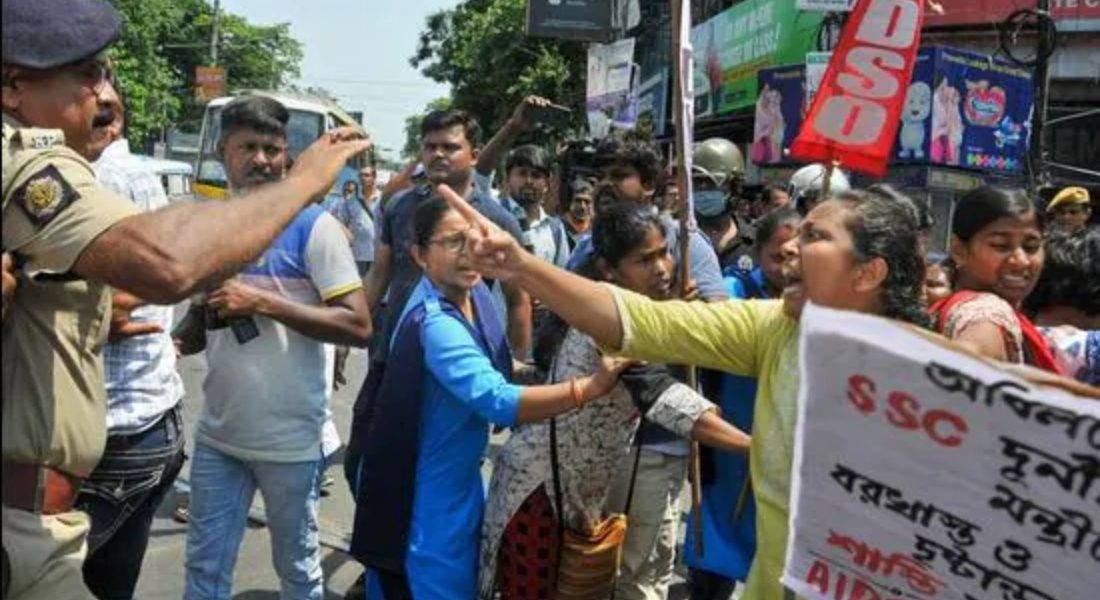 This is the first article in a three-part series on the Bengal school recruitment scam.

Kolkata: At least 609 illegal appointments in group D employees’ posts, 381 in clerical (group-C) posts and a yet-to-be determined number of posts for assistant teachers for classes IX and X at government-sponsored and aided schools in West Bengal during 2019-20 have so far been unearthed in the course of a series of investigations by a single-judge bench of the Calcutta high court and a retired-judge-led committee appointed by a division bench over the past six months.

This series of investigations into alleged irregularities in recruitments started after three separate petitions were filed in the Calcutta high court in August-September last year, by job aspirants Sandeep Prasad, Sabina Yeasmin and Setab Uddin, providing a few specific examples of irregularities in recruitments in the three categories. More cases were unearthed during the course of the hearing as the judge kept asking for various documents and more petitioners joined in with more examples.

“It is prima facie clear that serious irregularities were noticed and recorded by the Hon’ble Single Bench in the appointments to the three categories,” a Calcutta high court division bench said in its May 18 order, while upholding the orders passed by a single-judge bench that directed investigations by the Central Bureau of Investigation (CBI) in connection with as many as seven cases between November 22, 2021 and April 14, 2022. An eighth CBI investigation was ordered on May 20.

The proceedings so far have resulted in the court-ordered sacking of those who got their jobs illegally, who are also to return every rupee they received as salaries since appointment, besides having to face the CBI to explain how they managed to bag their appointments.

Former education minister Partha Chatterjee, one of the top leaders of the Trinamool Congress (TMC) and a close confidante of chief minister Mamata Banerjee, and Paresh Adhikary, the current junior minister of the department, have already faced CBI questioning multiple times.

The CBI also interrogated several top former and present officials of the West Bengal Central School Service Commission (WBCSSC, commonly referred to as the SSC), which is at the centre of what the division bench of Justices Subrata Talukdar and Ananda Kumar Mukherjee termed as a “public scam” in its May 18 order.

Minister Adhikary’s daughter, Ankita Adhikary, has also lost her teaching job and is supposed to return 41 months of salary in two instalments by July 7.

Besides this, the court-appointed committee has recommended criminal proceedings (registering an FIR) against the former chairperson, secretary, programme officer and advisor of the SSC as well as the former president of the West Bengal Board of Secondary Education (WBSEB) and disciplinary action against some others.

This has turned the SSC recruitment scam out into the biggest of its kind during the TMC rule of 11 years – perhaps only after the Sarada chit fund scam of 2013. According to political observers and the opposition, it is even bigger than the Narada cash-for-favour scam of 2016. Multiple benches of the Calcutta high court, however, have estimated that what has come to the fore might just be the tip of the iceberg.

While the Saradha scam had come to light on its own and the Narada scam was exposed as the result of a sting operation, the SSC recruitment scam has been unearthed largely due to the zeal and steadfastness of the Calcutta high court bench of Justice Abhijit Gangopadhyay, whose series of orders were initially stayed by one division bench but finally upheld by the division bench of Justices Talukdar and Mukherjee in their 115-page judgment on May 18.

Meanwhile, over the past three months, the high court premises stood witness to many a storm and drama – from Justice Gangopadhyay passing order criticising a division bench that stayed his order, and his letter to the chief justice of India (CJI) seeking intervention regarding his orders being stayed, and subsequently multiple division benches declining to hear appeals against Gangopadhyay’s orders, to pro-TMC lawyers boycotting his court for three weeks and writing to the CJI complaining against the judge.

Finally, on May 18, the division bench of Justices Talukdar and Mukherjee gave Justice Gangopadhyay a free hand when it said, “The orders impugned of the hon’ble single bench require no intervention,” and added, “single bench shall be entitled to direct investigation and collection of further facts, including any money trail, as considered necessary.”

Justice Gangopadhyay had earlier allowed the CBI the liberty to grill any influential person they deem fit and make custodial interrogations if necessary. He will closely  monitor the CBI’s progress, he had said. 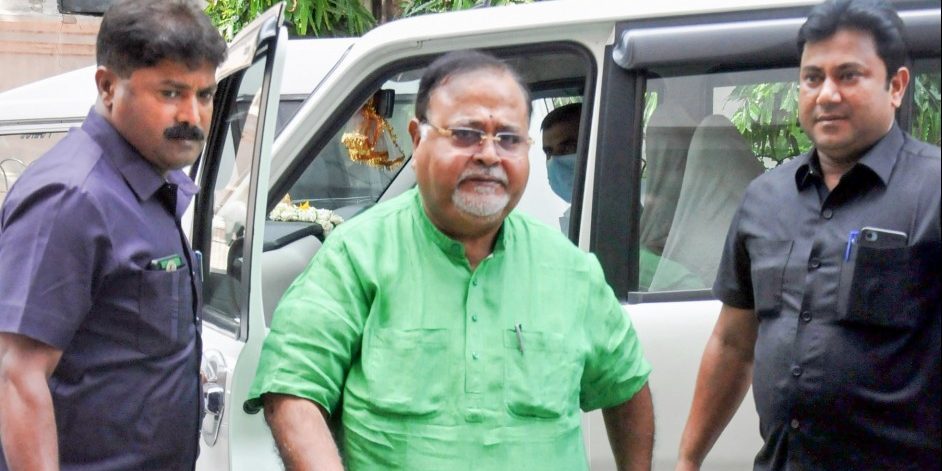 Though Chatterjee moved a special leave petition in the Supreme Court on May 19, challenging the high court order, it has not come up for hearing yet.

Meanwhile, Justice Gangopadhyay has asked to add Chatterjee as a respondent in four other cases, as he refused to believe Chatterjee was unaware of the illegal appointments. The appointments were carried out by a five-member committee formed with Chatterjee’s approval and of which the minister’s officer on special duty (OSD) and private secretary were members, the judge pointed out. The CBI has also asked for Chatterjee’s bank statement.

However, it is the convenor of that committee, Santi Prasad Sinha, a retired professor of mathematics, whom the court holds as the kingpin till now.

In the May 18 ruling dismissing a set of appeals against Justice Gangopadhyay’s series of orders, the division bench said, “On the basis of the facts so far available before the hon’ble courts it is prima facie evident that the appellants are individually and collectively culpable for their role in the public scam.” The appellants included not only individual officers but also the SSC and the state education department.

“The apprehension raised by the SSC (over justice Gangopadhyay’s alleged predisposition against them) reveals an inadequacy to deal with the truth,” the division bench said, adding that it was no less surprising that the SSC, a statutory body intended to act for public good, “allowed its powers to be supplanted and subverted by a so-called Super Committee for giving effect to large scale illegal appointments of Assistant Teachers in Classes IX and X, Group – C and Group – D Posts.”

“No less surprising is the fact that the SSC has even gone to the extent of filing an appeal to defend the action taken by the appellants and has been joined by the State, more precisely represented by its School Education Department, in filing an analogous appeal,” said the order.

“Some people are talking big. They used to make appointments on the basis of handwritten notes during the 34 years of the CPI(M) (rule). I have made detailed inquiries. Will open the chapters one by one. It’s only out of courtesy that I did not do so till now,” she said, while addressing a rally in Jhargram on May 20.

It was, incidentally, the same day when Justice Gangopadhyay dismissed Paresh Adhikary’s daughter from her teaching job, barring her altogether from ever entering the institution. It was the same school where Ankita Adhikary studied and is at a walking distance from her residence.

Paresh, who was originally a Forward Bloc leader, served as a minister in the Left Front government. He joined the TMC in August 2018, soon after which his daughter’s name appeared on top of the panel out of nowhere. He became a minister after Mamata Banerjee’s return to power in 2021.

Notably, Asok Bhattacharya, former Left Front minister who was a CPI(M) MLA from Siliguri in Darjeeling district until 2021, had written to education minister Partha Chatterjee, seeking his intervention, right after Ankita’s fortune came to the fore in September 2018. The case was “a clear example of how the ruling party is using favour to win over leaders of opposition parties,” Bhattacharya had alleged. This, however, did not change anything.

While Left student and youth wing members have recently staged some agitations, the chief minister’s main reason for ire against the Left could be because of CPI(M) Rajya Sabha MP Bikash Ranjan Bhattacharya, a senior advocate, who is playing an important role representing a batch of petitioners who dragged the SSC to court.

Court records and accounts of the lawyers, however, show that if any single individual is to be credited or blamed for the truth that has now come to the fore, it is Justice Gangopadhyay, who often examined the accused persons in greater detail than the battery of lawyers.

He made his guiding philosophy quite clear before ordering the third CBI enquiry on March 3 – this one in connection with teacher recruitment – when in his order he quoted from Rabindranath Tagore’s famous poem ‘Where the mind is without fear,’ the line he translated as “…where technicalities have not gulped the course of justice.”

This was his inspiration behind rejecting all ‘technical points’ that the SSC’s lawyers raised to dissuade the court from taking actions.

“I alone am enough for those who bagged jobs illegally. I have declared a war against corruption and I will unearth the money trail,” he was quoted as telling the state government lawyer during a hearing on April 6.

In its May 18 judgment, the division bench made it clear that “both the State of West Bengal and the SSC arrived before the Hon’ble Division Bench by way of separate appeals” after being “unable to stop the course of investigation initiated by the Hon’ble Single Bench”.

How the single bench carried out its focused investigation will be discussed in the second part of the three-part-series.