We Know the ‘Harvard’ Study on UP is Not from Harvard. It’s Also Not Much of a ‘Study’.

The report, which a senior UP bureaucrat helped 'from conceptualisation to completion', lists out official claims about how the Adityanath government acted, without assessing what the impact of its policies actually were on the ground.

The report makes no mention of this infamous incident from March 30, 2020, when healthcare workers, in protective suits, used a hosepipe to spray disinfectant on migrant workers before allowing them to enter the town of Bareilly. Photo: PTI

Last week, as reported cases of COVID-19 witnessed an unprecedented spike in Uttar Pradesh and the rest of India, several news outlets ran breathless stories about how a study by Harvard University had lauded the Yogi Adityanath government’s handling of the migrant crisis last year.

While most of these outlets are obscure or openly identified with the Bharatiya Janata Party, the Hindustan Times was the only national newspaper to carry the news item. Its story was datelined Lucknow and ran with the headline, ‘Harvard study praises UP Govt for its handling of migrant crisis during pandemic’.

The Hindustan Times story, like all the others, gave no details about this ‘Harvard study’ – no title or authorship or link or methodology. The only information the newspaper provided was that this study had been “shared by the government”. Others said they had obtained the story through an unnamed UP government spokesman.

“The spokesman said the Yogi government worked towards the multi-fold agenda of providing transportation facilities, delivering ration kits, and running healthcare centres for migrants,”  Times Now said. Times Now is owned by Bennet Coleman Company Ltd, publishers of the Times of India. The exact same sentence also appeared in the HT and in the story carried by the pro-establishment Swarajya magazine.

The only problem with these stories is that the 72-page report in question – a copy of which is with The Wire – is not from Harvard but Haryana. And it is not much of a ‘study’ either, being bereft of the kind of references or field-based evidence one normally associates with a research paper. Worse still, the report does not even say some of the things the UP government claims it does.

For example, the Hindustan Times reported:

“The Yogi Adityanath government in Uttar Pradesh (UP) handled the migrant crisis most adroitly…  according to a study by Harvard University shared by the government.”

However, these words do not appear anywhere in the ‘study’.

According to AltNews, these reports were all the result of a message shared by a UP government official on a WhatsApp group for correspondents, many of whose publications simply cut and paste the government handout and passed it off as their own story.

Had any of these media outlets insisted on some corroboration of the UP government’s claims, they would have realised that the ‘study’ in question was not by Harvard or any of its schools or departments but by the Gurgaon-based Institute for Competitiveness (IFC). 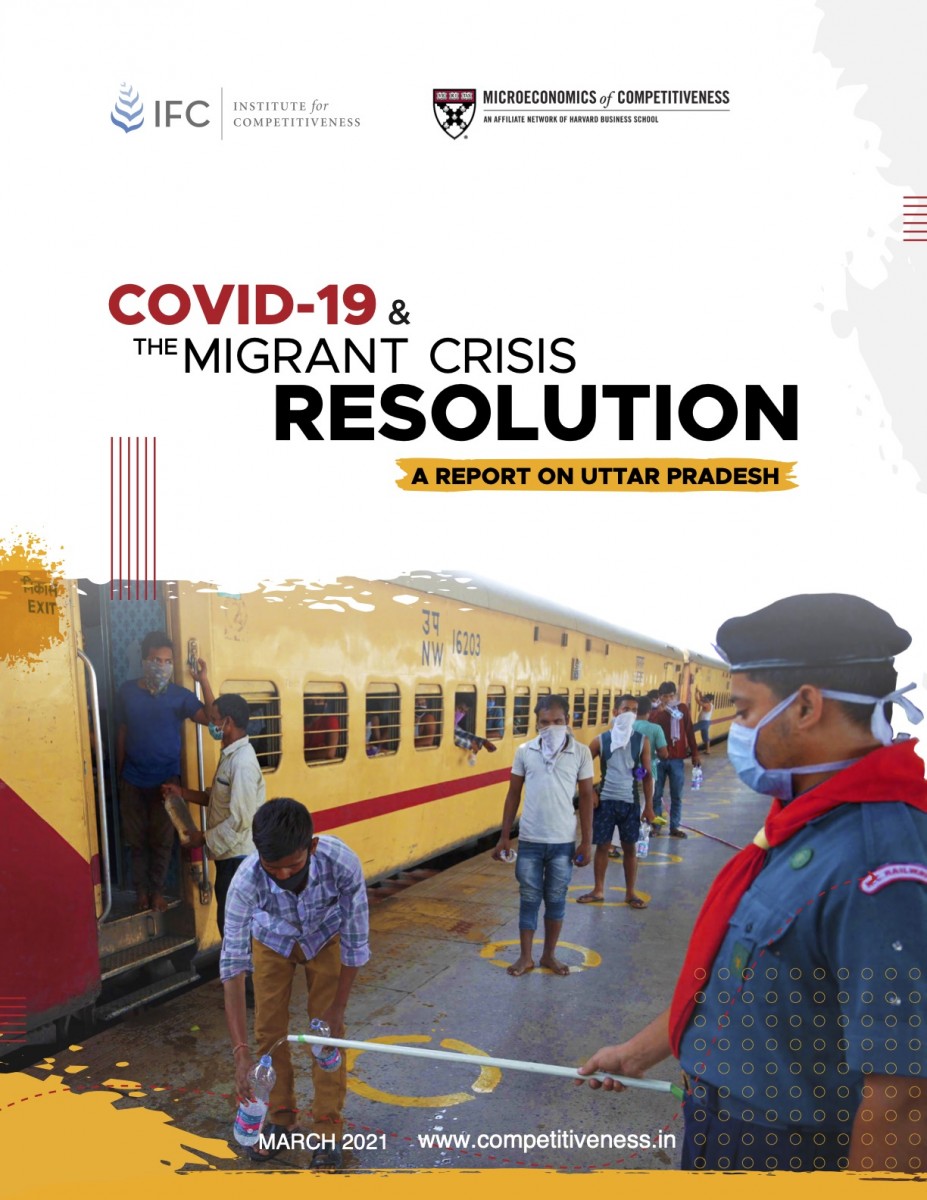 Cover of the Institute for Competitiveness report on Uttar Pradesh.

Titled, ‘Covid-19 & the Migrant Crisis Resolution: A Report on Uttar Pradesh’, the report’s  authors are Amit Kapoor and Manisha Kapoor. Amit Kapoor is ‘honorary chairman’ of the IFC and ‘editor-in-chief’ of a magazine called ‘Thinkers’, while Manisha Kapoor is a ‘senior researcher’ at the institute. Neither author appears to have done any scholarly work on Uttar Pradesh before.

The report does not have a section for references or a bibliography with details of the journal papers, data sources and/or newspaper articles referred to for the research. It only lists the UP government, a COVID-19 data tracker and (unidentified) migration studies by scholar Chinmay Tumbe as its main data sources. There are also 12 footnotes, many of which are media reports of official UP government announcements.

A footnote on the first page acknowledges all those who helped the authors in the process of the ‘study’. Apart from financial support from the Gates Foundation, the authors openly acknowledge the central role the Uttar Pradesh government itself played in guiding the study “from conceptualisation to completion”. “Insightful feedback” was offered by Mr. Sanjay Goyal (Secretary, Disaster Management, U.P. Government).

Acknowledgments listed on the first page of the UP report.

K.V. Raju, who is economic adviser to UP chief minister, has been thanked for ‘guiding from conceptualisation to completion, besides making suggestions on the earlier drafts’. Awanish Awasthi, who is additional chief secretary, has been credited with “enabling and coordinating this entire process with different departments”. Awasthi is known to be close to chief minister Yogi Adityanath and has been referred to as his ‘right hand man’ and as the ‘mini CM’.

The ‘study’ itself essentially consists of a summation of official claims about how the state government acted, all taken at face value – without actually assessing what the impact of its policies actually were on the ground. There are no interviews with migrant workers, academics, volunteers. Reports in the media that highlighted problems with the state’s handling of the migrant issue do not figure at all.

Apart from the fear that its ‘Harvard’ claim would be exposed, the UP chief minister’s office might have decided against circulating what is evidently an ‘authorised’ study because the text does not actually shower a lot of praise on the UP government.

“Contrary to media reports, our study doesn’t conclude the UP government handled the migrant crisis more effectively than other states. The document is not a comparative statement on the handling of the crisis by different states. It is documentation pertaining to the effort of the Uttar Pradesh government and extracting insights from the same,” Amit Kapoor told AltNews.

But some of the details in the study and the conclusions drawn are quite dubious nevertheless. For instance, it credits the UP government for arranging transport for migrant workers who wanted to return to the state at the time the lockdown was announced and then later when it was extended. The facts on the ground are rather more complex.

What the report ignores

While the UP government did arrange public transport in some parts of the state in certain periods during the migrant crisis, its performance was quite chequered. The ‘study’ overlooked the fact that the UP government at one point had even denied entry to migrants coming in from other states who had been able to arrange buses. Some migrant workers were sprayed with chemicals to ‘sanitise’ them.

When the Congress party tried to arrange buses for migrant workers who had been stranded and wanted to return to UP from other states, the UP government denied it permission and did not arrange transport on its own.

The Wire also documented the plight of workers in western UP who were walking to their homes from Delhi, Noida and Ghaziabad when public transport of the UP government was totally absent.

Next, the ‘study’ said that the UP government set up 503 hospitals for COVID-19, again without citing the source for this information. Given that UP’s population is 204 million, this implies that – if this information is true – 4 lakh people in the state are dependent on one hospital. As we see now with the COVID-19 situation unravelling in UP, the government was anything but prepared.

While there were several reports of migrant workers suffering due to non-provision of ration, none of this is mentioned in the study. At least seven people died due to starvation in UP during the COVID-19 period as per a database maintained by scholars Kanika Sharma, Aman, Thejesh GN and Krushna.

The Wire had also documented the plight of several migrant workers from Jharkhand who were stranded near Meerut with help coming only from good samaritans and not from the government. In fact, most of the community kitchens at the time had been set up by individuals and NGOs and not by governments in the country.

The ‘study’ credits the government for setting up screening centres and quarantine facilities but forgot to mention that the state of the facilities was such that some migrants died by suicide. At least one worker died in UP while conducting fogging activities using chemicals supplied by the government. A five year old from a Dalit family died in Agra in August after going without food because the family didn’t have employment and no ration card to access subsidised food.

In fact, the most non-virus deaths during the COVID-19 period have occurred in Uttar Pradesh according to the database. Of the 991 people who died in the country, 207, or more than 20% died in Uttar Pradesh. Several migrant workers died while on their way back home due to accidents and exhaustion.

The ‘study’ too, in a rather feeble manner, points out that the UP government needs to do more. “Although the Uttar Pradesh government has taken steps to build economic opportunities for them closer to home using existing schemes as well as by signing new MoUs, it is important to develop a long-term employment generation plan. The plan should be based on existing strengths of the state as well as the skill set of the labour force,” it concludes.

Wrong to use ‘Harvard’ tag

Though the Institute for Competitiveness claims to be “the Indian knot in the global network of the Institute for Strategy and Competitiveness (ISC) at Harvard Business School”, both the IFC and ISC told AltNews that it is incorrect to refer to the UP report as a ‘Harvard’ study. The IFC also said that the Harvard logo should not have been used on the cover and will be removed.

While the Adityanath government can hardly be blamed for doing its best to oversell the IFC report, the ease with which the government has been able to plant false and misleading information in some of the country’s leading news outlets is a cause for alarm. Despite ample evidence in the public domain about the falseness of the ‘Harvard’ claim, none of the media platforms which fell for this official deception have so far moved to issue clarifications to their readers.