Watch | Disengagement in Ladakh Not a Resolution, But Significant First Step: Jayadeva Ranade

Jayadeva Ranade is president, Centre for China Analysis and Strategy, and former Additional Secretary (RAW) in the Cabinet Secretariat. He speaks to Karan Thapar on the difficult situation at the border in Ladakh. 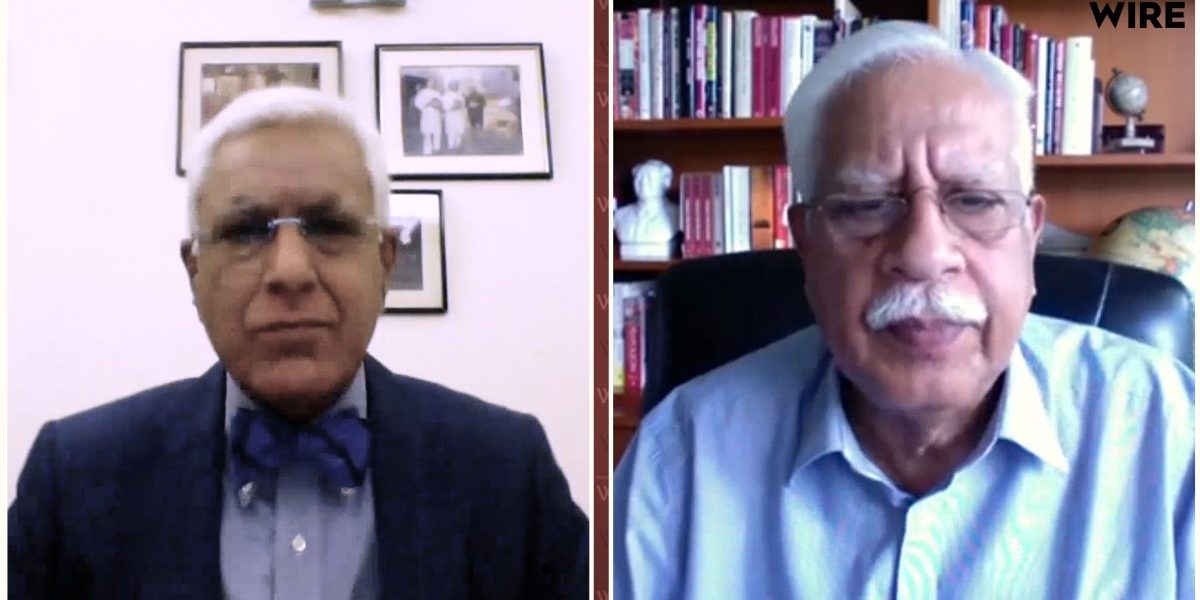 One of India’s best informed China experts says the disengagement currently taking place at Galwan, Hot Springs and Gogra in Ladakh is “a significant first step to defer imminent hostilities”. Jayadeva Ranade, the President of the Centre for China Analysis and Strategy and a former Additional Secretary (RAW) in the Cabinet Secretariat, says “the disengagement is tactical”. It is “not a resolution”.

However, Ranade adds, if the situation is not skilfully handled it can still turn “to hostility and conflict”.

In a 40-minute interview to Karan Thapar for The Wire, Ranade said the buffer zones, which are said to be up to 4 kms, are designed to avoid physical contact between soldiers but, he added, the one at Galwan “does sound disadvantageous to us”.

According to the Business Standard, the Galwan buffer zone is “entirely in Indian territory”.

Questioned about two further points made by the Business Standard on July 9: first, the marker for the Line of Actual Control at Galwan has moved from PP-14 to Y-Nallah and as a result the LAC has moved one kilometre into Indian territory and, second, that Indian troops are now 2.4 kms away from India’s perception of the LAC compared to just 400 metres in the Chinese case, Ranade said this “sounds disadvantageous to us”.

However, he added that it was possible that Lt. Gen. Harinder Singh, XIV Corps Commander, who he described as an “educated and thinking General”, could have agreed on the location of the forward post at a 2.4 km distance from India’s perception of the LAC after taking into account the topography which, Ranade said, gives an advantage to India.


Speaking about assertions in the statement put out by the Chinese after the Doval-Wang Yi talks, claiming Chinese sovereignty over the entire Galwan Valley, Ranade said this was “a disturbing paragraph”. He suggested that its significance was underlined by the fact that it was a preamble before any further points made in that statement.

Speaking about disengagement at Pangong Lake, which has not yet been agreed to, and the belief that this could be the most difficult to negotiate, Ranade said it will need “protracted negotiation” and the outcome “depends on our resolve”. He also said de-escalation, which is expected to follow disengagement, “will take a long time”.

Ranade also said the potential for hostility and conflict remains if the situation is not skilfully handled. However, when he was asked for his assessment of how the Indian army would stand up in a conflict with the Chinese military, given that China is a five times bigger economy and its army has been considerably better funded, Ranade gave a riveting analysis of some of the challenges facing the Chinese army, which may not be fully understood in India.

First, he said China is calculating on a short battle using overwhelming power, thus enabling it to declare victory, but “they won’t get that”. He said any conflict “will be protracted and bloody”.

Then, Ranade analysed some of the problems the Chinese army would face in such a protracted battle. To begin with, China has not fought a war since 1979. More importantly, their soldiers are paid higher allowances for being stationed in Tibet which, he said, clearly indicates a problem. Moreover, Chinese troops, he said, are a mixed lot. Many are students who want to go back to university. Therefore, he asked, are they better soldiers? That, he said, is “debatable”.

Consequently, he said, “On balance a conflict won’t be easy for China”. He said it would be “a tough fight with no winner or loser. It would be very bloody”.

Ranade added that a conflict that ends without winners and losers would be “a clear setback for President Xi”. Ranade said Xi is the moderniser of the PLA. He’s taken on the responsibility “of getting it battle ready”. His aim is to prepare it “to fight and win”. So a battle that ends without victory for China is going to “dent his image”. A no-winner no-loser outcome would be “a defeat for China”.

Speaking in part two of the interview (i.e. after the commercial break) about whether India has misread or misunderstood China and thus got into this crisis, Ranade told The Wire, “China’s negative attitude to India has been building for a couple of years…since Doklam China has been looking at India in military terms”.

He said, “The concerned quarters (in India) were clear the relationship was not what it should be”. However, he added, that they may not have taken into consideration the possibility of “military adventurism”. As he put it, they probably “did not anticipate massive pressure right along 1,100 kms of the LAC in Ladakh”. At one point in the interview Ranade accepted that this could be “a lapse”.