Wanted: A One-Stop Source for All COVID-19 Case Data in India

The two 'official' websites, those of the ICMR and the health ministry, don't do a great job and are clearly not in sync.. Nearly 17 states and union territories also do a poor job of disseminating information. 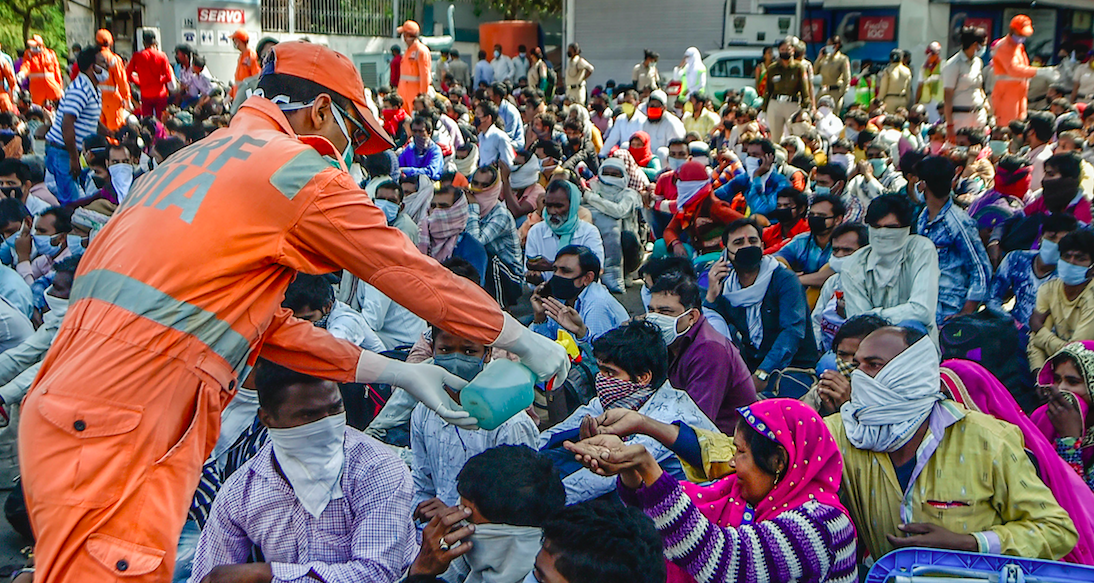 The Kerala government traced and tracked the contacts of all these three persons and prevented local transmission. But from March 2 onward, new cases popped up in a number of states and it has steadily grown since then.

COVID-19 infections have now been reported from 27 states and Union Territories out of the country’s 37 states and UTs. On March 12, India reported its first death arising from the novel coronavirus — a 76-year-old man from Karnataka. That same day, the Union health ministry announced drastic travel restrictions, preventing foreigners from entering the country and suspending all visas, barring a few categories, till April 15.

Prime Minister Narendra Modi finally decided to order a nationwide lockdown for 21 days from March 25, which he announced through a speech at 8 pm on March 24. The rationale given behind the lockdown was to prevent community transmission of COVID-19 from happening. Nevertheless, in the last few days, all-India infection numbers are rapidly approaching the red-line of a 1,000 positive cases, with the virus taking 19 lives.

As of March 12, testing was limited to 52 government centres. Since then, a number of experts have raised concerns about the restricted testing strategy and have questioned the criteria approved by the Indian Council of Medical Research (ICMR). It was pointed out that this is insufficient considering the nature of this virus and called for more testing.

Four days later, on March 16, WHO head Tedros Adhanom Ghebreyesus urged that there has not been an urgent enough escalation in testing, isolation and contact tracing, which should be the “backbone” of the global response. He said it is not possible to “fight a fire blindfolded”, and social distancing measures and hand-washing will not alone extinguish the epidemic.

Ramanan Laxminarayan, director of the Washington-based Center for Disease Dynamics, Economics and Policy, also stressed that India needs to sharply ramp up its testing, during an interview with Karan Thapar on March 19.

On March 19, the 10 am bulletin issued by ICMR noted that 13,316 samples from 12,426 individuals have been tested so far and it was found that 168 individuals were tested positive with COVID-19. This translated to just 9.4 persons per million of population (ppm). This graph from below shows how the other nations are conducting tests and that we are testing very low in comparison. 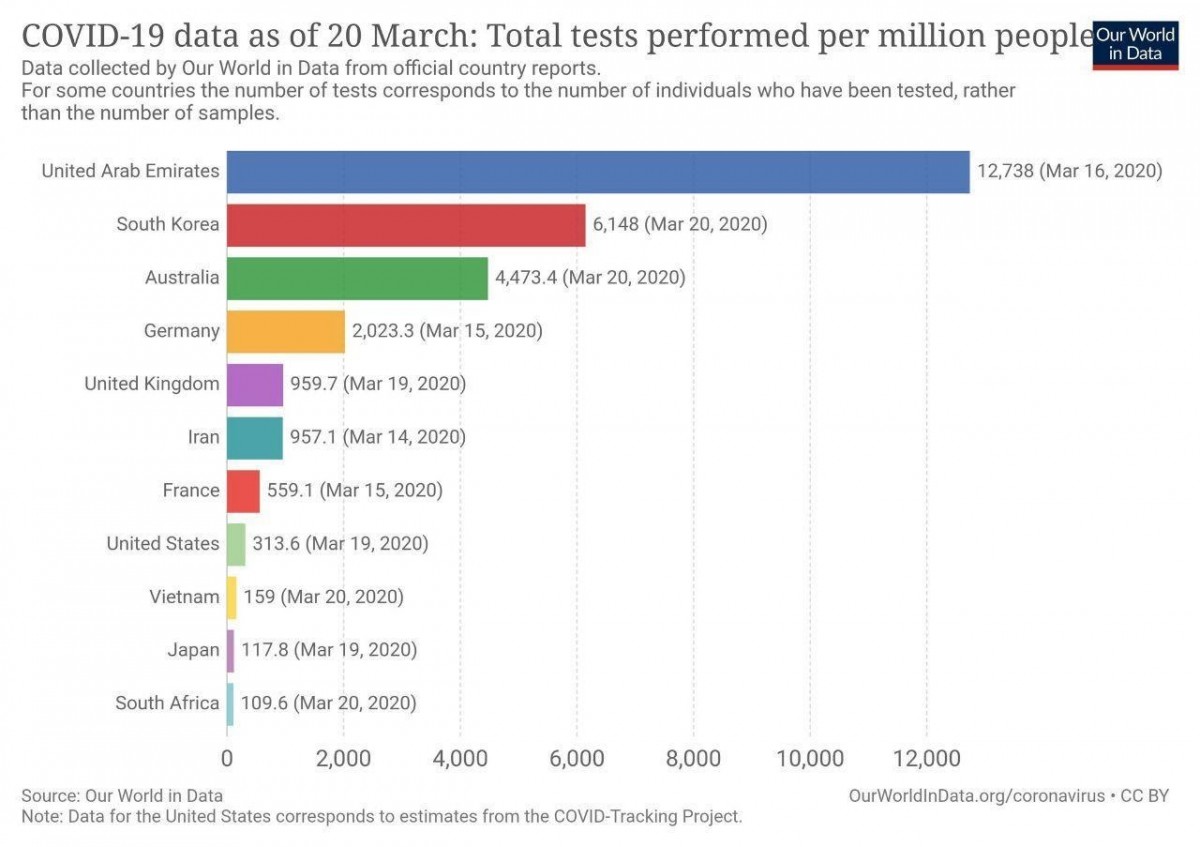 As per the information provided in the ICMR website on March 27, there are now 111 government laboratories that are operational and 44 private laboratories in the private sector that have been given permission to test for COVID-19.

As per the bulletin dated March 27, India has so far tested 27,688 samples from 26,798 individuals and found that 691 of individuals are tested positive. That means we enhanced testing to a level of 2,326 persons a day in the last four days. Hence the number of people tested has increased from 9.4 ppm to 20.2 ppm as of March 27, but this is still low compared with the testing done by the other nations.

Meanwhile it  soon became apparent that the data of positive cases provided by the ICMR and the Ministry of Health and Family Welfare (MoHFW) did not quite match even when then they issued updates at the same time. Also, neither websites provide the archives of the data. Nor do they provide bulletins. The MoHFW’s website looks rudimentary and there is much delay in updating the information there. In most cases, the MoHFW website does not reflect the updates given by various state governments even hours after the data is provided.

Meanwhile the ICMR website, which used to issue two bulletins daily, did not update data after 8 pm on March 25 till March 28 evening. They updated the data pertaining to March 27 through a 9 am bulletin and now even that has disappeared from their website.

While the IMCR provides all-India figures, there is no state-wise break up available to understand how individual state governments are performing with regard to testing. The information management and dissemination by the health ministry and broader government is really disheartening. Here is a government which boasts of a “Digital India,” and is committed to trying to gather as much data as it can from its citizens, but in return does not reciprocate by creating an equal outflow of essential and up-to-date data.

It is also disappointing to see that the MoHFW cannot put together a decent website with all information that consists of historical daily data nationwide and statewide, including the number of tests done. Why can’t we have a baseline reporting time and data consistency?

All over the world, many government websites provide a veritable reservoir of information. Even a voluntary website run by some enthusiastic youngsters is more information-rich than the MoHFW’s website.

State governments and UTs are not much better. This author examined various websites and bulletins issued by states and UTs to understand how they are performing with regard to testing.

While some state government websites do provide detailed information and useful bulletins, others neither give any information nor have updated their websites for weeks. Uttar Pradesh and Goa for instance haven’t updated their websites for weeks. The UP government’s Twitter handle however provides bulletins regularly, but this makes it difficult for third-parties to compile and asses the data.

The governments of Delhi and Telangana finally updated their website today (March 29) after asking multiple people asked them to do so.

No information is forthcoming from the Madhya Pradesh, Bihar, Himachal Pradesh and Uttarakhand government websites. Out of the total 37 states and UTs, a detailed information flow is available from only 20 of them, which corresponds to 82.6% of our population. Interestingly 21,693 people out of the 26,798 people tested by ICMR belong to these states. No information is in the public domain from the rest of the 17 states and UTs, which make up 17.4% of India’s projected population (population projection given by Census department for 2020 is used here).

Let’s take a look now to see how many tests are done by these 20 states and UTs and understand how many people have been tested.

It can be seen that Kerala top the lists with more number of samples tested and it tests 150 ppm, more than 7.5 times the national average. Delhi, with 57 ppm, is at second place. Telangana, Karnataka and Rajasthan tests 44, 44 and 40 ppm respectively. While large States like Uttar Pradesh, West Bengal, Andhra Pradesh and Odisha tests very poorly. No information is available in the public domain about big states like Bihar and Madhya Pradesh.

Now look at this table and also at the chart given below:

This indicates that we have to do more tests to determine the scale of infections, which in turn will give us a sense of the community spread.

The above analysis makes the case for more expansive testing. It is also necessary that there should be a single point for streamlined and consistent information. One hopes that the MoHFW will step up to the task.