His killing, along with the 'encounter' of four suspects in the Hyderabad gangrape case, shows that the modern Indian state has broken away from the claim to upholding the rule of law. In both cases, after much media glare, the police seemed to send out a message that the rule of law was passé. Most observers saw the police accounts of the encounters as not credible.

One may say that encounter killings and custodial deaths have always been a reality, and these are part of a fundamental problem with policing in India. Some also argue – strangely enough – that the slow pace of justice delivery somehow legitimises such acts.

Break with the past

However, there are palpable signs of a break with the past. And these hinge on the central principle on which the modern state stands: legitimacy.

To summarise my core argument, while governments till a few years back sought to guard their reputation in high-profile cases under the media glare – fearing that people would see them as high-handed otherwise – the latest pattern is to brazen it out and show citizens that the hard state does not care for the rule of law.

Let me explain the shift from a historical perspective. Unlike pre-modern states, which sought legitimacy from religion, modern states in the world have drawn legitimacy in the name of the people.

As thinkers like Antonio Gramsci and Louis Althusser have said, the modern state has not just a coercive but also an ideological, or hegemonic, apparatus that seeks to convince people of the essential goodness of the state.

This was to an extent true even of British Rule, as the colonisers claimed to be a “civilising” presence in India.

The modern state has always claimed to uphold the rule of law as a break with the arbitrary manner in which pre-modern monarchs functioned. It is believed that the state will protect the rights of all and that any curtailment of life and liberty for offences committed would be as per laws and procedures.

The modern state has always claimed to uphold the rule of law as a break with the arbitrary manner in which pre-modern monarchs functioned. Photo: Pixabay

It isn’t that this normative promise has always been fulfilled. There have been umpteen instances of the coercive power of the state being used to harass the vulnerable on the ground.

However, what defines the modern state is its attempt to be seen as procedurally fair when a crime catches public attention. For, here, the legitimacy of the state in the eyes of the people – its fair play and justice – is put to test.

This was true even of the exploitative colonial state in India, but not so in the Dubey encounter killing case or the Telangana gangrape case.

When an anti-colonial activist captured the imagination of the people, the colonial state tried to appear procedurally fair. The legendary freedom fighter Bhagat Singh was put to trial after his arrest and then executed. Even the Indian National Army war veterans were put to trial at the Red Fort.

Post-independence, Nathuram Godse was given a fair trial in the Mahatma Gandhi assassination case and not killed immediately after his arrest.

India saw two prime ministers – Indira Gandhi and Rajiv Gandhi – being assassinated. In the former case, Mrs Gandhi’s killers Satwant Singh and Kehar Singh underwent a trial before being executed five years after the assassination. The Rajiv Gandhi assassination case of 1991 has dragged on endlessly.

The infamous criminals Ranga (Kuldeep Singh) and Billa (Jasbir Singh) were also tried and sentenced to death, in 1982, for the sadistic torture and killing of Geeta and Sanjay Chopra, the teenaged children of a senior naval officer, in 1978.

In this sense, criminal justice in high-profile cases – which were public knowledge – marked a continuity from colonial to independent India.

One notable exception was the death of dacoit Sunder in police custody during the Emergency. It was suspected that he was killed by the police on a deserted bridge. Soon enough, however, there was a CBI probe and many officers of the Delhi Police – including DIG P.S. Bhinder – were arrested.

In cases that do not become public knowledge, it is known that police have often been high-handed. There have been “encounter specialists” like Rajbir Singh and Daya Nayak who were often accused of fake encounters. However, these cases got reported after the killing. 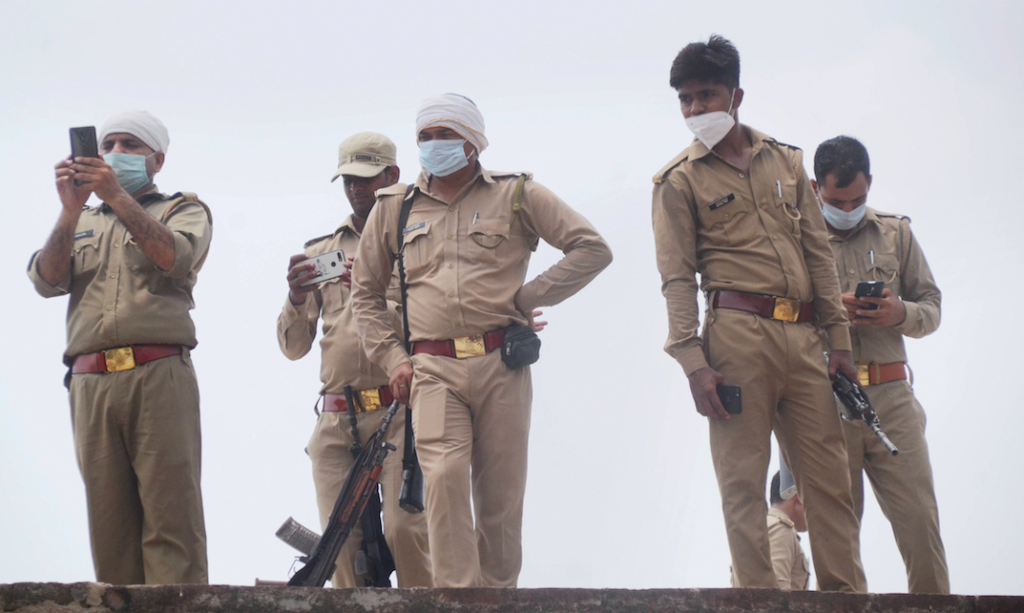 The rise of the mass media about 20-25 years ago led to a major change. It redefined what was “high-profile”. The very nature of television – where editors followed other channels and immediately alerted their reporters about what a rival channel was running – led to a change in the meaning of prominence.

A prominent event alone was no longer news.

An unknown child falling in a well could become a big story if most channels followed it. Anna Hazare, a Maharashtra activist not even known in Delhi, suddenly swept the city as if he were another Gandhi because many channels projected him as such.

In the realm of crime too, the meaning of “high-profile” began to change, with the state taking cues from the media as to which “news” it had to manage properly.

The A.B. Vajpayee government and the Manmohan Singh government sought to adjust to the mediatised meaning of high-profile news, often acting in panic to save their reputation.

In Vajpayee’s time, BJP president Bangaru Laxman lost his job after a news story accused him of accepting “bribes”. Manmohan Singh as prime minister bore the full brunt of the Anna movement and parliament was convened to discuss the Lokpal demand of the obscure activist.

The Delhi gangrape case of 2012 was unprecedented. As crowds choked key locations of the capital, the accused were promptly put on trial and even rape laws were changed.

The state was, thus, now seeking to guard its reputation by responding to the news cycle and trying to be seen as fair. However, the UPA government failed to convince people and was voted out of power.

The only context where the state could appear to be brazen even under media glare was in troubled zones like Kashmir, as citizens outside these zones have seen them as a “problem” for the nation.

The last six years have seen a gradual shift in how the legitimacy of the state is constituted. Ironically, a modern state is pushing the idea that institutional niceties are lazy and prone to misuse, and seeking to connect directly with the people in ways that undermine institutions. This is often done through the discourse of a strong leader with a direct connect with the masses, with intermediate institutional structures losing their legitimacy. This, in other words, is the discourse of the “hero” and “saviour”.

The reason for the shift may be a populist mood generated in the past few years that blamed an elite that dominated democratic institutions for the aspirations of the masses not being fulfilled.

The Telangana encounter – an instance where the police seemed to understand that people were seeing the legal system not as an aid but as an impediment to justice – saw the gangrape accused being shot in a manner that made most suspect that it was a staged encounter. They were already in police custody and were taken to the scene of the crime and shot dead when they allegedly tried to snatch the weapons of the police. The next day, TV channels celebrated the extra-judicial killing as justice and showed people celebrating it. This was something very different from what had been seen after the Nirbhaya gangrape case. 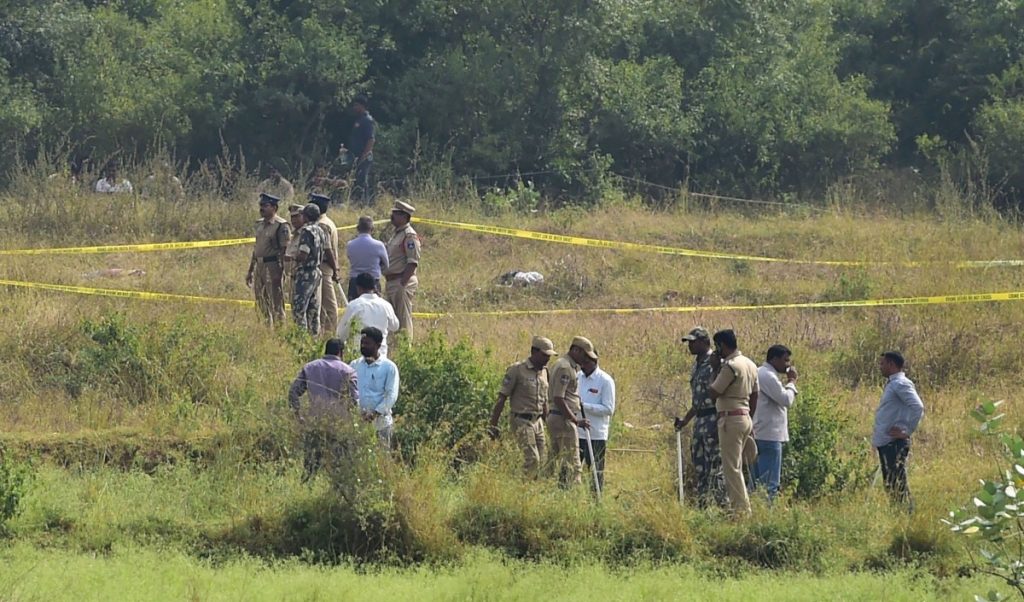 Telangana Police at the scene of the encounter where four gangrape accused were killed. Photo: PTI

The encounter of Vikas Dubey – who had gunned down eight policemen – is seen by many as even more brazen. As a hardened criminal, Dubey needed to be put to trial to find out who his patrons in the system were. After all, he had been thriving as a gangster despite murdering UP minister Santosh Shukla in the broad daylight in a police station.

Also Read: The Real Story is Not Vikas Dubey’s ‘Encounter’ but the Chapters His Killing Has Closed

Anticipating an encounter, Dubey escaped and was arrested at the Mahakal temple in Ujjain. The public ‘surrender’ before the media, he perhaps thought, would keep him safe and he would have to undergo a trial. However, once he was handed over to the UP police, he was killed in a dramatically ‘encounter’, stopping media vehicles just at a distance where the encounter became possible. The police claimed that he tried to snatch a gun and fire at them. Most believe that the police could have captured him alive, as he was alone and unarmed.

There are signs state authorities are no longer appealing to people on the basis of a claim to institutional and procedural fairness, something that marked the modern state as different from others over a century.

Legitimacy is now increasingly being sought from people on the basis of state functionaries’ perceived ability to undermine institutions, which are being seen as impediments to justice.

In both these cases, the perception among a section of citizens is that the accused have been prevented from facing trial by the police in an attempt to ensure justice is neither delayed nor denied. This, indeed, is an inversion of the very promise of the modern state.

In the Lokpal debate, the Hazare camp had repeatedly claimed that the police subvert the process of law by deliberately filing a weak chargesheet in high-profile cases so that the courts reject it. The claim was that law was being undermined even while maintaining a facade of it.

That phase seems to be over. Now, it is the public celebration of the perceived pre-empting of a judicial process that is seen as justice. Here, the police are also seen by many citizens as the judge and executioner, albeit without a trial.

Vikas Pathak is a media academic who teaches at the Asian College of Journalism, Chennai. He has authored the 2018 book Contesting Nationalisms, brought out by Primus Books.