Reporters who were following the convoy in which the gangster was being ferried were not allowed to proceed minutes before he was killed. This has raised suspicions that the 'encounter' was staged. 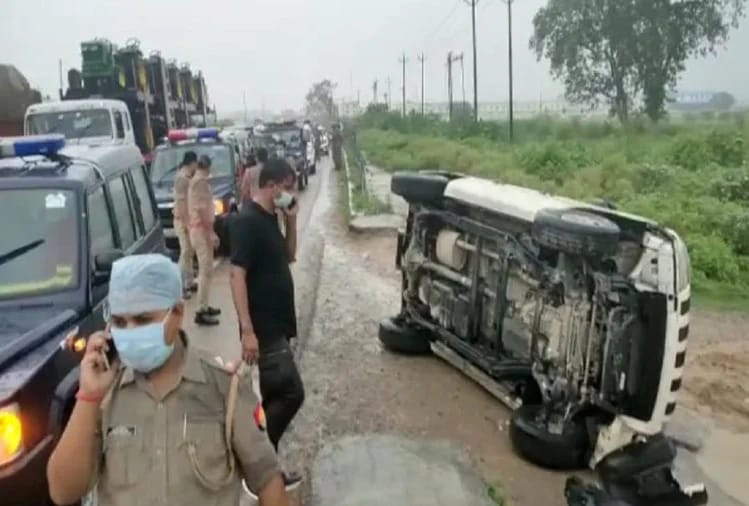 An overturned vehicle at the encounter site where gangster Vikas Dubey was killed on July 10, 2020. Photo: PTI

New Delhi: In what many are seeing as a foregone conclusion to a week-long saga, the Uttar Pradesh police on Friday morning declared that gangster Vikas Dubey had been killed in an encounter at around 7 am. The gangster, who had been arrested in Ujjain on Thursday, was in transit to Kanpur in a police convoy.

Soon after the news was confirmed, reporters who were following the convoy said that their vehicles were suddenly blocked by the police just before the alleged encounter occurred. This raised suspicion that the blockade was meant to help the police convoy ‘stage’ the encounter.

The police have told the media that a car in the convoy met with an accident and overturned. Dubey allegedly tried to snatch a pistol from an injured policeman. He was surrounded but refused to surrender and opened fire at the police. The gangster, who is wanted in the killing of eight policemen in Bikru village of Kanpur on July 3, was killed in ‘retaliatory’ firing, the police stated.

According to an Aaj Tak report, the convoy entered Kanpur at around 6:30 am. Here, the movement was heavily restricted and all private vehicles, including those of the media, were blocked. After the police checked the vehicle of the Aaj Tak team, they were allowed to proceed. They soon reached the spot where one vehicle of the police convoy ‘overturned’ and where Dubey allegedly snatched a pistol and fired at the police.

The Wire spoke to a reporter from a leading Hindi news channel, who confirmed that the vehicles were suddenly stopped by the police. The reporter, requesting anonymity, said, “My camera person and I were just inches behind the car in which Dubey was travelling. Suddenly, we were all stopped by the police and our cars were checked. The police out of the blue began asking for our identity cards and details of our media houses. There were about half a dozen media vehicles following the police movement since late last night.”

The reporter said that until that moment, the flow of traffic was smooth but suddenly the road was jammed. “Only the police vehicle in which Dubey was travelling was allowed to pass ahead. It was around 6.56 am then. A few minutes later, the Kanpur police confirmed he was killed in an encounter.
Dubey was not handcuffed. And was seated between two policemen,” the reporter told The Wire.

Pugnacious reporters, who were dilligently following the vehicle ferrying Vikas Dubey over a long road journey, ask questions of cops why their vehicles were stopped for “checking” in Kanpur🙂.

That happened 15 minutes before the gangster was killed in the encounter pic.twitter.com/1NBu5kRY37

On WhatsApp, reporters groups are also buzzing about some police officers manhandling media persons who were following the convoy. “At least 4-5 policemen, part of the police team that left for Kanpur carrying Vikas Dubey with them, attacked my team on the highway around 8 km before Pachore (in Madhya Pradesh),” one message from the reporter of a Hindi news channel claims.

Police reportedly stopped the car, held the driver by his collar, and hauled him out. They took the car keys and threw it away in a bush. When the cameraman fetched the key, another policeman snatched it away and then drove away, according to the reporter’s message.

The police’s version that Dubey snatched a pistol and was killed in retaliatory firing has also come under criticism. On Thursday morning, an associate of Dubey was also killed in an encounter. In that case too, t the police said the associate, who was in transit, tried to snatch a pistol and flee.

Because Dubey is a hardened criminal who has more than 60 cases registered against him, the police should have handcuffed him and secured their weapons, observers have noted.