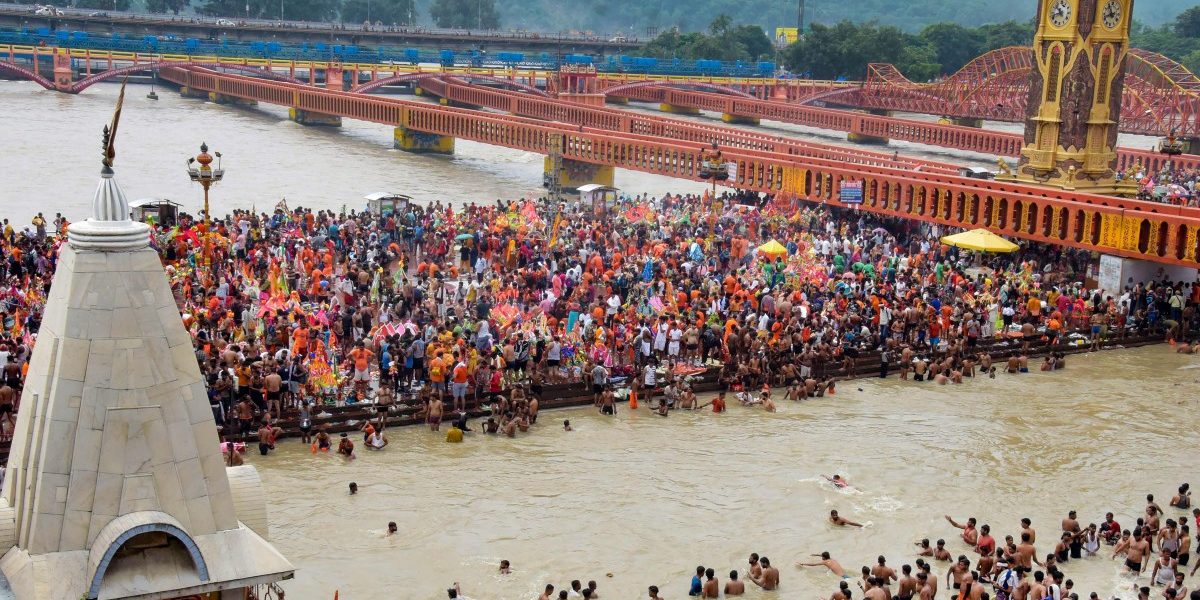 Devotees of Lord Shiva gather water from the Ganga during the Kanwar Yatra in Uttarakhand's Haridwar on July 21. Photo: PTI.

New Delhi: Uttarakhand minister for Women Empowerment and Child Development Rekha Arya recently passed an order directing all district officials and employees of her department, anganwadi and mini-anganwadi workers and assistants to perform ‘jalabhisheka’ (a water ritual) at Shiv temples near their homes on July 26, and to post photographs of the same on the official e-mail and WhatsApp groups.

Her order has created a stir in the state and has drawn objections from social media users as it makes it mandatory for government officials and workers to perform a religious task, and also publicise it.

Rekha Arya, WCD Minister in Uttarakhand, orders all anganwadi workers and other WCD staff to perform “jalabhishek” in the nearest Shiv shrine. Is this for real? Yes! pic.twitter.com/CHVZ5iudVh

Further, the minister’s order is said to be the first such official direction in a religious matter where the sentiments of women and members of various castes and sub-castes in the matter have been ignored.

In her order, Arya had stated that the task of ‘jalabhisheka’ be performed as part of the ‘Azaadi ka Amrit Mahotsava’ programme announced by Prime Minister Narendra Modi on March 12 last year, 75 weeks before India’s 75th Independence Day. The ruling Bharatiya Janata Party (BJP) has been projecting the occasion as being part of India’s socio-cultural identity.

Arya also stated that the Mahotsava was being celebrated under the ‘Beti Bachao, Beti Padhao’ programme, launched by the Union government in January, 2015.

She said a ‘Kanwar yatra‘ with the message, “Mujhay bhi janam lene do, Shiv kay mah main Shakti ka sankalp hai” (Let me be born, it is the resolution of Shakti in Shiv’s month) has been planned as part of this programme in which all government officials and workers under her ministry are required to participate.

He claimed that never before in the hill state has such a government order been issued by a minister.

“Lord Shiva is a symbol of Sanatan Dharma and is worshipped as per its traditions. So for the minister to direct Anganwadi workers to not only pour water on the Shiv linga but also to post photographs of their doing so, was blatantly wrong,” Mahara said.

Explaining the rationale behind his believing so, Mahara said, “Women who follow Hindu or Sanatan traditions believe in certain principles when it comes to worshipping Lord Shiva, or when they want to visit temples or perform ‘jalabhisheka’.”

So, he contended that the minister’s assertion that they perform the ritual and also post photographs was akin to a ‘Tughlaqi farmaan’ (dictatorial direction).

Mahara said the minister could have requested workers to do as she desired, but for her to issue government order in the matter was absolutely wrong. “Issuing a government order for performing a religious ritual definitely amounts to setting up of a wrong precedent, which should not have happened,” he said.

The Congress leader said, “The minister should also realise that there are several castes and sub-castes within Hindu society in which women are not allowed to perform ‘jalabhisheka’ and so, to make it mandatory for Anganwadi workers was avoidable.”

“She should refrain from seeking cheap publicity,” he added.

Anganwadi workers’ organisation calls for boycott of the order

Meanwhile, the All India Federation for Anganwadi Workers and Helpers (AIFAWH) issued a press statement demanding the immediate withdrawal of Arya’s order, calling it a “shocking violation of the constitution of India and its secular fabric.”

Further, highlighting that the present order is being pushed under the banner of the ‘Beti Bachao, Beti Padhao’ scheme, the AIFAWH statement demanded that wages and funds for supplementary nutrition, pending since February, be payed “to save the betis”.

“It is ironical that in Uttarakhand, the payment of wages of anganwadi workers and helpers and the funds for the supplementary nutrition is pending since February, 2022. The Uttrakhand Anganwadi Sevika Sahayika Sangh (CITU), affiliated to AIFAWH, has been on struggle demanding the payment of arrears. We demand the immediate disbursement of all arrears,” the statement said.

The statement also criticised the government for conflating religion and official business, noting that anganwadi workers and helpers come from a variety of religious backgrounds and have varied belief systems.