In Several UP Villages, Toilets Exist Only on Paper

The government claims 99% of Uttar Pradesh is open defecation free, but the ground reality shows this assertion is far from the truth. 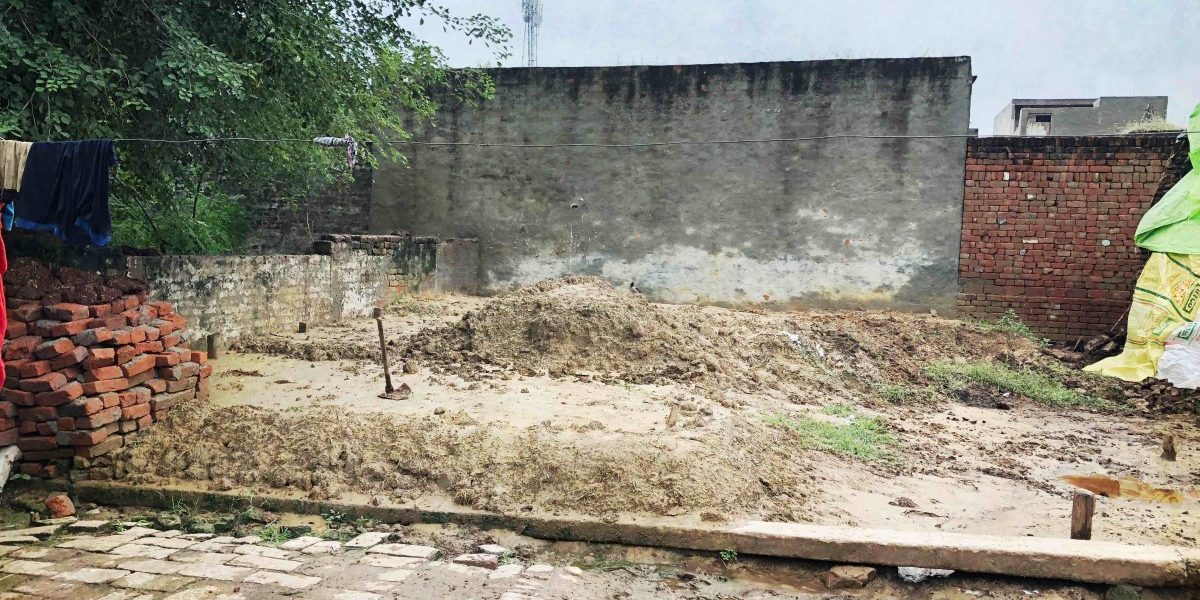 A toilet existed here but came crashing down in the rains. Credit: Kabir Agarwal

Note: This is part three of a series on Modi government’s Swachh Bharat Mission. Read part one and two.

Lucknow/Barabanki/Meerut/Shamli: Hetampur is a small village of about 1,200 people in central Uttar Pradesh’s Barabanki district, located 50 kilometres from the state capital Lucknow. The village has been declared open defecation free (ODF) under the Swachh Bharat Mission (Gramin).

Urmila is a resident of the village. She is 60, short and skinny. Sitting outside her one-room house of brick walls and earthen floor, she is peeling potatoes for dinner for a family of five – her husband, son, his wife and their three-year-old daughter.

Does the family have a toilet? “What toilet? We didn’t get anything,” she quipped, and added that she has bigger concerns. “We don’t have a gas cylinder. We don’t have a ration card. We have to watch over our field 24 hours because of the menace of stray cattle.”

Urmila argues that building a toilet figures very low on her list of priorities. “Khet mein jaate hain subah-subah. Kya dikkat hai? Ration nahi milta, cylinder nahi hai. Wo dikkat hai (We go in the fields early morning. What is the problem? We don’t get ration, we don’t have a cylinder. Those are problems).”

Across the street from Urmila’s house lives Mohammed Ismail with his family of five. He too does not have a toilet in his house and everyone in the family defecates in the open. “We have contacted the pradhan many times. But nothing has happened,” Ismail said.

The family would like to have a toilet that it can use and not have to defecate in the open. “It is a major problem for women to go out in the open. It is demeaning and there is also the issue of safety,” said Quresha Bano, Ismail’s wife.

Late last month, The Wire visited about 50 households of the 200 in the village and found toilets only in ten. Some toilets remained incomplete. The households that had access to finished toilets claimed to be using them.

According to the Swachh Bharat’s (Gramin) database, the village has been verified open defecation free. The verification process, as The Wire has reported earlier, is not independent. The SBM guidelines suggest that independent third-party verifications or cross-district verifications be carried out. However, the guidelines have not been followed and teams from the district office are carrying out verifications in their own districts. There are cases where no verification has taken place whatsoever.

Recently, when a Quality Council of India (QCI) team conducted a random survey, they found that in Barabanki, construction of toilets had not even begun in most villages that they visited. In Lucknow district, the QCI found that of the 12 villages that had been surveyed, six had over-reported the number of toilets built by over 50%. In Sultanpur, in the seven villages the QCI team visited, not a single toilet was found to be complete.

Meerut and Shamli districts in western Uttar Pradesh had been declared open defecation free in 2017. When we visited eight villages in these districts we found that a majority of households did not have access to toilets. In some villages, the toilets that the government claimed had been constructed were never built.

“Look at the condition of this toilet. The floor is earthen. How can we squat here?”

In Naglamal, for instance, a majority of households claimed that toilets were never constructed. Sandeep Tomar, a farmer with four acres of land, claimed that while some people in the village got toilets built, his family was deprived of the same. “Our name was there on the list. But the toilet was never built,” he said.

Kuldeep Tomar, another resident of Naglamal claims that a majority of households in the village still do not have access to a toilet. “Some people have built toilets. But more than 50% of households still don’t have toilets.” 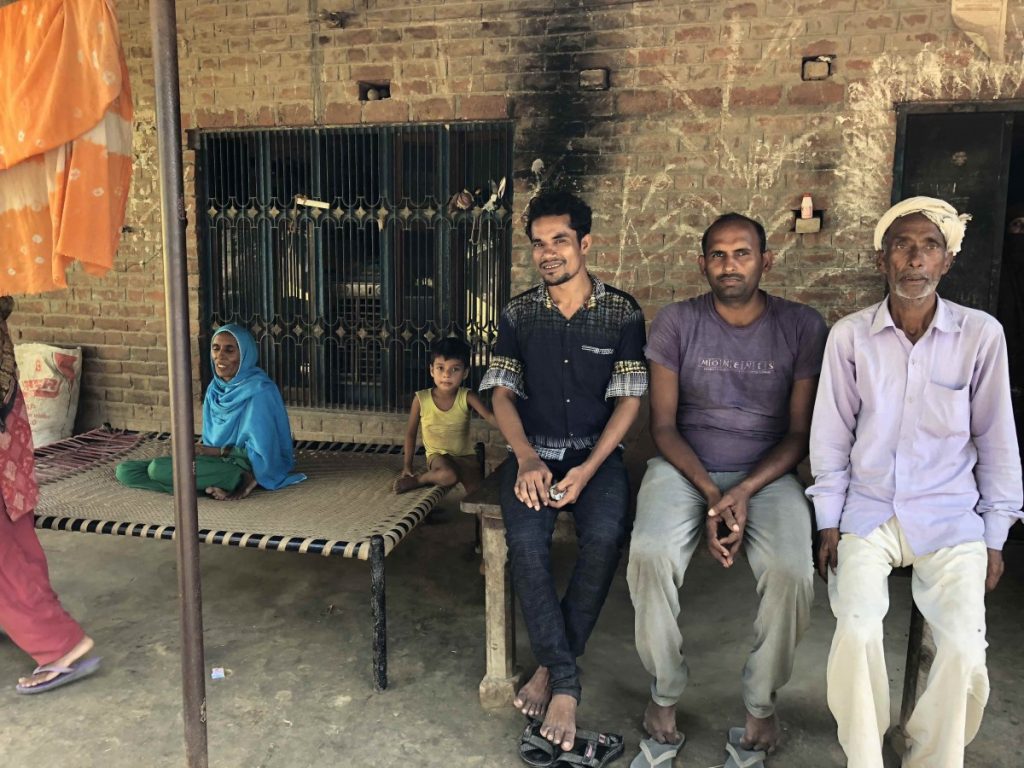 Mohammed Ismail with his family in Hetampur, Barabanki. The family does not have a toilet.

‘How can we squat here?’

In Pabla, a village in Meerut district’s Rajpura block, a large proportion of the 800 households too claimed that toilets were never built. And that the toilets that have been built, as we witnessed, are of sub-standard quality. The families are not using them. They continue to defecate in the open.

“Look at the condition of this toilet. The floor is earthen. How can we squat here?” said Monica who is now using her toilet to store grains.

Sunita, Monica’s neighbour, explained that her toilet cannot be used as there are cracks in the roof, in addition to the floor being earthen. She has now stored bricks in the toilet. Some are using toilets to store dung cakes of their bovines.

For almost all toilets built in Pabla, the floors were earthen. The roofs were poorly constructed with gaps in the middle. The doors to many of the toilets had fallen off. The walls had also started caving in. 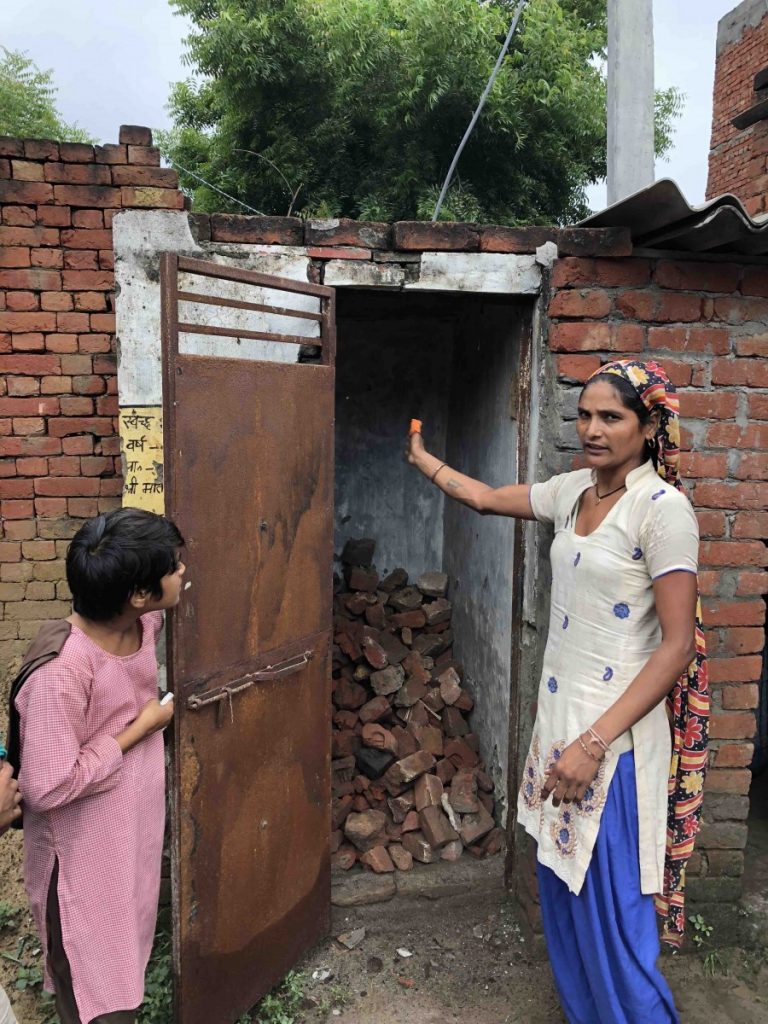 Sunita stores bricks in her toilet.

Some households even claimed that the toilets collapsed entirely in the monsoon rain. When I asked Sheela, a resident, where her toilet was. “Here it is,” she responded pointing to a heap of bricks in her courtyard. The toilet, she claimed, came crashing down a few months ago when the monsoon arrived. “We were lucky that no one was inside when that happened,” she said.

“Of the 300 that were built, at least 100 toilets have collapsed entirely. Another 200 are so poorly constructed that they cannot be used,” said Anil Singh, former pradhan of Pabla.

“The pradhan has pocketed all the money,” Singh added.

Under the SBM (Gramin), Rs 12,000 is provided as an incentive for each household to build a toilet. However, the methodology of when and how the money is transferred, as per the SBM guidelines, remains a matter of discretion for states. In Uttar Pradesh, I found that several different methods are being used. In some cases, the money is transferred from the district office to the pradhan who is supposed to distribute it among beneficiaries in the village when he deems fit.

In others, the money is transferred to the beneficiaries when the district office receives a list from the pradhan claiming that each household in the village has built a toilet. Only in rare cases, the money is transferred to beneficiaries when the district office physically verifies that toilets have been built, as the SBM guidelines suggest.

In Pabla, the money was transferred to the pradhan, who employed a contractor to build the toilets, and did not transfer any money to the accounts of beneficiaries, claimed residents. “No one in the village got any money,” said Singh.

Also read: How Is Modi’s Swachh Bharat Dealing With the Public Health Crisis of Open Defecation?

When we met the pradhan of Pabla, Kalu Ram, he denied any wrongdoing. “These people do not want to use toilets. They want to go out in the open. They are making excuses. We have built toilets. The money for most of the households has been transferred to their account. But some still remain. That transfer will happen soon,” he said.

“Of the 300 that were built, at least 100 toilets have collapsed entirely. Another 200 are so poorly constructed that they cannot be used”

A senior district official from Meerut says that to avoid the kind of corruption that has been alleged in Pabla, the SBM guidelines specify that the money should be transferred directly to the accounts of beneficiaries. “Often what happens is that the pradhan keeps the money and says that he will build toilets for everyone. Naturally, he is bound to use sub-standard material in order to pocket some of the money himself. SBM guidelines clearly mention that the money should be transferred directly. But these details can often be overlooked by the administration,” said the official.

The guidelines suggest that the money be transferred directly to the accounts of beneficiaries using their Aadhaar number. To implement this, village pradhans are supposed to include the Aadhaar details of beneficiaries when they send the list of village households to the district office. In our conversations with the village residents, they frequently cited the list. 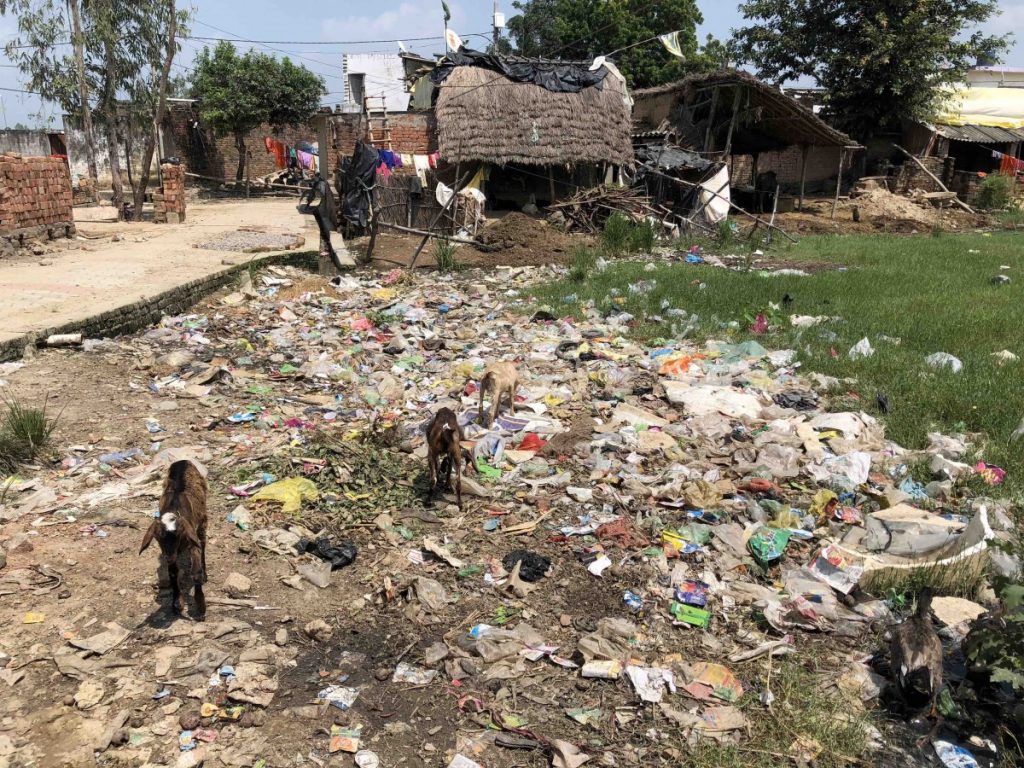 Garbage next to homes in Chinhat, Lucknow.

In Muradpur, a village in Barabanki, only 15 households out of a total of 150 have access to toilets, according to Sanjay Yadav, a young resident who claims to have surveyed all households. “The pradhan has pocketed all the money. No toilets have been built,” Yadav said.

Yadav told me that he had given a list of all households complete with their Aadhaar details to the pradhan who is yet to take any action.

Subhash Chandra, the pradhan of the village, admitted that some toilets which are yet to be built will be constructed by October 2. “Around 20 toilets are to be built. We will build them by October 2,” said Chandra.

I checked with Yadav on October 2 on the phone and he claimed that only five more toilets had been built. Chandra did not respond to several calls that I made to him.

“For now, we continue to defecate in the open,” said Yadav.