Journalists covering the case are being intimidated and blocked from accessing the village. 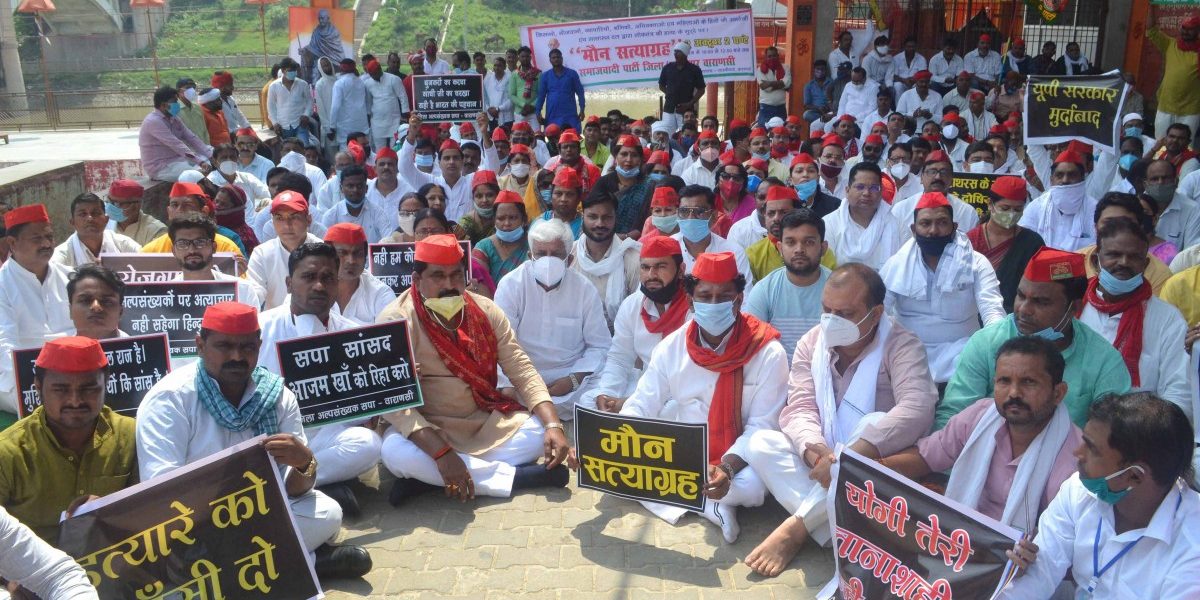 Lucknow: Evidently chagrined over media reports exposing the truth about what’s happened in Hathras, the Uttar Pradesh government on Friday sought to create curfew-like conditions, preventing people from staging any kind of protest against the ghastly incident in which a 19-year-old Dalit woman was gang-raped and brutalised, following which she died in a Delhi hospital on Tuesday night.

Frustration writ large on the faces of top government officials, who had not imagined that the high court would take suo moto cognisance of the horrific incident and get the case registered as a public interest litigation (PIL). What seems to have given jitters to the Yogi Adityanath government was the summoning of all senior and junior officials involved in the case to appear before the court on October 12.

Since the high court division bench comprising Justices Rajan Roy and Jaspreet Singh have stated that they were relying largely on relevant reports in the print and electronic media, the policemen and other officials in the dock were openly taking it out on reporters today.

Apart from a complete ban on media in Hathras, reports of mediapersons being intimidated and roughed up have come from other parts of the state also. At least in Hathras and Lucknow, journalists were physically prevented from taking pictures or shooting videos of protests being staged by activists, politicians or students.

Hathras was turned into a fortress guarded by thousands of policemen, who had put up barricades about two kilometres from the village to prevent anyone from entering the area. A video that went viral earlier during the day showed a female reporter from a leading national TV channel being intimidated by policemen on duty in Hathras. When the reporter asked them to show her the order under which the media was being disallowed to go to the victim’s village, the senior policemen on duty flatly told her, “Upar se aadesh hain (Orders have come from above).”

In Lucknow, young freelance journalist Asad Rizvi was intimidated and manhandled, and his camera memory card was snatched simply because he was trying to capture how even on Gandhi Jayanti, the police was disallowing people from going to the statue of Mahatma Gandhi at Lucknow’s GPO park to pay their homage to the father of the nation. The statue has been a traditional spot for staging peaceful protest demonstrations but on Gandhi Jayanti, many go there to offer flowers or sing the Mahatma’s favourite hymns.

According to reports from Hathras, the victim’s family are virtually under house arrest. They were not allowed to have any interactions with the media. When a family member tried to get in touch with a TV reporter, the police ensured that he was pushed back into his house. A cousin of the victim was heard telling a reporter on video that the district magistrate of Hathras had gone to the extent of rebuking and pushing the woman’s father because he had refused to alter his statement, in which he had clearly stated that no one from the family was allowed to be anywhere close the victim’s funeral pyre.

The police was caught on the wrong foot when they forcibly carried out the woman’s cremation between 2 am and 3 am. Not only did they not care to observe any of the Hindu rituals, but with a view to ensuring faster burning of the body, they also reportedly sprinkled petrol on the pyre.

All these visuals have been taken note of by the high court, and that was what made UP authorities even angrier with mediapersons, who managed to capture all the misdeeds of the men in khakhi.

The government top brass were heard blaming it all on the media and opposition parties. “The Congress and Samajwadi Party were only trying to exploit the incident to serve their political ends,” remarked senior minister Siddharth Nath Singh, who tried to dilute the incident by insisting “there was no rape and that has been confirmed both in the post-mortem as well as in the subsequent forensic report”.

What he failed to explain was, why the cops were waiting for a post-mortem to confirm whether rape was committed or not. After all, the badly wounded woman was in the Hathras district hospital for three days after which she remained hospitalised for more than 10 days in the Jawaharlal Nehru Medical College in Aligarh.

It appears that the main objective of the police was to refute the charge of gang-rape. No wonder all forces were working in that direction. Even UP additional director general of police (law and order) Prashant Kumar was busy trying to convince all and sundry that the absence of semen on the woman’s body was enough to prove that there was “no rape at all”. How forensic experts were expecting to find semen precisely 16 days after the alleged gang-rape speaks volumes of the competence of the cops handling the case. What is even more astounding that these cops seem blissfully unaware of the post-Nirbhaya amendment in the rape law, in which the definition stands drastically changed to widen the scope of rape and does not require the presence of semen to establish the crime.

From the course of events, it is amply evident how the ruling dispensation is out to not only destroy and suppress evidence but also keep media at bay, so that those who call the shots for all the wrong reasons can get away with murder – literally.

Note: Asad Rizvi writes for The Wire as well as other media platforms.