In a video that has gone viral, Dhirendra Singh had said that he served in the Army for 18 years and that on the day of the incident he had only tried to save his family. 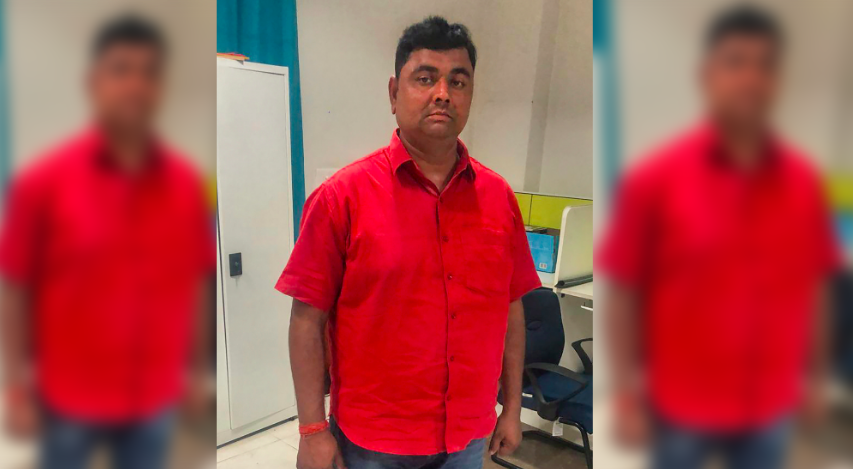 BJP leader Dhirendra Singh, the main accused of the Ballia firing incident, after his arrest on October 18. Photo: PTI

New Delhi: A Special Task Force of the Uttar Pradesh Police on Sunday arrested the main accused in the Ballia firing incident, BJP leader Dhirendra Pratap Singh, after he evaded arrest for two days since the shooting. He is being interrogated at an undisclosed location, according to reports.

A 46-year-old man Jai Prakash had died at the firing at a meeting attended by senior administration and police officials in Ballia, 300 kilometres from the state capital of Lucknow. A fracas had broken out at the meeting at Durjanpur village over the allotment of ration shops.

Arms were recovered from the possession of Singh’s accomplices, according to police.

Earlier, police had said it would invoke the stringent National Security Act and Gangster Act against the accused.

Dhirendra Singh & his accomplices were arrested from Lucknow today. They’re being questioned at an undisclosed location. Arms recovered from the possession of his accomplices. STF is gathering more information on the weapons used at the time of the incident: IG STF Amitabh Yash https://t.co/WaR8i7TKxS

Dhirendra Pratap Singh, in a video that has gone viral on social media, had blamed the SDM, CO and the police of ignoring his request to deploy police personnel during the meeting and claimed that one of his family members died in the incident, while eight were injured.

Singh had said that he served in the Army for 18 years and that on the day of the incident he had only tried to save his family as he saw his 80-year-old father and sister-in-law being attacked in the presence of administration officials.

Meanwhile, two other accused persons were arrested on Sunday morning.

DIG of Azamgarh Range Subhash Chandra Dubey said, “On Sunday morning, named accused Santosh Yadav and Amarjeet Yadav were arrested in Vaishali area of Ballia city. They were carrying a cash reward of Rs 50,000 on their heads. The properties of the accused will be seized under the Gangster Act.”

Twelve teams had been formed to nab the other accused according to the police, who announced a cash reward of Rs 50,000 on their arrest.

The FIR had named eight accused and mentioned “20-25” unidentified people in the incident.

The incident has snowballed into a major political controversy after BJP MLA from Bariya assembly seat Surendra Singh came out in support of the main accused. Singh is known for making controversial and glib statements.

On Saturday, Surendra Singh visited Reoti Police Station with the family members of the accused, claiming that they had also suffered injuries in the incident and an FIR should be registered on their complaint.

BJP MLA Surendra Singh also visited the district hospital, where he claimed the family members of the accused who were injured in the incident were admitted.

He was seen wiping his tears as the women in the group accompanying him wailed.

“It is natural to get emotional on seeing the pain of others,” the BJP MLA said. He also questioned the role of the administration in the incident.

Delegations of the Samajwadi Party (SP) and the Bahujan Samaj Party (BSP) met the family members of the deceased and attacked the Yogi Adityanath government for the law and order situation.

The Samajwadi Party said that on its president Akhilesh Yadav’s direction, an eight-member delegation led by Dayaram Pal met the family of Jai Prakash and assured it of financial help from the party.

“The family has suffered the loss for no fault of their own,” a delegation member said.

“The main accused in the case had earlier too misbehaved with officials and its result is that Jai Prakash Pal lost his life,” Ambika Chaudhary told reporters, alleging that the ruling party was “blatantly patronising criminals to instigate caste frenzy”.

SP leader Lalji Verma, who later visited the family, demanded that a case be lodged against the people defending the accused.

“The way the murder was committed in the presence of police and administrative officials is a certificate of jungle raj in Uttar Pradesh,” Verma alleged.

Under the NSA, one can be detained without a charge for up to 12 months if authorities are satisfied that the person is a threat to national security or law and order.

Under Section 14 of the the UP Gangsters and Anti-Social Activities (Prevention) Act, a district magistrate can order attachment of property, whether movable or immovable, if there is reason to believe that it has been acquired as a commission for an offence triable under this law.

The family of the deceased has demanded a compensation of Rs 50 lakh, a government job for his son, pension to his widow, besides strict action against the culprits.

Police had admitted that there appeared to be “laxity” on their part and suspended nine personnel, including three sub-inspectors and six constables, who were posted at Reoti Police Station.