A retired IAS officer has now been booked by the police for tweeting the purported audio clip of a conversation between two members of the UP government's social media cell talking about money for tweeting in favour of the CM.

New Delhi: The Uttar Pradesh government’s social media head resigned after an alleged audio clip where two members of the team appear to be discussing the price for each tweet posted in “favour” of Chief Minister Adityanath went viral on Twitter.

Retired IAS officer Surya Pratap Singh on Sunday (May 30) tweeted the purported audio clip of a conversation between the two members of the social media cell of the UP government. The members are reportedly heard talking about a remuneration of Rs 2 for tweeting in favour of Adityanath.

Singh shared the audio clip on his Twitter profile, accusing the UP government’s social media cell of paying “trolls” Rs 2 per tweet in favour of the chief minister. He added that Gajendra Chauhan, actor and member of the Bharatiya Janata Party (BJP), would retweet those tweets, ostensibly to give them more traction.

He asked in his tweet, “The information department should reveal how much money is being spent on thousands of these trends. Is people’s money being used for this despite the fact that the poor don’t have enough to eat?”

Manmohan Singh, the UP government’s head of social media in Lucknow, resigned on the same day.

The timing of Manmohan Singh’s resignation from the UP social media cell has raised eyebrows. Many officials from the social media cell with whom The Wire spoke say that Singh may have resigned due to pressure from the government after the incident. However, Singh himself told The Wire that he had not resigned because of any kind of pressure.

“I was discontent with the way things were functioning because of some issues. My resignation had nothing to do with this controversy. I have always maintained the sanctity of my work, and I had absolutely nothing to do with the audio clip,” he told The Wire. He had been part of the UP social media cell since 2019.

Also read: Party Strengths, Possible Alliances: What’s in Store for the 2022 up Elections?

The Wire spoke with another member of the government’s social media team who said that there is a lack of coherence among social media team members, and that senior members often neglect suggestions by employees.

A series of incidents that include a suicide note left by a social media cell worker alleging mental harassment, a resignation letter by another worker talking about incoherence among members of the team, which The Wire has accessed, and the most recent and controversial audio clip point to the possibility of grave internal conflict in the UP government’s social media cell.

On May 19, Parth Srivastava, who handled social media for the UP government’s information department, died by suicide at his Lucknow residence. His family said that in his suicide letter, Srivastava had blamed two of his seniors for mental harassment.

His mother, Rama Srivastava, requested chief minister Adityanath for justice. She also said that her 27-year-old son was working under too much pressure, and alleged that stress and mental harassment were the reasons behind his death.

[If you know someone – friend or family member – at risk of suicide, please reach out to them. The Suicide Prevention India Foundation maintains a list of telephone numbers they can call to speak in confidence. Icall, a counselling service run by TISS, has maintained a crowdsourced list of therapists across the country. You could also take them to the nearest hospital.]

A campaign called “Justice4Parth” was started by a close friend of Srivastava.

On July 12, 2020, Atul Kushwaha, a temporary employee of BECIL, the firm that handles the social media accounts of the UP government, wrote a letter saying that some employees within their social media cell collaborated with “outsiders” to derail the pre-decided hashtag.

“Some employees, for their own personal gains, run hashtags completely different from what has been decided. They work against our social media hub and mislead officials, which only benefits their interests, and that of influencers,” the letter read. 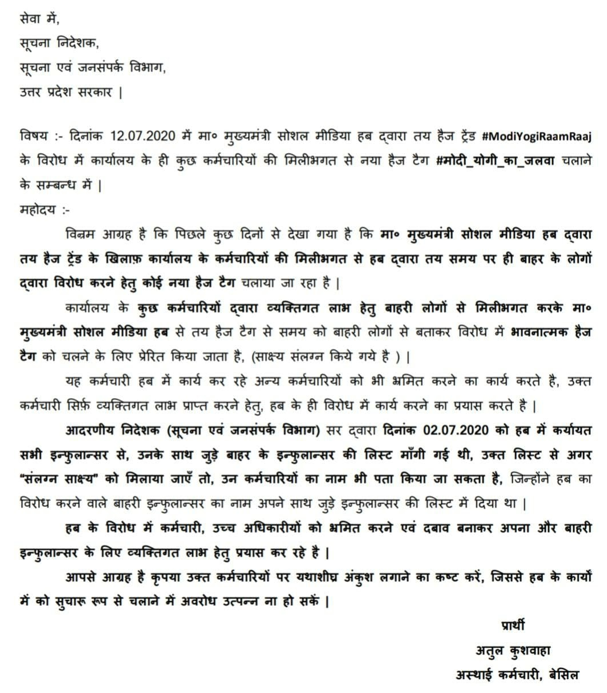 A former member of the UP government’s social media cell, on condition of anonymity, told The Wire that there is internal conflict between different members of the team, broadly on the question of strategy.

“There is a divide in UP social media. One side is religious and short-sighted, and the other comprises bureaucrats who are sensible and strategic in their approach. The first lobby doesn’t really like the second one, and vice versa,” he said. Further, he told The Wire that a new agency was recently hired by the UP government, which has contributed to the woes of the workers. “But these things rarely happen in the public domain,” he added.

Meanwhile, an FIR was filed against retired IAS officer Surya Pratap Singh and two others on Tuesday for sharing the audio clip on Twitter. The FIR, filed by Kanpur Police, invokes Section 505 (statements conducing to public mischief) of the Indian Penal Code and Section 66 (computer-related offences) of the Information Technology Act, 2000.

Vir Singh, station house officer of Kalyanpur police station told The Wire that the matter is being investigated and action will be taken accordingly.

There have been six FIRs against Singh –who joined the IAS in 1982 and retired in 2016 – since he joined Twitter in 2020. Several attempts have also been made by unknown miscreants to break into his house. Speaking to The Wire, he said that he is not fighting for himself. “I could have settled somewhere outside the country and led a lavish life. However, I chose to raise issues of common Indians, and fight for their cause. I am fighting to raise issues of the community and protect democracy at the last stage of my life,” he said.

“I thought that I, being a former IAS officer, would be able to make common people’s issues approachable to the government. Asking questions as a common man, a civilian who is surviving on pension – I cannot afford to fight with such a mighty government.”

“The question is: how come asking a question, even criticising becomes tantamount to waging a war against the state?” he asked.

He added that he believes that if the government takes criticism as a suggestion, they it may even benefit from it.