Unable to Get Citizenship, 800 Pakistani Hindus Returned From India in 2021: Report

Despite two Union government notifications as well as the passing of the Citizenship (Amendment) Act set to fast-track citizenship applications for such migrants, no progress has reportedly been made. 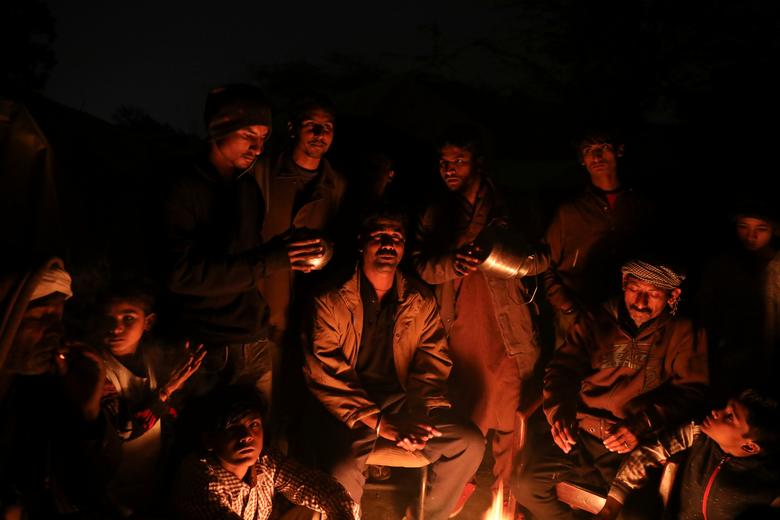 Shyam and Geeta's family and friends sit around a bonfire as they sing songs at their wedding, outside makeshift huts that were built using wood collected from surrounding trees, at a Hindu refugee settlement situated amongst a woodland area near Signature Bridge, a highway overpass in New Delhi, India, January 21, 2020. Photo: Reuters/Anushree Fadnavis

New Delhi: Approximately 800 Hindus in Rajasthan, who had come to India from Pakistan in order to escape religious persecution, had to return to their country in 2021 because they were unable to secure Indian citizenship, according to the Seemant Lok Sangathan, an advocacy group for the rights of Pakistani migrants in India.

According to a report by the Hindu, this occurred despite efforts by the Ministry of Home Affairs (MHA) in 2018 and again in 2021 to allow Hindus, Christians, Sikhs, Parsis, Jain and Buddhists from Pakistan, Afghanistan and Bangladesh to apply for Indian citizenship online.

“Once they (Pakistani Hindus) return, they are used by Pakistani agencies to defame India. They are paraded before the media and made to say that they were ill-treated here (in India),” the newspaper quoted Hindu Singh Sodha, president of the Sanghatan, as saying.

In 2018, the MHA had issued a notification authorising 16 district collectors across seven Indian states to register members from the above minority communities as Indian citizens through an online application facility.

The authorisation was given to the collectors of Raipur in Chhattisgarh; Ahmedabad, Gandhinagar and Kutch in Gujarat; Bhopal and Indore in Madhya Pradesh; Nagpur, Mumbai, Pune and Thane in Maharashtra; Jodhpur, Jaisalmer and Jaipur in Rajasthan; Lucknow in Uttar Pradesh; and West Delhi and South Delhi.

It is important to note that these notifications for fast-tracked citizenship were made under the Citizenship Act, 1955 and not the Citizenship (Amendment) Act (CAA), 2019 since the rules for the latter are yet to be framed.

The cut-off date before which these undocumented immigrants had to have entered India was set as December 31, 2014 and said that the application for citizenship shall be submitted online.

However, as the Hindu report notes, the online portal for applications does not expired Pakistani passports, meaning that undocumented Pakistani migrants are forced to make a beeline for the Pakistani high commission to get their passports renewed.

According to Sodha, the prices migrants have to pay to do so are exorbitant, with a family of ten having to pay more Rs 1 lakh to get their passports renewed.

“These people come to India amid great financial hardships and to cough up such a high amount of money is not feasible,” the newspaper quoted Sodha as saying.

Sodha also noted that many migrants opt to submit their applications to the respective collectors physically, in the offline mode.

In December 2021, the MHA had submitted to the Rajya Sabha that 10,635 applications for citizenship were pending with the Ministry through the online portal, of which 7,306 applicants were from Pakistan.

Sodha, however, claims that as many as 25,000 migrants are waiting for Indian citizenship in Rajasthan alone, also saying that many of them have been waiting for more than a decade.

The controversial CAA had provisions to fast-track the citizenship applications of migrants from the six communities, coming from the three above-mentioned countries, by reducing the mandatory period of their residence in India from 11 years to five years.

However, this particular provision is irrelevant for all the migrants who have already waited 11 years for citizenship, seeing no progress made on their applications.

The CAA had triggered widespread protests across the country, as it was seen as discriminatory against Muslims and a way to strip them of their citizenship.