BJP's Manish Bhanushali has claimed to be an informer in the case. The other civilian S.K. Gosavi is a private detective, reports say. 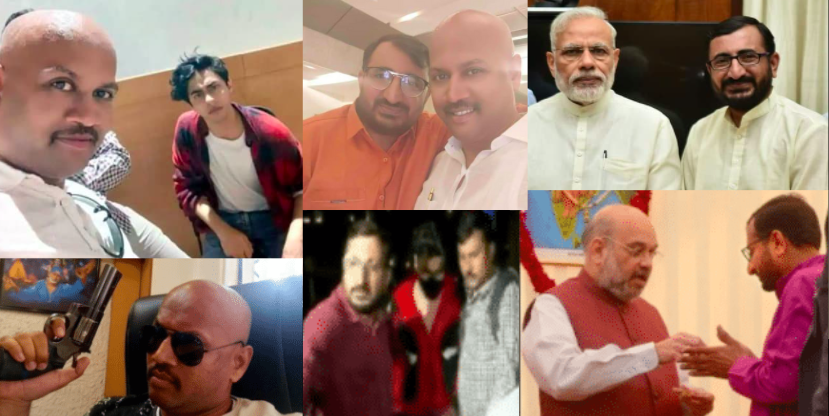 Images shared on Twitter by NCP and journalists showing the two civilians at the raid and elsewhere, and their connections to top BJP leaders.

New Delhi: The Nationalist Congress Party alleged on Wednesday, October 6 that two people in the Narcotics Control Bureau team that raided the cruise ship off Mumbai, leading to the arrest of Bollywood star Shah Rukh Khan’s son, were civilians and one of them is a member of the Bharatiya Janata Party. The latter has confessed in a TV interview that he is, indeed, a BJP member and was an informer in the case.

The Narcotics Control Bureau (NCB) has so far arrested 17 people, including Khan’s son Aryan, after allegedly seizing drugs from the Goa-bound ship on Saturday, October 2.

“The drama was fake. They did not find drugs on the ship,” NCP spokesperson and Maharashtra Minorities Affairs Minister Nawab Malik claimed.

NCB has denied these claims.

At a press meet, Malik showed videos of the raid to bolster his claim.

“A man who is seen escorting Aryan Khan in one of the videos was not an NCB official, and his social media profile states that he is a private detective based in Kuala Lumpur…Further, two men are seen escorting Arbaaz Merchant, also arrested in the case, in another video, and one of them is a member of the BJP,” Malik said.

“If these two men are not officials of the NCB, then why were they escorting two high-profile people?” he asked.

Suryawanshi posted photos on Twitter that showed Gosavi posing with guns. He is also involved in a case of fraud, Suryawanshi tweeted.

SK Govasai who was seen with #AryanKhan during the NCB raid & arrest. Gosavi is private detective per per his profile. The fraudulent case has been registered against him duping the person for Rs 3 lakh in promise of job. NCP asks how private person can be involved in NCB raid? pic.twitter.com/UDgkJrryUl

Twitter users pointed out that Gosavi had also taken a selfie with Aryan Khan, drawing attention to the fact that such action is unusual for officials on duty.

This is the same guy. How can private individuals be involved in handling an accused in an NCB a case. What’s going on? https://t.co/uV4c7bhGCX pic.twitter.com/eyYz5sHuPn

Journalist Meenal Baghel pointed out that out of the two, the BJP worker, Manish Bhanushali, seen escorting Aryan Khan, was a not from the NCB but was seen in photographs playing an active role in the arrests, similar to those of officials.

As for the other guy in the photo, take a look, leading Aryan Khan for questioning. He too is not from the NCB. pic.twitter.com/GwQgzEtL1Y

In an interview with India Today, Manish Bhanushali said he was a loyal worker of BJP but that the party was not connected to him going to the NCB with information. Bhanushali said that he received information on a “drug party” on the cruise through a friend on WhatsApp.

EXCLUSIVE: Manish Bhanushali to India Today, “Yes, I was with NCB team to provide them information. I am a loyal worker of BJP.”
Watch #6PMPrime with @nabilajamal_#ITVideo pic.twitter.com/v6kxHPdfeg

Although Bhanushali claimed in the India Today interview that he was not a position holder in BJP, photos tweeted by fact-checking website Alt News co-founder Mohammad Zubair show him in the company of Narendra Modi and Amit Shah.

The NCP’s official account has also followed it up with more photo evidence.

The man seen with Merchant was in Gujarat on September 21-22 and could be connected to the seizure of about 3,000 kilograms of heroin at Mundra Port, Malik claimed, asking the BJP to come clear on this person’s credentials.

“The NCB is being used by the BJP to malign people, the Maharashtra government and Bollywood,” Malik said, alleging that the anti-drug agency was targeting those who are against the saffron party.

PTI has reported that Malik’s son-in-law Sameer Khan too had been arrested by the NCB on January 13, 2021, in an alleged drug case. He got bail in September.