In language reminiscent of the Trump administration’s threats against Twitter last year, the Centre says Twitter’s legal status as an intermediary might be called into question if it does not accede to official demands.

New Delhi: The Union government has objected to Twitter labelling as “manipulated media” a tweet containing screenshots of a purported Congress ‘toolkit’ by BJP chief spokesperson Sambit Patra, saying that the matter is pending investigation before a law enforcement agency and amounts to the company prejudging the outcome.

“The Ministry of Electronics and IT has written a strong communication to the global team of Twitter, registering its objection to the use of ‘manipulated media’ tag on certain tweets made by Indian political leaders with reference to a toolkit created to undermine, derail and demean the efforts of the government against the COVID-19 pandemic,” an unidentified ministry source was quoted by PTI as saying.

“Such a tag by Twitter appears to be pre-judged, prejudiced and a deliberate attempt to colour the investigation by local law enforcement agency”, the sources said and added that the ministry had termed such unilateral action by Twitter as an effort to influence the fair investigation process and “a clear overreach, which is totally unwarranted”.

This is the first time the government has cited due process in defence of a social media post.

In the past, Twitter has been asked to take down content and block handles, including of a reputed media platform like Caravan magazine on the basis of directives from the government. Many of those takedown requests involved matters where the police had either filed omnibus FIRs or was in the process of conducting investigations and the Ministry of Electronics and Information Technology has never previously said that such action amounted to “prejudging” the issue.

This time, however, the ministry says that only the police’s investigation will determine the veracity of the content and not Twitter, and has asked the social media company not to interfere in the investigation process.

The ministry further communicated to Twitter that a complaint has already been made by a concerned party before the local law enforcement agency questioning the veracity of the toolkit and the same was under investigation. While the investigation is underway, Twitter has unilaterally drawn a conclusion in this matter and arbitrarily tagged it as ‘manipulated media’, the government sources said.

The unidentified sources alleged that such action not only dilutes the credibility of Twitter as a neutral and unbiased platform facilitating an exchange of views by the users but also puts a question mark on Twitter’s status as an “intermediary”. The reference to Twitter’s legal status as an intermediary is a threat that is reminiscent of action the Trump administration attempted to take when Twitter began acting against fake news promoted by Donald Trump and his supporters last year. 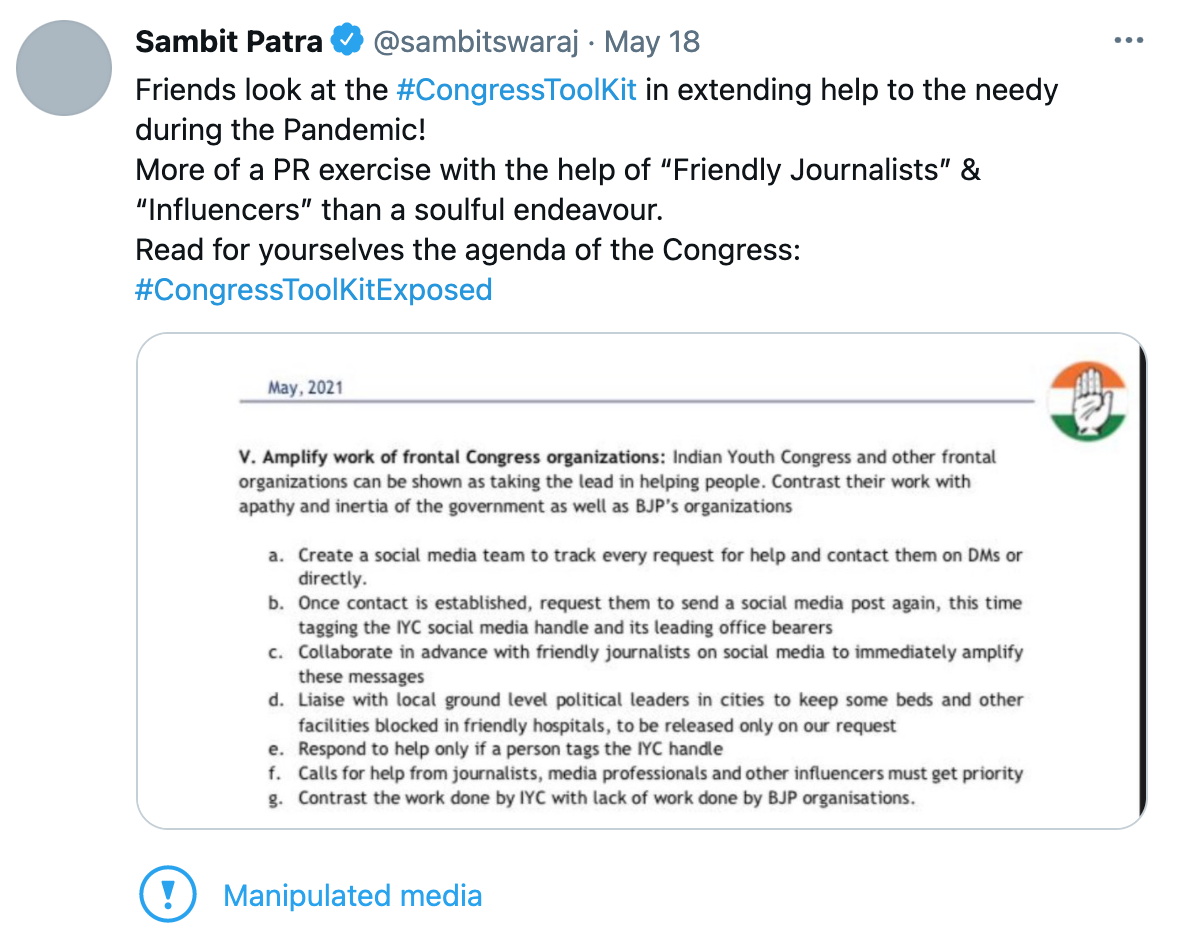 Screenshot of Sambit Patra’s tweet on what the BJP claimed was the Congress party’s ‘Covid-19 Toolkit’. Twitter has marked it as ‘manipulated media’.

In its policy on designating content as manipulated media, Twitter says,“…we may label Tweets that include media (videos, audio, and images) that have been deceptively altered or fabricated. In addition, you may not share deceptively altered media on Twitter in ways that mislead or deceive people about the media’s authenticity where threats to physical safety or other serious harm may result.”

Twitter, which has previously employed similar warnings on tweets by former US President Donald Trump about voter fraud after the 2020 elections, decided to flag Patra’s tweet after the Congress complained to the social media platform that the ensemble of pages, circulated as the party’s ‘toolkit’ by top BJP leaders, was fake. Fact-checking website AltNews had also published a comprehensive report establishing that the document which the BJP’s top leadership has been circulating on social media was created on a forged Congress letterhead.

A number of BJP and RSS leaders had tweeted about the alleged toolkit with the hashtag #CongressToolKitExposed to attack the Congress party on social media. “Friends look at the #CongressToolKit in extending help to the needy during the Pandemic! More of a PR exercise with the help of “Friendly Journalists” & “Influencers” than a soulful endeavour,” the tweet by Patra said.

The document contained a range of purported social media directives for party workers to use to attack the prime minister for his disastrous handling of the current wave of the Covid-19 pandemic.

The Congress on Thursday also wrote to Twitter asking it to permanently suspend the accounts of BJP leaders J.P. Nadda and Union minister Smriti Irani for “spreading misinformation and unrest in the society”. A day earlier, the party had lodged a police complaint seeking registration of cases against Nadda and Irani, in addition to BJP general secretary B.L. Santosh and spokesperson Sambit Patra over the alleged forgery of documents.