The Nikshay Poshan Yojana completed one year in April. 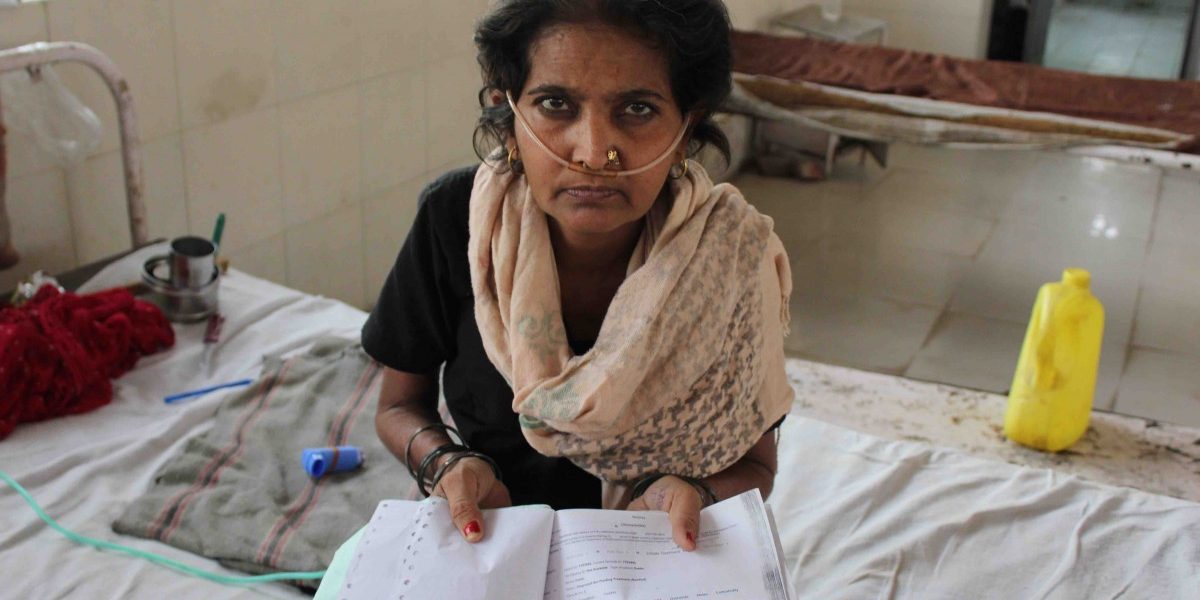 Bhudevi, a notified patient on the Nikshay portal, claims no benefit has reached her. Photo: Shruti Jain

Jaipur: Modi government’s Nikshay Poshan Yojana (NPY) to provide incentives for nutritional support to tuberculosis (TB) patients completed one year in April. Under the scheme, the government announced a monetary benefit of Rs 500 per month to each TB-notified patient during the course of their treatment with an aim to reduce the number of deaths due to the disease. According to the annual TB report 2018, an estimated four lakh deaths occurred due to TB in 2017 in India.

In Rajasthan, the notification of TB patients has inflated in the past year. Notification essentially means that a person has been diagnosed with TB but treatment is pending. As per official data, 1,59,762 cases were notified last year as compared to 1,10,044 in 2017. However, the number of beneficiaries is relatively low.

Replying to a question in the Rajya Sabha earlier this year, the government informed that only 42,292 in Rajasthan have been provided with incentive under NPY between April 2018 and January 2019. However, the government now claims that this number reached 1,19,178 in May 2019.

As per data shared by the state health directorate with The Wire, the total notified patients under the revised national TB control programme as on May 27 in both the public as well as private sector in the state stood at 2,18,614 – of these, only 1,19,178 patients have received monetary benefits.

While this figure shows a performance of 54.5%, the situation on the ground raises several questions.

The dedicated software for the scheme called the Nikshay portal suffers from duplication of IDs (a seven-digit identification number) of TB patients. For instance, KhiyaRam and Khiya Ram (with a space) are different patients on the portal with distinct Nikshay IDs. In actuality, they are the same person.

How then did this duplication happen? On May 14, when KhiyaRam went to a hospital in Nagaur, as a routine affair he was sent for a preliminary test to confirm TB. When it turned out positive, he was notified on the portal.

Three days later, he decided to move to Jaipur for better treatment. On doctor’s recommendation there, he was tested once again for confirmation. The result remained the same. While he was being notified on the portal this time, a new Nikshay ID was created for him on May 17.

This is happening with hundreds and thousands of TB patients. Without any means to uniquely identify patients on the portal, they are being notified each time they are tested positive for TB.

No means to verify duplication

There is no provision for locating a particular Nikshay ID if the patient doesn’t provide it. To search for an ID on the portal, three options are available – by name of the patient, his Nikshay ID or an old ID (which the portal doesn’t accept anymore).

So, if a patient who is already notified on the portal loses his Nikshay ID, one can only search it by his/her name – but that would give multiple options, making it difficult to identify the correct patient.

“Patients aren’t able to preserve their IDs, given to them mostly on a piece of paper which is either submitted by the hospital or is lost while their files are transferred from one public hospital to another. In such cases, how do we tally the patients if they were notified in another TB-unit in a different state or a different district? We have no option other than to create a new ID for them,” the operator added. 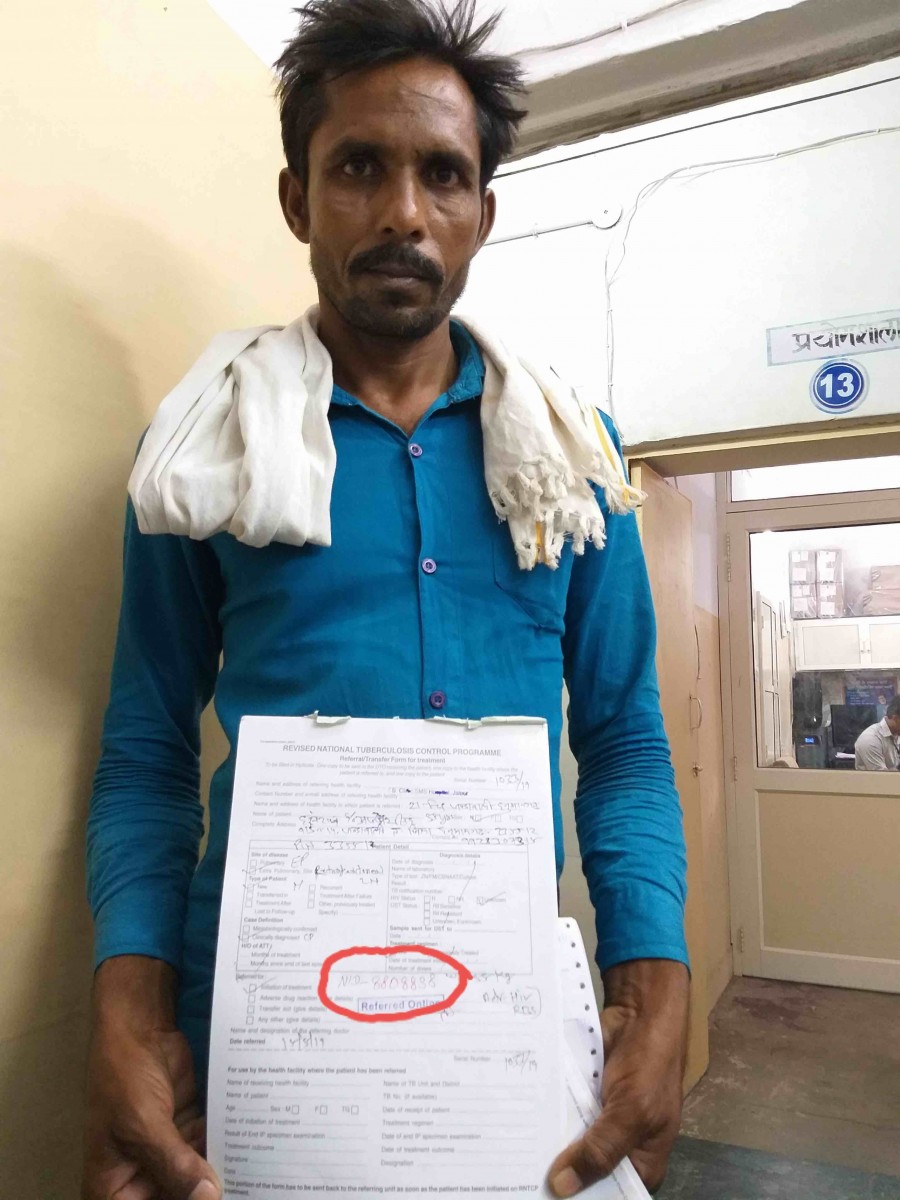 Hansraj, a TB-notified patient in Jaipur showing the document that has his Nikshay ID. Photo: Shruti Jain

Generally, when diagnosed with TB, patients tend to consult multiple doctors. In fact, doctors themselves often recommend they get re-tested in order to be sure. In all these cases, patients tend to get notified twice or more.

No means for de-duplication

There is a strict rule for de-duplication. As per the guidelines of the ministry of health and family welfare, it is the responsibility of the district tuberculosis officer to “verify and prevent duplication of same TB patients through Nikshay.”

However, the means for verifying a particular notified TB patient is actually a manual process. Speaking to The Wire, state tuberculosis officer Purshottam Soni, said: “Computer operators are provided with tablets for the purpose of analysing the details of the TB patients notified on the Nikshay portal. If they verify patients’ entries on a daily basis, then there would be no problem in dealing with the duplication, but they keep this process pending for weeks and months. No one can deal with that amount of data, leave alone de-duplicate it.”

The workers on the ground feel that even daily manual verification isn’t adequate to deal with duplication.

“Our job is to notify the patients whose test reports are positive on a daily basis. When patients come to our counter with their test slips, we feed their details on the portal and if the test is positive, they are notified. Now, if the same patient will get the test done once again, say a month later, how are we going to find whether he/she is already notified or not,” said a computer operator on the condition of anonymity.

Notified, but not receiving benefits

It has been five months since Sushila was admitted to a TB hospital in Jaipur. There is no one from her family to keep her company there. Her husband pays a visit every month or so.

Sushila is a notified TB patient on the Nikshay portal. Her medical file contains a seven-digit unique number which is her Nikshay ID. However, she has no knowledge of the monetary benefit she is entitled to under the Nikshay Poshan Yojana – a nutritional diet to be mandatorily taken during the course of TB treatment. 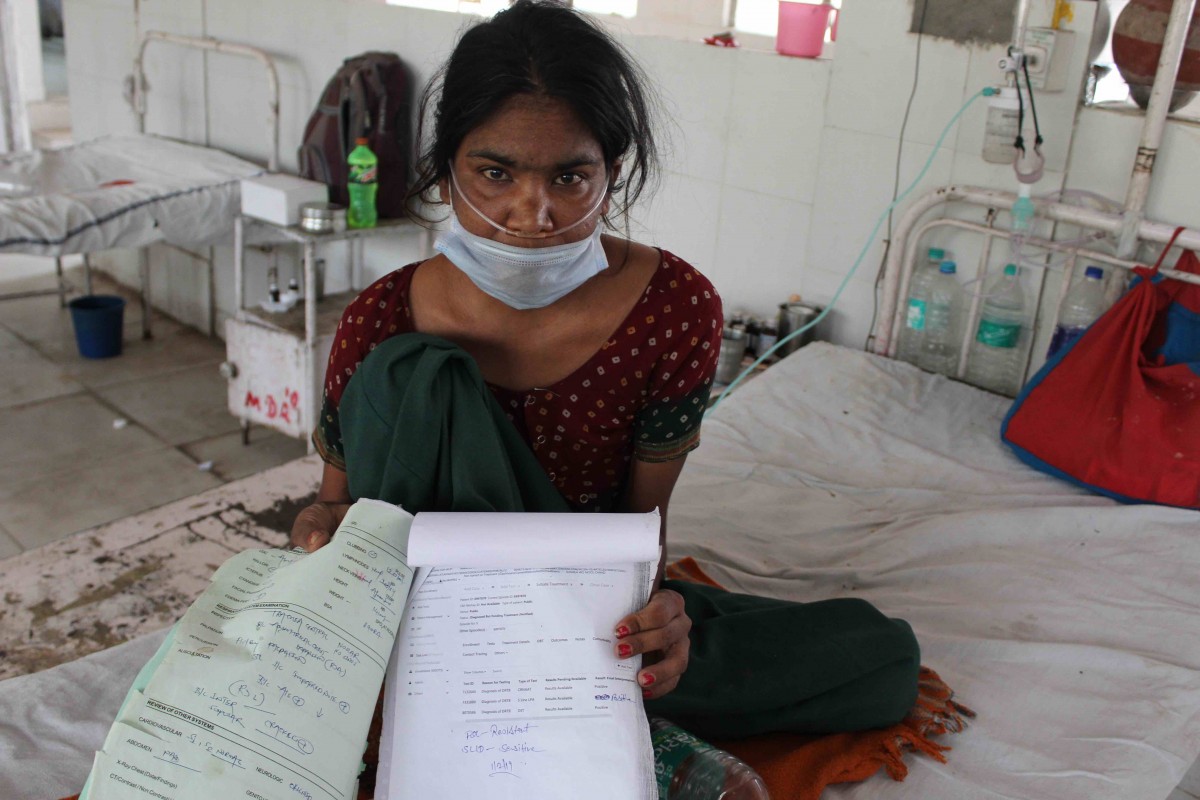 She relies entirely on what the hospital provides – milk and apple.

When The Wire accessed her Direct Benefit Transfer (DBT) status on the Nikshay portal, her benefit was pending. The benefit status flashed “waiting for maker,” meaning that the money is yet to be released by the government.

Bhudevi, another patient admitted in the same ward of the TB hospital, has a similar story. She is also a notified patient on the Nikshay portal. However, she claims no benefit has reached her.

Due to the medication, Bhudevi has lost her appetite. She doesn’t feel like eating chappatis or any other solid food item. She only consumes a glass of milk every day. At times, when Bhudevi’s son earns a little extra money, he brings her fruits.

When The Wire accessed her Nikshay ID on the portal, it showed that her ID no longer exists. As per the hospital staff, while conducting de-duplication, sometimes IDs of genuine TB patients like Bhudevi get deleted.