Trained in the RSS under veteran ideologue Govindacharya, the Tripura Chief Minister recently claimed that Internet was very much present in the 'Mahabharat' era.

New Delhi: Earlier this month, during a cultural event at the Press Club in Agartala, the new chief minister of Tripura, BJP’s Biplab Kumar Deb, broke into a song. To the strains of a popular Hindi film song “Dil diya hain jaan bhi denge” from the 1986 hit Karma, he improvised the lyrics to add, “Maine socha Tripura ko sarvasrestha rajya banana hain”, (I thought of making Tripura the best state in the country). The audience was much amused.

This bit harmless eccentricity pales before some of Deb’s other gaffes: Stating that the Chabimura rock carvings by the Gomti river in the state were “better” than Amazon, he reportedly said, “Under our government, the Chabimura tourist spot will become like the Amazon river basin of Africa.”  In the run-up to the last assembly elections, Deb, then the state BJP chief, said at a rally in Khowai district that any vote cast in the EVMs for the CPI (M), even by the then chief minister Manik Sarkar, would go to the BJP.

Deb’s claim came at a time when there was a raging debate across the country over possible EVM tampering. Several complaints were filed against his comment with the Election Commission of India (ECI), leading him to pipe down, and saying his comment was taken “out of context.”

Now he has topped it all by declaring that the Internet existed in this land long before it was invented in the West. “It is this country where communication was possible because we then had technology, Internet was there; so was the satellite communication system. It is not that internet and media wasn’t available in the age of Mahabharata,” the Tripura chief minister said at a regional workshop on computerisation and reforms in the public distribution.The lampooning in the Internet — the modern one — was severe.

Last month when Deb was sworn in as chief minister, he had raised hopes among many of better avenues of employment and development in the state than in the earlier Left Front regime — as promised in the Bharatiya Janata Party’’s 28-page ‘vision document’. But after winning initial public approval for taking some quick decisions, such as handing over cases of alleged murder of two journalists prior to the assembly polls to the Central Bureau of Investigation and setting up a committee to look into the  implementation of the Seventh Pay Commission recommendations for state government employees, Deb’s bizarre statements have been hitting the headlines and have made him a laughing stock both in the state and outside. 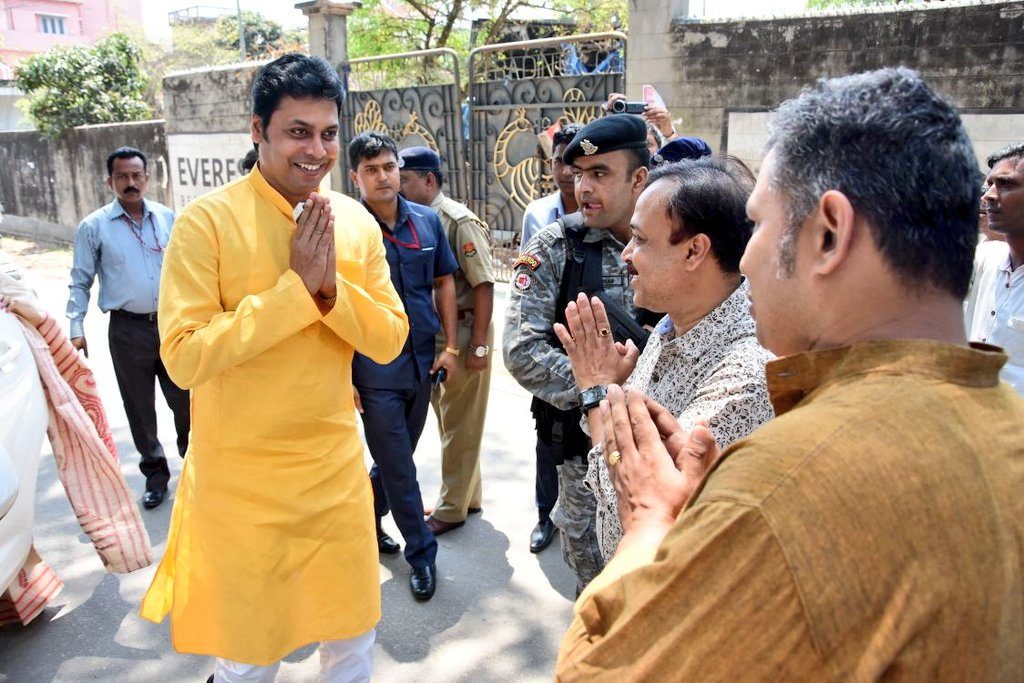 The young BJP leader, who served as an RSS volunteer in Delhi for 15 years before returning to the state in 2015 to work for the party, has joined the likes of Union minister of state Satyapal Singh when he referred to Sanjaya,  the charioteer in the Mahabharata,  and claimed that he could narrate the goings-on in the war between the Pandavas and the Kauravas in Kurukshetra to the blind king Dhritarashtra in Hastinapur because Internet and satellites existed then.

“I do not know what happened in the middle age though, between the Mahabharata era and now,” he added.  But now, with a prime minister who was active on social networking sites, the entire country had once again got familiar with technology after 2014, said Deb.

While both conventional and social media took a few digs at Deb’s outrageous claims, he got support from the state’s governor, former BJP West Bengal chief Tathagata Roy who jumped to his defence and added his bit on Twitter.

Roy tweeted, “Tripura Chief Minister’s observations about the happenings of the Puranic period are topical. It is virtually impossible to conceive of devices like ‘Divya dristi’, Pushpaka Ratha’, etc. without some kind of prototype and study thereon.”

Tripura Chief Minister’s observations about the happenings of the Puranic period are topical. It is virtually impossible to conceive of devices like ‘Divya drishti’,Pushpaka Ratha’,etc without some kind of prototype and study thereon

Twitteratti went into a tizzy, lapping up these bizarre statements, with some even asking Roy “to get well soon”.

Undeterred by the criticism, Deb, who trained under veteran RSS leaders Govindacharya and Krishna Gopal, instead of stepping back, reiterated what he had said. Accusing those flaying him for his comments as “narrow minded people who want to belittle their own nation and think highly of other countries”, Deb told the local media, “Every Indian should have a common thinking that India is best and superior country all around the world.” He said his critics should “accept the truth and should not get confused.”

This past April 18, taking part at an event in Agartala Town Hall, the chief minister also claimed the famous Chinese traveller Hieun Tsang who visited India in the ancient times was a journalist.

But it was his Internet claim that has made him a national figure. A day after defending his Internet argument, Deb, interacting with reporters, sought some time to fulfill his “dreams” for Tripura. But not before sharing another loaded gem from his book of wisdom: “A person who is not a good homemaker, can’t keep his own family happy, can never make the country happy, can’t be a good chief minister, neither can he be a good prime minister.”