Exclusive: Law Ministry Did Not Consult any Ministry, Department on Triple Talaq Bill

This falls foul of the earlier legislative consultation policy issued by the same ministry, which states that any bill should first be sent to the concerned ministry or department and their comments should be included in the cabinet note.

New Delhi: The Union Ministry of Law and Justice gave its approval to the Triple Talaq Bill last year without consulting concerned ministries, departments or any state government on it, documents obtained by The Wire in response to a Right to Information request have revealed.

After having been pending for a long time, the Muslim Women (Protection of Rights on Marriage) Bill, 2019, also known as the Triple Talaq Bill, was passed in both houses of parliament in July last year. The president’s approval has now made it a law.

During discussions in parliament, opposition MPs had asked for the bill to be sent to a select committee but that was not done. Union law minister Ravi Shankar Prasad had claimed that the bill was introduced after interactions with several “victims”.

In fact, the Supreme Court had set aside triple talaq as a form of divorce in August 2017. 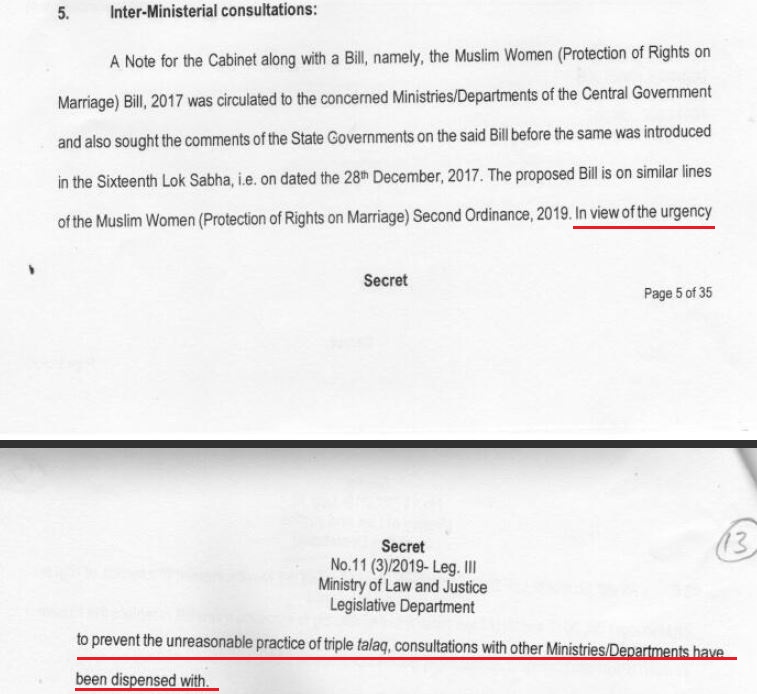 A portion of the Cabinet note on the Triple Talaq Bill.

A file note bearing Ravi Shankar Prasad’s signature reads, “A note for the Cabinet along with a Bill, namely, the Muslim Women (Protection of Rights on Marriage) Bill, 2017 was circulated to the concerned Ministries/Departments of the Central Government and also sought the comments of the State Governments on the said Bill before the same was introduced in the Sixteenth Lok Sabha.”

However, the note further adds, “In view of the urgency to prevent the unreasonable practice of triple talaq, the Inter-Ministerial consultations have been dispensed with.”

This step by the law ministry contradicts the earlier legislative consultation policy issued by it in 2014, which states that any bill should first be sent to the concerned ministry or department and their comments should be included in the cabinet note.

In a meeting of the committee of secretaries (CoS) chaired by the cabinet secretary in 2014,  it was also decided that if any department or ministry thinks that pre-legislative consultation is not possible, they should give a reason for it.

However, no such reason is mentioned in the confidential cabinet note on the Triple Talaq Bill obtained by The Wire. It reiterates that in view of the urgent need to stop the unfair practice of triple talaq, inter-ministerial consultations have been omitted.

Former Lok Sabha secretary general P.D.T. Acharya called it an example of a practice which is against the rules.

“Ministry of Home Affairs, the Ministry of Minority Affairs, and the Ministry of Women and Child Development should have been consulted on the Triple Talaq Bill. If it has not been done, it is against the rules. This is not the correct process. All relevant ministries should be consulted,” he said. 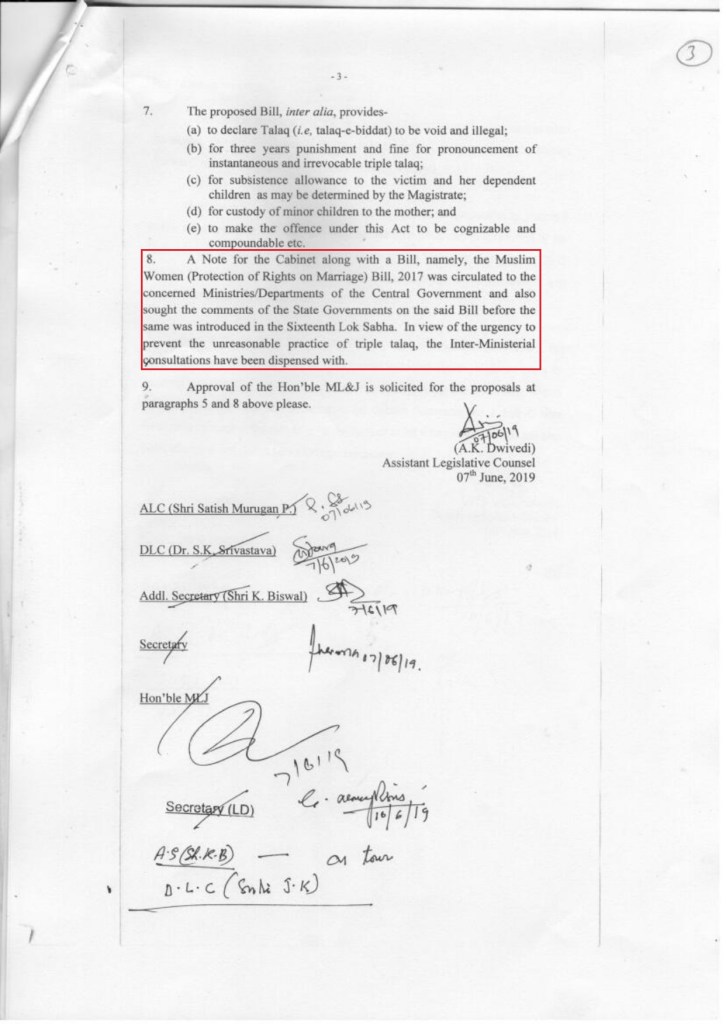 File notings on a copy of the Triple Talaq Bill with the Union law minister’s signature.

The Muslim Women (Protection of Rights on Marriage) Act stipulates that if a Muslim husband pronounces instant triple talaq (talaq-e-bidat) in any form – oral, written, or electronic – then such a proclamation will be illegal and void.

It also provides that a triple talaq victim will be entitled to receive maintenance allowance from her husband for herself and her dependent children.

The government has been criticised for making divorce, which is a civil matter, a criminal matter without any basis.

The opposition had also sought to know whether the government had conducted any survey or collected data on the number of women who are victims of instant talaq.

There is no answer to these questions in the documents on the basis of which the bill has been formulated. No such figures are mentioned in the confidential note tabled before the cabinet.

The 35-page cabinet note states that after the order of the Supreme Court, many cases have been reported in which Muslim men have resorted to the practice of talaq-e-bidat.

However, on December 12, 2018 Ravi Shankar Prasad had told the Lok Sabha in response to a question by Congress MP Sushmita Dev that, till then, a total of 248 cases had been reported since the Supreme Court’s decision regarding triple talaq.

The Wire has sent a list of questions to the law ministry secretary and Ravi Shankar Prasad but no response has been received yet. The story will be updated as and when their responses are received.