Why the New Trafficking Bill Is a Cause for Worry

The Bill fails to meet any of its stated goals of rehabilitation and creates further confusion around the legal regime related to trafficking. 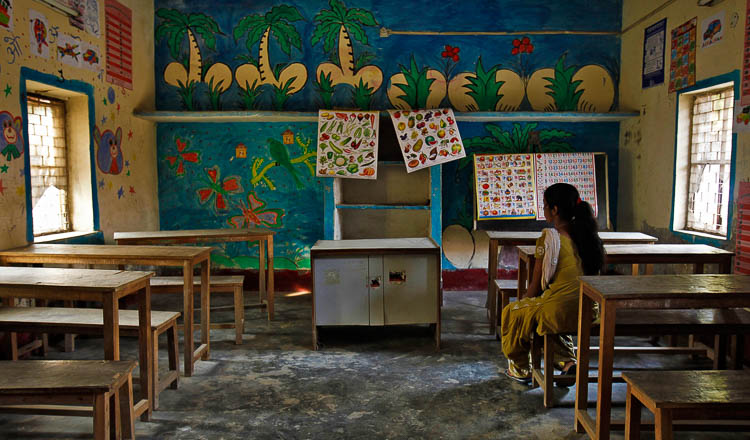 A 16-year-old girl sits inside a protection home on the outskirts of New Delhi in 2012. Credit: Reuters

On February 28, 2018, the Union cabinet approved the Trafficking of Persons (Prevention, Protection and Rehabilitation) Bill, 2018. Although the latest version has not been made public, the previous drafts of the Bill and media reports surrounding it present an alarming development.

The new Bill falls into the familiar trap of trying to use criminal law to solve a social problem. The IPC already criminalises trafficking under Section 370. The new Bill introduces 15 new offences on top of this, and introduces numerous clauses that make investigation and enforcement easier to misuse.

The ambiguity of these new clauses is a key issue, running the risk of unfairly targeting marginalised actors and relying heavily on criminalisation rather than rehabilitation. By stripping trafficking from its social and political context – things including structural poverty aggravated by neoliberal policies, the economic and gendered dimensions of migration and labour – the Bill conveniently locates blame on these very people.

Problems with the Bill

Despite having been introduced as an effort to lay down a comprehensive law on trafficking, the Bill brings no clarity to the fragmented legal framework around trafficking. It only creates further confusion by introducing existing offences in the new packaging of “aggravated offences”, adding more layers of bureaucracy and complicating enforcement.

Relies on outdated models of raid, rescue and rehabilitation

Although the Bill was touted as a first of its kind for providing comprehensive rehabilitation, the focus of the Bill remains on delineating offences instead of providing a meaningful rehabilitation model.

The Bill instead relies on the raid, rescue and rehabilitation model, which in its current form is nothing but victim detention, resulting in the complete loss of liberty for an adult woman. The rehabilitation process disregards the wishes and choices of the “rescued” person, especially sex workers. Such a paternalistic approach to rehabilitation ignores the agency of adult women to determine what is good for them. Each individual has the right to dictate whether or not they want rehabilitation, and those who do not should be allowed to pursue any occupation of their choice.

Given the dismal condition of many rehabilitation homes and the lack of an alternate proposal for rehabilitation, the Bill does not even meet its stated objective.

The Bill is vague and too broad

The Bill casts a wide net on who can be charged with the offence of trafficking. For example, since ‘place of exploitation’ includes the source of trafficking, the parents of the person who is trafficked may inadvertently be brought within the purview of this Bill, for no fault of their own. Their home may be treated as a ‘place of exploitation’ and be sealed. Similarly, a bus driver whose vehicle is being used for trafficking without his knowledge can also be booked for aiding the process.

The Bill does not require “knowledge” to be established for the offence of aiding in trafficking and therefore, it is not only a slippery slope for misuse, it also opens up the possibility of anyone who is inadvertently considered to have assisted in the process to be booked under this Bill.

The Bill overturns well-established human rights norms that require proof to establish guilt for an offence. If this Bill were to be passed into law, the burden of proof will rest with the offender to establish his/her innocence. These sorts of aggravated measures are unprecedented and rarely applied other than in counter-terrorism policies.

Given the wide ambit and the vague clauses of the Bill, coupled with the heavy punishment prescribed for each offence (minimum punishment of ten years), the Bill is bound to disproportionately affect those who are already vulnerable and marginalised. It is these groups who are often disadvantaged by the criminal justice system, owing to several factors such as limited resources, lack of access to education and lower awareness of legal rights and processes.

Some sections of the Bill are likely to have a disproportionate impact on women, especially women migrating for work in the unorganised sector, including for sex work, and young girls who elope from homes with their partners. With wide investigative powers and the ability to close down places, the Bill is likely to create heightened surveillance and restrictions on women’s mobility.

The Bill also creates an aggravated offence for pregnancy occurring in the course of trafficking, which attracts ten years of minimum imprisonment. Similarly, there is an unclear provision criminalising trafficking for marriage or under the facade of marriage. Without a clear delineation between  involuntary acts and recognising voluntary acts, this could severely limit women’s choices. Creating an aggravated offence for HIV/AIDS being contracted during trafficking could lead to enhanced risk and vulnerability for people.

Sex workers’ collectives have been left out of any consultations by the government in drafting this Bill. Credit: Reuters/Punit Paranjpe/Files

Between September 2016 and October, 2016, the All India Network of Sex Workers (AINSW), CREA, Lawyers Collective (LC) and Centre for Advocacy and Research (CFAR) held three regional consultations which had representatives from 43 sex workers-led community-based organisations. On examining the provisions of the fourth draft of the Bill (the last draft that was made available to the public), it was clear that the Bill had insidious impacts on the everyday lives of sex workers.

Although the Bill strategically does not mention “sexual exploitation” unlike its predecessors, the Bill, which is sought to be applied alongside the Immoral Traffic (Prevention) Act, 1956 and Sections 370 and 370A of the IPC, will worsen the legal situation for sex workers. Instead of clarifying the confusion in existing laws on sex work, the Bill, if passed into law, is likely to further add to the problems sex workers face.

The heightened worry around the misuse of the Bill also stems from the well-documented fact that criminalisation and punitive laws provide cover for increased violence against sex workers by the police.

Sex workers’ collectives have been left out of any consultations by the government in drafting this Bill. Sex workers are also against human trafficking and have decades of experience in implementing their own effective anti-trafficking strategies like the Self Regulatory Board, which has successfully checked the entry of minors and non-consensual persons into sex work. Instead of adopting a top-down approach to trafficking, the government must inculcate these successful models and strategies into any anti-trafficking efforts.

The Bill fails to meet any of its stated goals of rehabilitation, creates further confusion around the legal regime related to trafficking and makes enforcement a nightmare both for government agencies as well as marginalised groups such as sex workers. This Bill must, therefore, be urgently halted.

Shreshtha Das is a graduate from NALSAR University of Law and currently works at CREA, a feminist human rights organisation based in Delhi.