A petition signed by more than a dozen reputed medical practitioners has emphasised the need for transparency in handling the pandemic.

Hyderabad: Telangana chief minister K. Chandrasekhar Rao’s perception as a strong leader who has made timely interventions to contain the coronavirus epidemic came under the scanner when a doctors’ body alleged that his government may have underreported COVID-19 cases in the state.

Doctors For Seva, a collective of private doctors based in Hyderabad, raised doubts over the official data that has shown a decrease in new cases in Telangana, projecting the state to be on course to normalcy.

In a petition submitted to the five-member inter-ministerial central team, which visited Telangana for eight days to assess the ground situation on the spread of the virus, the collective emphasised the need for accuracy and transparency in handling the pandemic. The petition, signed by more than a dozen reputed medical practitioners like the public health specialist Dr Santosh Kraleti, senior paediatrician Vijayanand Jampuri, and orthopaedic surgeon G. Vedaprakash, suspected that the state government was not conducting enough tests. The petition also claims that the state is underreporting COVID-19 cases and fatalities, in an apparent bid to present a relatively rosy picture.

Lending credence to the charge of the collective, a letter by the director of medical education to various medical superintendents has surfaced, which said “all officers are hereby instructed not to collect samples from dead bodies for further Covid-19 testing”. 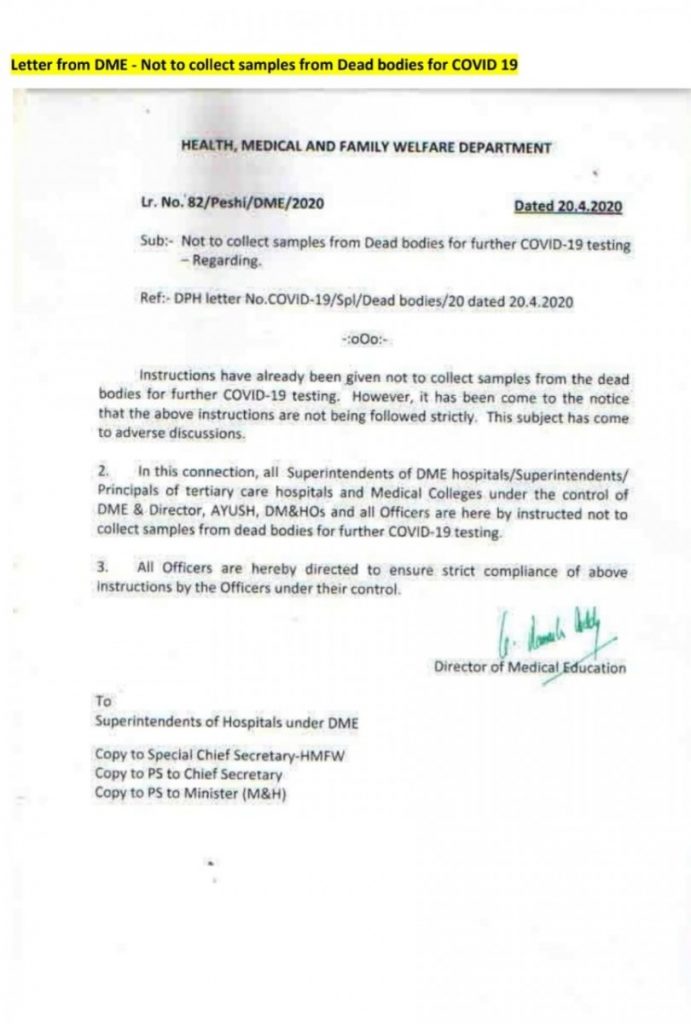 Letter by the director of medical education.

Doctors For Seva, a non-governmental organisation consisting of doctors and public health specialists from Telangana and other places, called for the government’s collaboration with the private healthcare sector in handling the COVID-19 pandemic.

Dr Sanjeev Singh Yadav, president of the Telangana branch of Indian Medical Association (IMA), said private hospitals can help the government ease the burden without much financial stress on the patients. He said that private hospitals don’t have to subsidise the treatment cost in most cases as 60% of the state’s people are covered by health insurance, while there 20-30% people are employed and have healthcare benefits.

The number of people not covered by health insurance is negligible, Dr Yadav clarified. The lack of adequate testing kits could be one of the reasons for not enough tests being done, he said.

There could be one major issue if the private sector is involved in the management of the pandemic, however. The poor in Telangana have been given health cards known as Arogyasri. But private hospitals have reportedly not been accepting them for the past two years as the government has failed to clear bills mounting up to Rs 1600 crore.

Yet, health experts have persistently been saying that Telangana should immediately step up its plans to counter the spread of the coronavirus. As per the official website of the Indian Council of Medical Research (ICMR), there are eight government and 11 private testing centres in Telangana. The private healthcare sector provides nearly 82% of inpatient beds and 76% of outpatient services in Telangana. In such a situation, the doctors’ collective felt that the Telangana government should immediately collaborate with the private health sector as a mitigation measure.

To substantiate its assertions on the question of underreporting of COVID-19 deaths, the doctors’ body mentioned a case reported in Gandhi Hospital on April 26.

“An 80-year old male patient died with COVID-19 Pneumonia in a COVID-designated hospital (Gandhi hospital) in Hyderabad and the death certificate mentioned the patient as COVID positive. However, the death is not reflected as COVID death in the COVID-19 public releases issued on a daily basis on any date from April 26-28 as the government kept maintaining that the death toll remained stable at 25 during the period up to April 28,” the petition said.

The Wire could not contact the state’s health minister Etela Rajender for his comment on the allegation.

The collective warned that underreporting will lead to a deadly impact once the lockdown is eased.

Recently, the West Bengal government also came under fire for alleged underreporting of deaths related to COVID-19. It emerged that many deaths of COVID-19 patients who had comorbidities were not recorded by the state until recently.

The lockdown has delivered a deadly blow to the state’s economy. Hyderabad, Telangana’s capital and a hub of manufacturing, tourism and knowledge economy, contributes a third of the state’s revenue. Most of these activities have been curtailed since the end of March, when the lockdown was imposed. The chief minister has also announced that the lockdown will continue in the state until May 29, albeit with some restrictions eased.

In an apparent bid to relieve the capital city of the debilitating impact of the lockdown, the government is contemplating exit plans in a calibrated manner. It is proposed to open up realty, manufacturing and entertainment sectors in a phased manner.

Telangana has reported 1,107 COVID-19 cases and 29 deaths, half of them in Greater Hyderabad Municipal Corporation (GHMC), as of May 7.

An isolation ward in the old city of Hyderabad. Photo: PTI

Telangana has conducted 19,278 tests as of April 30, which amounts to 551 tests per million. The number of new cases remained less than 15 per day in the past week, which the doctor’s body attributed to the reduced number of tests.

In a bid to drive its point home, the doctors’ collective informed the visiting team that Suryapet is one of the districts in Telangana with the highest number of COVID-19 cases. But no tests were conducted in the district between April 23 and 29, it pointed out. They also said that Andhra Pradesh, which has reported a surge in cases in the past few weeks, has been testing at a much higher frequency (1,930 tests per million population).

Apart from the allegation of low testing, complaints galore that conditions in isolation facilities are deplorable. Suspected patients and primary contacts of infected persons are quarantined in dormitories and general wards, with common toilets and not in individual rooms. This runs counter to the Kerala model, which recommends that every suspected patient should be isolated in individual rooms so that a probable positive case will not infect the others at the facility.

Doctors in the Gandhi and Niloufer hospitals in Hyderabad, and several other areas of Telangana, have also demanded the supply of personal protection equipment (PPE) such as N95 face masks.

While the government has asked that all COVID-19 patients in Hyderabad should be sent to the Gandhi hospital, healthcare workers in other government hospitals such as the Osmania general hospital or the Government Maternity Hospital have not been given PPEs. Some of the patients visiting these hospitals are reported to be asymptomatic COVID-19 patients, putting the staff there at risk of getting infected. Health experts observed that these hospitals may become new epicentres if the healthcare personnel are not provided PPE.

The state’s health minister Etela Rajender, in a media briefing a few days ago, defended the ongoing testing process. He said the government is conducting tests according to the ICMR’s guidelines, which say only those showing symptoms of COVID-19 should be tested. 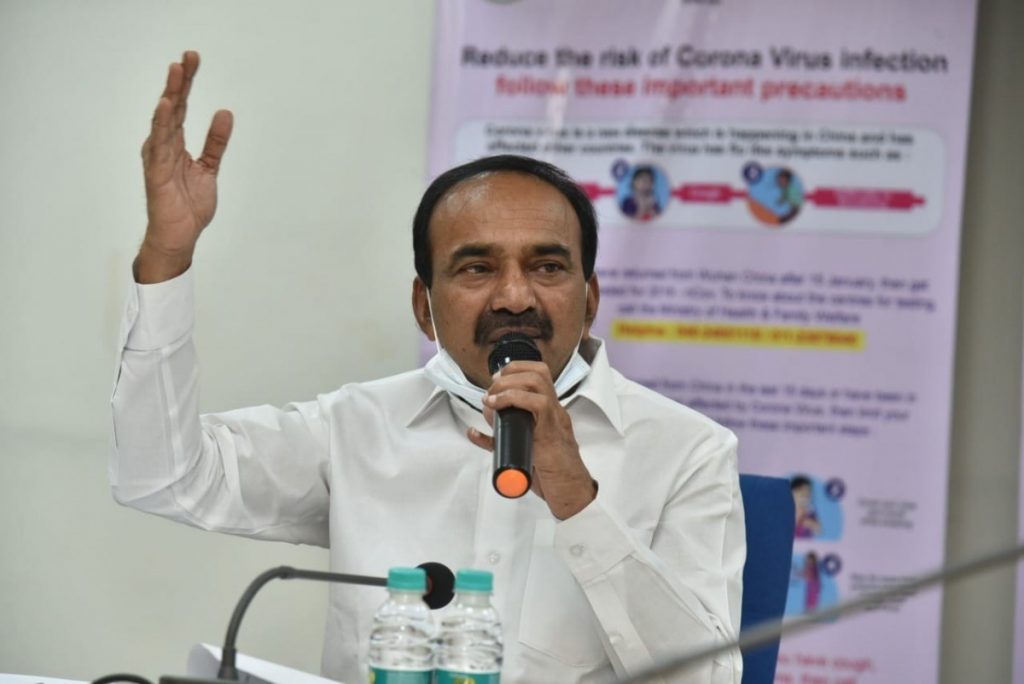 A Hyderabad-based analyst, wishing to stay anonymous, told The Wire that the underreporting of COVID-19 cases is a calculated political move by the Telangana chief minister to scuttle the BJP’s plans to polarise the situation along communal lines. The state has a large Muslim population, and like in other states, BJP leaders have tried to blame the spread of the virus only on those who attended the Tablighi Jamaat religious gathering. Recently, KCR had criticised those making polarising statements, saying no action will be taken against those who attended the Jamaat.