Why Households Are Being Excluded From Modi's Swachh Bharat Scheme

In villages where the number of households as per the baseline survey is less than the actual households, the toilet building exercise poses an allocation challenge: Who gets the limited number of toilets? 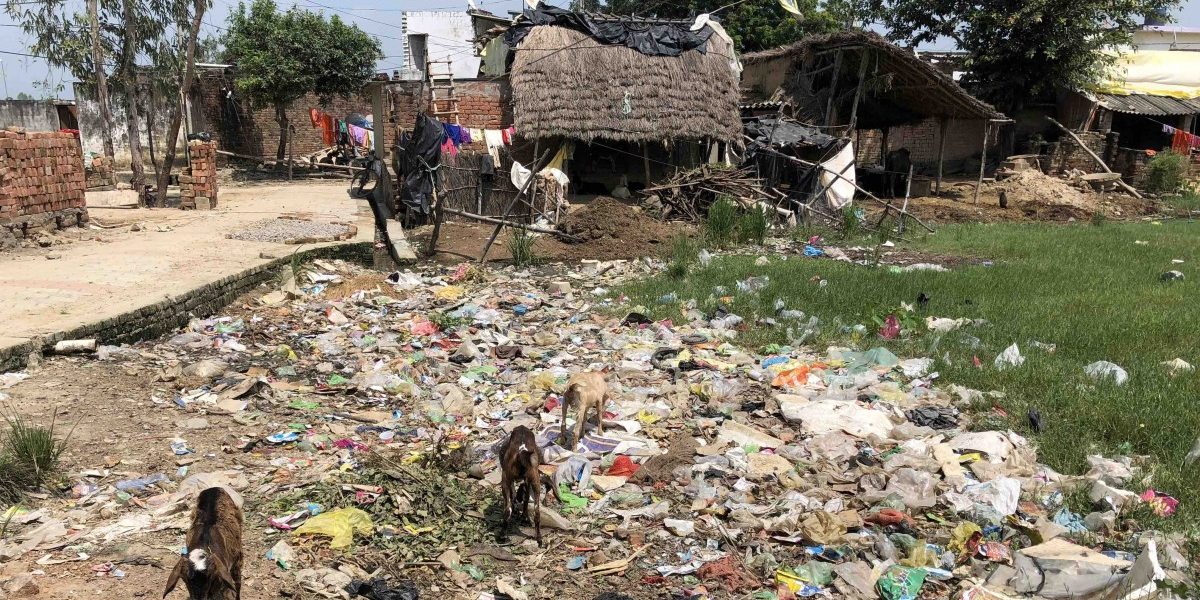 The Uttar Pradesh government has now decided that they will conduct surveys in each district with the aim of including households that had been left out by the 2012 baseline survey. Credit: Kabir Agarwal

Note: This is part four of a series on Modi government’s Swachh Bharat Mission. Read part one, two and three.

Barabanki/Meerut/Lucknow/Shamli: Usha Devi is 24, belongs to a so-called lower caste. She has five children, the eldest is seven-years-old and the youngest one month. Her husband works as a labourer at a brick kiln earning Rs 250 a day. The family lives in a small ramshackle house in Azizabad, a small village of about 100 households in Barabanki. There is a toilet on their premises, but it remains locked.

“It was built for my father-in-law. He used to live here earlier,” Devi explained. Earlier this year, the father-in-law, along with his wife and two unmarried sons, moved to another part of the village where they don’t have a toilet on their premises. “They come here daily to use the toilet. But they don’t allow us to use it. They lock it after use,” she said.

Devi’s family has not received the Rs 12,000 provided as incentive under the Swachh Bharat Mission (Gramin) to build a toilet. They continue to defecate in the open despite having a toilet on their premises.

In that survey, the family mentioned here would have been counted as one household since they lived together at the time. However, now they live in different dwellings and are separate households. But as far as the SBM (Gramin) is concerned, they remain one household. Usha Devi with three of her children. Credit: Kabir Agarwal

During the course of my reporting, I found several such households which, for a variety of reasons, were not separate households in 2012 and hence are kept out of the Narendra Modi government’s flagship Swachh Bharat Scheme.

For instance, in 2012, Mohammed Farooq used to live with his parents and brothers in their two-room house in Jamalpur – a village in Shamli. He got married to Fatima Bano in 2014 and the couple moved to a one-room dwelling of their own. “My father got a toilet, but I did not,” Farooq said.

Families that moved into a particular village after 2012 are also excluded from the Swachh Bharat Scheme. Another set of people excluded are migrant workers.

“Migrant workers who spend about six months in the village when the brick kilns operate have no access to toilets. They will defecate in the open. Where else will they go? They are not even a part of the list (based on the 2012 baseline survey) that we have sent to the district office,” said the pradhan of a village in Lucknow district.

Almost all the pradhans that I met expressed concern that migrant workers who don’t have houses in the village but stay there for a considerable period of time have been excluded from the SBM.

A senior district official in charge of the SBM implementation in one of the districts that we visited also admitted that lack of toilets for migrant workers is a cause for worry. “Some workers move seasonally. Others move from village to village in search of jobs. They are not a part of the baseline survey. So they don’t get toilets under SBM,” the official said.

The baseline survey itself is unreliable

Over the course of our reporting, we discovered, as academics have in the past, that the baseline survey is not entirely reliable. A large proportion of residents in the villages that we visited claimed that they were not a part of the list of households (based on the baseline survey) prepared by the pradhan, despite having been residents even prior to 2012.

Hetampur is a small village in Barabanki district which has been declared open defecation free. According to SBM (Gramin) database, it has 168 households, each having access to a toilet. However, according to the Census, Hetampur had 194 households in 2011, a year prior to the baseline survey.

Urmila, who we also mentioned in an earlier part of the series, claimed that her family is not a part of the list of households in Hetampur who stand to benefit under SBM. Since the list is drawn from the 2012 baseline survey, exclusion is possible if the family did not live in the village in 2012. However, Urmila and her family have lived in Hetampur for generations. Recently, when the Centre for Policy Research (CPR) studied the sanitation status in 19 villages in Udaipur that had been declared ODF, they concluded, among other things, that there exist inaccuracies in the baseline survey. Officials and gram panchayats told the team conducting the survey that the baseline numbers were compiled ‘in a hurried manner without entirely realising their relevance’.

Block development officers and pradhans told the CPR team that the baseline survey was not authentic because names were repeated, people got left out. ‘It was a random estimate number which is now necessary to be followed’.

The CPR study noted that since the baseline survey forms the basis on which villages are declared ODF, it brings ‘into question the validity of the ODF status’.

In their influential book Where India Goes, Diane Coffey and Dean Spears have also described instances when they met village heads who were in the process of completing the baseline survey for their village. “They were caught in a dilemma: They could not decide whether they should claim that everybody in their village indeed has the latrines that they received funding for under the last sanitation programme or whether they should admit that everyone still defecates in the open, seizing the opportunity to get their hands on a new round of construction funds,” they wrote describing one particular incident.

During the course of my reporting, I also met several pradhans and block development officers who confessed that the baseline survey they filled in was not entirely accurate. “We filled out a number. It was a guess on how many people live in the village. Now it has become a major problem because there are more households in the village than we mentioned in the survey,” said the pradhan of a village in Lucknow.

In villages where the number of households as per the baseline survey is less than the actual households in the village, the toilet building exercise poses an allocation challenge: Who gets the limited number of toilets?

In almost all villages, we found residents who complained that the pradhan favoured those who belonged to his (all the pradhans were men) caste. “Toilets have been built only in that part of the village where the Vermas live,” said a resident in Chinhat, Lucknow.

In many villages, residents said that they did not figure on the list of beneficiaries under SBM prepared by the pradhan because they had not voted for him. “We didn’t vote for him and that is why the entire Yadav community has been overlooked,” said Sanjay Yadav, in Barabanki’s Muradpur.

With the aim of correcting these discrepancies, the Uttar Pradesh government has now decided that they will conduct surveys in each district with the aim of including households that had been left out by the 2012 baseline survey. The process, they claim, will be done by early November.

Avani Kapur, a fellow at the Delhi-based Centre for Policy Research (CPR) and director at the Accountability Initiative, argued that it is positive that the government has recognised that there is a gap and is seeking to correct it. However, she has a word of caution. “If one again does it in a hurried manner we may still miss people especially because it’s festive season. Ideally, we should have stronger monitoring and verifications on a regular basis. We wouldn’t need to keep having costly one-time mapping exercises as the mapping can be done by GPS regularly and then verified by the block sanitation coordinators,” she said.