In 1995, SC Had Shown How the Present Discord Within the EC May Be Resolved

The court's observations in T.N. Seshan, CEC of India v Union of India, on July 14, 1995, show how the CEC can win the confidence of his colleague. 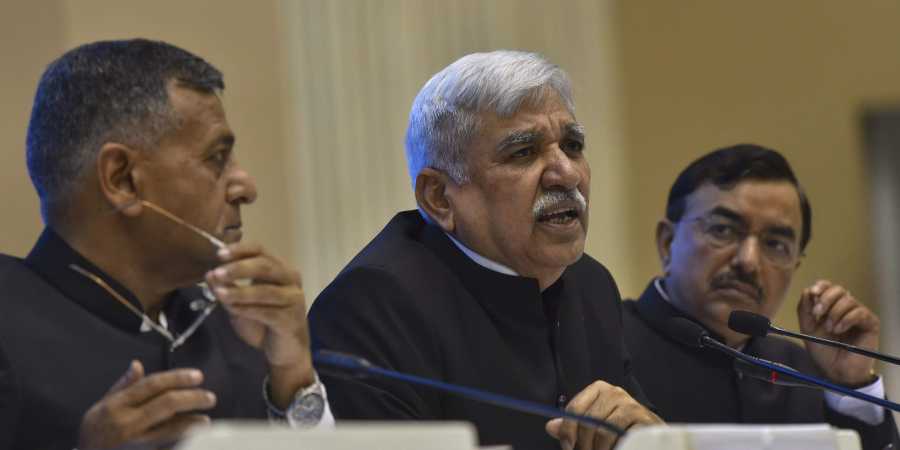 The Wire Analysis
Government
21/May/2019

New Delhi: The ongoing rift in the Election Commission has raised the question whether the three-member body can ignore dissent by one of its members, and present only the majority view as the final decision in any proceeding before it.

While the chief election commissioner, Sunil Arora, sees nothing wrong if the EC does not separately record the dissent in its final decisions, election commissioner Ashok Lavasa has expressed his reservations, and is inclined to boycott the EC’s proceedings to discuss model code of conduct violations, until the EC finds a mechanism to record dissent by one of its members, and along with the majority decision, make it accessible to the public.

The discord within the EC on this issue strikes at the root of the composition of the commission as a multi-member body.   The dissent by one member of the commission during its proceedings cannot be ignored simply on the ground that it is not relevant when the EC functions as an administrative body, and not exercising its powers as a quasi-judicial body.

When the EC was sought to be made as a three-member body for the second time in the early 1990s, the then chief election commissioner, T.N. Seshan, in his inimitable style asked: “Can there be three sub-inspectors in a police station?” Seshan was of the view that three members with equal powers and responsibilities would make them superfluous, especially when the EC, according to him, did not have enough work, which could be shared among them.

“I suffered from gross inadequacy of work when there were no elections to be conducted,” Seshan said in an interview. “If three members are better than one, it can be argued that five are better than three, and where does it stop,” Seshan had asked then.

Seshan’s view is that administrative decisions – in contrast to quasi-judicial decisions of the EC – can better be taken by one person, rather than three. The Supreme Court rejected his contention in T.N. Seshan, the CEC v Union of India, delivered on July 14, 1995.

Seshan’s concern is perhaps justified if one insists that the EC ought to take its administrative decisions by consensus, and where there is none, a stalemate could make the body non-functional. Giving effect to majority decisions, and making public both majority and dissenting views, bring transparency to the functioning of any multi-member body. A single-member body too can be transparent in its functioning by giving reasoned decisions, but a multi-member body, which is entrusted with quasi-judicial functions, cannot distinguish its administrative functions, and argue that the principle of transparency is not applicable to the latter.

The controversy in the Supreme Court over the non-transparent functioning of the chief justice of India in his capacity as the administrative head of the court and as the master of the roster, is one instance of what such a distinction could lead to: decline in credibility and public trust.

Much water has flown since the Seshan era. Today, it is unthinkable for any government at the Centre to reduce the composition of the commission from three members to just one, that is the CEC, although the Centre has that power to do so. It is not the volume of work in the EC, but the manner of its decision-making that necessitates its plural composition, in order to imbue it with democratic character.

Even in terms of volume of work, it is difficult to imagine that an institution like the EC could suffer from inadequacy of work, as it is expected to be in election preparedness all the time – whether it is holding assembly elections in one or more states, or Lok Sabha elections in the entire country, let alone holding by-elections whenever required.

“The concept of plurality is writ large on the face of Article 324, clause (2) whereof clearly envisages a multi-member Election Commission comprising the CEC and one or more ECs.”

“We cannot overlook the fact that when the Constitution-makers provided for a multi-member Election Commission, they were not oblivious of the fact that there may not be agreement on all points, but they must have expected such high ranking functionaries to resolve their differences in a dignified manner.   It is the constitutional duty of all those who are required to carry out certain constitutional functions to ensure the smooth functioning of the machinery without the clash of egos.”

The Supreme Court reasoned that since the other commissioners were not intended to be permanent appointees, they could not be granted the irremovability protection of the CEC, a permanent incumbent, and therefore, they were placed under the protective umbrella of an independent CEC. The court then added this rider:

“The fact that the CEC is a permanent incumbent cannot confer on him a higher status than the ECs for the simple reason that the latter are not intended to be permanent appointees.”

The Supreme Court held that the CEC must so conduct himself at the meetings chaired by him that he is able to win the confidence of his colleagues on the commission and carry them with him.

“This a Chairman man find difficult to achieve if he thinks that others who are members of the Commission are his subordinates.   The functions of the Election Commission are essentially administrative but there are certain adjudicative and legislative functions as well.”

There is nothing in that judgment which can support the view that in administrative matters, (as opposed to quasi-judicial and subordinate legislative matters) the CEC can ignore the dissenting view of a member, as in that event, his colleague may lose his confidence.

“There can be no doubt that the Election Commission discharges a public function….If they (the Election Commissioners) form part of the E.C., it stands to reason to hold that they must have a say in decision-making.   If the CEC is considered to be a superior in the sense that his word is final, he would render the ECs non-functional or ornamental.  Such an intention is difficult to cull out from Article 324 nor can we attribute it to the Constitution-makers.  We must reject the argument that the ECs’ function is only to tender advice to the CEC.”

Refusal to disclose the dissenting view of one election commissioner, needless to say, is likely to make that commissioner non-functional or ornamental. The Supreme Court may not have visualised the rift in the EC as we are witnessing today.  But the solution to it is perhaps available in that judgment.

“In every multi-member commission, it is the quality of leadership of the person heading the body that matters….If they work in cooperation, appreciate and respect each other’s point of view, there would be no difficulty, but if they decide from the outset to pull in opposite directions, they would by their conduct make the Commission unworkable and thus fail the system.”