Court urges Central government to consider revisiting its current vaccine policy to ensure that it withstands scrutiny of Articles 14 and Article 21 of the Constitution. 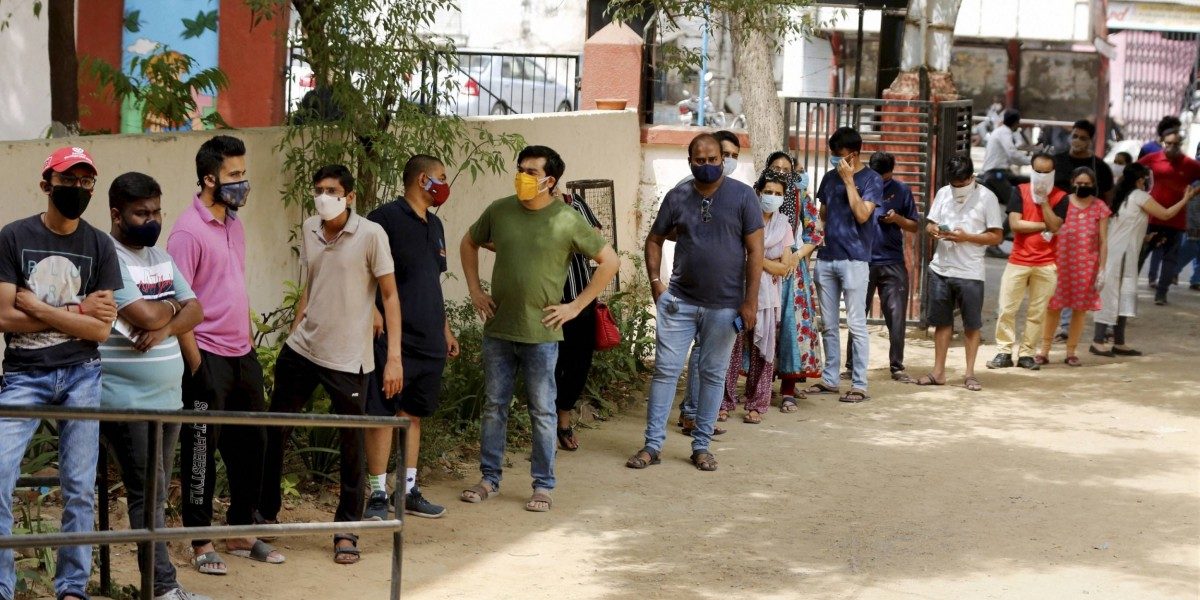 People queue up to receive the dose of COVID-19 vaccine at a vaccination centre in Ahmedabad, Saturday, May 1, 2021. Photo: PTI

New Delhi: The Government of India’s new vaccine policy, published on April 21, expanded the country’s vaccination drive to people older than 18 years from May 1 and introduced the highly controversial differential pricing policy that leaves India’s states, especially poorer ones, staring at a financial conundrum. Now, the Supreme Court has asked the Centre to revise them to be more in line with Articles 14 and 21 of the Indian Constitution.

According to the policy document, the two India-based vaccine-makers, Serum Institute of India (SII) ad Bharat Biotech, would allocate 50% of their production capacity to the Centre at the previously agreed prices. The remaining 50% would be reserved for an “other than Govt. of India” channel comprising state governments and private hospitals. The policy also said the latter could negotiate the companies’ prices for them separately.

This differential pricing entitles those aged 44-60 years to receive their doses at a lower rate from the Centre than from the state. Pharma industry veteran Neeta Sanghi has also explained that since the Centre is the more powerful buyer, both SII and Bharat Biotech are likely to privilege the Centre’s demand first. These issues leave the states at a disadvantage.

A bench of Justices D.Y. Chandrachud, L. Nageswara Rao and S. Ravindra Bhat observed “it is likely that compelling the State Governments to negotiate with manufacturers on the ground of promoting competition and making it attractive for new vaccine manufacturers will result in a serious detriment to those in the age group of 18 to 44 years, who will be vaccinated by the state governments”. The bench further noted that this particular age group comprises many poor people and already marginalised minorities like Bahujans, who “may not have the ability to pay” the elevated prices SII and Bharat Biotech have announced for state governments.

Also read: Centre’s Flawed Vaccination Policy Will Turn States Against Each Other

The apex court bench added that the policy couldn’t discriminate between “different classes of citizens who are similarly circumstanced on the ground” – a message it repeated in the context of some antiviral drugs like remdesivir and tocilizumab being sold on the black market for exorbitant prices. To quote from the order at length:

“Once the vaccination programme has been opened up for persons other than the 45 plus age group, it would not be logical to impose the obligation to source vaccinations for the 18-44 age group on the State Governments. This will, inter alia, leave each State Government to negotiate supply schedules, delivery points and other logistical arrangements with the manufacturers. At present, there are only two manufacturers for the authorised vaccines (with one other vaccine – Sputnik V, in the process of manufacture). The available stock of vaccines is not adequate to deal with the requirements of both the categories. The Central Government must take the responsibility of providing guidance to every State on the quantities to be supplied to each State, the vaccine(s) being allocated, the period of delivery, and the number of persons who can be covered for vaccination, among other details. Leaving the State Governments to negotiate directly with manufacturers will produce chaos and uncertainty.”

According to Article 14, “No person shall be deprived of his life or personal liberty except according to procedure established by la.w. Article 21 of the Constitution states: “The State shall not deny to any person equality before the law or the equal protection of the laws within the territory of India.” Taken together, the bench noted, a more rational way to proceed would be to have the Centre purchase all the doses for all intended age groups and to sell them accordingly to the states – i.e., to paraphrase their words, centralise procurement and decentralise distribution.

“While are not passing a conclusive determination on the constitutionality of the current policy, the manner in which the current policy has been framed would prima facie result in a detriment to the right to public health which is an integral element of Article 21 of the Constitution,” the bench noted.

The court also raised some questions about the wider context in which the policy is to be executed, including whether the Centre considered alternatives to the current policy to ramp up the pace of vaccination and whether decentralised procurement would spur production. It also sought clarification on “whether the current procurement prices” for the Centre “account for infusion of funds for production, infrastructure and other aid provided by it. If so, the basis on which the same benefit is denied to procurement by State Governments which equally service the needs of citizens.”

In a slew of orders on Sunday, the court also directed the Centre to devise a hospital admission policy within two weeks so that healthcare facilities don’t turn away care-seekers arbitrarily. It also asked the Centre to set up decentralised “buffer stocks” of oxygen in addition to existing reserves, and which it tops up regularly, by the night of May 3, with a view to stemming the debilitating crisis in Delhi.

The court assumed suo motu cognisance of India’s COVID-19 response on April 22, a day after the new vaccine policy was published. The bench has asked that its latest order be placed before all district magistrates in the country. The next hearing has been set for May 10.