What Happened to the ‘Strategic Rethink’ of the Railways’ 100% Electrification Policy?

The decision to now officially go with 100% electrification leaves many questions unanswered as to how the funds will be arranged to acquire up to 5,000 additional electric locomotives.

New Delhi: The government’s decision for the cash-strapped Indian Railways to electrify 100% of its network within the next three to four years has raised questions as it will require substantial investment to replace the transport’s existing diesel locomotives and phase out the existing ones in use.

The decision by the Cabinet Committee on Economic Affairs (CCEA) to go ahead with 100% electrification comes six months after Prime Minister Narendra Modi personally raised concerns over railway minister Piyush Goyal’s move to push through with the policy.

As The Wire reported at the time, Modi red-flagged a few issues in a high-level meeting, including apprehensions over the premature idling of “in-service rolling-stock assets from the diesel stable”.

Indeed, the decision to now officially go with 100% electrification leaves many questions unanswered as to how the funds will be arranged to acquire up to 5,000 additional electric locomotives to replace the number of existing diesel locomotives.

Besides this, it’s unclear whether India’s existing power infrastructure is in a position to cater to the increased demand for running electric trains. While India’s electricity deficit has narrowed in recent years, an internal government estimate reckons that electrification of the railways’ remaining routes will spark an additional demand of 2000 MW.

The CCEA this week approved the proposal for electrification of balance un-electrified broad gauge routes comprising of 108 sections covering 13,675 route kilometres (16,540 track kilometres) at a cost of Rs 12,134.50 crore.

However, a report submitted to the railways ministry earlier this year by economist Bibek Debroy – titled “Mission 100% Railway Electrification Need for a Strategic Re-Think” – which collated a set of concerns, has noted that the actual cost of shifting to a 100% electric network could be as high as Rs 1 lakh crore.

This figure includes the cost of route electrification, the costs of acquiring additional electrical locomotives to replace the diesel fleet and the loss of the holding value of the existing diesel locomotive fleet (estimated at Rs 15,000 crore).

The Indian Railways currently has about 5,800 diesel locomotives and about 5,300 electric locos. Diesel traction has over the years helped the national transporter reach areas where electric traction may have been otherwise difficult. States and regions with difficult and hilly terrains such as Jammu and Kashmir, the Northeast and West Rajasthan are examples. 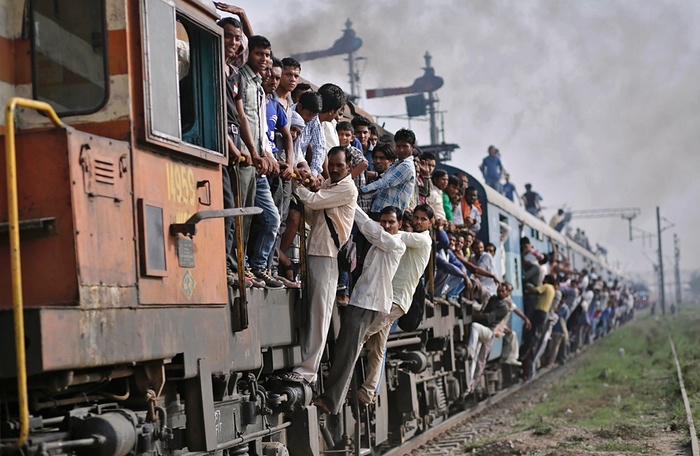 For this expenditure, it is possible that the Indian Railways will be required to raise loans, which will lead to additional interest burden, according to railway analysts The Wire spoke to.

One senior railway official, who did not wish to be quoted for this story, pointed out that 100% electrification is not required at this juncture as it is a capital-intensive work which the national transporter can ill afford. The official believes that there should have been balance between both modes of traction system. “Who will pay for the additional loco cost and what will happen to the condemned locomotives,” the official said. .

Another senior railway official, with knowledge of the issue, told The Wire that major trunk routes and main branch lines should be electrified and rest should be left to diesel locos.

The national transporter’s arguments in favour of 100% electrification ultimately boil down to an assertion that 100% electrification will eventually pay for itself. The ministry notes that the decision will reduce fuel consumption cost by a little over Rs 13,000 crore per annum. It will also lead to other benefits like de-carbonisation of railways, enhancement of railways’ haulage capacity and speed by upgrading to world class electric traction technology and eliminating diesel consumption. The last outcome will reduce demand for crude oil and hence reduce India’s import bill.

In remarks made after the decision, Piyush Goyal explained that diesel engines would not be immediately be condemned but instead could still be used in emergencies and for “strategic use”.

“We will need (diesel) engines for back-up whenever there is any problem in the electric system. We will need diesel engines in the border areas,” he said. “We can look at exporting these engines also. So various opportunities and possibilities are there,” Goyal added, without elaborating further. It is important to note that General Electric in late 2017 raised concerns over the electrification programme in light of its $2.6 billion contract to supply the railways with 1,000 diesel locomotives.

The ministry’s press release also boasts of other advantages including generating “direct employment of about 20.4 crore man days during the period of construction”.

Currently, the transporter plans on giving out larger contracts, instead of trying to financially justify electrification of each individual route, to big companies through engineering procurement and construction (EPC) packages.

However, it remains a fact that ‘Mission Electrification’ is a huge strategic shift, given that for years both diesel and electric traction co-existed. As a result, substantial assets pertaining to these traction technologies have been created over the natural course of time.These include rolling stock, manufacturing factories, maintenance workshops  and a nationwide supply chain ecosystem.

In countries where freight traffic dominates rail traffic – like the US, Canada, Brazil, Australia and New Zealand – the preferred choice is diesel. Other major rail networks such as China/Europe/Russia maintain a mix of both diesel and electric locos.

Emerging regions such as the Middle East and North Africa have dominant share of diesel traction.