Snooping: The IB’s Mandate Has Always Been to Protect India's Rulers from Indians

Founded in 1887 by the British Raj, the Intelligence Bureau has no charter under Indian law and is officially described as "a civilian organisation which does not enjoy police powers".

North Block, on Raisina Hill, home to the Ministry of Home Affairs, and in a warren of offices accessed from the rear of the imposing edifice, the Intelligence Bureau. Credit: Intelligence Bureau publication on the history of the DGPs conferences.

Compulsive public interest litigator ML Sharma can be a pain. But he has on occasion and perhaps by accident been of service to the legal community and it is to be hoped that his Christmas-eve PIL against the MHA surveillance order is taken seriously by the Supreme Court.

The Indian government’s charter to 10 security agencies to snoop on its own citizens is not only illegal and bad in law, it offends the senses. All six of them.

It is a malicious notification that should have been aborted at the very moment of conception. By this government and the previous one.

What is especially worrying, India’s Intelligence Bureau, which tops the list of agencies authorised to snoop into the private communication of citizens, has no charter under Indian law post-independence.

That is a fact, not a claim.

The IB was born not long after the British East India company faced its first great revolt in 1857. Its mandate: to keep the colonial government “fully informed of everything affecting the public peace and order, which can be be made the subject of observation.”

For those who don’t remember,  1857 was bloody – over a 100,000 people died; it was widespread; it started in superstition but eventually spread across caste, class, and religion; and it lasted over a year.

It is known as India’s first war of independence in which a Hindu soldier lit the fire and a Mughal emperor became the rallying figure behind whom everyone was prepared to unite.

The last fact and the brutality of the Siege of Cawnpore led the British empire to dissolve the East India Company and directly take over its colony by the Government of India Act of 1858.

India became an official Crown vassal state and the Queen appointed her first Secretary of State to India.

She also soon became “Empress” of India and her loyal servant, the Right Honourable Richard Asheton 1st Viscount Cross, came to be the 8th Secretary of State on August 3, 1886.

Unlike most of his predecessors who barely lasted months on the job, Cross would flourish in his new position. As Prime Minister Benjamin Disraeli’s home secretary for six years (1874 to 1880), he had been specifically chosen for this job.

Within six months of taking over, Cross wrote a letter, dated March 25, 1887, Secret Dispatch No 11, to the Viceroy’s Camp in India.

He asked that a system be set up for “collection of secret and political intelligence in India.” Specifically, any observation “with particular reference to the expedience of employing especially qualified natives in those parts of the Empire, notably the Punjab and Hyderabad, which are exceptionally exposed to political intrigues or dangers.” 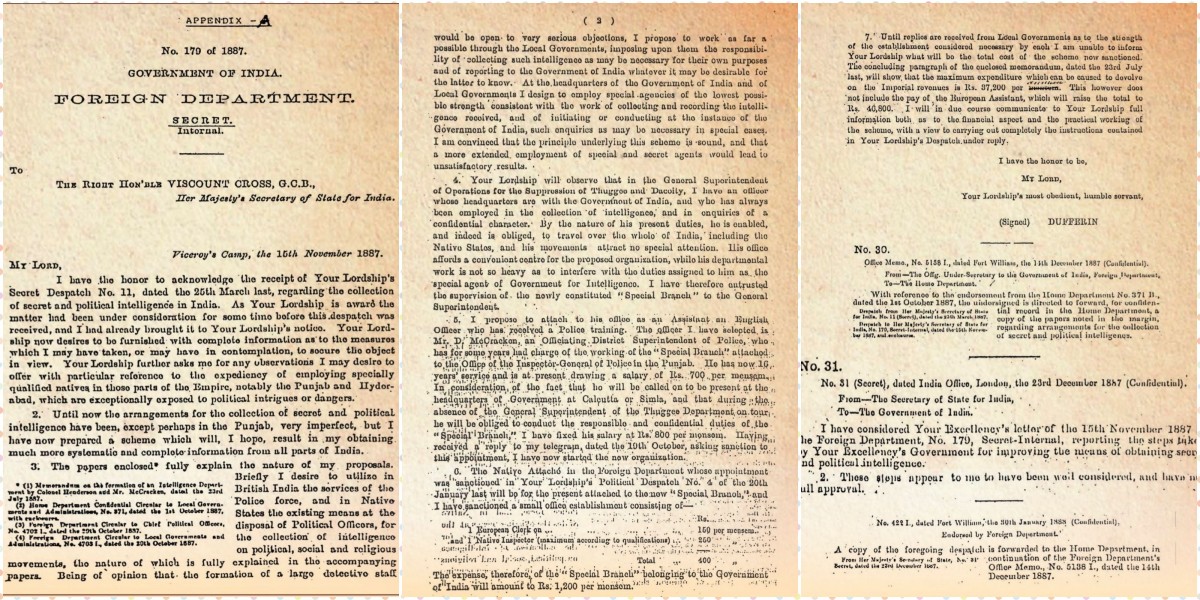 The Viceroy of India at the time was the much-traveled Frederick Hamilton-Temple-Blackwood, also known as the first Marques of Dufferin.

He’d come from Egypt and Lebanon, would move from India to Canada, his end would be ignominiously ignoble as his mining company would dissolve in a cheating scandal, but he would remain forever beloved. A British Columbia island would be named after him.

On November 15, 1887, though, Dufferin wrote back to Cross saying he had come up with a scheme to collect Intelligence on the natives 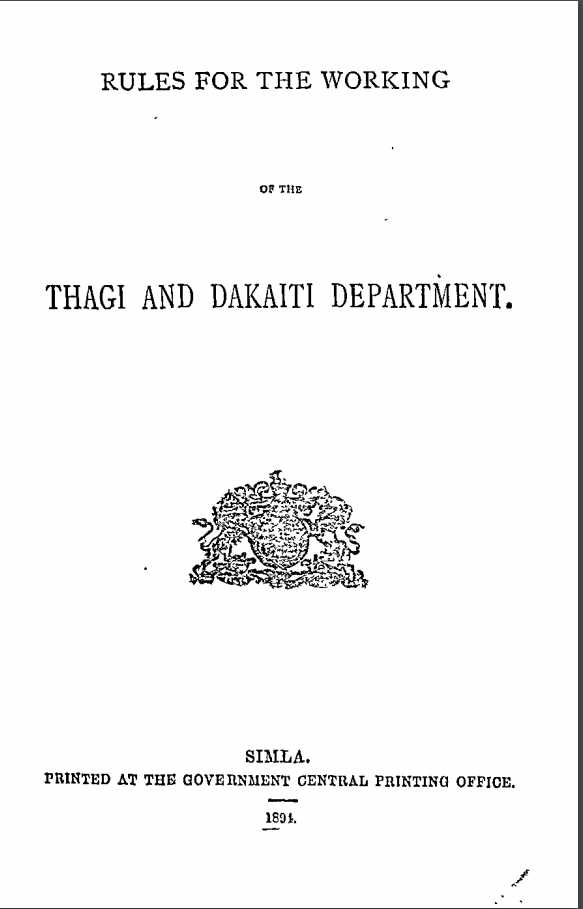 Rules for the Working of of the Thagi and Dakaiti Department, 1894.

Dufferin enclosed copies of reports from two officers – Colonel Henderson and D.E. McCracken. The plan was two-fold, based on the kind of territories in India at the time.

(a) In British controlled provinces, Dufferin planned to use the services of the police force.

(b) In native ruled princely states, he planned to use “the existing means at the disposal of Political Offices, for the collection of intelligence on political, social and religious movements¸ the nature of which is fully explained in the accompanying papers.”

Dufferin believed that Indians would object to the creation of a large British detective force stomping all over the place.

Besides, it would defeat the very purpose of stealth. His plan was to ask local governments to collect intelligence for their own purpose and report relevant information to the Government of India.

Dufferin planned to have the fewest possible of his own men at the local and central level to receive and analyse this information.

And where necessary to inquire and act on it.

Remarkably, this continues to be the Intelligence Bureau structure and mandate.

To be entirely specific, the Intelligence Bureau’s mandate is:

– To collect intelligence on political, social and religious movements in the country on behalf of the state. Translation : For the party in power at the centre.  The subject group includes all politicians of all political parties, dissident political and non-political groups (violent or non-violent)  and religious groups that the state wants to keep an eye on.

In today’s English, the IB’s formal and legal mandate is Oppo Research, Spying on Dissidents and Profiling.

How does it do that? A complicated structure of information gathering, evaluation and action have been in place for the last century.

Briefly, this is how it works:

The Central IB has its own units in various states called Subsidiary IBs. In the British Era these were called the Provincial Special Branch. This is a lean staff. It works largely through the local police and State Intelligence branches (not to be confused with the Subsidiary IB)

The distinction between the Subsidiary IBs and the State IBs is important.

Subsidiary IBs report to the Centre while State IBs report to the State government.  If the political parties in power are different at both places, trouble can ensue. Especially given the vicious political environment in which the country has been operating in the last two decades

Since there is no legal mandate anyway for the Intelligence Bureau and no oversight – intelligence sharing and information withholding, depends entirely on a system of back channels.  An attempt to pass a security services bill in 2011 actually tried to formalize the back-channel sytem as a “security measure.”

State IB reporting to Party B, may not be able to share information with SubIBs or with each other,  if they are not alliance partners. Or if the alliance has soured. The souring of relations between AP and Centre is a case in point. To complicate matters,  Andhra may want to spy on Telangana or vice versa. Or Bihar way want to spy on Orissa.

After all, a significant part of the intelligence agenda is political by mandate.

But if all this is so obviously murky and stupid and a real dingbat idea, how and why does it happen at all?

Surely, there is someone in 70 years of Independence who saw through this whole scam, came to power and said this should stop? After all, no one stays in power in all the states, all the time.

The party that wields an intelligence bureau today, knows that it will be at the receiving end of it a few years later. So why does this go on?

In 1888, when McCracken became the first director of the Intelligence Bureau in India he was officially the assistant general superintendent, Thagi and Dakaiti Department.

From this vantage point, he would frequent the lavish living rooms of kings, viceroys, nizams and maharajas with as much ease as he roamed the backrooms of dingy police stations.

In People’s Maharaja the authorised biography of Amrinder Singh, Khushwant Singh makes a passing mention of McCracken as a tale-tattler and gossip monger, writing to a deputy secretary about the Maharaja of Patiala’s private marriage to the Irish Florry Bryan.

This is pretty much how the IB has continued to function post Independence.

The British era Thagi and Dakaiti department has been replaced by anti-Naxal departments, the anti-terrorist cells, the anti-smuggling departments, counter-intelligence department, anti-FICN department etc. Basically, any department you might notice with extraordinary legal powers that necessarily abrogate Schedule III of the constitution.

Since the Indian social system, of which the judicial system is but a part, is quick to chuck its fundamental rights and freedoms in the gutter at the mere mention of a possible physical threat – fear is the key. If a real cause for fear does not exist, manufacturing fear is really easy.

But the story doesn’t end there. While McCracken was answering to his British masters, a good question to ask is: Who does the IB answer to today?

Technically, it is listed as answerable to the Minister of Home Affairs. But – and this is true – “there is no act of the Indian parliament nor executive order relating to the functioning of the IB.” None.

Despite a budget of Rs 1500 crores, this organisation is not a legal entity under Indian law. Worse, this is not unknown to the judiciary.

In 2012, a former IB officer filed a PIL, asking the organisation to explain its constitutional or statutory sanction. Senior IB Officer RN Kulkarni told the court, “all that the IB has to explain for its evolution over the past 125 years is the British order issued in 1887. Neither the Indian Independence nor the adoption of a Constitution nor even regulatory statutes for Central police organisations like the CRPF and CISF ever accorded any legal status to the IB, which exists in a constitutional vacuum.”

When the court asked the Centre to explain its position, it responded saying:

“the IB is a civilian organisation which does not enjoy police powers.”

The retired IB Officer, R.N. Kulkarni, went on to write a book called Sins of National Conscience, which is not available at any bookstore.

In 2015, in the Priya Pillai lookout notice case, counsel for the Greenpeace activist Indira Jaising successfully argued that the IB had no authority to issue a LO circular. Justice Rajiv Shakdher found merit in Jaising’s argument that a home ministry’s office memo of 2010 was not a valid legal mandate and ruled it “unsustainable, as it cannot be described as law.”

In 2017-2018, the home ministry continued to acknowledge the lack of legal mandate for IB when the 8 PPMDS and 26 PMMS medals for the IB had to be categorised under the Union Home Ministry, instead of a legal intelligence body.

Yet, this hasn’t deterred intelligence officials from pursuing their own mandate. In 2012, the same year as India celebrated its 65th Independence anniversary, the Intelligence Bureau celebrated its 125th year of founding. It even brought out a special issue to mark the occasion.

The IB sees itself as coming from an older tradition than Independent India. At its very core, it pays homage to a set of values that are not compatible with the idea of freedom and liberty. In its very founding, history and traditions, it is anti-freedom.

How could it be different? It was founded to suppress voices against empire.

A hundred and twenty-five years of traditions of empire – whichever one they choose to serve for the moment – may modernise such organisations. But no amount of time changes the essentially status quoist nature of such organisations with such a strong culture.

To give private organisations with no police authority overt sweeping powers to snoop and surveil citizens of India is to enter Gulag territory.

Yes, we always knew some people were always under surveillance. Yes, having nothing to hide is a good thing. But no this isn’t as small an issue as everyone want to believe it is.

In an era when criticism can get you thrown into jail on charges of sedition or under the National Security Act; when the system of checks and balances has failed; when the social contract does not exist; then all free thought is a possible trespass. Because freedom itself is a violation of the status quo.

Sarita Rani is a journalist