ROC filings for 2020-21 note that Eightall Food and Beverage bought and sold food and alcohol, and that the company’s aims include operating a restaurant.

Smriti Irani. In the background is a photo of the Silly Souls eatery in Goa. Photos: PTI and official Facebook page.

New Delhi: Smriti Irani, minister for women and child development in the Narendra Modi government, may have been economical with the truth when she told the Delhi high court that neither she nor her daughter own or run the Silly Souls Café and Bar in Goa – the controversial restaurant summoned by the state’s excise authorities to explain how it applied for and obtained a liquor license in the name of a dead man.

What she hid from the high court – despite stating on oath that she had not concealed “any material fact, document or record” relevant to the suit –  is that:

(1) the controversial bar and restaurant operates from the very same address – House No. 452, Bouta Vaddo, Assagao – from which a company controlled by her husband and family, Eightall Food and Beverage, conducts its primary business;

(2) the GST number allotted to the Irani family company at the Assagao address is identical to the GST number which the Silly Souls Cafe and Bar has filed with restaurant aggregator websites, as The Wire has established;

(3) balance sheets and profit/loss statements filed by the Irani family company for the financial year ending March 31, 2021 and obtained by The Wire show that the company spent money purchasing “material and alcohol” and food during the year, sold food and alcohol, and noted the value of its food and alcohol inventory – which strongly indicates that the business of Eightall Food and Beverage includes the sale of liquor, for which a license is required by law. One of the stated aims of the company is to “operate restaurants”. 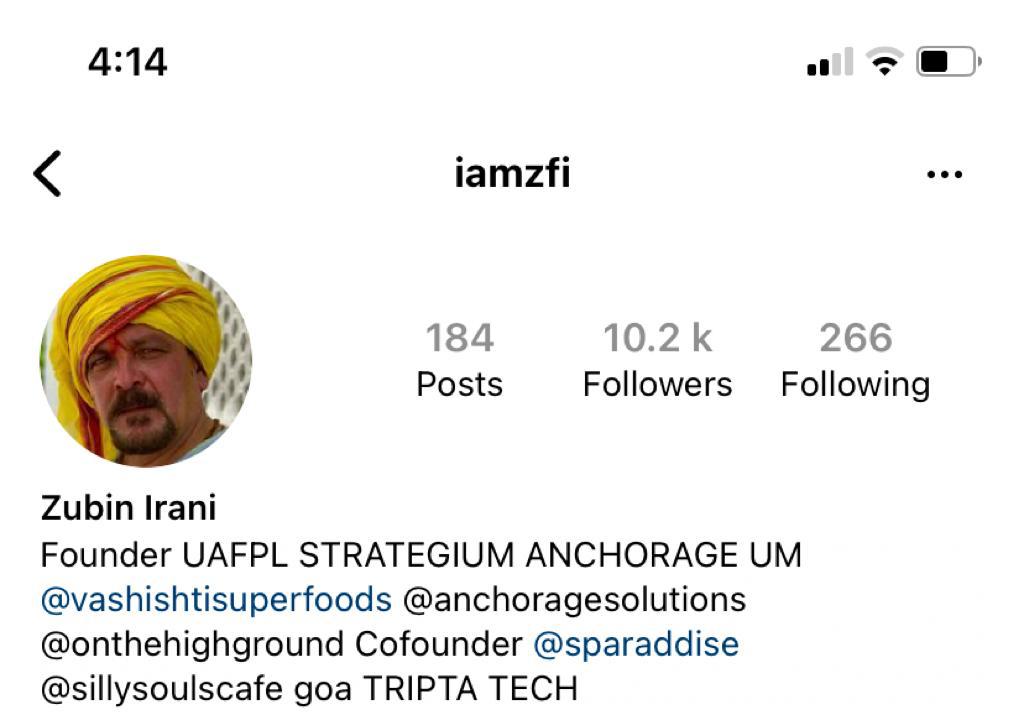 There is, in addition, evidence from Zubin Irani’s Instagram account – which Smriti Irani follows – where he includes “co-founder @sillysoulscafe Goa” as part of his biographical details. And an interview that Zoish Irani, the 18-year-old daughter of Smriti Irani, gave to the well-known food critic Kunal Vijayakar in which she nods in assent when he asks her if the Silly Souls restaurant is hers. “Let me introduce you to a very, very young entrepreneur,” Vijaykar says. “This is Zoish Irani. Correct? This is your restaurant?” And Zoish Irani says, “Yeah” and nods.

All of these facts suggest that the Silly Souls Cafe and Bar is likely either owned, or operated, by EFAB, the limited liability partnership company that Zubin Irani and other members of the Irani family, including the minister’s son, own a 75% stake in, via two family owned companies, Ugraya Mercantile and Ugraya Agro.

What the records show

According to records with the Registrar of Companies, the other owners of Eightall Food and Beverage (EFAB) LLP are Geeta Vajani, Harsh Khaneja and Kanika Seth. 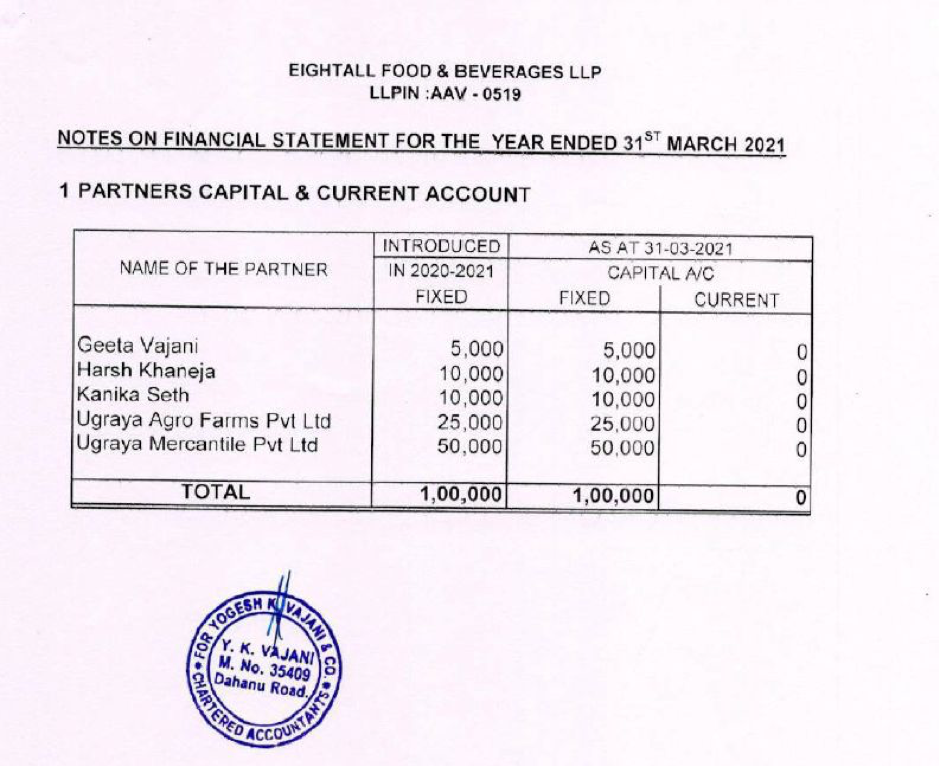 Over the past week, The Wire has sent questionnaires to each of these owners, including Zubin Irani in his capacity as the controlling owner of Ugraya Mercantile and Ugraya Agro, seeking to understand the nature of EFAB’s operations at the Assagao location and its relationship with the Silly Souls Cafe and Bar, Goa. These questions have remained unanswered. Last week, a detailed set of questions were also posed to Smriti Irani via email and Twitter, but these too were unacknowledged and unanswered. As and when she, or any of the actual EFAB stakeholders reply, their responses will be incorporated in an updated version of this story.

Liquor license in the name of a dead man

The entire controversy began on July 21 when Herald Goa published a story based on an RTI response received by lawyer and activist Aires Rodrigues which alleged that the state excise department had illegally renewed the excise licence of Silly Souls Bar and Cafe. The website claimed the restaurant was linked to Smriti Irani’s family but provided no further details. It noted that the liquor license had been issued in the name of one Anthony D’Gama, who had died a year ago. The story also mentioned that the Goa excise department had on February 18, 2021, issued a liquor licence to the Silly Souls Goa Cafe and Bar (SSCB) from its premises in Assagoa without SSCB submitting a valid licence to run the restaurant, as required by the law.

Also read: Smriti Irani’s Family Restaurant in Goa in the Eye of a Storm

On Rodrigues’ complaint, the Goa excise commissioner issued a show-cause notice in the name of the restaurant, following which the Congress party launched a scathing attack on Smriti Irani.

The minister held a press conference where she denied the allegations but took no questions. She then filed a petition in the Delhi high court alleging that Congress leaders Pawan Khera, Jairam Ramesh and others had defamed her. Justice Mini Pushkarna held that she was of the “prima facie view that slanderous allegations were made against [Smriti Irani] without verifying actual facts”, that she and her daughter were not the owners or operators of Silly Souls, and that the ‘defamatory’ tweets and others social media posts made by the Congress leaders be deleted within 24 hours.

It is not clear how the court would have dealt with Smriti Irani’s petition if it had been informed of the multiple connections Smriti Irani’s husband had, via his family owned companies, to a business operating from the very address where Silly Souls Cafe and Bar is located, that the two entities use the same GST number and that the business of the Irani family firm includes the purchase of alcohol.

The story of Eightall LLP

On January 18, 2021, Eightall Food and Beverages LLP registered itself with a GST number in Goa, and GST No. 30AAIFE7039H1ZM was allotted to it to operate from House No.452, Bouta Waddo, Assagao, Goa. Another link we found was that the email ID for contact on the Facebook page of the Silly Souls Cafe and Bar is info@eight-all.com.

The Wire used its sources in a popular restaurant aggregator platform to inquire into the GST number that Silly Souls had listed with it since the D’Gama family, in its reply to the Goa excise commissioner’s notice, has claimed that it owns and runs the cafe and bar. The D’Gama family had earlier run a homestay from the same address but a GST search for the two names the family had registered with the state authorities – The D’Gamas and D’Gamas Lux – drew a blank. A Goa government list of 19,287 “taxpayers with turnover less than Rs. 1.5 Cr falling under the jurisdiction of the State” also does not include the D’Gamas or their homestay.

The restaurant aggregator source confirmed that Silly Souls Goa Cafe and Bar had listed its GST No. as 30AAIFE7039H1ZM – which is identical to that of Eightall Food and Beverage – and had placed a copy of the registration certificate with that number on file with the aggregator. 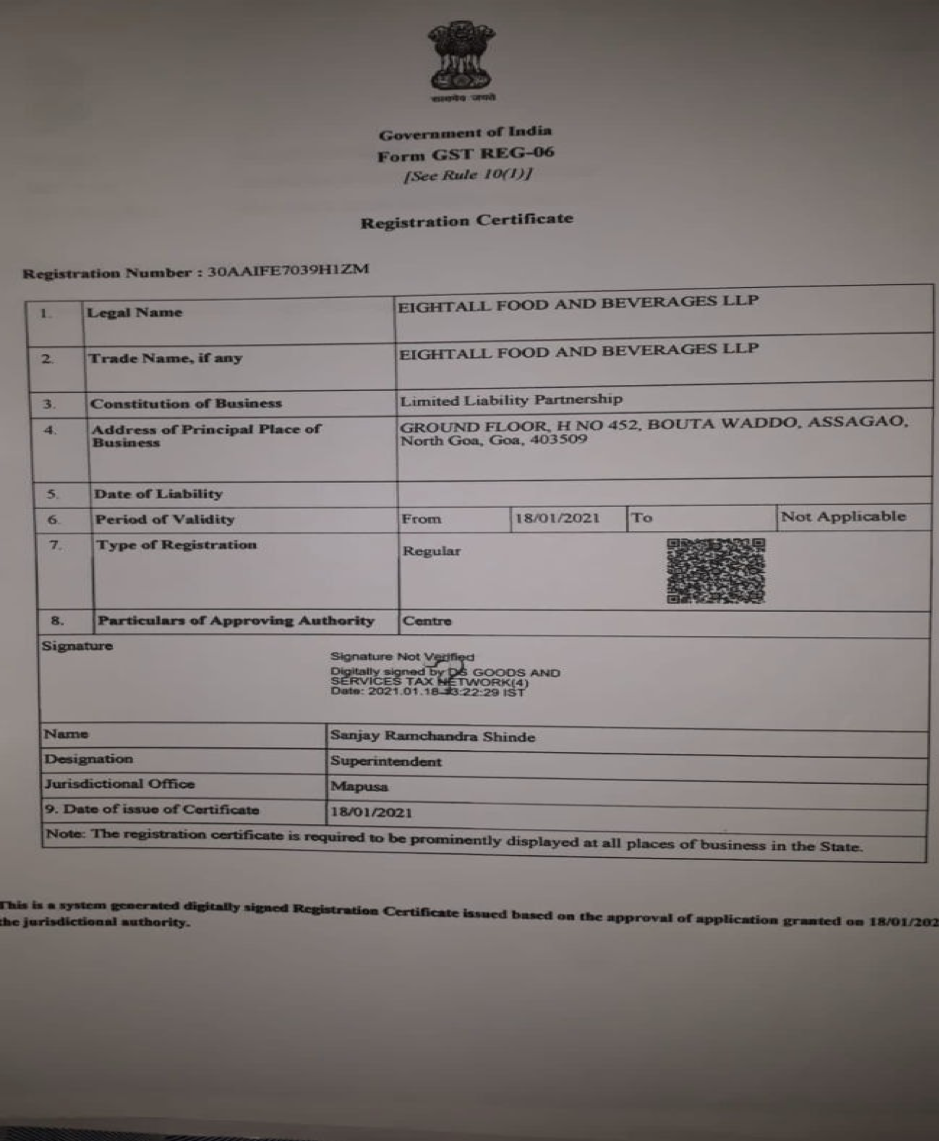 Who are these people and companies behind Eightall – the company that owns the restaurant?

As per the Ministry of Corporate Affairs Director Master Data, Zubin Faredoon Irani is a director in Ugraya Agro Farms Pvt Ltd, and Ugraya Mercantile Pvt Ltd. Form 1 (for the declaration of assets and liabilities) filed by Smriti Irani says that her Husband Zubin Faredoon Irani owns shares in both these companies. Earlier, his holding as per her 2018 declaration, amounted to 95% of each company’s shares. Her 2021 filing shows her husband still owns 67% of both companies. The balance 33% is split equally between their three children, Shanelle Irani, Zohr Irani and Zoish Irani, according to the Indian Express. 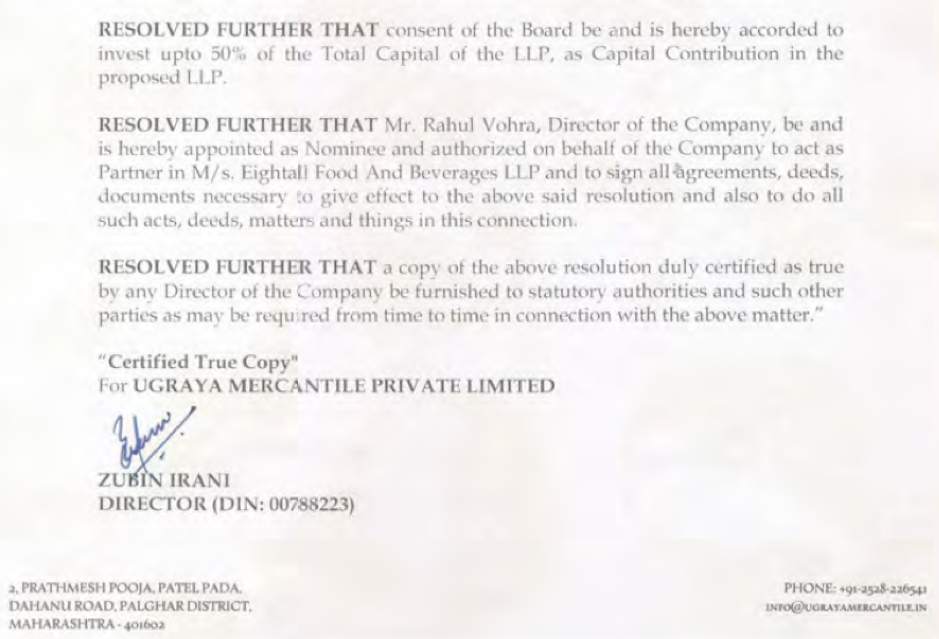 Ugraya Agro Farms Pvt Ltd resolved to invest 25% share capital in Eighall and authorised Mangesh Gangaram Joshi, a director in many of the companies of Zubin Irani, as its DP Nominee.

If we explain this in the simplest form, Zubin Irani and his children, who own Ugraya Agro Farms Pvt Ltd and Ugraya Mercantile Pvt Ltd, own 75% shares of Eightall Food and Beverages LLP, which is operating what looks like a restaurant business (judging from its filings) at the same location as the Silly Souls Goa Cafe and Bar, which uses the same GST number as Eightall.

We checked the last available balance sheet of Eightall and confirmed what was mentioned in the two board resolutions. As of March 31, 2021, the two Ugraya companies hold 75% shares of the LLP. The then partners, Harsh Khaneja and Kanika Seth, held 10% each, and Geeta Yogesh Vajani owned the balance 5% shares (see Image 2 above).

On June 1, 2021, Kanika Seth exited, and on November 15, 2021, Harsh Khaneja also put in his resignation from Eightall. On November 30, 2021, another company, Taronish Hospitality Pvt Ltd, which shares the same official address as Eightall Food and Beverages LLP, passed a board resolution to pick up a 20% stake in Eightall. Mangesh Gangaram Joshi and Yogesh Kantilal Vajani were the directors of Taronish. Mangesh Joshi authorised Yogesh Vajani as the DP nominee and signed the resolution.

Yogesh Kantilal Vajani is a chartered accountant, and it is in his office address that both these companies are registered.

Aries Rodrigues, the lawyer whose RTI inquiries triggered the ongoing controversy, told The Wire that at the excise hearing on the bar licence granted to Silly Souls Goa Bar and Cafe on July 29, the lawyer for the D’Gama family submitted that the owner of the property from where the restaurant and bar operates is the legal owner of the bar, not Eightall.

But Eightall’s filings with the RoC show a different picture. The Profit and Loss account of the company mentions that it spent nearly Rs 13 lakh as the cost of materials and alcohol purchased. If Eightall doesn’t own the bar but only the restaurant, why did it spend such a huge amount to purchase alcohol and food? 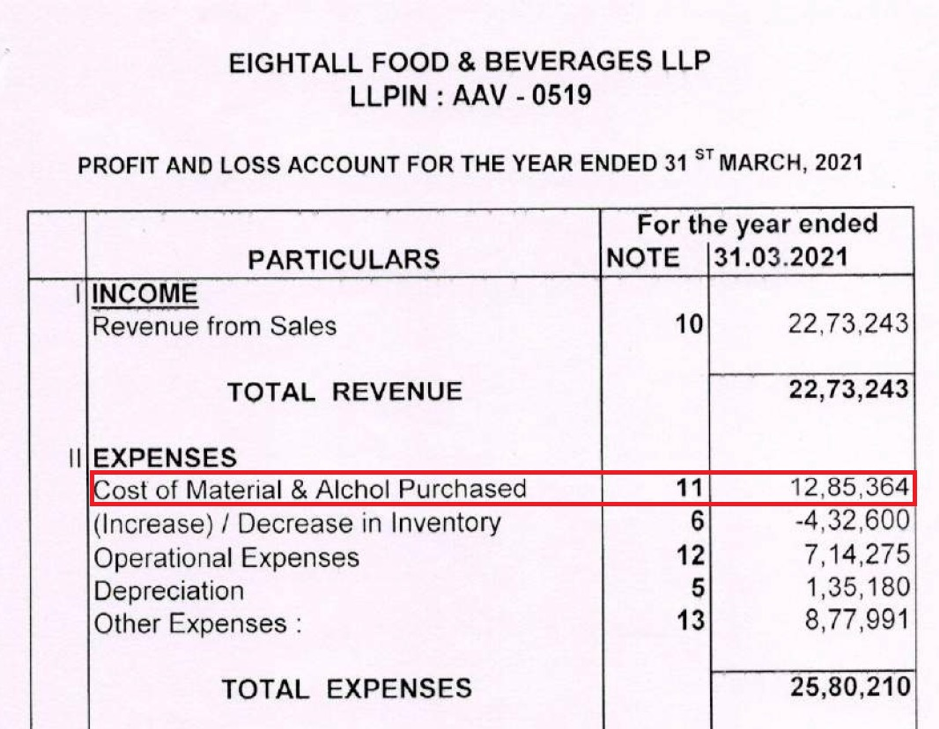 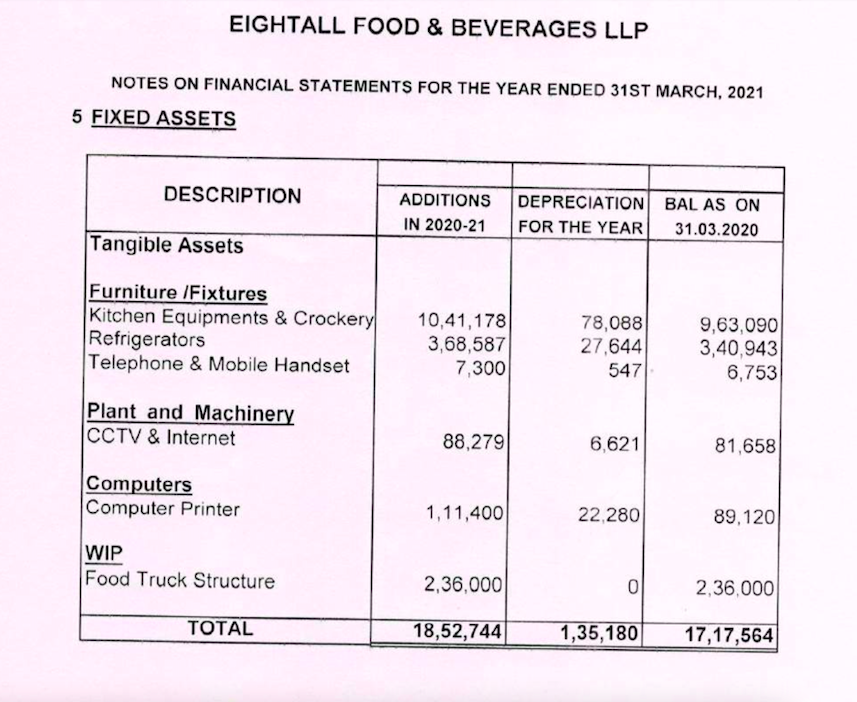 Eightall’s ‘notes on financial statements for the year ended March 31, 2021’ include kitchen equipment, refrigerators and a ‘food truck structure’ among other things.

Another issue related to this is that if Dean D’Gama, son of late Anthony D’Gama, is the owner of the bar licence, Eightall can’t use it for its business. As per Rule 90 of the Goa Excise Duty Act, 1964, “A licence granted under Rule 90 to an individual or an association of individuals such as a firm and a legal person such as a company is purely personal and is not transferable.”

The Wire attempted to reach Dean D’Gama to clarify these issues but like the Iranis, he also did not respond to our calls, messages and emails.