'There is every apprehension that any such public statement made by Dr Shah Faesal could lead to unrest or disturbance in public order.'

Faesal had topped the 2010 IAS exams. He is a doctor by qualification. Photo: Twitter

Srinagar: Among the charges listed out against bureaucrat-turned-politician Shah Faesal – who was recently booked under the Public Safety Act (PSA) after having been detained since August 15 – is his “support for soft separatism” through social media posts.

The young politician was booked under the stringent PSA on February 14, the day his six-month preventive detention ended. Under the controversial law, a person can be jailed without trial for up to two years.

“The subject advocates the idea of soft separatism through his articles, tweets and social media posts, which on several occasions have attracted response, amounting to a potential threat to public order.”

It talks about “apprehensions” that if he released, any statement that Faesal would make could lead to unrest in the Valley. It further says:

“The security situation is improved in Kashmir Valley and routine life [has] returned to normalcy. However on many recent occasions several rumours were spread leading to tense situation[s] and further divisional administration had to issue clarification on such incidents. In this backdrop there is every apprehension that any such public statement made by Dr Shah Faesal could lead to unrest or disturbance in public order which the law enforcement agencies fear as a cause of concern for maintenance of public order.” 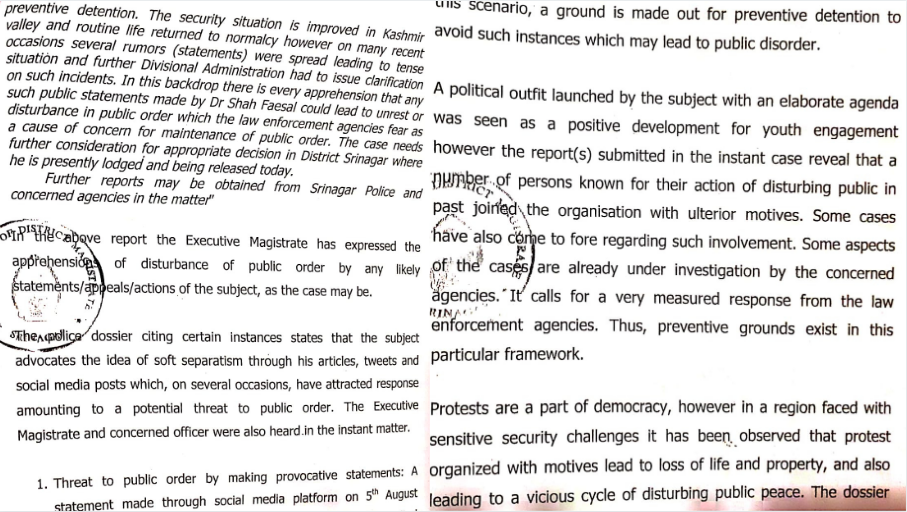 Faesal’s decision to launch his own political party – Jammu and Kashmir People’s Movement – and alleged association with a “number of persons” who joined the party with “ulterior motives” is cited in the dossier.

“A political party launched by the subject with an elaborate agenda was seen as a positive development for youth engagement. However, the reports submitted in the instant case reveal that a number of persons known for their actions of disturbing public in the past joined the organisation with ulterior motives. Some cases have also come to fore regarding such involvement. Some aspects of the cases are already under investigation by the concerned agencies and it calls for a very measured response from the enforcement agencies.”

Referring to a statement made by Faesal on social media on August 5, the dossier terms him a threat to public order as the remarks were allegedly provocative.

Everyone is heartbroken. A sense of defeat written on every face. Fall.
From citizens to subjects.
History has taken a catastrophic turn for all of us.
People are numb.
A people whose land, identity, history, was stolen, in broad day light.

From the Lolab Valley of the frontier district of Kupwara, Faesal had topped the 2010 IAS exams. Immediately, he was projected as a youth icon and hailed as a role model figure for Kashmiris. He, however, quit the services in January last year to “protest against unabated killing in Kashmir and lack of any sincere reach out from the Union government.”

Two months later, he launched his own party, the JKPM, with which he hoped to find a solution to the Kashmir problem within the ambit of the constitution of India and electoral politics.

His party operated under the slogan, ‘Hawa badlegi’ (‘winds will change’).

Though Faesal, a doctor by qualification, had a considerable following on social media, his opponents, including leaders of the National Conference, had often described him as a “proxy of New Delhi,” who had allegedly been sent to divide the people of Kashmir.

On August 13 last year, Faesal took to Twitter to express his views on the reading down of Article 370. “Kashmir will need a long, sustained, non-violent mass movement for restoration of the political rights,” he wrote.

In an interview with BBC, Faesal later said: “I’m not going to be a stooge….This new phase of insult, this new phase of indignation has begun on August 5, 2019 and it is my generation which has now got the taste of the betrayal and I don’t know how this is going to play out.”

President of @jkpmparty, @shahfaesal, tells @stephensackur that the Kashmiri constitution has been “murdered” by Indian Prime Minister Modi’s decision to end the semi-autonomous status of #JammuKashmir pic.twitter.com/3lTbv3r0VM

He was detained at the Delhi airport on August 15 as he tried to board a flight and was sent back to Srinagar and put under detention. Faesal had been bound for Istanbul when he was stopped from boarding the flight, according to the PTI report of the time.

Faesal has become the eighth politician from Kashmir to be booked under the PSA, which has been described as “lawless law” by the Amnesty International.

A report by J&K Coalition of Civil Society (J&KCCS) and Association of Persons of Disappeared Persons (APDP) in December last year said that more than 400 persons, mostly youth, were booked under the PSA in Kashmir post August 5, following a massive clampdown by the authorities in anticipation of protests against the Centre’s Article 370 decision.