After MP Minister Threatens Sabyasachi With Action for Mangalsutra Ad, Company Withdraws it

Narottam Mishra said that if the "objectionable and obscene advertisement" is not withdrawn withdrawn in 24 hours, action would be taken against the jeweller. The ad has now been withdrawn. New Delhi: After targeting Dabur’s Karwa Chauth ad, Madhya Pradesh home minister Narottam Mishra on Sunday issued a 24-hour “ultimatum” to designer Sabyasachi Mukherjee to withdraw an advertisement about a new line of jewellery, including a mangalsutra. The minister said the advertisement is ‘obscene and objectionable’.

Soon after the threat, the company decided to withdraw the ad. “In the context of making heritage and culture a dynamic conversation, the Mangalsutra campaign aimed to talk about inclusivity and empowerment. The campaign was intended as a celebration and we are deeply saddened that it has instead offended a section of our society. So we at Sabyasachi have decided to withdraw the campaign,” the company said in a statement 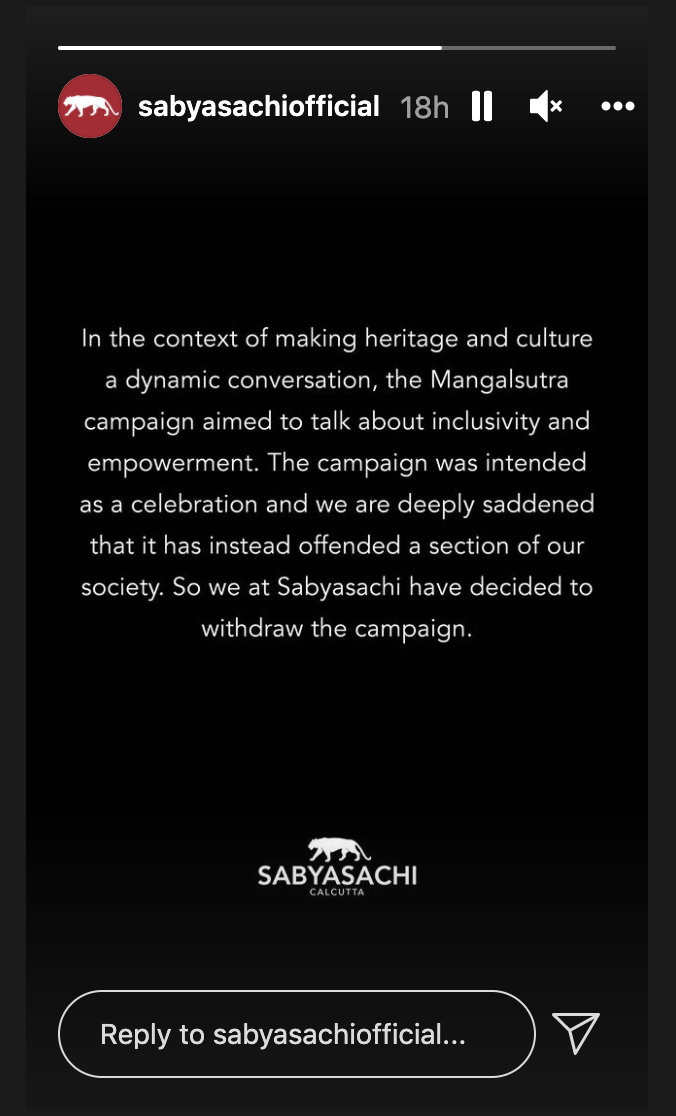 Last week, Dabur India Private Limited had withdrawn its Fem cream bleach advertisement, which showed a same-sex couple celebrating Karwa Chauth and watching each other through a sieve. The move came after Mishra termed the ad “objectionable” and warned that legal steps would be taken against it.

Now, advertisements for a mangalsutra by Sabyasachi’s brand have become a target. While there are a number of photos that have been released for the campaign, two photos that portray a woman wearing a brassiere, one in which she is posing solo and another in which she is with a man who is topless, seem to have caused outrage on social media. Users termed it “against Hindu culture”, describing it as obscene. 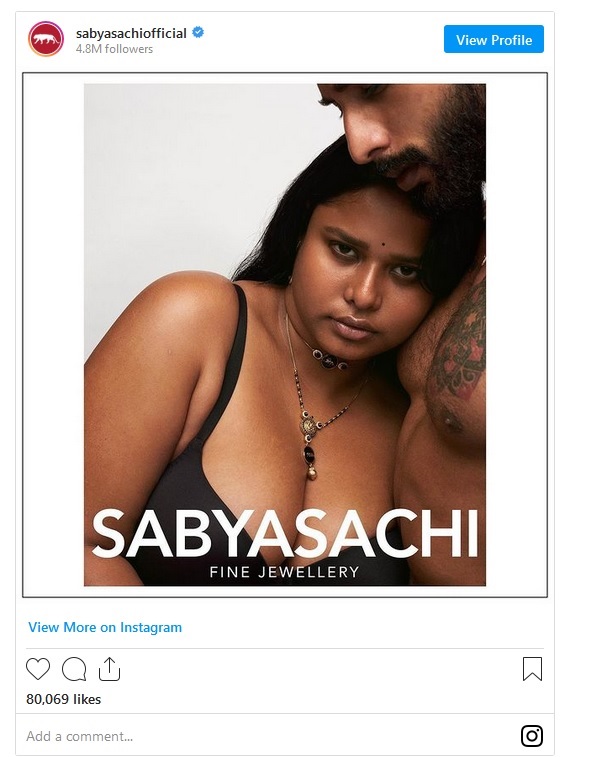 A screenshot of Sabyasachi’s ad on Instagram. Photo: sabyasachiofficial/Instagram

Talking to reporters at Datia in Madhya Pradesh, minister Mishra said, “I have warned earlier about such advertisements. I am personally warning designer Sabyasachi Mukherjee, giving him a 24-hour ultimatum. If this objectionable and obscene advertisement is not withdrawn, then a case will be registered against him and legal action will be taken. The police force will be sent for the action.”

“It is very objectionable. Mangalsutra is a piece of jewellery of paramount importance. We believe that the yellow part of the mangalsutra signifies Goddess Parvati and the black part Lord Shiva, which protects the woman and her husband. Marital life becomes happy by the grace of Goddess Parvati,” he said.

According to Indian Express, a legal advisor for the BJP issued a notice to the fashion designer on Saturday. “I say that in your promotional social media posts featuring models posing solo or in intimate positions with others. In one picture, a female model is seen wearing a black brassiere and Sabyasachi’s mangalsutra as her head rests on a shirtless male model is totally outrageous to the entire Hindu community as well as Hindu Marriage,” the notice read.

Note: This article was originally published on October 31, 2021 and updated and republished on November 1, 2021 with Sabyasachi’s statement removing the ad.