The minister withheld information given to him by the J&K tourism department, which contradicted the Modi government’s narrative of normalcy 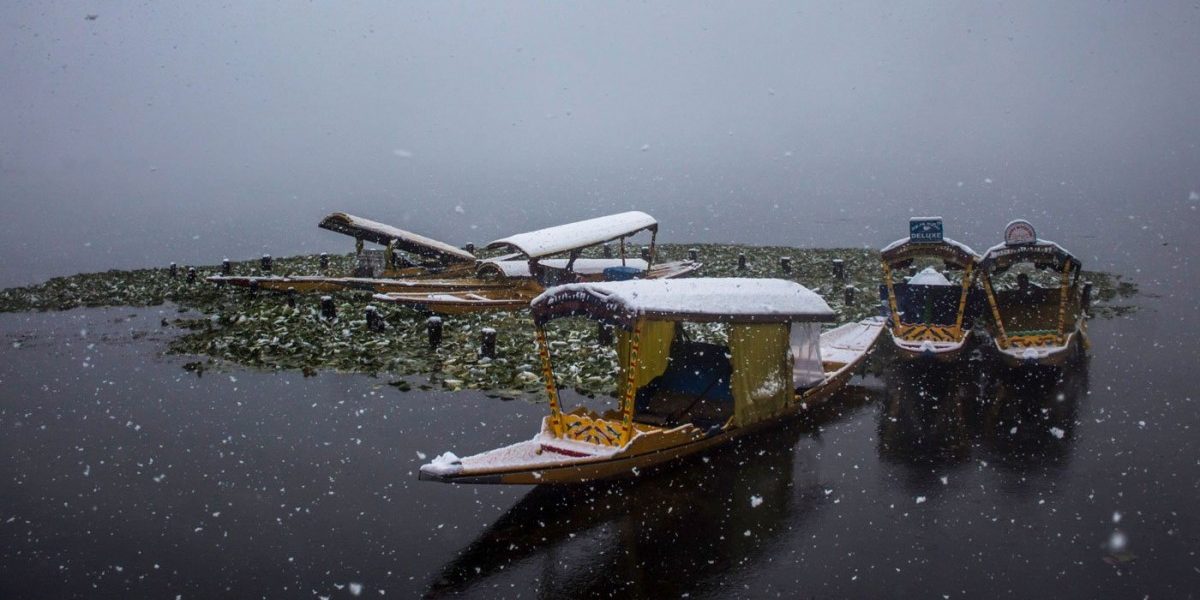 New Delhi: On November 19, 2019, Union minister for tourism Prahlad Singh Patel told parliament that, effectively, there wasn’t any significant impact on tourism in Jammu & Kashmir (J&K) on account of his government’s scrapping of Article 370 in August, and the prolonged lockdown, restrictions and detentions in the region since then.

The minister’s statement, in response to a question from Rajya Sabha MP Elamaram Kareem of the Communist Party of India (Marxist), flew in the face of the extensive shutdown experienced in the Valley from August onwards, and numerous journalistic reports on how not just tourism, but the wider economy had been devastated by the government’s moves.

This included the suspension of the Amarnath Yatra, and an order issued on August 2, 2019 asking all tourists to leave the Kashmir Valley, which the government kept in place until October 9, 2019. The government’s blackout of the internet in the Valley has lasted for 150 days now – the longest in any democracy. 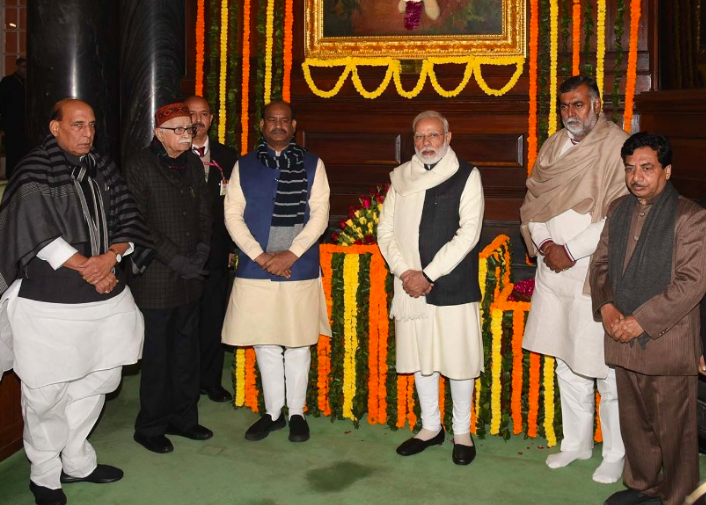 Now information provided by the Ministry of Tourism in response to a RTI request filed by us reveals that the minister had in fact concealed crucial information provided to him by the J&K tourism department, which stated that tourism had “sharply declined.” In his response, Patel also told Parliament an outright lie – that there was no data on decline in tourism revenues.

The Ministry of Tourism sent Kareem’s questions to the J&K Tourism Department on November 14, 2019 and received a written response the following day in the form of a note.

That note, which the ministry in turn provided us as part of its response to our RTI query, is perhaps the first official acknowledgement in the public domain of the adverse economic impacts of the government’s moves in the Valley. But it also provides clinching proof of the fact that the minister lied to parliament when he answered Kareem’s questions.

>Kareem’s ‘Unstarred Question No 319’ asked multiple questions on the impact of the lockdown on tourism in J&K. The first of which was:

(a) Whether the recent developments have affected the tourism in Jammu and Kashmir and details thereof.

Here is how the J&K tourism department had answered this question, while sending its responses on November15,  2019 to Patel’s Ministry:

“Yes sir. After issuance of security advisory by the Government of Jammu and Kashmir on 02.08.2019, sharp decline of tourist arrival has been witnessed. The tourist related infrastructure viz Hotels, Huts, Guest houses Paying Guest Houses and Houseboats got abruptly shut and the occupancy came to a very low level. The communications disruptions became one of the hiccups to restore the flow of tourists in Jammu and Kashmir which continued till restoration of the mobile services followed by withdrawal of the Security Advisory by the Govt on 09.10.2019.”

The tourism department’s response thus officially contradicted the narrative of ‘normalcy’, which has been spun by the Modi government since August.

But Patel simply omitted this section, while responding to Kareem’s questions in Parliament. 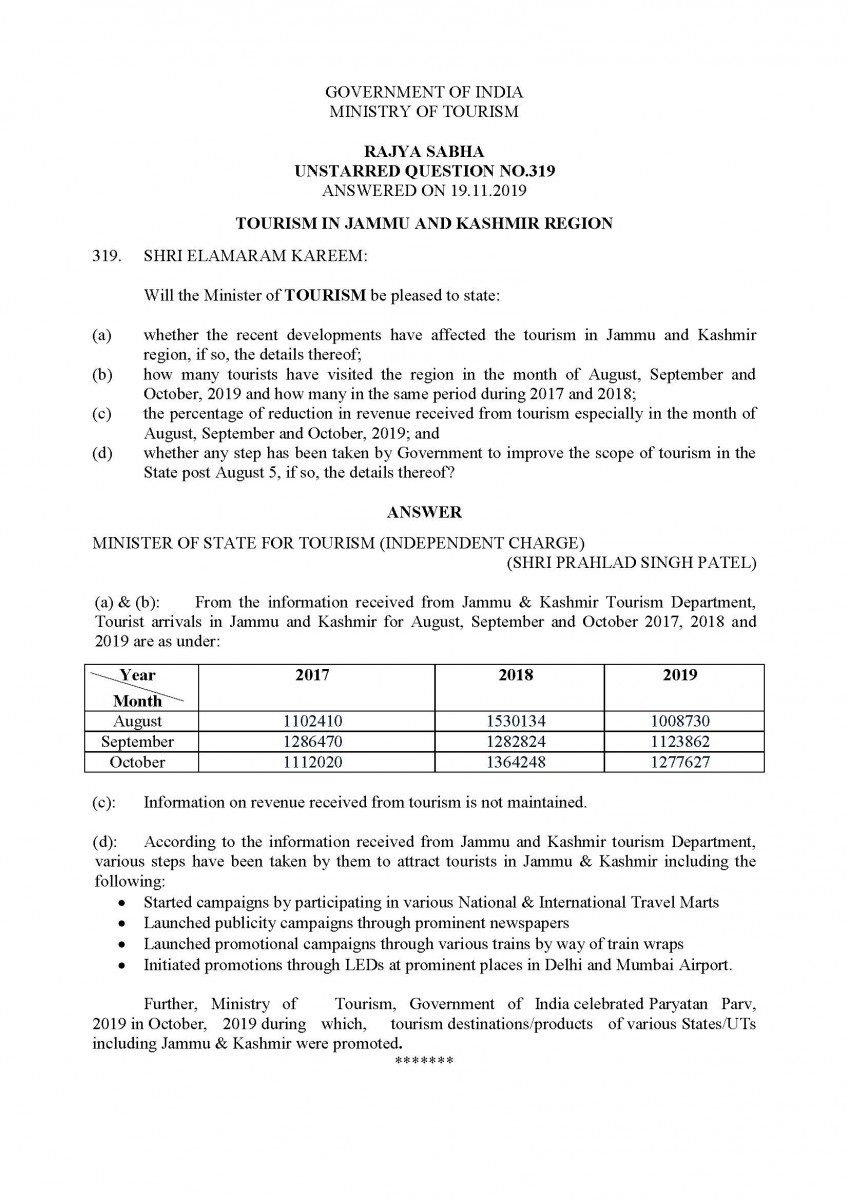 How Patel answered Kareem’s question in Parliament on November 19, 2019. 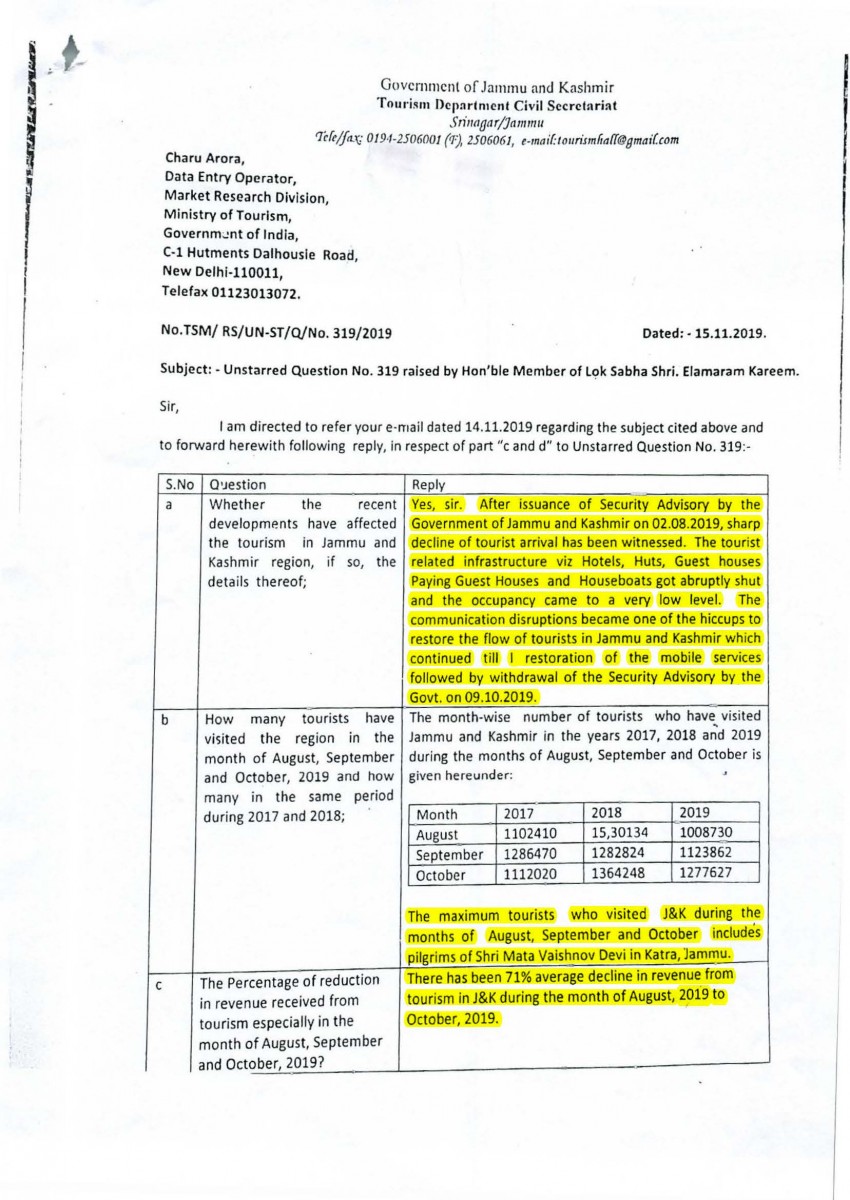 How the J&K tourism department had responded to the questions in a note to the Tourism Ministry on 15 November 2019 (right).

(b) how many tourists have visited the region in the month of August, September and October 2019, and how many in the same period during 2017 and 2018.

The minister conveniently clubbed (a) and (b) and gave a consolidated answer in which he provided the total figures for the entire former state, as given to him by the J&K tourism department. He thus did not provide Parliament a break-up of how many tourists visited Kashmir specifically, where the lockdown has been the harshest.

But in providing the above figures, he withheld the following crucial caveat given to his Ministry by the tourism department:

“The maximum tourists who visited J&K during the months of August, September and October includes pilgrims of Sri Mata Vaishno Devi in Jammu.”

Finally, Kareem had also asked for:

(c) The percentage of reduction in revenue received from tourism especially in the month of August, September and October 2019.

“The information on revenue received from tourism is not maintained.”

The J&K Tourism Department note that was sent to the Ministry of Tourism and provided to us  under RTI reveals that Patel stated an outright lie. He had in fact had been provided with the following specific figures by the tourism department:

We sent an email questionnaire on the morning of January 1 to Patel’s office and the secretary of the tourism ministry, asking why the minister had withheld the above information from parliament. We have not received a response, and the story will be updated when they do so.

When we informed Kareem about the discrepancies revealed by the RTI request, he said, “Even when the response was given, it seemed like a big lie. Now [the RTI] shows that the government is openly lying to Parliament and the people. I am going to file a privilege motion.”

Former secretary general of the Lok Sabha P.D.T. Achary said that this was a fit case for a breach of privilege motion since “deliberately concealing information amounts to lying to Parliament. It is inexcusable.”

“Answering questions of MPs is not a mere formality,” Achary said. “Flowing from Article 75 of the Constitution, the Council of Ministers is collectively responsible to the legislature, and therefore ministers are required to answer all questions fully and correctly.”

“Modi and Shah’s BJP are doing all it takes to ruin many of India’s hallowed institutions. This is just one example of their chicanery,” said Derek O’Brien, member of the Parliamentary Standing Committee on Transport, Culture and Tourism and the All India Trinamool Congress Party’s parliamentary leader in the Rajya Sabha. “They mock parliament, distorting facts, peddling lies and ignoring precedents.” 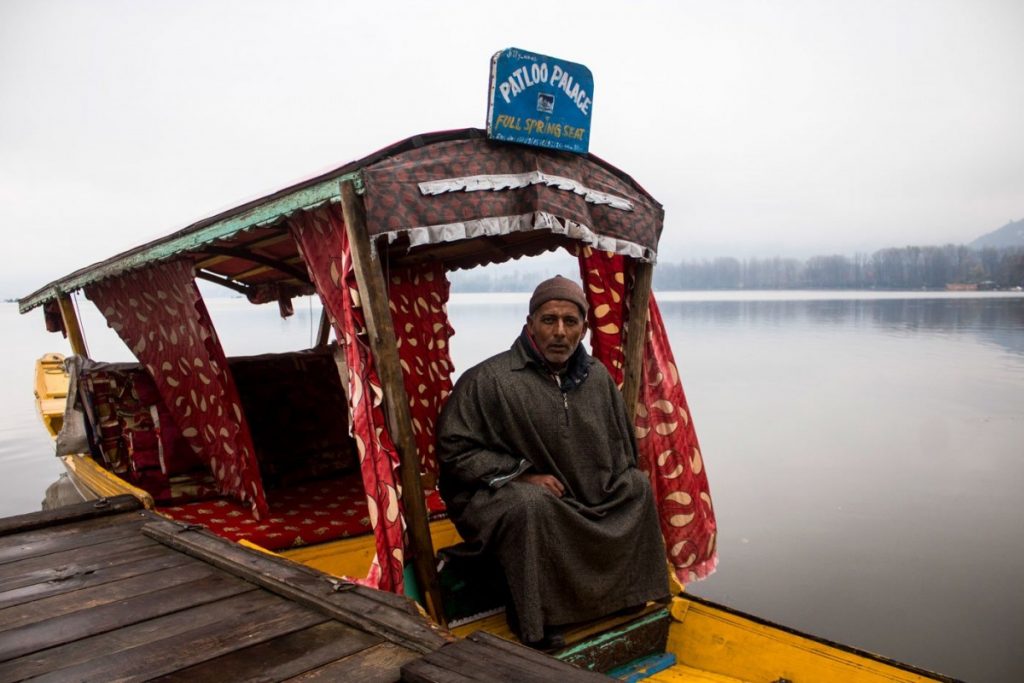 “I have not got a single ride since August, after the government’s advisory to the tourists to leave the Valley. All I have is this shikara business,” Mehraj-Ud-Din Paktoo said. “And I have three children and their education [to look after]. I don’t know how I will survive this winter because what we earn in season is what we use in winter”. Photo: Muzamil Bhat/People’s Archive of Rural India

Sheikh Ashiq, the President of the Kashmir Chamber of Commerce & Industry, which has put the losses to J&K’s economy since August at over 15,000 crore rupees told that he estimated a 90% decline in tourism and livelihoods linked to it.

He said, “Right now places like Gulmarg, Pahalgam would be booked through winter. They are mostly empty. Thousands of families who depend on the tourism industry and related sectors like handicrafts for their livelihood have been made to sit idle since August.”

“It is a well-known fact that things are in a bad state in Kashmir, despite the government claiming that everything is normal,” said Kareem. Ashiq said, “In today’s day and age, how do you expect tourists to travel to a place where you have suspended the Internet, and put so many restrictions?”

Aniket Aga is an academic. Chitrangada Choudhury is a journalist and researcher.