Even as the opposition has suggested that there is a link between the Modi degree row and the passing of the RTI Amendment Bill, the government managed to get another adjournment in the DU degree case. 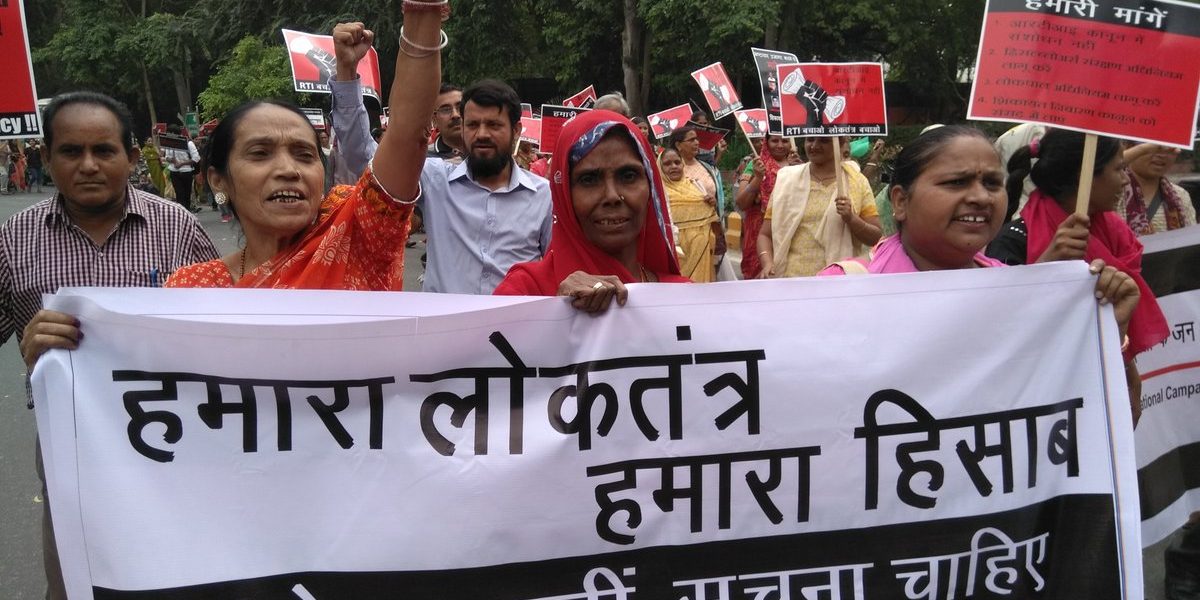 File photo of people from more than a dozen states joined the protest march against proposed amendments to the RTI Act. Credit: Twitter/@AnjaliB_

New Delhi: On a day when the Rajya Sabha passed the RTI Amendment Bill, 2019 despite strong opposition from RTI activists who call it an attack on the transparency movement by the Narendra Modi government, there were actually not one but two victories for the prime minister.

And in the Delhi high court, through government counsels, the centrally-managed Delhi University got yet another adjournment in a plea filed by it against a 2016 CIC order by M. Sridhar Acharyulu which allowed inspection of the Bachelor of Arts results of 1978 – the year Modi claims to have graduated from Delhi University.

While many opposition leaders and RTI activists believe that a primary reason for the Modi government to crack the whip on CIC was to restrict the flow of such information, a look at the manner in which the case has dragged in the Delhi high court for over two-and-a-half years gives credence to such belief.

During the debate in Rajya Sabha on July 25, two senior Congress leaders – Abhishek Manu Singhvi and Jairam Ramesh – spoke directly about this link. Singhvi referred to Acharyulu’s order in the degree case, saying he issued the order that “related to the age of the highest executive of this country, the hon. prime minister.”

Also read: Over 30,000 RTI Appeals and Complaints Are Pending Before the Information Commission

“Shortly, thereafter,” though, Singvi added, “the HRD segment of Mr. Acharyulu’s jurisdiction was taken away from him. This is the disclosure which came about the age. There are other disclosures about degrees. Now, is that the reason the Government wants to control such institutions?”

Jairam Ramesh too saw a motive behind the amendment. He said, “There are five cases which have propelled the government to bring forward these amendments”, adding that the first was that “the CIC ordered disclosure of the prime minister’s educational qualification; the matter is in the Delhi high court today, as I speak, or maybe it has already been heard today. This is the first embarrassing case for this government.”

During the debate several other opposition members also referred to the degree case.

In his order of December 21, 2016, CIC M. Sridhar Acharyulu allowed inspection of Delhi University’s 1978 BA degree records. Hearing the RTI application of activist, Neeraj, he overturned the DU central public information officer’s (CPIO) decision to deny the sought information on the ground that it would invade the privacy of students and that the information “has no relationship to any public activity or interest”.

The CIC held that the university could not provide any evidence or explain how such information causes any “invasion of privacy”.

Delhi University challenged the CIC’s 2016 order in the Delhi high court. It claimed that the order violated the RTI Act’s provision pertaining to privacy (Section 8(1)(j)) and that that it was in possession of the information being sought in a fiduciary capacity under section 8(1)(e) of the Act.

Appearing for it, Additional Solicitor General Tushar Mehta and standing counsel for the central government, Arun Bhardwaj, submitted that the CIC order had “far-reaching adverse consequences for the petitioner and all universities in the country, which hold degrees of crores of students in a fiduciary capacity”.

Since then the case has not made much progress.

On April 27, 2017, Justice Sanjeev Sachdeva of the Delhi High Court adjourned the matter for four weeks saying “learned counsel for the petitioner prays for time to file rejoinder affidavit.” He ordered listing of the matter over six month later saying “renotify on 16-11-2017”.

However, the University of Delhi did not utilise this time to file any rejoinder.

Three to six month adjournments have been a norm

On November 16, 2017 the matter was listed before Justice Vibhu Bakhru. He wrote that “a request for an adjournment is made on behalf of the learned counsel for the petitioner. It is also seen that the petitioner has not filed its rejoinder despite sufficient time. Accordingly, its right to do so stands closed.” But the matter got further delayed by three months and was listed on February 28, 2018.

On February 28, 2018, the matter came before Justice Rajiv Shakdher, who issued the notice in the case and ordered that “reply, if any, be filed within three weeks” and listed the matter for May 22, 2018.

On May 4, 2018 Justice Shakdher issued another order to “issue notice to the non-applicants/ respondents”. He directed that “reply, if any, be filed before the next date of hearing”, which remained May 22.

ASG’s absence, ‘paucity of time’ among reasons for adjournments

On May 22, 2018, the matter was adjourned for another three months. Justice Shakdher in his order said: “The matter was passed over, once, when Mr Tushar Mehta, learned ASG (Additional Solicitor Genera), was not available”.

On August 23, 2018, Justice Shakdher adjourned the case by another five-and-a-half months. He wrote: “It is already 5:05 p.m. The matter cannot be taken up due to paucity of time”.

Judge wanted to look at related provision of law, moved out before next hearing

On February 4, 2019 the matter came up for hearing before Justice Anup Jairam Bhambhani. Taking up a clutch of five similar petitions, he noted that “In all these matters, the main question that arises for consideration is as regards the interpretation of Section 8(1)(e) and 8(1)(j) of the Right to Information Act, 2005.”

Stating that “the information sought in these cases relates to the results of examinations, details of such results, educational qualifications and other related matters pertaining to students,” Justice Bhambhani ordered that “while considering the interpretation of the aforesaid two statutory provisions, the court will also look at other related provisions of law, as may be relevant and material for the decision.”

Also read: Amending the RTI Act Is About Cutting Troublesome Citizens Down to Size

He then listed the matter for final arguments on April 23, 2019 and directed that pleadings in these matters be completed within six weeks, wherever not already done so.

On April 23, 2019 the case, however, did not land before Justice Bhambhani who was to “look at other related provisions of law” but came up before Justice V. Kameshwar Rao.

Justice Rao noted that “request for adjournment is made on the ground that Mr Tushar Mehta, learned SG is out of station”. He directed that the matter be listed three months later on July 25, 2019. This was the period when the Lok Sabha elections took place.

So, the University of Delhi succeeded in ensuring that the case stayed in abeyance till after the polls.

On July 25, when the matter came up for hearing before Justice Rao, an ASG told the court that SG Tushar Mehta was busy and sought an adjournment. After this, the matter was adjourned till November 28.

Note: In an earlier version of this story, the ASG in the last paragraph was erroneously identified as Madhavi Divan. Ms Divan has informed The Wire that she has not been briefed on this case and never went to the high court that day.