In conversation with Paswan on the challenges faced by his ministry, delays in food distribution and more. 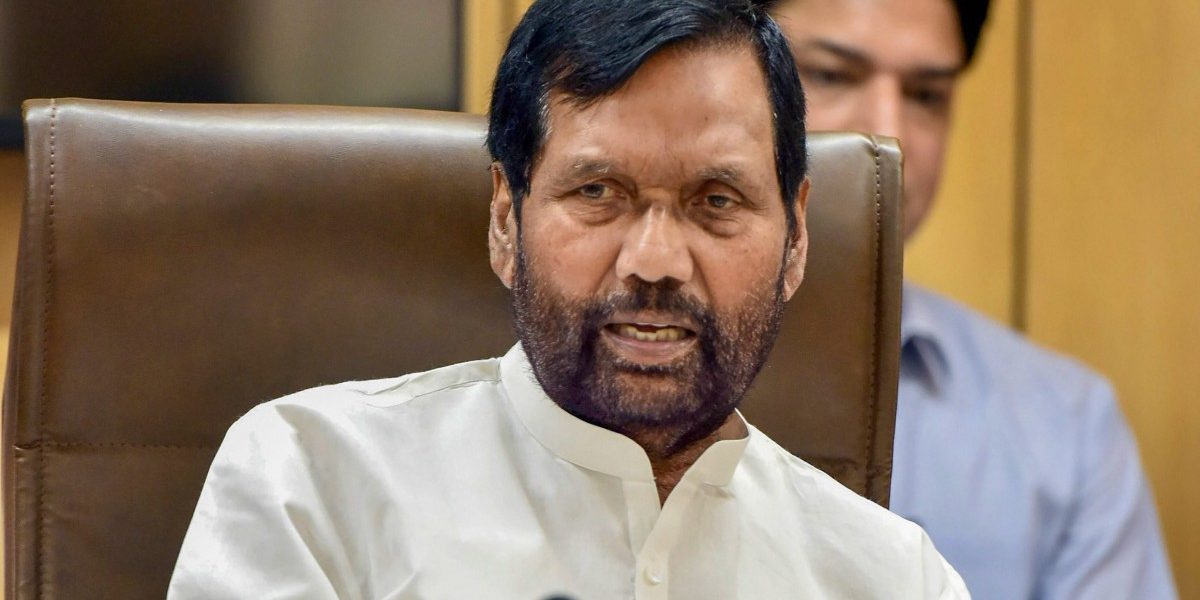 New Delhi: During the last three months of varying degrees of restrictions on movement and economic activity, one of the biggest challenges faced by the Indian government – apart from the public health challenge posed by COVID-19 – has been to ensure food security for India’s population – millions of whom have had their incomes wiped out or drastically reduced leading to a curtailed ability to afford food.

The government’s key measure to deal with the situation was the announcement that for the months of April, May and June, about 800 million beneficiaries of the National Food Security Act (NFSA) would be provided five kilograms of food grain (wheat or rice) in addition to the usual allocation of five kilograms per person through the public distribution system (PDS) free of charge. In addition, the Centre said, each ration card holding family would also be provided one kilogram of pulses per month.

The Union ministry in charge of these operations is the Ministry for Consumer Affairs, Food and Public Distribution (MCFPD) headed by Ram Vilas Paswan. The Wire interviewed Paswan over email on the challenge faced by his ministry in the last three months, delays in distribution of food and his views on extending the additional allocation of food grain and pulses as the initial period comes to an end in June.

The responses have been translated from Hindi and lightly edited for clarity.

In your assessment, how successfully has the ministry been able to deal with the challenge of providing additional food grains and pulses under the Pradhan Mantri Garib Kalyan package (PMGKP), particularly in the context of supply chain disruptions due to the lockdown?

During COVID-19, my ministry was entrusted with a huge responsibility. We had to provide adequate quantity of food grains and pulses all over the country under the NFSA [National Food Security Act] and PMGKAY [Pradhan Mantri Garib Kalyan Ann Yojana] so that there is no shortage of food in any corner of the country.

I have great satisfaction in saying that the Food Corporation of India (FCI) and NAFED [National Agricultural Cooperative Marketing Federation of India] have fulfilled this responsibility with dedication. So far, 134.93 lakh metric tonnes (LMT) of grains [under PMGKAY and the Atmanirbhar Bharat package] have been lifted and transported through 4,819 rail rakes across the country during the lockdown. We also used helicopters and water vessels to deliver food to remote areas.

The FCI transported a total of 273 LMT of grains [under the Atmanirbhar Bharat package, NFSA and PMGKAY] by rail, road, air and water to various parts of the country during lockdown. This is more than double the amount that is transported during normal times. About one lakh employees and workers of FCI have been engaged in this effort which ensured that food grains reached more than 80 crore beneficiaries. Apart from this, the FCI also fulfilled demands made by state governments and non-governmental organisations (NGOS).

During the lockdown, the challenge was to deliver food to every person in every corner of the country. Also, the amount of food grains provided to eligible beneficiaries under NFSA and other welfare schemes was doubled, as under the PMGKAY and the Atmanirbhar package announced by the prime minister, every individual was to be provided an additional five kilograms of food grain. We accepted this challenge and also completed it efficiently.

We have sufficient stocks to ensure food security for the whole country. To date 816.49 LMT food grains are available with the Food Corporation of India and procurement is underway. And like I said so far, 273 LMT grains have been transported across the country. Therefore, I am confident that we will ensure the food security of the entire country.

There have been some delays – for instance 200 million did not get their due in April – in distribution of additional food grains and pulses under PMGKP in the last three months. What have been the reasons?

The government changed the Open Market Sales Scheme (OMSS) policy during the lockdown. Now state governments and NGOs running relief camps or other self-help institutions can buy wheat at Rs 21 per kg and rice at Rs 22 per kg directly from FCI. Under OMSS, 5.67 LMT wheat and 9.89 LMT rice have been sold so far by the FCI. NGOs and other voluntary institutions have purchased 1,198 MT of wheat and 9,373 MT of rice.

You are aware that the outbreak of the coronavirus epidemic is increasing in the country. The government has announced relief measures for this in the past and even in the future appropriate decisions will be taken by the government as will be necessary in due course. Eleven states have demanded that the PMGKAY be extended by three months. The government will review the circumstances and take a decision on this.

In April, the government announced that it has allowed the conversion of surplus rice into ethanol for making alcohol-based hand sanitiser. What quantities of rice will be allocated for this purpose and at what price? In your opinion, should the government be undertaking this exercise at a time when millions of people could be pushed into poverty and food insecurity due to loss of livelihood due to the lockdown?

As I mentioned earlier, we have sufficient stocks of food grains for two years to ensure food security for the whole country. Apart from this, procurement of food grains is ongoing. In today’s situation, every person needs protection from the coronavirus infection. Please change this thought process that sanitiser is only for the rich. The government’s intention is that sanitiser should be easily available for every person.

For this, it is necessary to increase the production of sanitisers. When you are yourself saying that the rice is surplus, then how will the poor be short of rice? It is the responsibility of the government to provide food to each and every citizen, so it is also the responsibility of the government to protect them from infection.

Under this scheme, the work of identifying those in need and distributing food to them is ongoing in all states.

How has your ministry performed in the last three months? What have been some areas where you are particularly proud of the performance? And in which areas could you have done better?

In March, when the risk of the coronavirus infection started increasing in the country, to prevent its spread the prime minister announced a lockdown in the entire country from March 24. All commercial establishments, factories and construction work came to a standstill. In this situation, crores of poor and daily wage earners faced the problem of arranging food for the family.

In view of the seriousness of the situation, the prime minister immediately announced the Pradhan Mantri Garib Kalyan Anna Yojana in which provision was made to provide 81 crore poor beneficiaries of the NFSA with 5 kg of food grains per person for three months and one kg of pulses per family per month for free. There was no shortage of food grains in the government’s granaries, but the biggest challenge was to ensure that food grains and pulses reach every corner of the country as soon as possible and in particular that 120 lakh tonnes of food grain are transported.

Listen: How Bad Is India’s Hunger Problem Right Now and What Can Be Done?

The FCI took up this challenge and more than one lakh of its workers started working day and night on war footing even as they themselves faced the threat of infection. A war room was set up at the headquarters in Delhi, nodal officers were appointed in every state, and setting an example of incredible management the work of washing of grains began in over 2,000 FCI warehouses spread across the country.

By rail, road, sea and air, the grain started reaching every corner of the country including remote and inaccessible areas. Due to this unprecedented campaign of the FCI, timely supply of food grains was ensured to people and there was no shortage of food grains in any corner of the country. Never before has such a huge exercise been done with such success in any part of the world. It is certainly a matter of pride for us.

Read this interview in Hindi here.