Sunlight, Smoke and Mirrors: What’s Up With Scientists Overengineering the Ram Temple?

There is reason to be angry about the government enlisting scientists to build a complicated gizmo for the Ayodhya temple, but the issues of concern run deeper – into questions of freedom and funding. 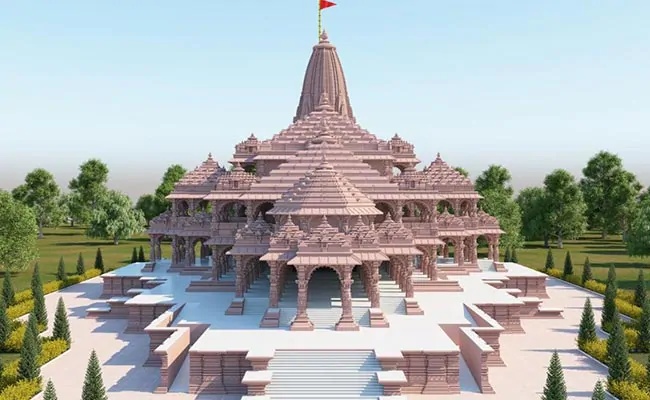 The design for the Ram Temple in Ayodhya.

On November 20, the Council of Scientific and Industrial Research (CSIR) tweeted via its official handle about a project involving researchers from one of its 38 constituent laboratories: using a system of mirrors and lenses to ensure sunlight falls on the forehead of the Ram statue being erected at the temple under construction in Ayodhya on Ram Navami every year.

The announcement prompted controversy. Trinamool MP Mahua Moitra tweeted on November 21 that a senior scientist had told her that they were “embarrassed to identify [themselves] as a scientist”. On November 22, a small group of scientists published an open letter protesting the involvement of the scientists in the project and asking them to clarify their roles in it. By November 23 morning, the total list of signatories was nearly 200.

The government had enlisted the help of the Central Building Research Institute (CBRI), Roorkee, a CSIR facility, to ensure the “Sun’s rays will fall on Ramlala’s head in Ram Mandir on Ram Navami 2024”. The CBRI’s solution is an apparatus of mirrors, lenses and motors to track the path of the Sun in the sky and to reflect and focus the incident sunlight on the idol. The principal challenge is to predict the Sun’s position in the sky on Ram Navami, whose date is determined by both lunar and solar calendars, entailing more complex calculations than if engineers had to work based on the solar calendar alone.

The Telegraph quoted an unnamed person “involved in the project” as saying the CBRI had also roped in researchers from the Indian Institute of Astrophysics (IIA), Bengaluru, and the Inter-University Centre for Astronomy and Astrophysics (IUCAA), Pune.

Should scientists get involved?

When non-scientists ask if some work is the best use of scientists’ time and/or of taxes, the presumption is that there is some better use to which the money and time can be applied. But what exactly is that? Most of us (non-scientists) would be hard-pressed for answers. This question raises two more. One: Do the people at large get to decide what scientists should work on? Answering “yes” would be a recipe for disaster. Surely only scientists can decide that, in consultation with their colleagues/peers, policymakers/funders and, if they are government scientists, lawmakers, too.

Also read: Thanks to the Ayodhya Judgment, Faith Rather Than Fact is Driving India’s Courts

(On a related note, the fixation on ‘taxpayer funds’ seems precarious. It’s okay to want to have a say in how the government spends tax money – but the best way we have that say is through political engagement, not isolated demands to spend some money on something else.)

Moreover, are we aware of what our scientists are working on most, if not all, of the time? Most of us are not. This isn’t a suggestion to make the perfect the enemy of the good but to reconsider the assumption that a CSIR facility being roped in to work on allegedly ‘inappropriate’ work is an outlier in a sea of ‘appropriate’ work. We will all benefit if we take more interest more of the time on what scientists at our publicly funded research centres are working on.

The group of scientists also wrote in its statement, “The [CBRI’s] chosen approach doesn’t advance our scientific or technological understanding in any way. Engineering such a device may be a good learning exercise for an undergraduate student, but researchers are expected to focus on quests which advance human knowledge.”

This is a curious position for a couple of reasons. First, the CSIR’s foundational premise was not to advance human knowledge but to apply scientific knowledge to advance industry. The CBRI, for example, also undertakes work at the behest of external sponsoring agencies. In 2021-2022, it was hired separately by C.B. Sompura, the architect, and by Larsen & Toubro to inspect the structural characteristics and integrity of the temple’s construction. The temple is likely to be visited by thousands of pilgrims in future, and while the institute may not be advancing human knowledge here, its involvement in ascertaining the pilgrims’ safety is surely a good thing.

More broadly, and this is the second issue, scientists as well as non-scientists deeming some work to be more appropriate than others for non-science reasons is an elitist approach to the application of critical thinking that we can do without. It should be applied to what each scientist and engineer deems fit, and they should have the freedom to make or decline these decisions keeping both their interests and the public interest in mind. It’s a different matter, of course,  if the CBRI scientists, and those from IIA and IUCAA, were press-ganged into the Ram temple project.

The group of scientists also decried the “criminal waste of … public money” at a time when “younger science researchers are facing horrendous and demoralising delays in disbursement of their allocated research grants and fellowships”. As a criticism of priorities and as a reminder to the government to act as decisively as it has in the temple matter, the group’s statement is spot on. But there is also an assumption here that money not spent on one activity will automatically be available for another.

Young research scholars are not being paid not because there isn’t money but because the government hasn’t prioritised them. Consider the lopsided distribution of the 0.69% of GDP that the government has been allocating for R&D for many years now. One analysis found that in 2014, two-thirds of the government’s R&D expenses were incurred by just three departments: defence R&D, space and atomic energy. ICAR, CSIR, DST, DBT and ICMR made do with the rest. This distribution hasn’t changed much since.

Also read: The Cross-Roads Indian Science Is Facing Have Changed in the Last 75 Years

More money doesn’t mean more money for everything. The CSIR accounted for only 9.5% in 2014 – a figure that dropped further since the ill-conceived ‘Dehradun declaration’ in 2015. In 2017, it was almost bankrupt. In 2018, it received a feeble 3.3% raise in the Union budget, while the defence R&D budget was hiked by 29%.

Underfunding creates a situation in which scientists are forced to make do with the resources the government avails to them, and the popular idea is that they need to use those resources judiciously. But what is judicious? The problem here is not that the CBRI folks are choosing to spend presumably what little they have on “trivial pursuits” but that the CSIR as a whole, and other departments that support research, are underfunded.

When oversolving serves a purpose

All this is one side of the coin. The other side has to do with the government itself.

As the group of scientists noted in their letter, the solution CBRI et al. have devised is overengineered – but perhaps that is the point. Imagine the mechanism, if and when it is set up and becomes operational, at the temple, surrounded by Nagara architecture, prayers, a surfeit of Hindu symbolism and an unmistakable expression of political power.

At the Ayodhya Ram temple, a device to track a star and focus its light on the deity’s head will be as much a gimmick as a symbol of the Hindutva programme having successfully subsumed scientific thinking and labour and natural forces to its ends. (It has already done this in a small way by having the @CSIR_IND Twitter handle tweet an image of the planned temple and a Zee News link to CBRI’s planned solution. The tweet had been deleted when the author checked at 12:45 pm on November 23. A cached version of the timeline is available to view here.)

Compare this to the group’s alternative – to have someone at the temple simply point the machine’s lenses at the Sun on Ram Navami day. It’s hard to imagine the BJP governments of Uttar Pradesh and of India being okay with such a simple contraption, one that neither evokes the temple’s modern character, which they can combine favourably with their claims of ancient Indian supremacy, nor which contributes to what the temple itself stands for: sophistry masquerading as sophistication.

The national government made its priorities vis-à-vis the temple just as clear when the environment ministry decided to denotify a part of a wildlife sanctuary in Rajasthan for pink sandstone to be mined for the temple, and ‘compensate’ by adding forest blocks in another area.

The entire incident, from the government roping in the CBRI to the overengineered solution, is reminiscent of the fact that the current Indian government’s compass is aligned not along doing what is right by the constitution but along whatever will keep it in power. It has achieved that by, among other things, making some lines of scientific and technological inquiry more lucrative than others and harnessing the knowledge and, increasingly of late, the reputation of research establishments.

In this milieu, criticising the problems that scientists are choosing (again, if they did have a choice) to work on would miss the mark – which is that the Indian government’s actions here are in line with its conduct since 2014, where its treatment of science as well as of temples has been motivated by a common vision: drain the well, then poison what’s left.