Many regional parties united to oppose the Bill in the upper house, but it passed comfortably.

Congress MPs walk out amid voting on the Government of National Capital Territory of Delhi (Amendment) Bill in the Rajya Sabha, New Delhi, March 24, 2021. Photo: RSTV screengrab via PTI

New Delhi: Parliament on Wednesday approved a Bill giving primacy to Delhi’s Lieutenant Governor (LG) over the elected government, with the Rajya Sabha passing it amidst an uproar from some opposition parties and some others walking out of the house.

Delhi chief minister Arvind Kejriwal termed the development as a “sad day for Indian democracy” and said his Aam Aadmi Party (AAP) will fight to restore power to the citizens of the National Capital Territory.

Even as 12 parties united to oppose the Government of National Capital Territory of Delhi (Amendment) Bill, 2021, the Rajya Sabha passed it by voice vote.

Reporting on the developments in the Rajya Sabha, the Indian Express said the Bill “became a rallying point for the entire opposition” and saw regional parties uniting in a “rare pushback against what they called an overweening Centre”.

AAP said it is planning to approach the Supreme Court against the legislation, alleging it was an “unconstitutional” attempt to make the Delhi government “administratively impotent” by a political party that has been made “electorally impotent” by the people of the national capital.

The Bill which seeks to make it clear that the “government” in Delhi means the “Lieutenant Governor”, was passed by the Lok Sabha on March 22.

Rajya Sabha members of Congress, Trinamool Congress, Shiv Sena, DMK and other opposition parties also termed the Bill as “unconstitutional” and claimed that it will fail judicial scrutiny. They demanded that it be examined by a Select Committee.

The upper house witnessed two brief adjournments as opposition members trooped into the well and shouted slogans against the Centre. Marshals were called in and formed a protective ring around the chair as well as Union minister of state for home affairs G, Kishan Reddy, who moved the Bill for further consideration. The members of the Biju Janata Dal, Samajwadi Party and the YSR Congress walked out of the House.

Also Read: Centre’s Delhi Amendment Bill is at Odds With Supreme Court’s Ruling and the Constitution

During the debate, Congress MP Abhishek Manu Singhvi tore into the proposed legislation, dubbing it as the “most unconstitutional Bill” the house has ever received. He said even the Delhi unit of the BJP should “join us in opposing this”.

“Make no mistake friends this is not about AAP, or Congress or BJP. It’s about the fundamentals of federalism,” he said, and alleged the current regime at the Centre was walking a path of “coercive federalism”.

Defending the Bill, Kishan Reddy asserted that the amendments have been brought to address “certain ambiguities” in the 1991 law and denied allegations that it was an attempt to usurp the powers of the elected government.

AAP MP Sanjay Singh took a jibe at the BJP, saying the Bill has been brought as the party lost assembly elections twice in the national capital.

“I am seeking justice for two crore citizens of Delhi and for 130 crore Indians. I am standing here to save the constitution of India,” he said. A notice moved by Singh regarding the Bill was not approved by the chair.

A division was sought by the opposition when the government moved the Bill for consideration in the upper house on Wednesday. During voting, 83 members were in favour while 45 opposed it. Just before the passage of the Bill, the Congress also walked out of the house. 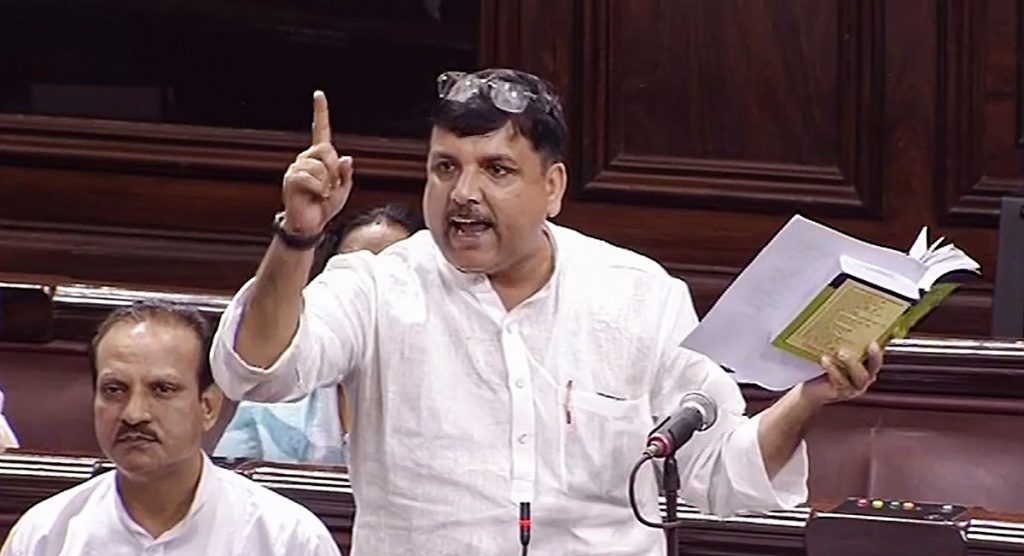 What the Bill says

According to the statement of objects and reasons of the Bill, to give effect to the interpretation made by the Supreme Court which had ruled that the city government need not obtain the Lieutenant Governor’s “concurrence” of every issue of day-to-day governance, the bill has been brought.

“The said Bill will promote harmonious relations between the legislature and the executive, and further define the responsibilities of the elected government and the L-G, in line with the constitutional scheme of governance of the National Capital Territory of Delhi, as interpreted by the Supreme Court,” the statement of objects said.

Executive powers of the LG of Delhi are different from the powers of governors of the state. The Delhi assembly can make laws on all subjects in the state list and concurrent list except public order, police and land.

The Bill stated that the legislative assembly shall not make any rule to enable itself or its committees to consider the matters of the day-to-day administration of the national capital or conduct inquiries in relation to the administrative decisions.

“Any of the rule made in contravention of this proviso, before the commencement of the Government of National Capital Territory of Delhi (Amendment) Act, 2021, shall be void,” it said.

In June 2018, Kejriwal and his Cabinet ministers had staged a sit-in at the LG’s office as a power tussle between the then lieutenant governor and the AAP government had intensified. The Supreme Court had in July 2018 ruled that the LG cannot interfere in every decision of the Delhi government and that he must act on the aid and advice of the council of ministers.