Forget Your Rights and Do Your Duties: Modi's 'Kartavyapath' is a Road Paved With Bad Intentions

In his August 15 speech, Prime Minister Modi sidestepped demands on the government to deliver on its promises and instead laid great emphasis on citizens fulfilling their duties. The Orwellian new name for Delhi's Rajpath adds to this push.

New Delhi: The latest target for the Bharatiya Janata Party’s renaming zeal is Rajpath, with the government deciding to call the iconic stretch which runs from Rashtrapati Bhavan down to India Gate ‘Kartavyapath’, or duty road.

The renaming of the road – which is paved with bad intentions – is not just a cartographic act. When it is formally inaugurated by Prime Minister Narendra Modi on September 8 to mark the completion of the first stage of his government’s controversial Central Vista makeover project, the speech he delivers will make the agenda clear.

Just before that, the unelected New Delhi Municipal Council that is packed full of BJP members has been asked to convene a special meeting for September 7 so that the renaming proposal can be duly rubber stamped.

Known as Kingsway during British rule, the road was renamed Rajpath, or State Road, after independence. Together with Janpath, or People’s Road – formerly known as Queensway – which bisects it in the middle, the two avenues defined in cartographic terms the new republic’s social contract in which sovereignty now vested in its citizens. These sovereign citizens reclaimed the Central Vista that was framed by these central axes as their own. On its vast greens they congregated at will to picnic, play, walk and eat ice cream at all times of the day and night, restrained not by some official diktat or boundary but mostly by the vagaries of the weather or the availability of transport. All of that now comes to an end. Duty Road has little room for free citizens.

In his Independence Day speech last month, Prime Minister Modi sidestepped growing demands on the government to fulfil its end of the social contract and instead laid great emphasis on people fulfilling their duties. Exhorting citizens to be dutiful is a staple of authoritarian statecraft and was first enshrined in the Indian constitution by Indira Gandhi during the Emergency. Since then, governments which have faced criticism for disregarding the rights of the people have frequently resorted to reiterating the importance of duties. The renaming of Rajpath as ‘Kartavyapath’, or ‘Duty Road’, represents a further symbolic escalation of the official attempt to emphasise duties over rights. That this naamkaran is to be accompanied by a shuddhikaran, or cleansing, of sorts in which ice cream vendors will be restrained from plying their carts and picnics will be forbidden on the greens still available for people to access should hardly surprise us.

The renaming itself is not without a sinister dimension. Rights in a democratic polity are, in the final analysis, a claim against the state which is constitutionally enjoined to ensure citizens are not deprived of them. The name ‘Rajpath’ could thus be seen as a symbolic reminder of the fact that the state and its institutions which were located alongside it had legitimacy only to the extent to which they upheld people’s rights. On the other hand, the concerted new push to emphasise ‘duties’ – which the Orwellian ‘Kartavyapath’ symbolises –  places the burden for governance on the ordinary citizen. It lays the blame for problems at her door and deflects attention away from the responsibility of the state.

From renaming to vandalising

Of course, earlier renaming exercises also had a political agenda driving them. In 2015, Aurangzeb Road became A.P.J. Abdul Kalam Road. Hindutva fanatics have now set their sights on renaming Akbar Road and Humayun Road. Race Course Road, where the prime minister’s official residence is located, became Lok Kalyan Marg, or the road of people’s welfare, though many have questioned its appropriateness.

Teen Murti Bhavan – where the Nehru Memorial Museum and Library is located – has been rebranded ‘Pradhan Mantri Sangrahalaya’ in honour of a monstrous spaceship-shaped building erected in defiance of the country’s heritage laws which now houses the Museum of Prime Ministers. Earlier, Pragati Maidan was also witness to urban vandalism when the Modi government tore down the landmark Hall of Nations pavilion and other structures there and erected an enormous building that looks like a pile of shipping containers.

The BJP in Uttar Pradesh has changed the name of the historic city of Allahabad to Prayagraj, and more changes are on the anvil in all states where the party is in power, especially UP, Maharashtra and Madhya Pradesh. There is a more sinister undertone to the name changes there, with BJP leaders  – taking a cue from Modi’s reference in 2014 to ‘1200 years of slavery’ – equating Mughal-era or other Muslim names with ‘symbols of colonialism’.

Unnamed official sources told PTI that the renaming of Rajpath “is also a message to the ruling class that the era of rulers and subjects is over”. This claim is at odds with the growing power of the state over the lives of people in terms of food habits, freedom of expression, law enforcement, etc, not to speak of the cult of personality surrounding Prime Minister Modi which has turned even the BJP organisation into “subjects” , and the massive growth in wealth of the “ruling class” that has taken place on his watch.

Even in terms of urban design, India is unique among major democracies in providing ministers and top officials with huge bungalows in the centre of the national capital at public expense. Indeed, by planning the prime minister’s official residence atop Raisina Hill, Modi has actually reinforced the power of the “ruler” over his “subjects” in exactly the same manner as the colonial authorities had done in their vision of the capital. As Pilar Maria Guerrieri notes in her 2018 book, Negotiating Cultures: Delhi’s Architecture and Planning from 1912 to 1962, power in New Delhi radiates down from Raisina Hill:

“The arrangement of the housing followed the accepted, customary rules of power: Europeans with more prestigious and exalted roles were placed in the greatest proximity to Raisina Hill, and as the social status of the inhabitants decreased, so did their proximity to it. Indians, who did not work within the government apparatus, lived in settlements set within a rigid grid of roads at a considerable distance from Raisina Hill, and even from New Delhi itself.”

It is this spatial privilege which separates the ‘ruler’ from the ‘subject’ and defines the unequal essence of the city, not the names of roads and streets. Shown below is a 1920 plan for the distribution of bungalows in New Delhi by the city’s colonial planners. Even though the names of the roads and the colour of the occupants have since changed, the bungalows all remain. 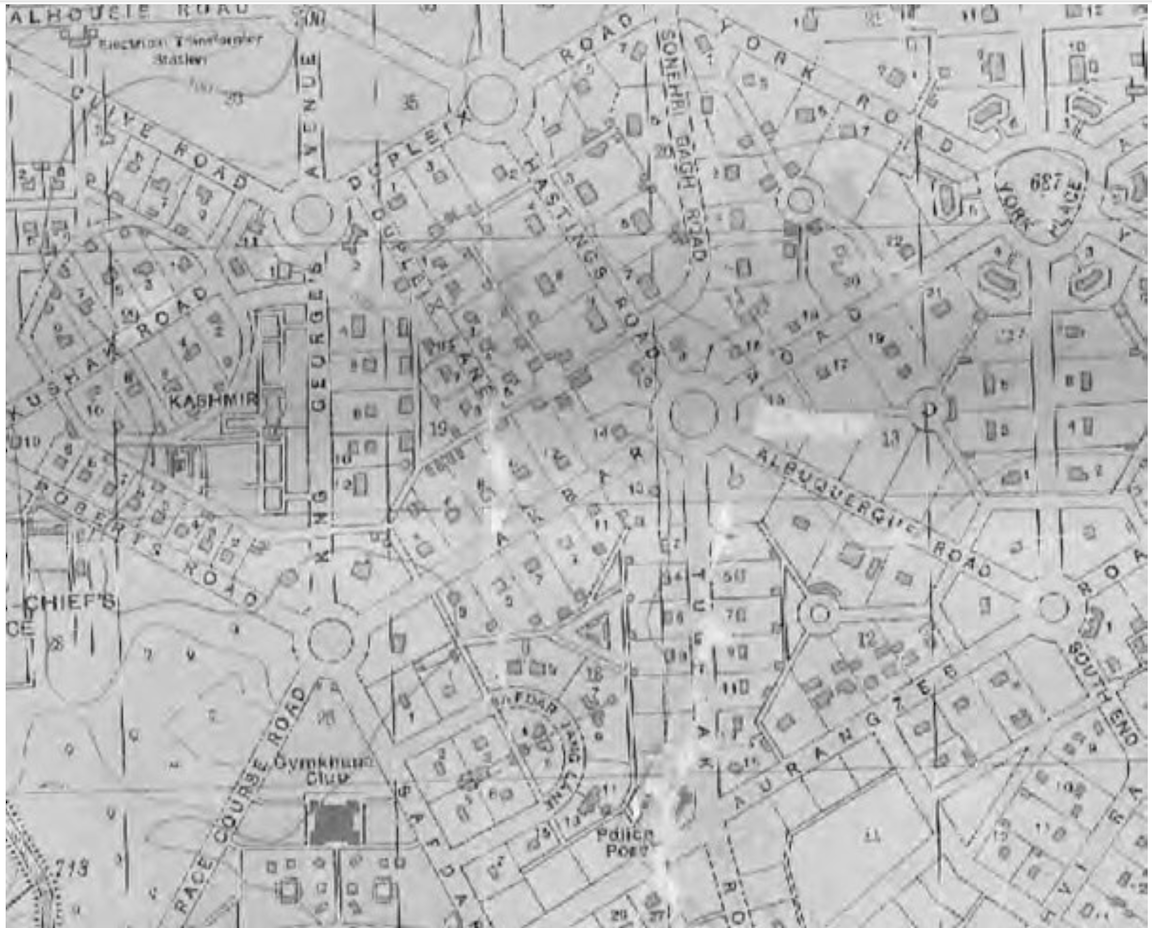 Plan that Shows the Distribution of the Bungalows in New Delhi Plan, c. 1920
Source: National Archives of India. Via Pilar Maria Guerrieri.

There is no question of Modi doing away with these ugly symbols of colonialism, asking our ministers to find their own housing (as in other democracies)  and putting the green expanse and buildings freed to more socially productive use by the “subjects”. No, all he has in mind for them is kartavya. The city is for the state and its functionaries, who will decide when, where and in what quantity the people – who have a duty to obey authority – can congregate.