16.51 lakh candidates had enrolled themselves for the Rajasthan Eligibility Exam for Teachers. 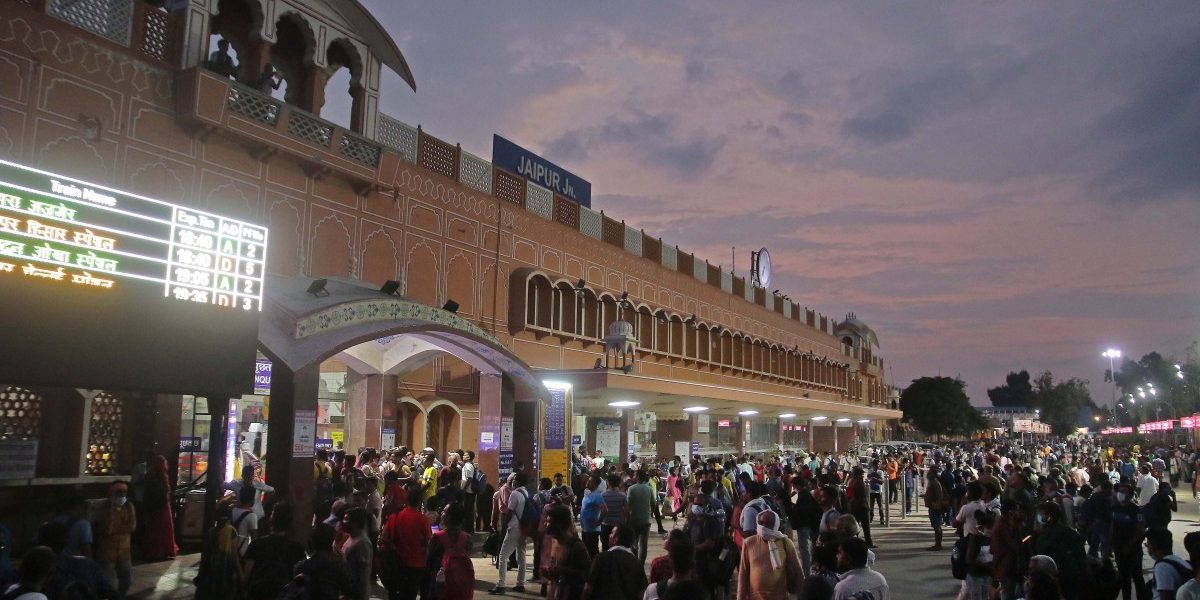 Candidates at a railway station after appearing for the Rajasthan Eligibility Exam for Teachers (REET) exam in Jaipur, Sunday, Sept. 26, 2021. Photo: PTI

New Delhi: The Rajasthan Eligibility Examination for Teachers was held across the state on Sunday amid tight security measures, including suspension of mobile internet services in some districts to prevent cheating.

Five people were arrested in Bikaner after they were allegedly found wearing slippers fitted with Bluetooth devices to resort to unfair means in the exam for the selection of teachers.

Several other dummy candidates were also arrested in different districts.

Two head constables and one constable too were suspended for their alleged involvement in facilitating the cheating by examinees.

Conducted by the Rajasthan Board of Secondary Education, the exam was held in two shifts at 3,993 centres set up across 33 districts. As many as 16.51 lakh candidates had enrolled themselves for it.

Elaborate security arrangements were in place for the exam with strict steps taken to check attempts of cheating.

Mobile internet services were suspended in many districts, including Jaipur.

On Friday, principal secretary, home, Abhay Kumar had written to the state, divisional and district officials to take a call on suspending internet services, Indian Express reported. “About 16 lakh students will participate in REET 2021 and will travel from one district to another. In such a situation, there is a possibility of deteriorating law and order situation due to fake news, rumours of accidents, paper leak, etc,” he wrote.

In Dausa and Jaipur rural, police arrested four and eight dummy candidates respectively and busted several gangs involved in cheating in Bikaner, Ajmer, Pratapgarh, Sikar, Bharatpur and Jodhpur. Cases of cheating were also detected in Sawai Madhopur where the involvement of two policemen in facilitating came to light.

Bikaner’s Superintendent of Police Priti Chandra said five people were arrested in the Gangashahar police station area for trying to cheat in the exam.

Among them, three were REET aspirants who were found wearing slippers fitted with a small calling device connected with a SIM card. A tiny, barely visible Bluetooth-enabled device was found fitted in candidates’ ears, she said.

Two of those arrested were gang members who gave the candidates slippers each costing Rs 6 lakh.

“They were caught at a bus stand before the exam. The slippers and other devices were recovered during the checking. The main accused and the gang leader identified as Tulsaram Kaler is absconding while two members of his gang were arrested,” she said.

Chandra said the police in other districts too were alerted after the arrests.

One man was held in the Jainarayan Vyas Colony police station area of Bikaner also.

Acting on the information of Bikaner police, two candidates were arrested in Pratapgarh and one each in Sikar and Ajmer.

At one exam centre in the Alwar district, candidates were angered by the delay in starting the examination in the first shift.

Bhiwadi’s Superintendent of Police Ram Moorty Joshi said the exam was delayed because the papers were not made available to the centre on time. The exam of the first shift at one centre will be conducted again, he said.

Constable Shaitanaram posted with Kalandari police station in Sirohi was suspended after he was found involved in facilitating the cheating, Sirohi SP Dharmendra said.

The action was taken after his call recording and WhatsApp chat surfaced.

In Sawai Madhopur, Head Constable Yaduveer Singh and Constable Devendra Singh were caught while facilitating the cheating. They were also suspended.