While the authorities say contractors were supposed to pay the fare, most travelling workers have paid the amount in cash.

Migrant workers line outside the Barmer railway station to board the shramik special train to Bihar. Photo: Special arrangement

Jaipur: A week ago, when Congress president Sonia Gandhi stated that the party will bear the railway charges of every stranded migrant worker, the Ashok Gehlot-led Congress government in Rajasthan also announced that it will pay the fare for workers travelling through special trains.

However, on Sunday, migrant workers travelling through the shramik special train from Rajasthan’s Barmer to Bapudham Motihari in Bihar were charged Rs 675 per worker. A day before the train’s departure, contractors and agencies had sent e-mails to the Barmer sub-divisional magistrate listing the name and payment details of migrant workers. 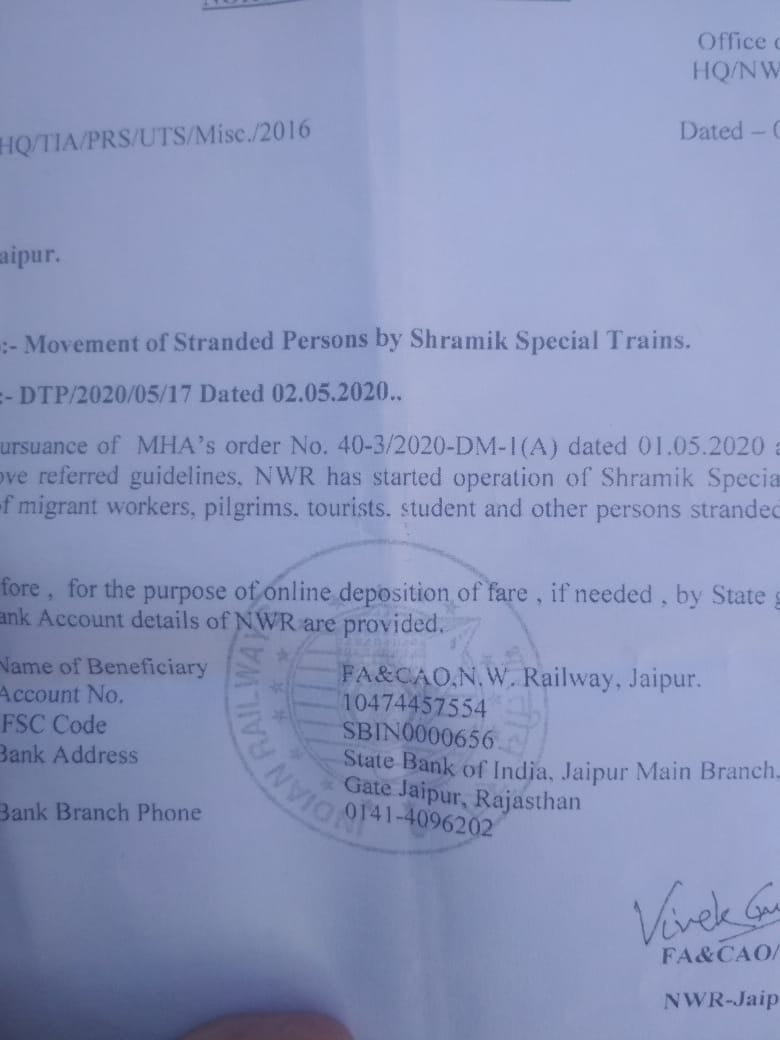 Order issued by the North Western Railway zone for online deposition of fare.

The Barmer administration is expected to have followed an order issued by the North Western Railway (NWR) zone headquartered in Jaipur, in which it shared its bank details for the online payment of fares. “For the purpose of online deposition of fare, if needed, by the state government, bank account details of NWR are provided as below,” reads the order. 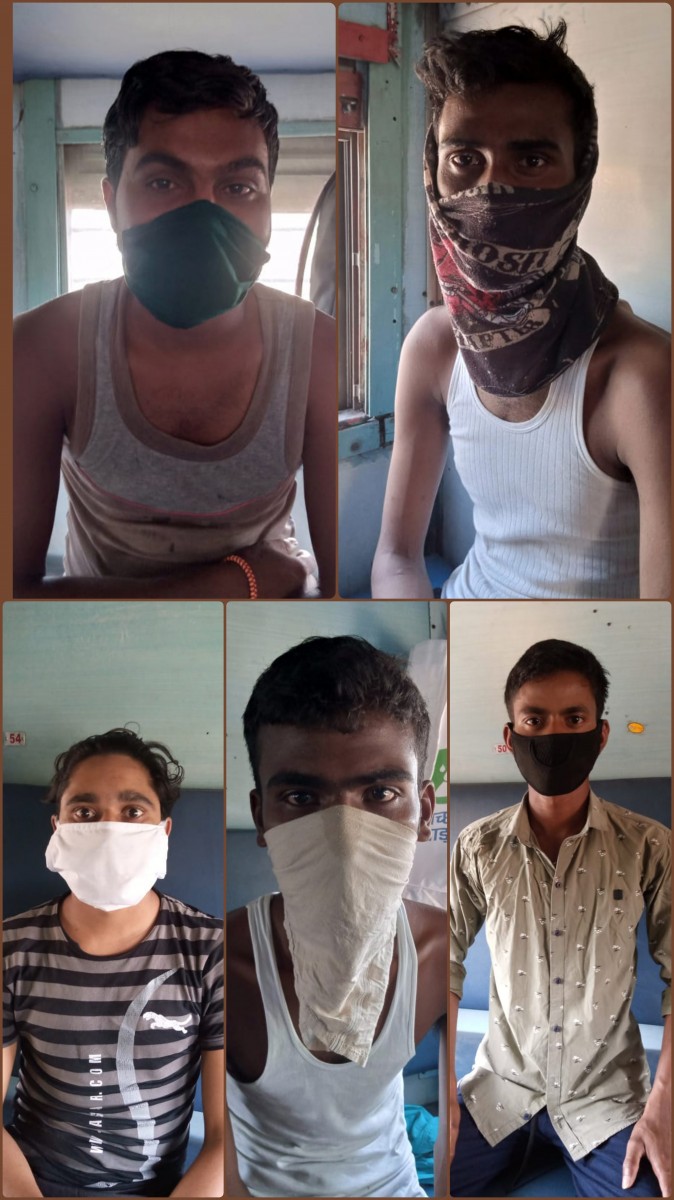 The Barmer district authorities say that this charge was sought only from contractors and companies. Speaking to The Wire, Barmer collector Vishram Meena said, “We have asked the companies, not the workers, to pay for the railway ticket. We assure you that no worker is being charged and if any company has cheated the workers, strict action will be taken against it.”

However, migrant workers travelling on the shramik special train on Sunday revealed to The Wire that most of the contractors collected Rs 675 from workers and later submitted it to the authorities.

“We had some amount left from the last salary that we had received in March, so when the contractor asked for payment of the ticket, we paid him in cash. We are sure that he has further paid it to the government, which is why we are now going home,” Ravindra Yadav, a migrant worker from Bihar who works at a petrochemical factory in Barmer, told The Wire over phone.

Yadav added that before arriving at the station, they were taken for COVID-19 testing in a bus which later dropped them to the station. This bus charged them Rs 200 in cash. “Some officials took our temperature [COVID-19 test] and then made us sit in the bus where we were asked to pay Rs 200 in cash. The bus conductor didn’t provide us any ticket,” he added.

The workers also said that their companies didn’t pay them salaries during the lockdown in April and May, despite the prime minister’s request on television to not hold anyone’s salary. “When they [companies] couldn’t pay us our salaries, then how could the government believe that they would pay for our ticket?” Nitesh Kumar, another migrant worker from Bihar, told The Wire. 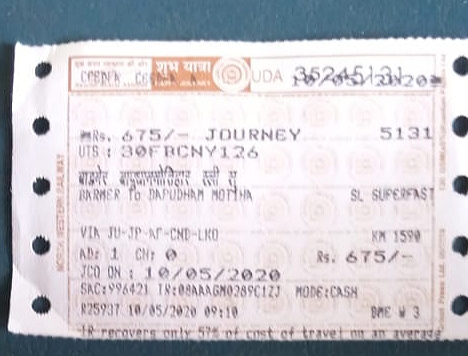 Printed ticket given to migrant workers in Barmer displaying the fare of Rs 675.

Yadav and many workers on the special train on Sunday said that the authorities gave them a printed ticket at the railway platform based on their payment confirmation. This ticket mentioned that the fare amount was Rs 675. 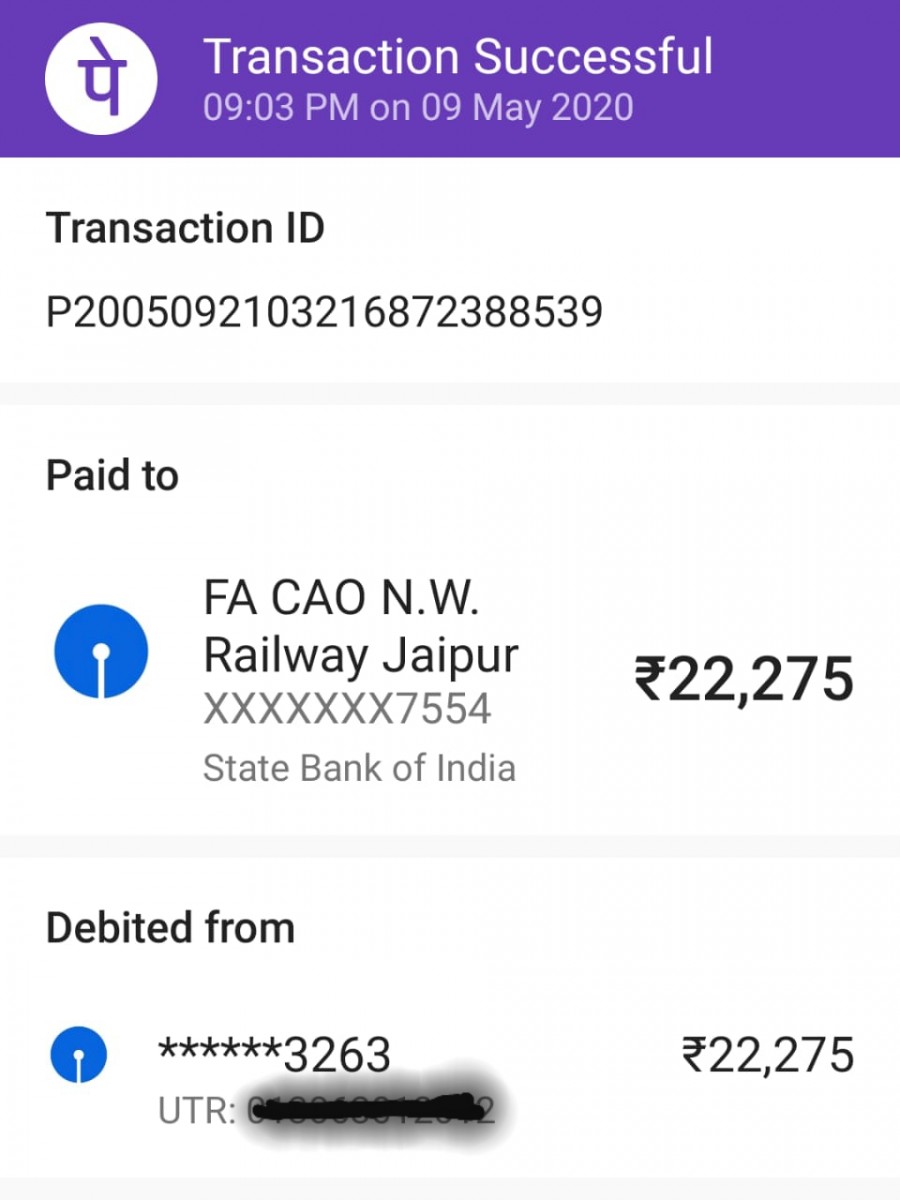 Online payment details of migrant workers to the North Western Railway zone for travelling to Bihar through special trains.

In some cases, contractors have paid for the workers – but their number is small. Nineteen migrant workers from Bihar who worked at a Plaster of Paris manufacturing unit in Barmer were able to board the shramik special train after their owner deposited Rs 12,825  (19×675) into the North Western Railway zone’s account. “The workers have been wanting to go back to their homes since the lockdown but have no means. We are happy that they will be finally with their families,” Tilok Malani, a factory owner in Barmer, told The Wire.

The Rajasthan government has made provisions for stranded citizens to register on the e-Mitra portal by providing all relevant details along with documents, or dialling +181/18001806127.

Also read: The Centre Cannot Get Away With Ignoring Migrant Workers Completely 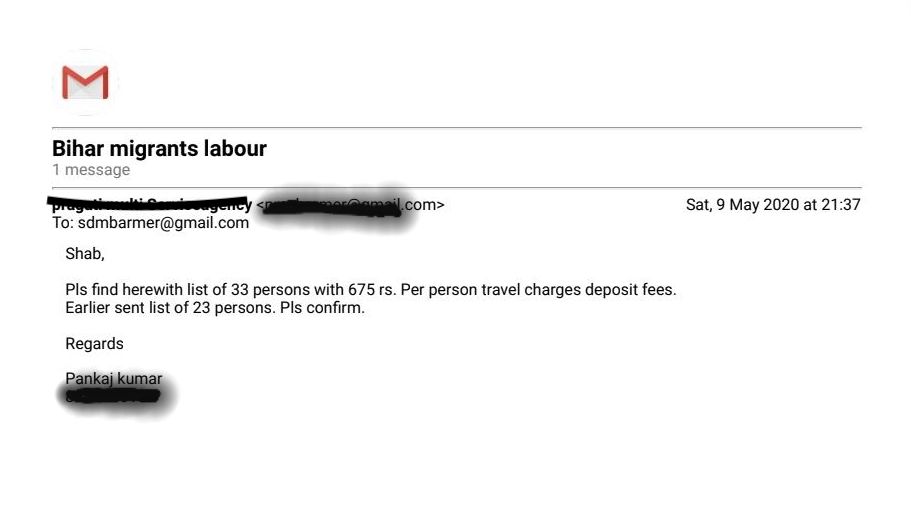 Email from the contractor to the SDM sending travel payment details of migrant workers.

The ratio of registration of workers to those being sent home is very low. Daily reports in the local media highlight how despite registration, workers are being forced to walk to their home states in desperation.